Electric cars use traction or electric motors to propel the engine. The cars may be powered via a system by the means of electricity that comes from ‘off-vehicle sources’, an electric generator, solar panel or a battery contained within the car that converts fuels to electricity. The traditional needs fuel simply because the car needs the power and it can only obtain it from the engine. Electric cars are slowly becoming popular around the globe as opposed to traditional cars.

Don't use plagiarized sources. Get your custom essay on
“ ﻿Electric Cars vs Traditional Cars ”
Get custom paper
NEW! smart matching with writer

Electric cars have advantages and demerits over traditional cars and vice versa.

The rising in technology and the need to protect our environment is constantly supporting the individuals to buy electric cars as compared to traditional cars. The use of electric improves on the battery life of the car but it Is also associated to a few drawbacks, for example, charging it for a long period time, issues on performance, high cost, limited range and the scarcity of charging stations tend to fade away.

Previous results have shown that countries like Denmark, Italy, and Belgium do differ in the way they develop positive attitudes and intentions towards the electric cars basis of their green self-identity (Barbarossa, 2015). Automotive giants are committed to converting to the production of electric cars only in the near future, as the customers are able to get affordable options. Therefore changing the public opinion that electric cars are associated with the elite.

The electric cars require low maintenance as opposed to traditional cars that require quite moderate maintenance.

This is because electric cars have very few moving parts and most of the moving part in electric cars rarely break and do not need fixing on a regular basis. For the many years to come, this will help save on money and time, no of renting cars when one’s car is being serviced or when there is a failure in transmissions. Despite all these, there are brakes that need to be maintained, but they do last longer compared to the brakes in traditional cars. The biggest issue with electric cars is changing the battery, but the newest models today comes with a battery that has a warranty of eight years. These batteries in a mild climate can be used up to fifteen years.

The charging and recharging of electric cars can be done either in a charging station or at home and the physical presence of anyone is not needed in the 0cahrgingor recharging process. But for the traditional cars, refueling and fueling can only be done in any petrol station and one needs to be physically present for the whole process to take place. For refueling processes of the electric cars, you do not change oil or even buy gas, you only need to plug in either at work, at home or on the road and charge. Electric vehicles are considered to be one of the most important ways for any country to solve a series of energy problems such as urban smog, energy supply security and turning to green development (Lin et al, 2018). The power from renewable sources gets into electric car batteries. Charging your car with non- renewable electricity can be domestically generated.

In conclusion, the generation to come will have to make a decision on whether to go with electric cars or not. Soon those with habitual doubts on technology that do criticizes over high cost, issues on performance, limited range, charging for a long period of time, and the inadequacy of the charging stations will fall upon deaf ears. We are looking for a future that will be filled with calmness and peace, we will be able to achieve this if we choose the electric cars that virtually makes no noise over the traditional cars. 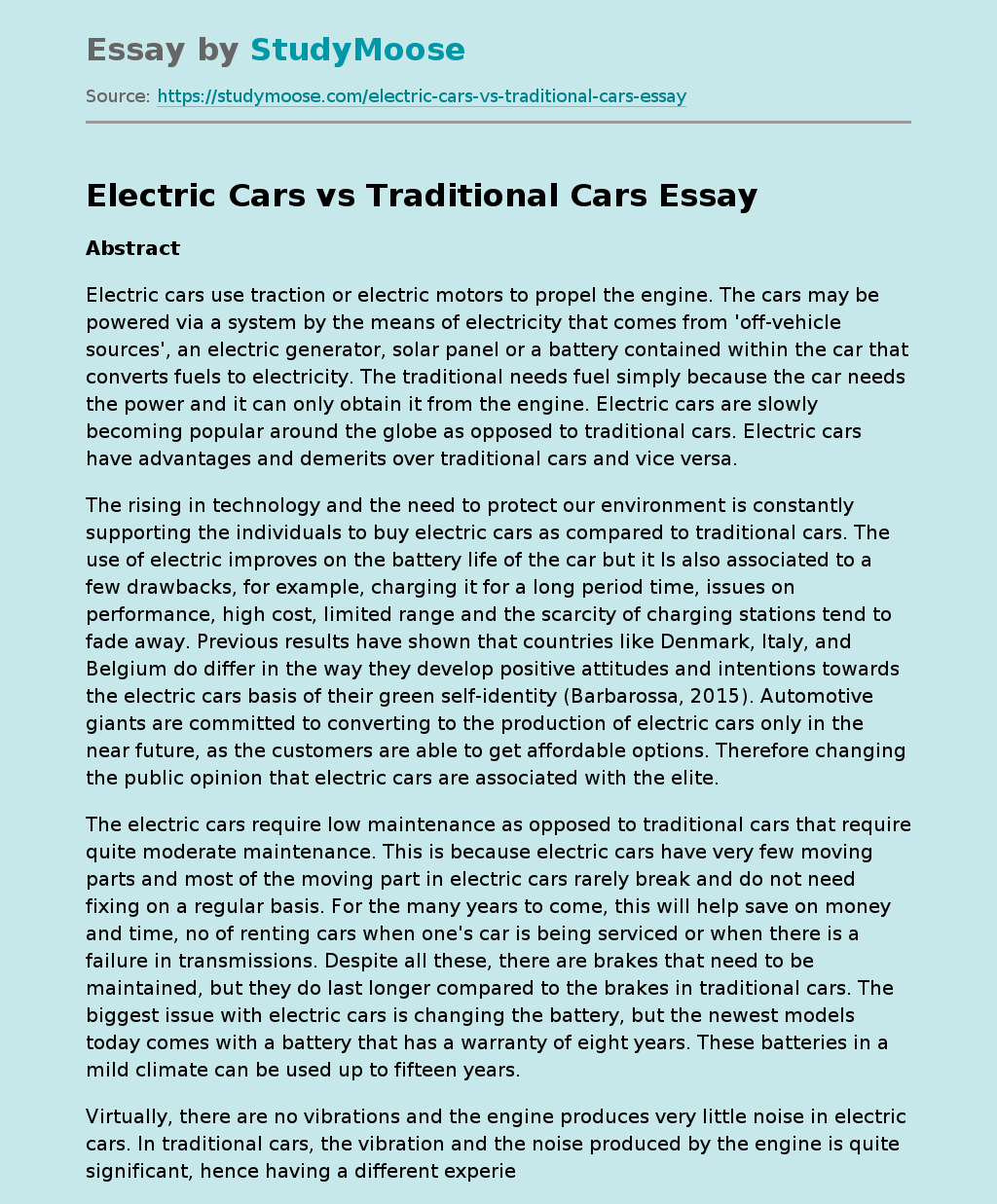