Perhaps no invention affected American everyday life in the 20th century more than the automobile (UsHistory.org, 2008). Technology for the automobiles existed in the 19th century, but it took until the 20th century for Henry Ford to make automobiles accessible to the American public. The automobile drastically changed the lives of Americans for the better, not only did it improve transportation, it also created an economic boost for them. The demand for rubber skyrocketed and road construction created thousands of jobs.

Don't use plagiarized sources.
Get Your Custom Essay on Environment pollution argument Just from $13,9/Page

State and local governments began funding highway designs and the federal government became involved with the Federal Highway Act of 1921 (UsHistory.org, 2008). This act required each state to designate a system of state highways not to exceed seven percent of the total highway mileage in each state. Gas stations began to appear and mechanics could earn a living by fixing the inescapable problems with automobiles. Obviously two well established industries, oil and steel, received a serious boost by the demand of automobiles.

People could travel longer distances causing the need for motels, fast food places, and diners. In the beginning, automobiles made life better for humans, but with the growing number, environmental issues began to appear. In this unperfected world, the combustion process caused by automobile engines emits several types of pollutants.

The exhaust from automobiles is generated by the chemical and mechanical process that occurs in order for a vehicle to work, this exhaust is what pollutes the air. Exhaust pollutants include hydrocarbons, nitrogen oxides, carbon monoxide, and carbon dioxide. Smog is a word formed by smoke and fog. The leading cause of smog comes from the releasing of pollutants in the air from gasoline and diesel-run vehicles, industrial plants and activities, and heating due to human activities. Burning gasoline in automobiles releases carbon dioxide, which is the largest source of greenhouse gas emissions in the United States (Conserve Energy Future, 2013). Increased heat in the atmosphere causes ecosystems and weather patterns to change, such as the rise of sea levels and affects rainfall patterns. Humans can experience short term and long term affects due to exposure of air pollution. Short term effects, usually are temporary, can range from nausea to bronchitis. While long term effects can include heart disease and lung cancer leading to death. In 1952, over 3,000 people died in what became known as London’s “Killer Fog.” The smog was so thick that buses could not run without guides walking ahead of them carrying lanterns (United States Environmental Protection Agency, 2012).

Events like this alerted humans of the threats air pollution poses to human health. In 1963 several federal and state laws were passed including the original Clean Air Act, this produced funding to study the effects and help clean up air pollution. In 1970 Congress passed a stronger Clean Air Act and created the Environmental Protection Agency, known as the EPA. Again in 1990 Congress expanded the Clean Air Act, which gave the EPA more authority to implement regulations lowering pollutant emissions. Worldwide, many countries have taken steps to reduce or limit greenhouse gas emissions to combat global warming. The Kyoto Protocol, first adopted in Kyoto, Japan, in 1997, is an agreement between 183 countries that they will work to reduce their carbon dioxide emissions. The United States has not signed that treaty (National Geographic Education, 1996) . Along with human health, automobiles pose a threat to the environment in ways of global warming, water pollution, and acid rain. Global warming is affected by the greenhouse gases, like carbon dioxide, which are emitted through automobile exhaust. Vehicles require fluids like motor oil, antifreeze, gasoline, and refrigerants.

These fluids are easily leaked from a vehicle or can be disposed of improperly and can end up in aquatic ecosystems. When rain occurs it washes everything on the ground, including leaked car fluids, into sewage drains that lead into our oceans and other aquatic ecosystems. Automobile fluids are toxic to animals affecting their immune and respiratory systems. Acid rain changes the PH balance of waterways and can harm the organisms that rely on them. The nitrogen and sulfer oxides that are released from automobiles are major contributors to acid rain. Electrical motors date back to the 1800’s, with steam and combustion engines being attempted by the 1900’s, and it was undecided which engine would power the automobile. At first the electrical motor was the most popular, but the battery life was short and would not allow travel over long distances. As mentioned earlier, Henry Ford introduced a combustion engine that rejected the idea of an electrical motor. In the late 1960’s automobile manufacturers noticed concerns of the growing oil crisis and emissions of gasoline powered vehicles causing them to add electric cars into their line ups. By the 1990’s consumers were converting to electric powered automobiles because awareness of dependency on foreign oil and environmental issues were becoming more knowledgeable.

Automobile manufacturers were making electric cars a larger part of their line ups. Modern day consumers have a choice between electric cars and hybrid cars as an alternative choice to gasoline powered engines. Recent electric cars are comparable to gasoline powered engines in terms of speed and travel distance due to recharging stations along the way. Electric cars are nonpolluting, however still have an environmental cost because the recharging of their batteries is done by burning fossil fuels. According to the Electrical Vehicle Association of Canada, even batteries recharged by coal-powered electric generators cut carbon emission roughly in half (Lampton, 1998) Hybrid cars are appealing to consumers who feel limited by electric cars. These cars have a traditional engine and a bank of rechargeable batteries that charge while the car is running.

Limited demands of power, like driving around town, uses the charged batteries while high demand of power, like freeway driving, uses the gasoline engine. Although hybrid cars are low polluting, they still have some environmental issues of emissions as gasoline powered engines. The future for humans depends on what they are doing and consuming today. Fossil fuels are eventually going to be depleted and the sooner the dependency is lifted, the longer humans can make them last. Global warming is going to occur, but causing the release of carbon dioxide into the air through the burning of gasoline is only going to make it happen faster. Human health issues regarding air pollution are going to continue to get worse, death is already happening and those numbers are going to continue to rise. Humans depend on automobiles as their primary mode of transportation, but carpooling or public transportation would lessen their carbon footprint. If everyone just did one thing a day to help the environment, maybe they could help sustainability of the Earth. 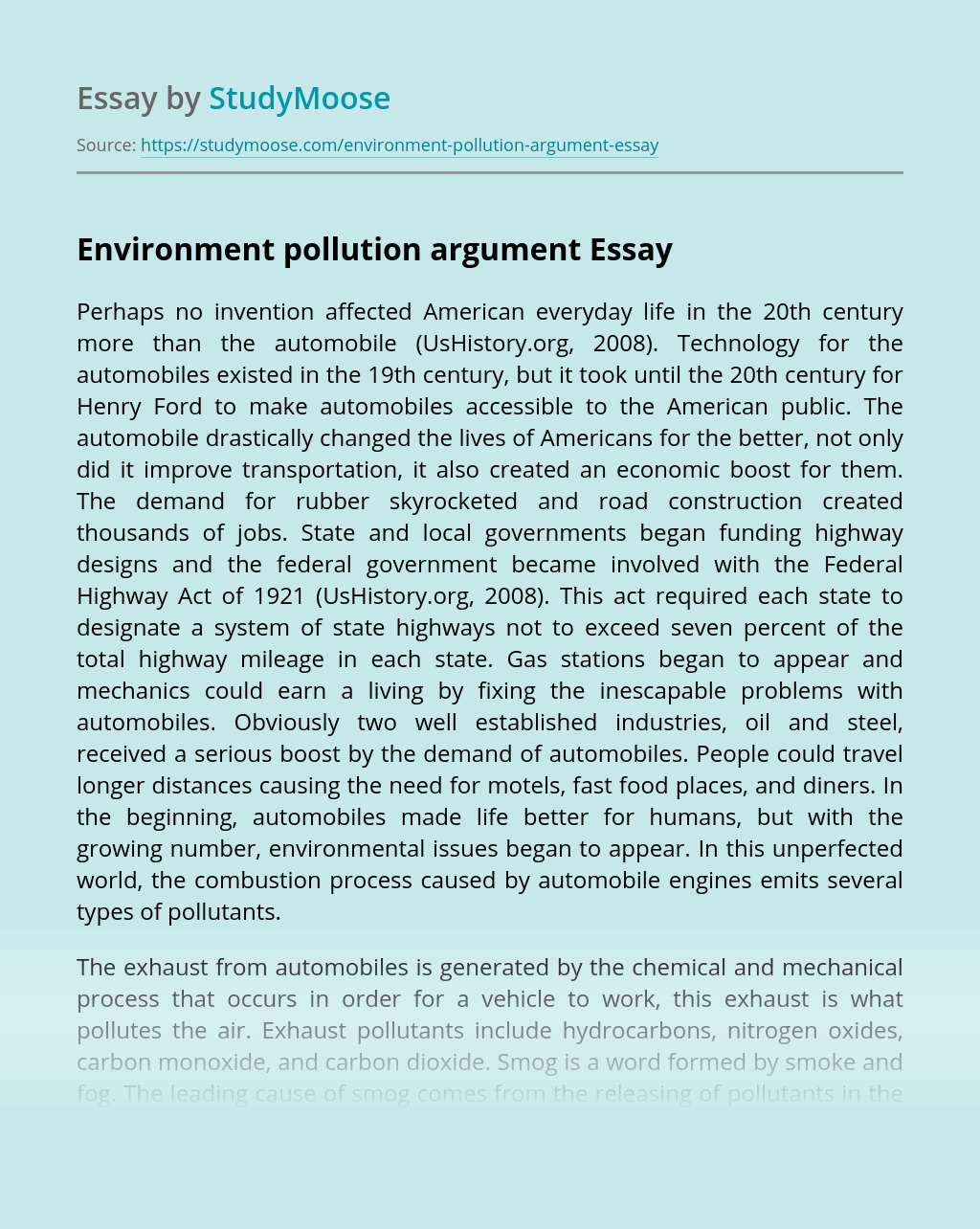 1: ABSTRACT The invention of transistor made it possible for the very first use of radiometry capsules, which utilized simple circuits for the internal study of the gastro-intestinal (GI) tract. They could not be utilized as they might transfer only from a single channel and also due to the size of the components. They likewise... VIEW ESSAY

“Apple designs Macs, the best personal computers in the world, along with OS X, iLife, iWork and professional software. Apple leads the digital music revolution with its iPods and iTunes online store. Apple has reinvented the mobile phone with its revolutionary iPhone and App Store, and has recently introduced iPad 2 which is defining the... VIEW ESSAY

We all can understand that there is no “I” in “team” but how many of us can honestly say we know the significance and appreciation of a team. Forever Strong is a sports drama inspired by actual events. We are introduced to a troubled rugby player, Rick, who injuries himself and his girlfriend driving drunk... VIEW ESSAY

Just fifty years ago, it would have been unimaginable the wealth of shared knowledge and experiences that modern technology has made possible. For all of its beauty and brilliance in constant conflict with its wicked ugliness, the mass media that has flourished from this technological boom reflects life in its most honest form. It is... VIEW ESSAY

Some of you may remember back in 5th grade the D.A.R.E song. You know the song about staying away from drugs and making your own choices. Come on! It had little dance moves that went along with the words. Well if you don’t remember, heres an example of the Chapman Elementary school in Dublin Ohio... VIEW ESSAY