‘POLLUTION’, the most commonly used word in our everyday life relating to the destruction of the natural air we breathe, the water we drink and the land we live on. No doubt the world is rapidly developing in every area possible which makes our lives much easier to live but on the other hand forgetting that we ourselves are destroying the natural resources. Many environmental researches have proved that it is because of the rapid growth in technology and other areas of growth that leads to a massive increase the growth of pollution.

The unexpected pollution caused is mainly due to the human activities such as globalization, industrialization, and expanding increase in technology. This change is experienced not in a short term but in a long run, when it slowly started affecting people.

Pollution can be formally defined as the undesirable and unintended contamination of the environment by human activities such as manufacturing, waste disposal, burning fossil fuels etc. The effect of pollution can be experienced in different ways.

The most common ways of pollution are:

This tern is not something new, it has been existing since he time of industrial revolution where in big chimneys are pointed out in the air which releases harmful gases into the atmosphere. This phenomenon has been increasing since then as the industries have been developing simultaneously. Today, air pollutants have shown a great effect on plantations, health and life, decreasing the enjoyment of living, rising medical costs, causes global warming and also causes the destruction of the ozone layer.

One of the major causes of air pollution is the release of carbon di oxide into the atmosphere. This happens because of deforestation and fossil fuel burning. Sulfur dioxide is another main air polluter and is released into the atmosphere by the burning of sulfur containing compounds of fossil fuels. Sulfur dioxide is very harmful for the humans on high concentration and sulfur in the atmosphere is the main cause of acid rains. Chlorofluorocarbons also contribute to air pollution by reducing the ozone layer in the stratosphere. CFC’s are produced by the burning of plastic foam items, leaking refrigerator equipment and spray cans.

Contamination of available natural water by industrial wastes and other waste products can be defined as water pollution. Factors causing water pollution can be categorized into two different groups; Point sources and Non- point sources.

Non- point sources are ambiguously defined and are much harder to control. The term non -point source encompasses a large range of sources like when rain and snow moves through the ground and picks up major pollutants and mover towards a major body of water, the runoff of fertilizers from farms animals and crop lands, air pollutants getting washed or deposited to earth, and storm water drained from streets parking lots and lawns.

The contamination of and with different kinds of wastes is called land pollution. The major causes of land pollution are construction, domestic waste , industrial waste and agriculture.

The rising construction of building takes away the trees that takes away the homes of the animals living there. As there are more and more people inhabiting on our planet, the demand for food increases and the forests are cut down to make farm lands. In addition, Herbicides, pesticides, artificial fertilizers and animal manure are washed into the soil and pollute it. Tons of domestic waste is dumped everyday from homes offices etc. They can be recycled or burnt in incinerators. There are still more waste machinery products such as refrigerators and washing machines that are dumped in landfills simply because they cannot be recycled. Plastic factories, oil refineries, nuclear waste disposals, and large animal farms, all lead to land pollution.

We can help to reduce global air pollution and climate change by few ways: 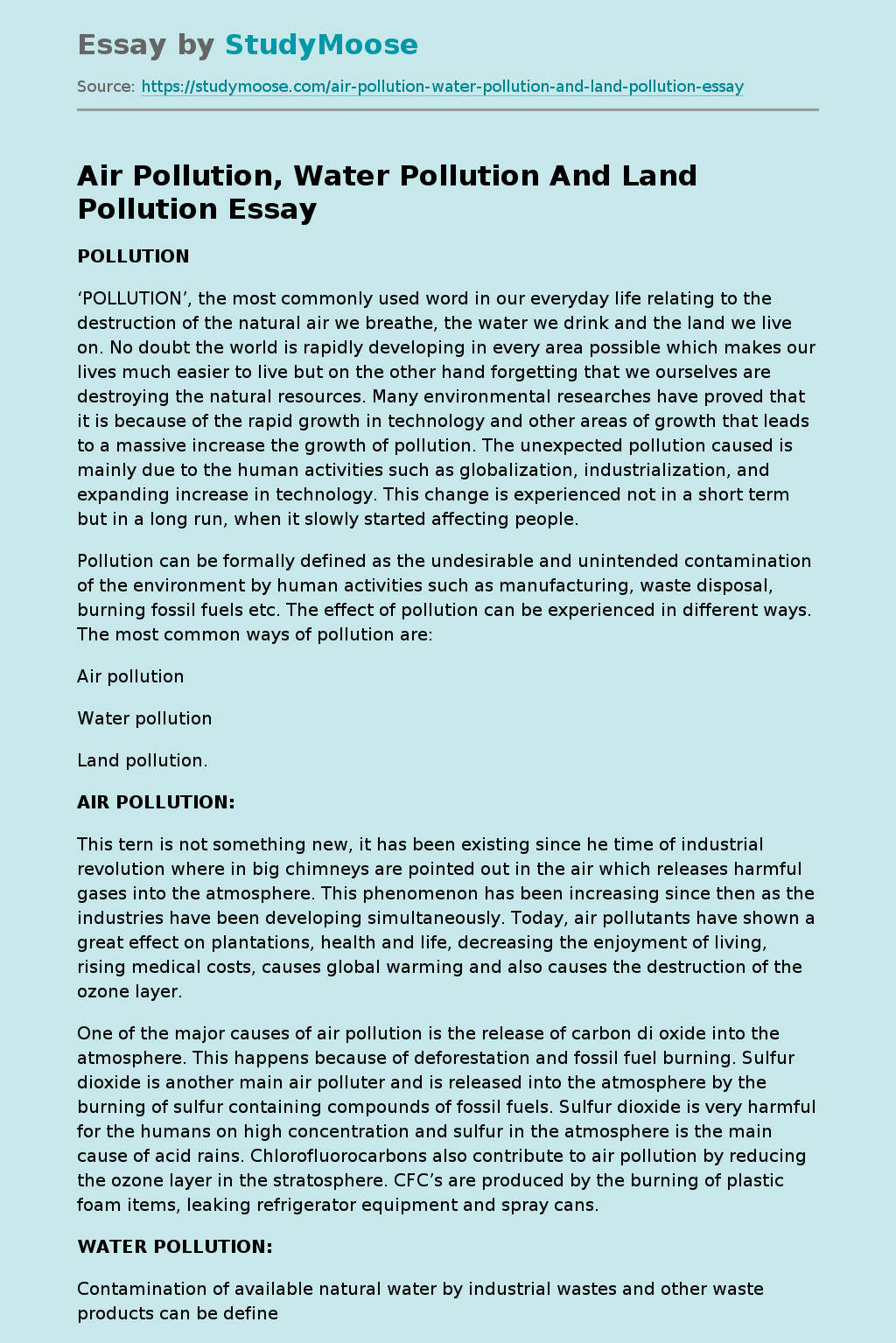