Many people around the world can recall having walked on the street and seen smoke in the air or having walked on the beach and seen countless pop cans popping in the sand. This common event is known worldwide as pollution which is described as the occasion in which the land, air, and water become filthy with several pollutants affecting the plant life and other organisms that live in these conditions. Many of the contaminants involved in the pollution of the environment are fertilizers, sewage leakages, burning of fossil fuels and garbage.

Although pollution is a worldwide problem there are people and whole countries that are fighting against it with greener alternatives to plastic, electricity, and gas.

Two main areas that are severely affected by pollution are both water and air where we can easily observe the drastic effects that our influence has on wildlife and the environment. Among the problems faced are the serious increases of disease in marine and terrestrial life that has led to the extinction of many species.

Water pollution occurs more often today because of the large amount of waste that is dumped near water ways and the acid rain which has been the main source of contamination for most fresh watered lakes. In water pollution there are two types of pollutants the conventional and the non-conventional. The conventional pollutants are considered to be anything such as cans, paper, and plastic bags. The reason why these items and more are dangerous is because these solids glide over water and blocks the suns rays, which then disrupts the carbon dioxide/ oxygen coversion process, which is a vital process for the aquatic life food chain.

Most of the air pollution we observe in daily life is caused by automobiles; power plants, small businesses, and house hold products who release carbon dioxide into the environment which then leads to the formation of smog and acid rain. The pollutants causing air pollution are also responsible for causing diseases which could threaten the lives of both humans and animals. Among the most common diseases caused by such pollutants we can find bronchitis, lung cancer, and heart cancer.

Both soil and noise pollution are the least famous of all the pollutions; although they are not talked about as often as others they remain important. Soil pollution, is one of the most important of all the others principally because most of the things we eat and live off of are somehow related to the soil and if the soil is contaminated we all are affected in one way or another. Soil pollution is any presence of man made products in the natural soil environment. This type of contamination spreads from one point to another is by none point pollution which plays a pretty big role in how contaminants are spread from place to place. The way soil is contaminated is typically by percolation of contaminated surface waters, the application of pesticides, and the direct discharge of industrial waste. When none point pollution occurs also known as contaminated run off it drags contaminents as said before affecting this way the plants that live in the area and the water ways near it will also be contaminated. Among the places where soil pollution is commonly found are those places that are around or near an oil refinery, nuclear power station, and chemical factories. Other less recognized contributors to pollution are both domestic or industrial waste deposits and both agricultural and farming techniques. When taking into account all the factors that affect soil we must not forget chemical pollutants. The major chemical components affecting soil today are petroleum hydrocarbons, pesticides, lead, and other heavy metals.

Noise pollution is not very famous although its drastic consequences are being felt and experienced by living organisms the world around. Noise contamination is the excess human created noise which is emitted by many modern appliances such as automobiles and other forms of transport, bulldozers, jack hammers, and other constructing equipment. Due to this pollution the hearing sensitivity of young children decreases year by year due to the fact that exposure to high noises affects the ear drum and such influences are serious at a young developing age. Other auditory problems are hearing loss that brings with it lack of sleep, heartburn, high blood pressure and indigestion all of which are common to most citizens that inhabit loud and noisy areas. Among other scientific studies on noise levels some scientists have concluded that the noise of passing truck disturbs neurological and cardiovascular functions in the human body, and noise induced stress causes severe tension in ones life which may cause people to be victims of a mental disorders such as anxiety, nervousness and many more. These disorders lead to increasing psychological drug prescriptions and drug dependency among urban citizens who seek relief in medication because their outside world prohibits them from seeking relief somewhere else.

The increasing percentage of pollution around the world has created alternative methods that are commonly used to stop the growing epidemic. Among growing increase of conventional pollutants the environmentalists and other world organizations have invented the three R systems that represent the three greener alternatives to polluting. The three are R’s are recycle, reuse, and reduce all of which are aimed at reducing our impact on the environment around us. For more advanced methods of reducing pollution in situations where pollution involves Non-Conventional methods it is highly recommended that the community use Bio technology which involves genetically modified organisms that are aimed at reducing our impact through utilizing organisms that would naturally eat or produce a certain chemical component and by modifying their genetic makeup we are able to produce bacteria that can clean up oil spills or reduce the time that plastic takes to decompose by hundreds of years. An example of this is seen in the country of Nicaragua who is being considered as a place to conduct scientific experiments with genetically modified bacteria in order to cleanse the Xolotlan Lake of all the contaminants that it contains. The pesticides utilized to spray pests away from crops are now being replaced with organically modified pesticides that provide the desired results without permanently damaging the soil. An excellent alternative to the increasing air pollution and gas shortage are the new alternatives being designed and created such as ethanol motors and biogas that has been proven to be an agent that releases significantly less toxins into the atmosphere then regular gas. We also have the option of buying a hybrid car that has the motor of a motorcycle that practically recharges itself each time it is accelerated.

In conclusion I believe that I have been able to express how sever the damages caused by pollution can effect both the environment and the living things that inhabit it. Also I would like to remind everyone that if we don’t stop now the affects of pollution will intensify creating the effects of global warming also to increase and soon because of are irresponsibility the world will lose more than half of the fresh water left, and also various animal species even those that haven’t discovered yet. With this report I hope to have demonstrated how important it is to use alternatives in order save both the planet and ourselves. 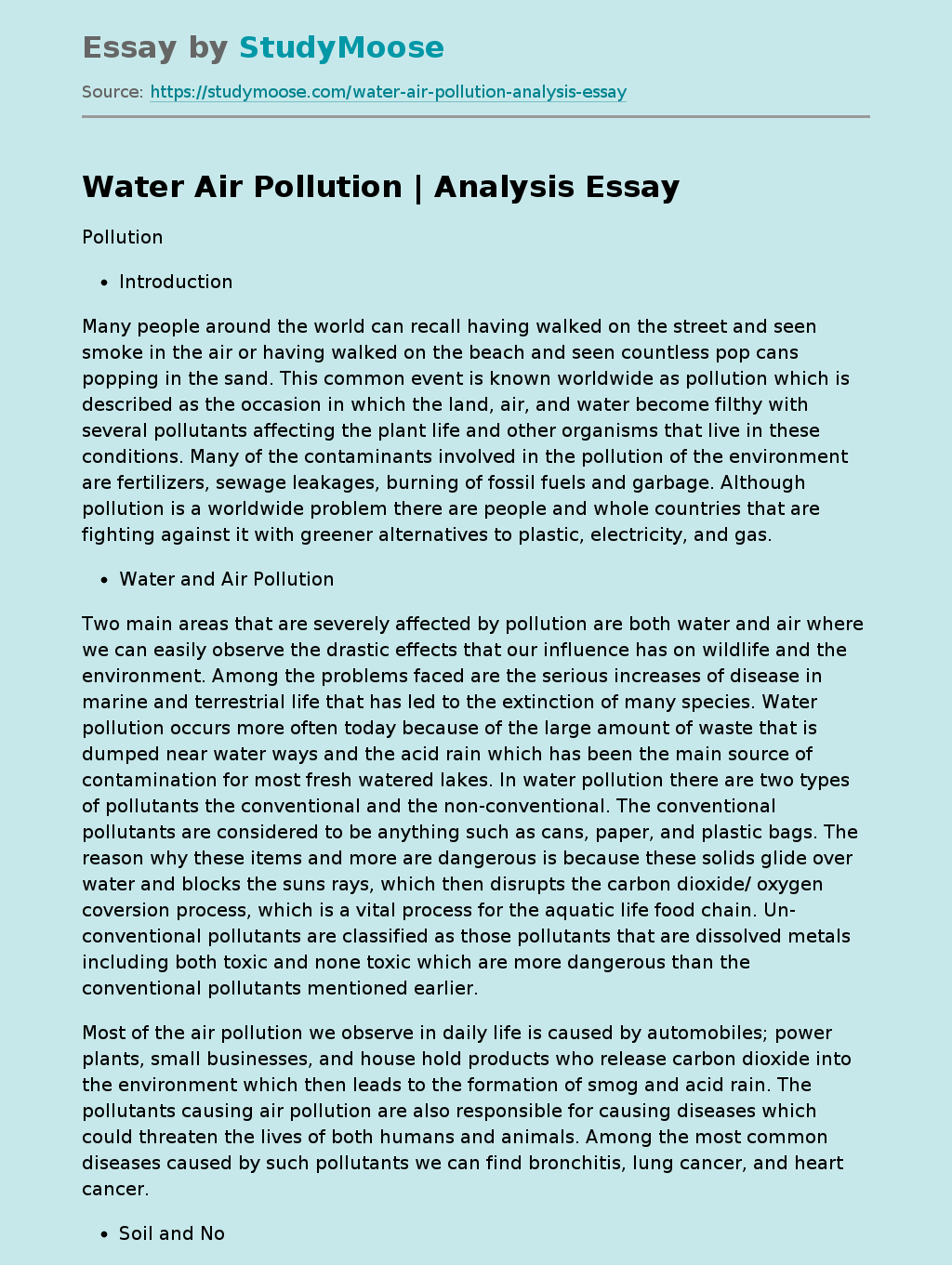