Types of Infrastructure
Infrastructure is divided into two major classifications, “hard” and “soft”. “Hard” is obviously the roads, bridges, etc. It also relates to the big physical networks essential for the functioning of a modern industrial nation Hard infrastructures refers to physical facilities or installations needed to operate, manage and monitor a system with the intention that the structures to be permanent whereas “soft” infrastructure is human capital and institutions that develop it, such as community colleges and universities.. All the institutions which are needed to maintain the economic, health and cultural and social standards of a country may also be referred as “soft” infrastructure such as the education system, financial system, health care system, government and law enforcement.

Don't use plagiarized sources.
Get Your Custom Essay on Types of Infrastructure Just from $13,9/Page

Both hard and soft infrastructure are essential for the progress and discovery of a nation.

The following are types of hard infrastructures but is limited to capital resources that serve the function of delivery or path of people, vehicles, fluids, energy or information and which take the form either of a network or of a critical node used by vehicles.

“Soft” infrastructure is also consisted of groups. It involves both physical assets such as highly specialized buildings and equipment, as well as non-physical assets such as the body of rules and regulations governing the various systems. The financing of these systems, as well as the systems and organizations by which highly skilled and specialized professionals are trained, advance in their careers by having experience. Unlike hard infrastructure, the real meaning of soft infrastructure is the delivery of specialized services to people. Unlike much of the service sector of the economy, the delivery of those services depend on highly developed systems and large specialized facilities, group of specialized vehicles or institutions that share many characteristics of hard infrastructure.

Another one of the groups that make up soft infrastructure is social infrastructure. This included the health care systems like hospitals, health insurance and public health monitoring and regulations; educational and research systems with elementary and secondary schools, universities, specialized colleges; social welfare systems including both government support and private charity for the poor. Last group that is in the subcategory of soft infrastructure is cultural, sport and recreational infrastructure such as parks sports facilities for sports, concert halls, museums, libraries, theatres for cultural infrastructure and business travel and tourism infrastructure includes both man-made and natural attractions like convention centres, hotels and restaurants.

There are less similar systems in hard infrastructure that are usually unnoticed like earth monitoring and measurement networks but serve important daily role’s in everyone’s life. When everything is running smoothly, we don’t notice how much we need it. However, unusual disruptions such as blackouts or terrorist attacks abruptly remind us of how dependent we all are on these systems when suddenly a city goes dark. Every small interruption such as highway construction making a commute to work longer or when we can’t connect to the internet reveals our dependence. Infrastructure is always going to be part of society. In essence, the biggest problem with infrastructure is that it is geared to only take from nature, we must redesign it to give back to the natural world and allow is to live within nature in a way that expands ecology and society. Sources: 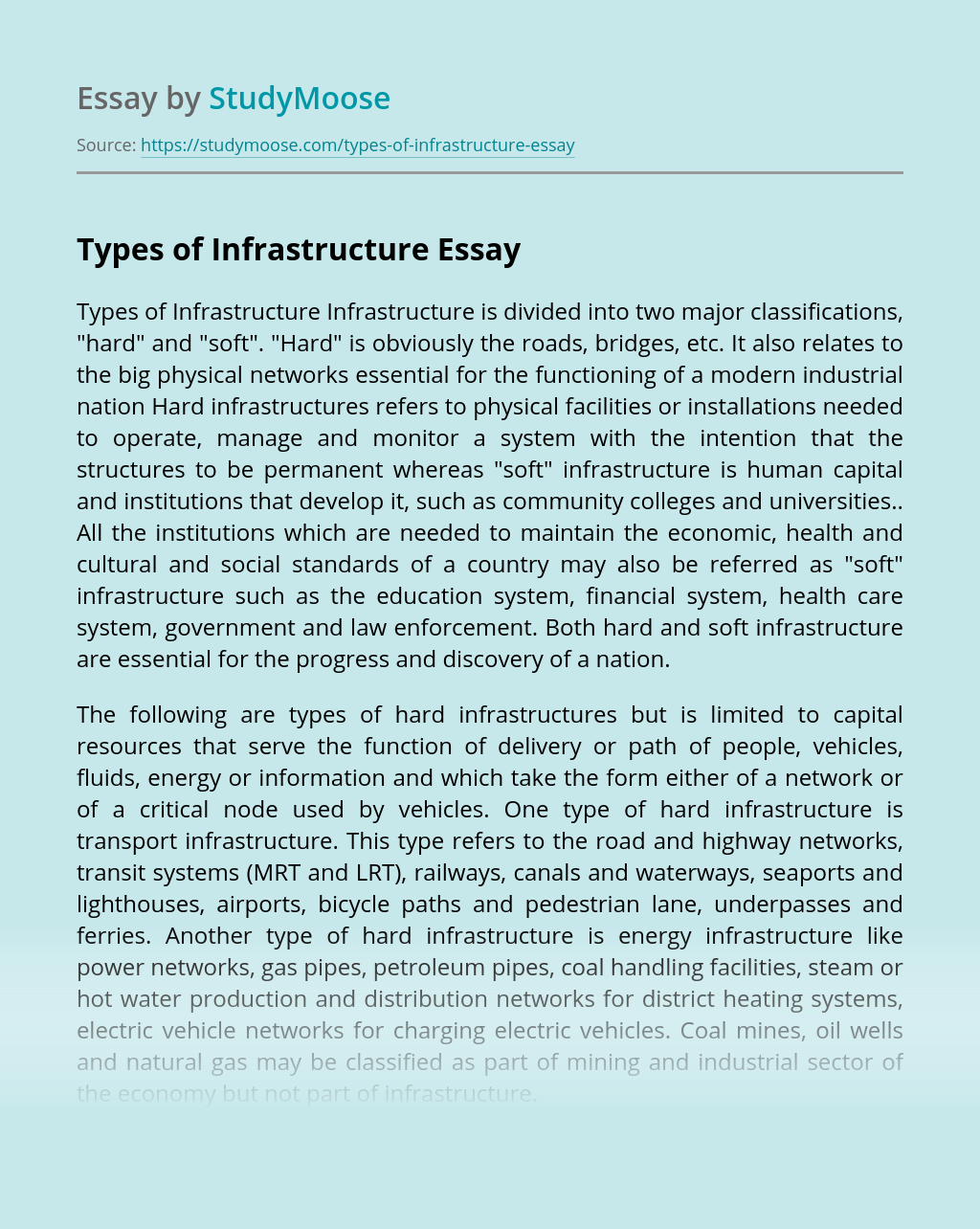 1.1 When planning an activity all children have the right to be safe in their learning environment and as the teacher or teaching assistant it is your job to ensure the safety of every child whether working indoors and outdoors is of the highest priority. This is done by identifying the hazards and risks in... VIEW ESSAY

“Mirror, Mirror, on the wall, who’s the fairest of them all?” “You are.” (Snow White) Ah, yes, the Evil Queen. She was wicked, terrible, and horrid – or was she? Maybe she was just a normal, average person seeking acceptance. Maybe she felt the need to be the best, to achieve perfection. Or, maybe she... VIEW ESSAY

agree in the midst of the time spent congruity evaluation continuously extraordinary. Subsequently, the need of joining the importance examinations identified with every estimation create. This issue has been gone facing so far by getting a handle on basic direct blend plans, related transparently on the client’s inclinations over the immensity estimations. An entrancing examination... VIEW ESSAY

Prompt: Explain through an essay why Columbia University should select you for its Marketing Program. I still remember the day when I picked the morning newspaper from my doorstep and found it quite heavier than usual. To my surprise, there was a toilet soap sample stuck on its last page with a message that read,... VIEW ESSAY