The Profession of Social Work from Past to Present to Future

+84 relevant experts are online
Hire writer
Don't use plagiarized sources. Get your custom essay on
“ The Profession of Social Work from Past to Present to Future ”
Get custom paper
NEW! smart matching with writer

Principles that guide individuals in this profession include social justice, indigenous knowledge, collective responsibility, and respect for diversity. Social workers are required to have multiple skills, values, and knowledge in different areas of social work. Some of these areas include social activists, community developers, community advocates, and educators (Farley, Smith, & Boyle, 2011). Understanding the history of this profession is helpful to individuals interested in pursuing a career in social work.

Social work has been around for many years with its origin being attributed to society’s attempts to address inequality and poverty. The profession of social work started as charity works that were started by the early church (Farley, Smith, & Boyle, 2011). Some of the services provided by the church included caring for the poor, providing healthcare services to sick individuals, and caring for orphans. At the beginning of industrialization and urbanization in the 18th century, the informal systems that focused on helping community members were replaced with social services (Farley, Smith, & Boyle, 2011). This transformation is attributed to a strategy pioneered by the Charity Organization Society which aimed at improving social conditions to alleviate poverty. The government developed the Poor Law to provide care to the poor who were seen as a threat to social order.

However, due to Industrial Revolution, many individuals moved to urban areas leading to increased social problems (Farley, Smith, & Boyle, 2011).

This led to the development of rescue societies that were tasked with providing support to affected communities by resolving social problems such as poverty, diseases, and the lack of access to important services such as healthcare (Bent-Goodley, 2014). In the late 18th century, a new system was developed to help address social problems within the community. Volunteers were trained on how to alleviate poverty in low-income communities through research and reforms (Bent-Goodley, 2014). Poverty was the focus of early social work which was brought about by the Industrial Revolution. At the beginning of the 19th century, questions whether social work was a profession lingered with certain people arguing that social work was not a profession as it lacked the application of theoretical knowledge in solving social problems within the community (Bent-Goodley, 2014).

This led to more concentration on scientific methods to solve social problems with the American Association of Hospital Social Workers being developed in 1918 to enhance formal education in social work (Bent-Goodley, 2014). By 1929, there were 10 university programs relating to social work that were aimed at providing a scientific basis to address patient’s problems as well as addressing negative behaviors due to mental problems (Bent-Goodley, 2014). At the end of the World War II, this highlighted the importance of social workers who were tasked with addressing the needs of military veterans who were participating in the war. This led to the formation of the National Association of Social Workers to promote social work as a profession by enhancing education opportunities and advancing social policies (Bent-Goodley, 2014).

Social Work’s Prospective Future The profession of social work has continued to grow with different social work associations collaborating to enhance education and the profession of social work. The demand for social workers has continued to grow which is attributed to an increase in mental issues, poverty, substance abuse, and disability cases (Rothman & Mizrahi, 2014). The Baby boomer generation that faces a wide range of problems attributed to their old age also contributes to the increased demand for social workers with projections indicating a 16% increase in social work employment opportunities by 2026. Due to the increasing student enrollment, educators are needed to provide education services and guidance to students as well as help families to enhance their parenting and problem-solving skills (Rothman & Mizrahi, 2014).

Most of the privileges enjoyed by American citizens today are attributed to the efforts of early social workers who dedicated their energy to fight against human injustices and inequalities due to gender, race, or faith (Reamer, 2013). It is important for individuals interested in pursuing a career in social work to understand the origin of this profession and developments in the profession since its origin. This will help for social workers to understand their core values and responsibilities while performing various roles within the community (Reamer, 2013). Future projections should also be taken into consideration such as the integration of technology in performing various social work roles that aims at enhancing the performance of social workers in their respective positions.

The Profession of Social Work from Past to Present to Future. (2016, Mar 12). Retrieved from https://studymoose.com/the-profession-of-social-work-from-past-to-present-to-future-essay 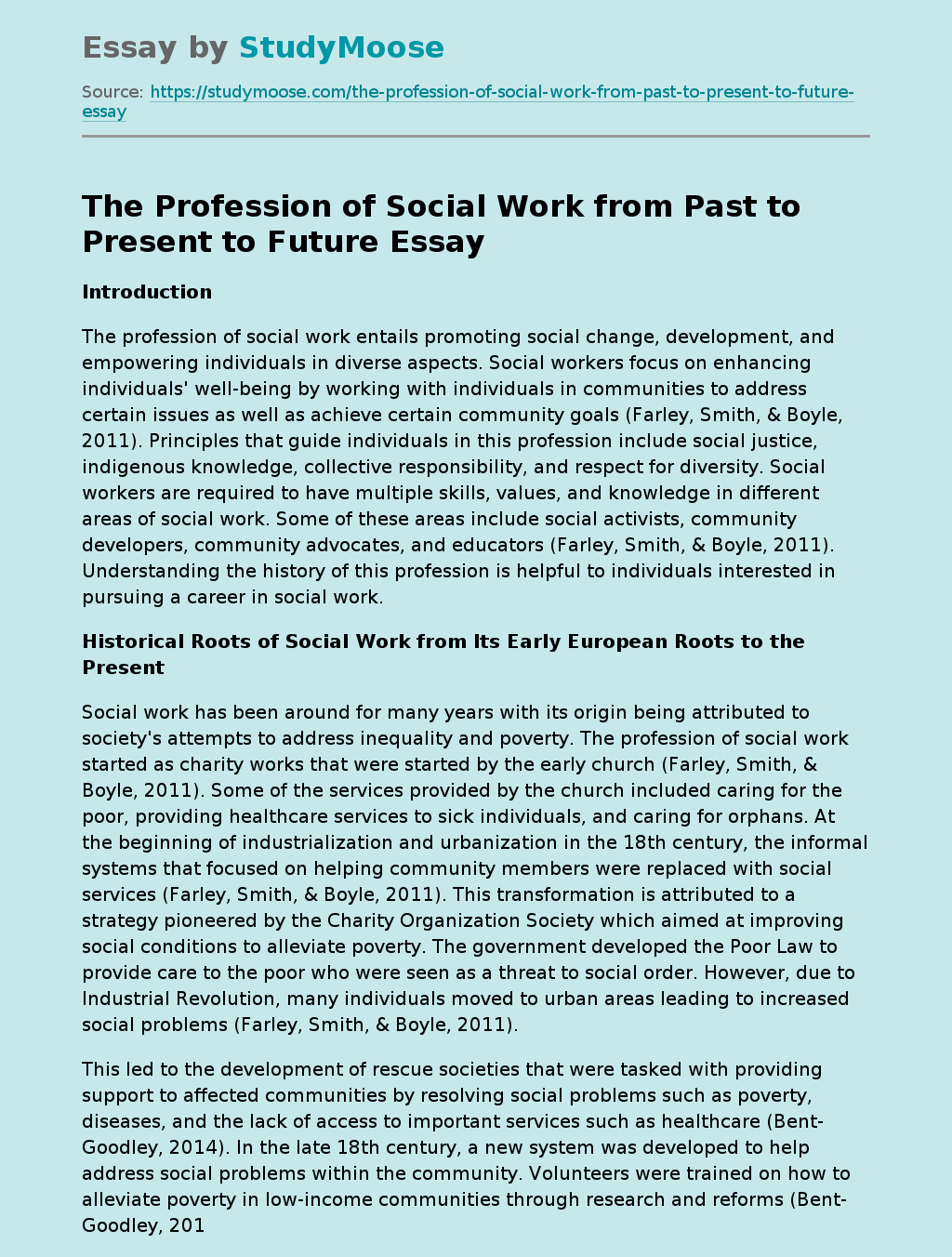