The Murder of Jessica Lundsford and Death Penalty

On February 23, 2005 a nine-year old girl in Homosassa, Florida disappeared after attending a Wednesday evening church service. She was missing for almost 3 weeks before police found her body in a trash bag, holding a purple stuffed dolphin, in a grave no more than 3 feet deep. Publicly released autopsy reports said that the little girl, Jessica Lunsford, who dreamed of being a fashion designer and Olympic swimmer, had managed to tear two fingers through the garbage bag before suffocating to death.

Reports say that a neighbor, 46-year-old John Couey (who was drug hazed) broke into the family’s unsecured mobile home at 3am and kidnapped Jessica, covering her mouth and telling her to keep quiet.

Don't use plagiarized sources. Get your custom essay on
“ The Murder of Jessica Lundsford and Death Penalty ”
Get custom paper
NEW! smart matching with writer

He held her captive for more than a day and during this time she was the victim of sexual molestation and rape. She was told to stay in the closet while he went to work and did other activities. Although there is no substantial evidence to prove how long she was captive, it’s very possible it was as long as three days.

On the last day, Couey tied Jessica up with stereo wire, forced her into trash bags and buried her alive in his half-sister’s backyard, visible from Jessica’s house, only 150 yards away.

Couey’s criminal record spans for more than 30 years and 24 arrests, including DUI, burglary, larceny, fraud, drug charges, and fondling a child under 16 (making him a sex offender in the state of Florida). Although he was a registered sex offender in Citrus County, he had not yet registered his new address, where he lived across the street from Jessica.

He was sentenced to 10 years in prison, but he was paroled in 1980 because of prison overcrowding.

Couey’s niece, Madie Secord, testified to purchasing a bus ticket in her name to Savannah, Ga., at her uncle’s request after Jessica went missing. Upon burying Jessica Lunsford alive, Couey fled to Georgia in hopes of avoiding discovery and criminal charges. He was arrested in Augusta for violating probation charges (crossing state lines without informing authorities). Couey was one of the registered sex offenders police tried to find after Jessica’s disappearance. After being taken into custody, he confessed to the charges after a FBI administered polygraph test. However, because the officer’s denied him his Miranda rights, the confession was not admissible into court. He was charged with capital murder, burglary with battery, kidnapping and sexual battery on a child less than 12 years of age, but he pleaded not guilty.

The residents of Couey’s half sisters house were interviewed twice regarding questioning on the whereabouts of Couey. They were informed that he had violated his probation by not reporting his new address. It is possible that Jessica was still alive in the house while these interviews occurred. However, his family claimed to not know his whereabouts. They were taken into custody as well.

In order to have a more impartial jury, the trial was moved to Miami. Besides Couey’s confession (which was not admissible in court because officers ignored his requests of lawyer presence), investigators also found Jessica’s fingerprints in Couey’s closet as well as her blood and his semen on his mattress. DNA analyst Roshale Gaytmenn also testified that she found the DNA profiles of Jessica and Couey on pillows that were found in Couey’s room. The jury also viewed the stereo speaker wires that were used to bind Jessica’s wrists. A fiber analyst testified that the ligatures matched wires that ran from inside Couey’s room to an antenna on his roof.

The defense claims that Couey suffered from mental retardation caused by a brain damage, lifelong substance abuse and an abusive childhood. John Couey’s troubles supposedly began when his biological father pushed his teenage mother out of a moving car when she was seven months pregnant with him. Couey was born prematurally a few weeks later. He claims that his mother fed him sugar water rather than formula and his stepfather beat him and tied him to a bed once as punishment for bedwetting. When his mother freed him from his restraints, the man allegedly chased after him and slammed his head repeatedly in a door. As a child he was said to be shy, quiet and withdrawn, possibly as a result of his speech impediment and oversized ears, for which he was teased.

Public defender, Alan Fanter said Couey suffered from mental retardation and paranoid delusions brought on by childhood trauma that made him incapable of sound decision-making. He has the “mind of a child”. Couey suffered from visual and auditory hallucinations that dated back to his early childhood, when he and his sister were shuffled among different relatives after leaving their mother, according to forensic psychologist Dr. Robert Berland. Berland said he based his conclusions on interviews with Couey’s relatives, including an aunt, his sister and his cousin, but that most of the information came from an interview with Couey in July 2006. Couey’s aunt, Virginia Kloetzer, testified in a videotaped interview that, while Couey was living with her family, he once cut up her nightgown into shreds.

“He said, “My mind told me to do it,'” said Kloetzer, who took Couey in when he was 5 and kept him for about four years. “I said, ‘Next time your mind tells you to do something that’s not right, you tell it “no.”‘”His half sister (whom he lived in the house with), claims that she and Couey had shared a “small” rock of cocaine the night he abducted Jessica. However, she denied having any knowledge that Jessica was ever in the trailer. Dr. Robert Berland, who administered Couey’s IQ test, said that the results were several points below the medical standard for retardation. He credited his IQ to childhood brain damage and a tendency for sniffing glue and gas as a teen.

Gene Secord, Couey’s nephew, testified that Couey had told him, while they were in jail together in 2006, that Jessica’s death was “in the past” and that if his sister had loved him more, the murder would not have occurred. To earn an official pardon from a death sentence, lawyers for Couey, who spent most of his trial doodling in coloring books, must convince 5th Circuit Judge Richard Howard that he actually suffers from mental retardation, a burden that experts in the field describe as an “uphill battle.” A Florida law, as well as a decision made in 2002 by the Supreme Court states that offenders with mental retardation cannot be executed.

The court can chose between two sentences, the death penalty or life in prison without the possibility of parole, the only two options available in accordance with Florida law. The jury only adjourned for 4 hours before reaching a 10-2 verdict that imposes the death penalty. The jurors’ decision, which does not need to be unanimous, is an advisory sentence to Judge Richard Howard, who makes the final decision. Judge Howard will hear evidence from both sides to determine whether or not Couey is deserving of mercy, and issue a formal ruling on August 10, 2007.

Since the 2005 murder, Mark Lunsford, Jessica’s Father had pushed for stricter sex offender laws. The “Jessica Lunsford Act” has already passed as a law in Florida. It calls for “prison sentences of 25 years to life for sex offenses against children under age 12, better registration of convicted sex offenders and a GPS notification system to track down probation violators.”Fortunately, some good came out of such a horrific crime.

It brought new, tougher laws for sex offenders, as well as better monitoring of their actions, and maybe even a new respect for what they can be capable of. In addition, it brought more attention to child abuse, both mental and physical, and what effect if can have on our behavior as an adult. It made us ask at what point an individual should be held accountable for his or her actions. In this case, maybe that question is best answered by John Evander Couey himself. He said that he was under the influence of crack-cocaine when he abducted Jessica Lunsford and that he would apologize to her in heaven. If he was not aware that his actions were wrong, why would he feel the need to apologize?

The Murder of Jessica Lundsford and Death Penalty. (2016, Jul 18). Retrieved from https://studymoose.com/the-murder-of-jessica-lundsford-and-death-penalty-essay 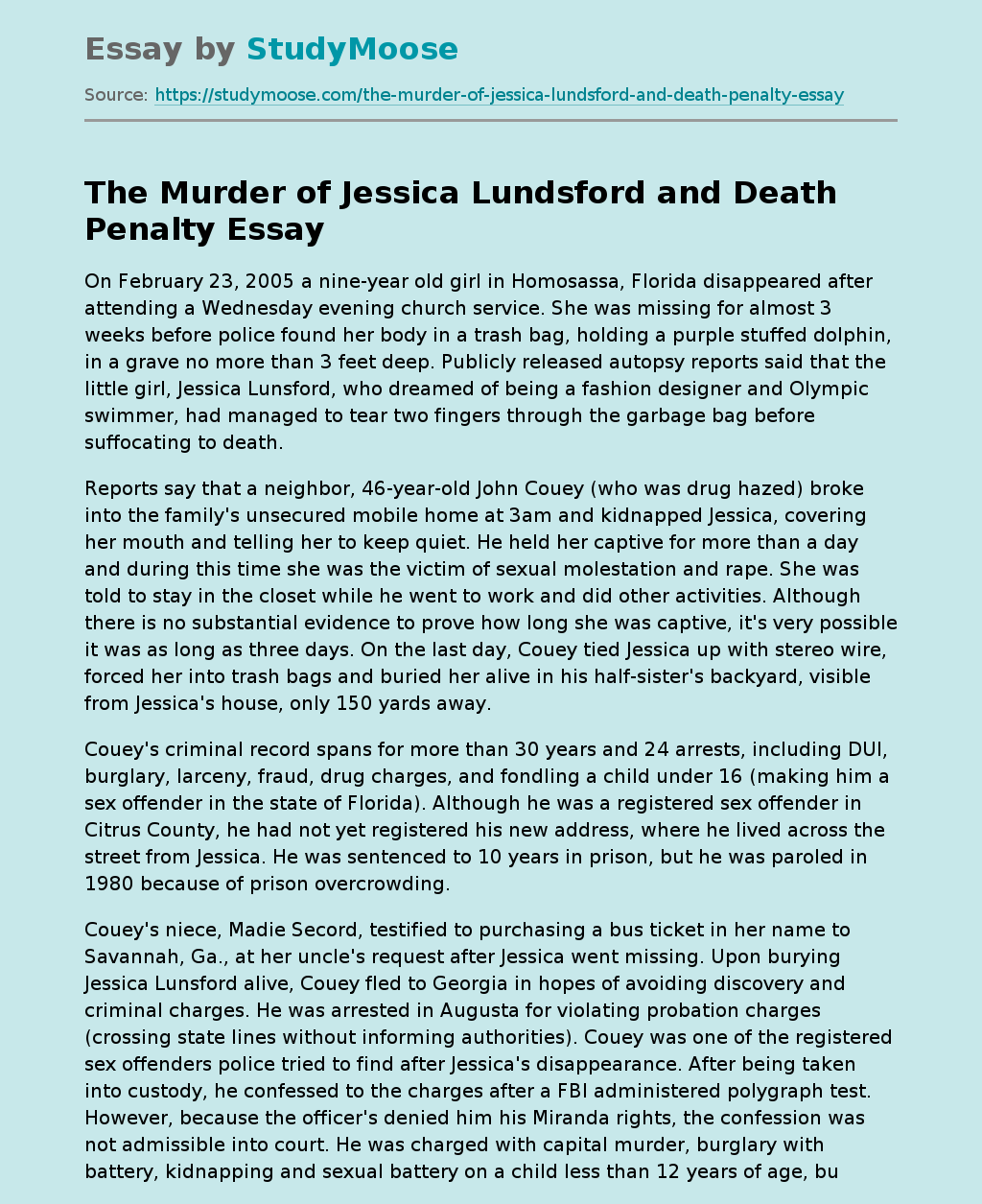