The purpose of this experiment is to determinethe Phophorus content of fertilizer samples using Gravimetric Analysis. It involves dissolution of the fertilizer sample, precipitation and heating and cooling of the sample. Pooled standard deviations of the two data sets for % Pwet, %Pdry, %P2O5 wet and %P2O5 dry were 5.1448, 5.1472, 11.8436 and 11.8504 respectvely. During the experiment a data rejection for %P and %P2O5 was concluded at approximately 20% and 47%. Determination of the Phosphorus content in fertilizer is vital in quality assurance and in the choosing of a fertilizer grade important for agriculture.

Don't use plagiarized sources.
Get Your Custom Essay on Gravimetric Determination of Phosphorus in Fertilizer Samples Just from $13,9/Page

Plants require essential nutrients such as Nitrogen, Phosphorus, Potassium or Sulfur to grow. However, most soils lack these macronutrients thus a decrease in food production. In connection with this, the use of fertilizers containing these macronutrients has been part of the agricultural tradition. Fertilizers have in its labels a set of numbers, known as the fertilizer grade that always appear in the form N-P-K, indicates the proportions of essential nutrients present (ie 10-10-10 which means 10% Nitrogen, 10% Phosphate in the form of P2O5, 10% Potassium in the form of K2O).

Different organizations worldwide like Association of American Plant Food Control Officials (AAPFCO) in the United States, conduct different tests to assess the accuracy and consistency of the nutrient content with regards to that of the product label and also to ensure quality assurance as part of consumer rights. Analysis of fertilizer can be conducted using Gravimetric Analysis.

In Gravimetric Analysis, the product with known composition is resulted from the conversion of the analyte to a soluble precipitate that can be easily filtered and is free from impurities by subjecting it to heat. This product of known composition will then be weighed and the percentage of the analyte in the sample can be determined. In this experiment, the analyte, Phosphorus in the fertilizer will be precipitated as Magnesium Ammonium Phosphate Hexahydrate, MgNH4PO4 ( 6H2O:

The purpose of this experiment is to determine the percentage of Phosphorus (P) and Diphosphorus (P2O5) in the fertilizer sample by the means of Gravimetric Analysis.

In this experiment, the wet (as received) and dry weights of the fertilizer sample, obtained from the previous experiment of moisture determination of the same fertilizer sample were used. Weights were divided into two data sets, Data Set 1 having four (4) trials and Data Set 2 having three (3) trials.

The dried sample from the previous experiment from which moisture was determined, was dissolved and is converted into a sparingly soluble precipitate, MgNH4PO4 ( 6H2O which is then filtered and weighed. The filter paper used was weighed to easily determine the weight of the precipitate. The precipitate was then dried and weighed.

It should be noted that NH3 is added slowly with continuous stirring to the solution to ensure the growth of the precipitate, resulting to a precipitate that is easier to filter and be freed of impurities. This technique is related to the von Weirman’s ratio wherein the particle size of a precipitate is inversely proportional to the value of Relative Superaturation given by:

Q= concentration of reactants before precipitation
S= solubility of the precipitate

Precipitates are either formed by nucleation, or by particle growth. In nucleation, particles join together to form a large mass, usually a result of supersaturation in solutions. It consists of huge amount of precipitate, however, is composed of small particles that are hard to filter. In this experiment, what is desired is particle growth that yields a precipitate of large size but of smaller number. This is possible by further precipitation wherein particles adhere to the surface of initially nucleated particles. The supersaturation state of the solution is eased during constant stirring upon addition of the precipitating agent, thus promoting particle growth rather nucleation. With respect to the von Weirman’s ratio, the higher the value of the ratio, the higher the possibility of getting smaller particles, thereby promoting nucleation, contrary to a lower value of the ratio which promotes particle growth that will yield larger precipitates that is important in this experiment.

After the addition of the precipitating agent with constant stirring, the mixture was allowed to stand at room temperature for 15 mins. It is important to let the mixture stand, without any agitation or external forces acting on it to let digestion to occur. Digestion is necessary to allow reprecipitation, wherein particles will adhere to the initially small precipitates, and to expel water molecules thus lessening the surface area available for adsorption which causes impurities to obtain larger particles with greater purity and easier filterability.

Even though Gravimetry is considered as one of the efficient and less expensive ways of determining a fertilizer component, this technique is still not fool proof and errors due to determinate and indeterminate factors may lead to an erroneous result. One of these errors is the fast addition of the precipitating agent and low impact of agitation that leads to the production of larger amount of small particles that may pass through the filter paper thus having lesser amount of precipitate, and a lower value for the P or P2O5 content in the sample. On the other hand, since while the mixture stands in room temperature without any coverings, contaminants like dust particles may be included in the mixture, contributing weight to the precipitate, giving a higher yield. This high yield will give a P or P2O5 content of the sample higher than its actual value.

It can be observed from Table 3 that the range of % P and % P2O5 lies between approximately 6% to 13% and 15% to 30% respectively with 20% and 47% suspicious values since it is almost double of the values in range. By performing the Q test, the values were confirmed to be accpetable with regards to the actual value and values in the population, or rejected. Table 4.1 and 4.2 shows the values that were rejected and accepted for each data set. Notice that the 20% and 47% for % P and % P2O5 respectively, both belonging to Data Set 1 were rejected with 95% confidence level, meaning that the Qexp exceeded the value of the Qtabulated.

Of all the trials in both Data Set 1 and 2, the group with values similar to that of the rejected values were the ones who obtained the greatest amount of precipitate. See Table 2. This rejection or errounous error in the data can be attributed to the determinate and indeterminate errors in the experiment. One more error that could be the reason for this rejection is the personal error in terms of the reading of the analytical balance. Also, because of this rejection in data, aside from the fact that Data Set 2 has lower number of population, Data Set 2 parameters for Measure of Precision are closer to each other, with the dried samples having greater values than that of the wet sample. Iti s because dried sample are purer than that of the wet sample containing still moisture and other interfering agent to getting the actual % P and % P2O5.

In this experiment, it was determined that the fertilizer sample has % P range of 6% to 13% with % P2O5 from 15% to 30%. However, the usual types of fertilizers with phosphates contain a minimum of 42.5 % water soluble phosphate and 46% total phosphate by weight, as in the case of Triple Superphosphate or 85 % water soluble and 20% available in Superphosphate. It should be noted that the theoretical values will vary depending on the type of fertilizer used in the experiment.

Despite the data rejection that occurred, overall, it can be said that the experiment is a success since the objectives of the experiment such as performing gravimetric analysis in the determination of phosphorus content and to know the principle in separation by precipitation were achieved.

Yet, it is recommended that there would be a specific manner of putting the precipitating agent, like addition dropwise or certain amounts per second or stirring so as to ensure the proper formation of crystals needed by the experiment. It should also be observed that upon digestion, or letting the mixture stand without agitation, the mixture should be covered to avoid impurities present in the atmosphere. 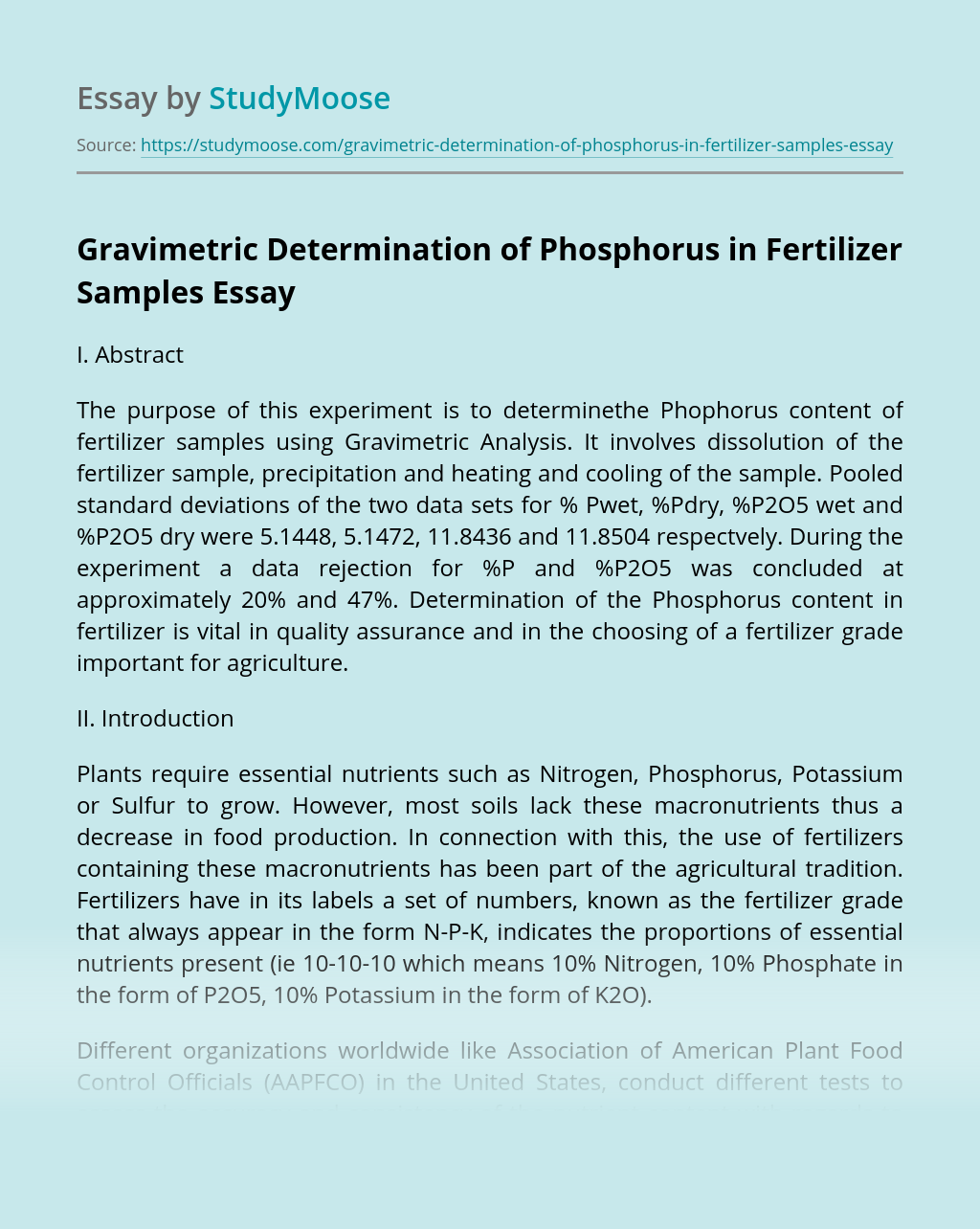 This lab was designed to show how caffeine affected the heart rate of daphnia after exposing them to different concentrations of caffeine for ten minutes. Caffeine is a stimulant, which, in humans, causes heart rates and blood pressure to increase. Its effects range from mild alertness to heightened anxiety and body tension. We wanted to...

Hey Jamie! I’ve been wondering for a while now how you can really know if something in art or natural sciences is true.? I mean when you look at a piece of art or let’s say the way atoms connect with each other, or how the gravity works, how do you know it’s all true?...

An acid is a group of chemicals. Acids are positively charged ions, they are liquid and are solutions of pure compounds in water. If you want to know if something is an acid, you can test it by using litmus paper. Acids will turn litmus paper red, whilst alkalis will turn it blue. Alkalis are...

An Introduction to Qualitative Analysis