Analysis of Silver in an Alloy

The alloy used for this experiment was a U.S. Mint ten-cent dime alloyed as silver and copper if made before the year 1965, after which mints began using copper and nickel instead. First, the dime piece was dissolved in nitric acid and the silver was precipitated as silver chloride.

Don't use plagiarized sources. Get your custom essay on
“ Analysis of Silver in an Alloy ”
Get custom paper
NEW! smart matching with writer

The precipitate was then filtered, washed, dried and weighed. To obtain the percent of silver in the alloy, the mass of silver chloride was compared to the mass of the original sample. Because the results are based on the mass of a product, the procedure is determined as gravimetric analysis.

Nitric acid (HNO3) is required as an “oxidizing agent” because silver and copper are very non-reactive metals and cannot dissolve in hydrochloric acid or sulfuric acid.

The nitrate ion (NO3ï¿½) oxidized Ag(s) to Ag+(aq) and Cu(s) to Cu2+ (aq). As the nitric acid was reduced, the product became nitrogen monoxide (NO), a colorless gas that instantly reacts with oxygen in the air to produce nitrogen dioxide (NO2), an orange-brown gas. The following demonstrate the half reactions mentioned:

To separate the silver ions and the copper ions, the silver was precipitated as silver chloride (AgCl) by adding dissolved sodium chloride (NaCl) to the solution, which also created the product of copper (II) chloride (CuCl2).

Amount of NaCl necessary to precipitate the silver x2

Assuming that the dime is 100% silver

However, not all of the silver from the original sample was and could be accounted for. Because the funnel from Day 2’s procedure was not covered in plastic wrap before being left in the drying oven overnight, dust particles possibly could have collected in the filter in addition to the precipitate. This would offset the measurement of the mass of precipitate on Day 3. Furthermore, during Day 2’s procedure, there was the risk that the precipitate had “peptized”, forming minute particles that could pass through the filter due to the use of the wash bottle to wash the precipitate into the funnel with the dilute nitric acid solution.

This problem is solved if measures such as 2 mL of 6M HNO3 had been added to the 150mL of distilled water in the wash bottle. The outcome would not have shifted greatly, but it would have avoided the possibility allowing all of the particles to pass through. Additionally, it is my opinion that if the lab spanned a time slot such as 2 hours to complete the lab and the written report, the quality of the results would have more reputability because it was all done at once.

Why is a twofold excess of chloride added to precipitate the silver?

If the funnel containing the silver chloride is not cool when its mass is determined, will the calculated percent silver be too high or too low? Why?

Calculate the mass of silver in your original sample. Using the mass and the current price of silver calculate how much the silver in this experiment was worth.

Analysis of Silver in an Alloy. (2017, Nov 17). Retrieved from https://studymoose.com/analysis-of-silver-in-an-alloy-essay 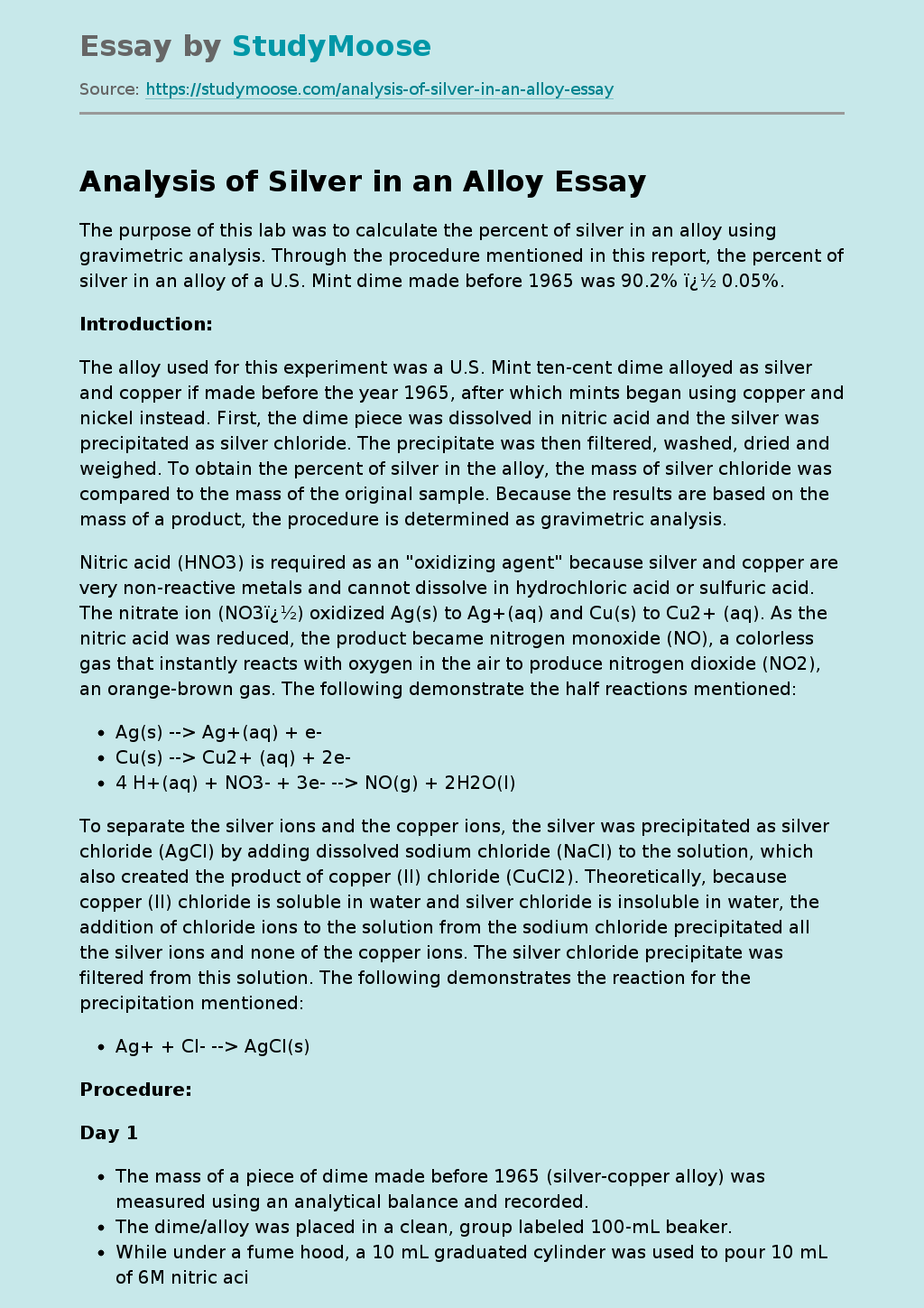