The story “The Golden Kite, the Silver Wind”, can be seen as an allegory about the Cold War. The opposing towns, the walls, and the Mandarins in the story all serve as symbols to the war. The towns represent the two opposing states in the Cold War-the United States and Soviet Union. The two rival towns in the story symbolize the United States and the Soviet Union because they continuously upgrade their walls’ structures to stay on top of their opponent, similarly to how the USA and USSR added copious amounts of improving nuclear weapons to their stockpiles.

Turn in your highest-quality paper
Get a qualified writer to help you with
“ The Golden Kite, the Silver Wind Book Review ”
Get high-quality paper
NEW! AI matching with writers

They never combated, but tried to surpass each other by increasing weaponry. The Mandarin of one of the towns, commands, “[Y]ou raisers of walls must go bearing trowels and rocks and change the shape of our city” (Bradbury 367)! The Mandarin, like the USA or USSR, competes with the city of Kwan-Si by ordering the workers to build a wall that resembles “a club which may beat the pig [wall] and drive it off” (Bradbury 367).

The stonemasons and architects in the story symbolize the chemical plants that were used to manufacture nuclear weapons in the Cold War, and the walls that the workers construct represent the nuclear weapons.

The Mandarins’ constant needs and commands to improve the structures of the walls can be compared to Joseph Stalin’s and President Truman’s orders to amass the weapons. Despite the lack of combative violence in the Cold War, it led to economic issues and deaths of people due to local civil wars fueled by the war.

In the story, consequences arose after the town of Kwan-Si reconstructed their wall to outdo the other town’s wall, such as “disease, early sorrow, avalanches, grasshopper plagues, and poisoned well water” (Bradbury 368).

The Mandarins’ dispute caused more problems than they expected, comparable to Stalin’s and Truman’s role in the Cold War. Moreover, the reconciliation of the two mandarins toward the end of the story signify Bradbury’s perspective on the Cold War. Bradbury writes, “the towns became the Town of the Golden Kite and the Town of the Silver Wind . . . and business tended again, and the flesh returned, and disease ran off like a frightened jackal” (Bradbury 370), conveying that the unity of two regions must exist in order for the environment to be harmonious and fluid. Because this story was written during the Cold War, the text hints that Bradbury felt the war was vacuous, and that the USA and USSR should stop their prolonging arms race.

The walls, towns, and Mandarins are symbols of the nuclear weapons, the states, and the leaders in the Cold War, respectively, and the unity of the golden kite and silver wind represents the balance that, ideally, should be maintained throughout the regions. 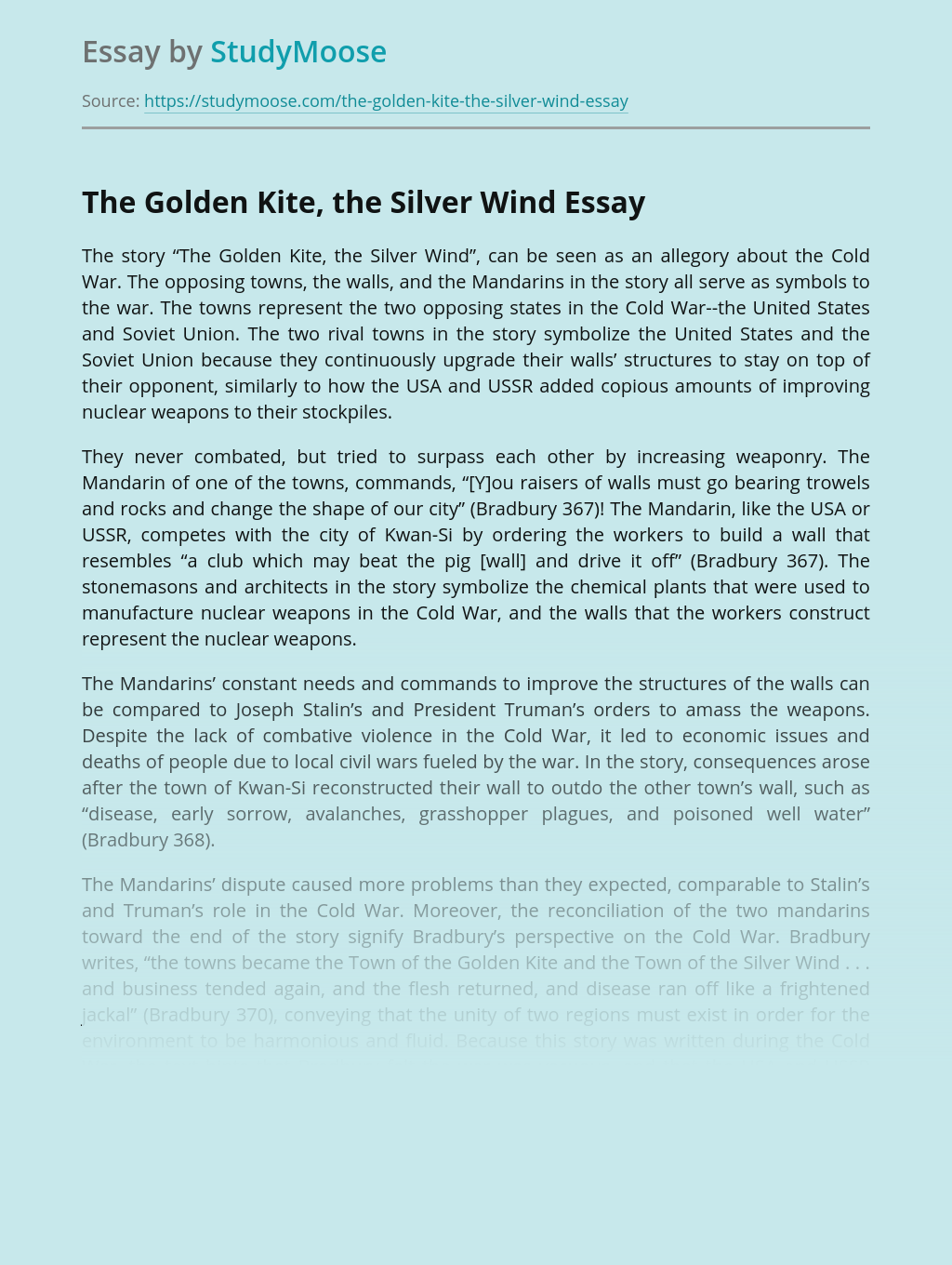 Turn in your highest-quality paper
Get a qualified writer to help you with
“ The Golden Kite, the Silver Wind Book Review ”
Get high-quality paper
Helping students since 2015
Stay Safe, Stay Original