The Allegorical Meanings of Shirley Jackson’s “The Lottery”

A small town is holding a lottery to fulfill the annual and ritualistic mass-engendered killing of a townsperson. This is the pure genius of Shirley Jackson. She authored about six novels and 200 short stories. Like many of her other short stories, this controversial piece was published in the New Yorker Magazine, in 1948, shortly after the end of World War II (from 1939-1945). She tackles sore political issues post-war by putting twists in what starts like a very folksy and joyful story but ends up with a martyr and a story that denounces American principles.

Don't use plagiarized sources. Get your custom essay on
“ The Allegorical Meanings of Shirley Jackson’s “The Lottery” ”
Get custom paper
NEW! smart matching with writer

Jackson’s ‘The Lottery’ is an allegorical account that portrays the tragedy of mob-mentality, that lead to the killing of an innocent townsperson. This piece was published right at the beginning of the Red Scare. This was a time where America was excessively fearful of Communism; essentially because Americans are terrified of what they don’t know. Jackson tacitly denounces this vindictive nature that underlies countless American principles.

A close-minded mentality is evident in the actions of the townspeople from ‘The Lottery’. Once a year the townspeople would gather around and participate in a lottery to determine who was going to be killed. They blindly follow this tradition, not fully understanding why or how it came along; simply, they embody a mob mentality. This group-inflicted murder symbolizes the underlying ignorance of American culture and the violence and ruthlessness it yields. It isn’t simply people gathering around to watch someone die, but there is fervent participation from all town members; everyone between baby Davy Hutchinson, and town elder, Old Man Warner.

The stoning is foreshadowed at the beginning of the story. The children ran around and ‘… made a great pile of stones in one corner of the square and guarded it…’ (Jackson, pdf) This enthusiasm was a factor in the high level of shock that rippled throughout readers. The piece started off as something that seemed to invoke joy in readers but ended up attacking their fundamentals, with a body count. As the plot develops, there are questionable traditions that are carried out before the lottery starts, and it raises a lot of questions. Mr. Summers, the coordinator, was sworn in by a ‘tuneless chant’, and as everyone went to pick up their slip of paper, they saluted. This reminds readers of Hitler and the Nazis. Nazis were known by these salutes and they belted out chants (Sieg Heil); this all an example of herd mentality. A lot of the beliefs that Nazi’s had stemmed from their ignorance and close-minded culture. They were made to believe that their practices were correct and that dying for the sake of the ritual was some sort of sacrifice. Old Man Warner said that this was his 77th year participating in the Lottery. He also becomes very defensive when he was told that neighboring towns are ridding of the Lottery. He says, “no good would come out of that” and called them ‘a pack of fools.’ The townspeople’s conviction to the ‘Lottery’ is exhibited in the black box where the slips were kept.

There is no clear explanation to their fixation on the ritual, but they were too scared to see what would happen if they stopped it all together. ‘Mr. Summers spoke frequently to the villagers about making a new box, but no one liked to upset even as much as the tradition as was represented by the black box.’ (Jackson, pdf) The box serves no purpose, except in the end of June, for the time it takes to carry out the lottery. ‘The rest of the year, the box was put way, sometimes one place, sometimes another; it had spent one year in Mr. Graves’s barn and another year underfoot in the post office. and sometimes it was set on a shelf in the Martin grocery and left there.’ The townspeople don’t seem occupied by the box or the lottery throughout the year. Maybe they fear it, or maybe they forget all about it.

Tessie Hutchinson seems to have forgotten about it all along, and then she ‘… ‘remembered it was the twenty-seventh and came a-running.” (Jackson, pdf) Jackson uses her short story as a vessel to condemn/ deplore the fundamentals of American culture. She uses allegory to condemn mob mentality, where they kill one of their own once a year, and the entire town eagerly partakes in the stoning of the lottery ‘winner.’ She addresses mob mentality in the sense of racism/alienation, especially during the late 1940s and early 1950s, postwar. The statement Jackson endorses, makes her piece is relevant today, as society battles racist politicians, homophobia, Islamophobia, war, and so on.

The Allegorical Meanings of Shirley Jackson’s “The Lottery”. (2021, Aug 03). Retrieved from https://studymoose.com/the-allegorical-meanings-of-shirley-jackson-s-the-lottery-essay 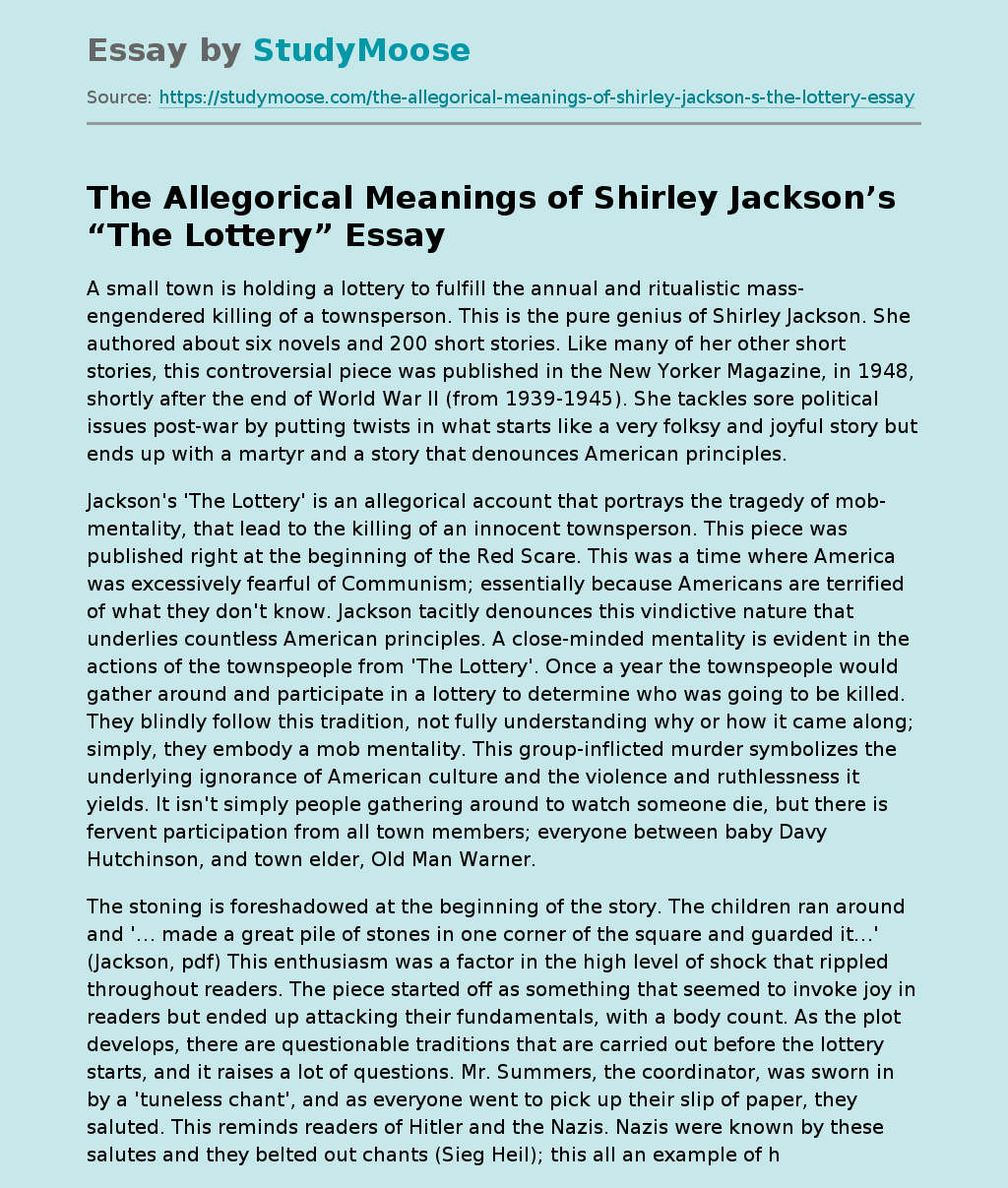