Symbolism in “The Lottery” by Shirley Jackson

In the short story “The Lottery” the black box represents the longevity of the tradition and death. The tradition of the lottery had been around even before the oldest man in the village was born, even though some feared the box, they did not dare to do anything to it since it was the exact representation of the tradition and that would upset it (Walker 1). This implies that the citizens of this village have been too involved in this tradition for so long that they no longer know how reckless and heartless it is.

Don't use plagiarized sources. Get your custom essay on
“ Symbolism in “The Lottery” by Shirley Jackson ”
Get custom paper
NEW! smart matching with writer

This box became shabbier and the black color that it used to have had now faded (Walker 2). Comparatively, a coffin also loses color as time passes and with it, death also comes. This black box symbolizes the loyalty these citizens have to the tradition and the death that comes with it.

The original ritual represents how some parts have changed but the purpose is still the same.

For example, the ritual had changed to slips of paper because the population increased (Walker 2). In addition, their role did not change, it still served the purpose that it represented each citizen. Similarly, the black box became shabbier and the color faded (Walker 2). Yet the purpose was still to carry the slips of paper that decided who will be chosen to die. The original ritual shows how even though some things were changed, the purpose remained and was not doubted.

The slips of paper inside the black box represent fate and power.

The box had wooden chips but later changed to slips of paper because the population increased (Walker 2). This shows how there was a paper for everyone in the village, therefore, no one escaped the fate and fear this tradition brought. When the paper chose the Hutchinson family, Mr. Graves dropped the other slips of paper and the breeze ‘lifted them up’ (Walker 6). This describes a mysterious tone since it shows how it can determine fate at one spot since the other people were now free of fear. The slips of paper have the power to choose the fate of these people.

Old man Warner symbolizes the blind acceptance that these people have for the tradition. When they were talking about villages giving up the lottery, old man warner responded calling them a ‘pack of fools’ (Walker 4). This proves that this man fails to see the perturbation behind this tradition to the point to which he is completely loyal to it. When they chose Tessie by chance, old man warner could no longer wait to throw stones at her saying ‘come on’ multiple times (Walker 7). Furthermore, this man continues to prove how blindly the citizens follow this tradition that they see it as something natural. Old man warner is an example of the blind acceptance the citizens have to this cruel tradition.

Mr. Summers represents the bearer of death in this village. Mr. Summers role in the lottery was to create the slips of paper and organize the lottery in the village (Walker 2). This demonstrates how Mr. Summers was in control of everything that had to do with the lottery, he was basically the one who brought death to the village. Mr. Summers owns a coal company where he has an office where he made the slips of paper and hid the box (Walker 2). In addition, coal is black which symbolizes something negative in this case death and because he’s the owner he’s practically the cause of death. In “The Lottery’ Mrs. Summers plays the role of the bearer of death.

Symbolism in “The Lottery” by Shirley Jackson. (2021, Mar 19). Retrieved from https://studymoose.com/symbolism-in-the-lottery-by-shirley-jackson-essay 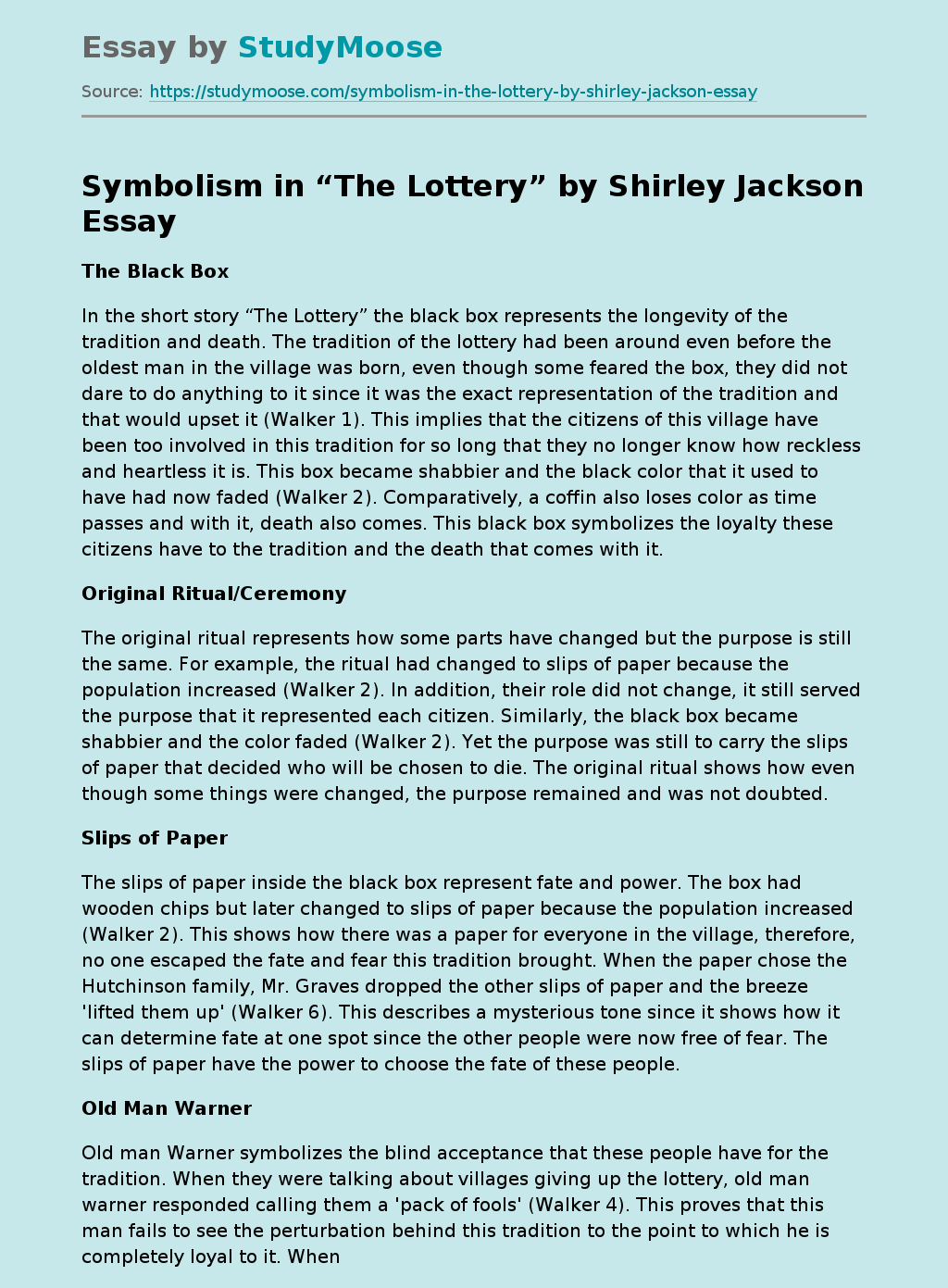