Analysis of “The Lottery” by Shirley Jackson

All our lives, we’ve been told stories of far off places and princesses. Stories of heartbreak and superheroes saving cities. Many of these stories have been written to teach us important lessons and morals that many carry with them throughout their whole life. “The Lottery”, set in a small, isolated town, tells a story where villagers gather to conduct their annual lottery. When Tessie Hutchinson name is drawn it becomes clear what the “prize” of the lottery really is, a stoning.

Don't use plagiarized sources. Get your custom essay on
“ Analysis of “The Lottery” by Shirley Jackson ”
Get custom paper
NEW! smart matching with writer

In the short story, “The Lottery”, Shirley Jackson uses symbols, foreshadowing and setting to create an ironic sense of horror and teach the reader an important lesson of speaking up for what is right.

In “The Lottery”, Jackson captivates the reader by using symbols such as the stones and the black box.

One of the symbols Shirley Jackson uses is the stones. After Tessie Hutchinson’s name is drawn, the villagers prepare for the stoning process, “(T)hey still remembered to use stones.

” (Jackson 7) Stoning is an ancient, cruel method of murder but the villagers continue this outdated ritual because they are afraid of change. The villagers stoning an innocent woman symbolizes what can happen when traditions are not questioned or challenged. Shirley Jackson uses, “The Lottery” to remind us to speak up for what is right, and fight against injustices. Another symbol Shirley Jackson uses to create a shocking sense of horror in, “The Lottery” is the black box. On page 2, the author explains the need for a new box but, “(N)o one liked to upset even as much tradition as was represented by the black box.” (Jackson 2) This symbolizes the illogic of the villager’s loyalty to this tradition, even when change is clearly necessary. Similar to the black box, the tradition has lost its purpose and is starting to fall apart.The Lottery takes place on a clear and sunny summer morning around June 27 in a small village with about three hundred villagers gathering together in the central square for the annual lottery. As a child Shirley Jackson was interested in writing; she won a poetry prize at age twelve, and in high school she keeps a diary to record her writing progress. In 1937 she entered Syracuse University, where she published stories in the student literary magazine. Despite her busy life as a wife and a mother of four children, she wrote every day on a disciplined schedule. “The Lottery” is one of Jackson’s best-known works. In “The Lottery” Shirley Jackson will discusses the movement of the setting, unusual foreshadowing and outermost symbolism to give us an overall point of view from the story.

Not only does Shirley Jackson use symbolism to create a shocking sense of horror but she also uses foreshadowing. One way Jackson uses foreshadowing is through Old Man Warner. When the villagers start talking of the North village giving up the lottery, Old Man Warner refers to them as a, “’Pack of crazy fools.’” And says, “Used to be a saying about, ‘Lottery in June, corn be heavy soon.’” (Jackson 4) This comment foreshadows the fact this this is more than just any other community event. This lottery relates to ancient customs that believe pleasing the God(s) will lead to a good crop season. Another way Shirley Jackson foreshadows the twist ending in, “The Lottery” is through the children gathering stones. In the very first page it says, “Bobby Martin had already stuffed his pockets full of stones, and the other boys soon followed his example, selecting the smoothest and roundest stones(.)” (Jackson 1) Even in the second paragraph the author began to foreshadow the ruthlessness and cruelty of this lottery. Even children are preparing to participate in the murder of an innocent person.

When one thinks of a lottery, one imagines winning a large sum of money. Shirley Jackson uses the setting in “The Lottery” to foreshadow an ironic ending. The peaceful and tranquil town described in this story has an annual lottery every June 27 early part of 1800’s in a small village with 300 people (456). Setting is to describe time and place of the story. The story occurs “around ten o’clock” (456). This is an unusual time because in most towns all the adults would be working during mid-morning. In the lottery an ironic ending is also foretold by the town’s setting being described as one of normalcy. The town square is described as being “between the post office and the bank” (456). Every normal town has these buildings, which are essential for day-to-day functioning. Throughout the story little parts of setting are being told, to give a clearer picture for a better understanding of the story.

Jackson foreshadows a surprise ending. Foreshadowing is to hint of something that would follow with the story. As the story continues the reader is told that school has let out for the summer, and yet the “feeling of liberty sits uneasily with the children” (456), which is strange, for no normal kid would be anything less than ecstatic over summer break. Finally, the children are said to be building “a pile of stones in one corner of the square” (456), which is a very strange game for children to play. All of these hints indicate that something strange and unexpected is going to happen, and they all will make sense once we discuss the story’s final outcome.

The last literature device Shirley Jackson uses is the setting. One way the author uses setting to create a shocking sense of horror in, “The Lottery” is through the lottery being held in the square. In the very first paragraph of the short story, it explains, “The people of the village began to gather in the square.” (Jackson 1) This quote is ironic because town squares are normally where events that bring communities together are held, whether that’s square dances, or fairs. These events are all very exciting and fun, so this sets the reader up to think is just an ordinary day that will end with a positive, happy outcome. However, this is the exact opposite of what happens later, when the story takes an unexpected, dark turn and the town is torn apart by this horrifying tradition. Another way Shirley Jackson uses setting to create a shocking sense of horror in her short story is through the date the Lottery is held. The Lottery’s setting, ‘The morning of June 27th’ initially has no significance to the reader but later in the story, Old Man Warner shares a saying, ‘Lottery in June, corn be heavy soon’. (Jackson 4) This reveals that the timing of the lottery is actually a crucial part of this tradition. Many old religious ceremonies were held at mid-summer time, the timing of the lottery is one of the subtle ways the author suggests that this is an ancient ritual.

Symbolism is also a strong element of the story. The introduction of the black box carried by Mr. Summer (456) is a key turning point showing symbolism, which is anything in a story that represents something else, giving the awful ominous answers to all those foreshadowing hints. When the black box is brought in, it’s said to be a tradition that no one liked to upset. The villagers kept their distance from the box, as though they feared it (461). More and more the town’s peculiarity begins to become apparent. For an example, the names of certain residents hit at the irony and unfavorable events to come. From the author’s extravagant detailing of the town, one would expect this “lottery” to be a chance for one lucky family to win some money. Instead, the winner’s “prize” is death-by stoning In the story Tessie won the prize when Bill, her husband, forced the paper out of her hand (461). The portrayal of the residents at the end of the story is disturbing–they go about killing the “winner” ritualistically, trying to “finish quickly.” (461). They show no empathy at all–they’re simply following an ancient ritual.

Overall Shirley Jackson discusses the movement of the setting, the unusual foreshadowing, and the outermost symbolism in “The Lottery.” The lesson in this story hits pretty hard. The Lottery’s relationship to real life is that sometimes we are presented with traditions that have been adhered to for as long as anyone can remember, and we forget the reason these customs were created in the first place. The problem is that circumstances can change and make these traditions outdated, useless, and even harmful. Overall the main point of the story is that ignorant and indulgent believers can bring death to an innocent person, so therefore we must re-evaluate our traditions; otherwise we’re just letting ourselves be stoned.

In conclusion, Shirley Jackson uses literature devices such as symbolism, foreshadowing and setting, to show the reader the consequence of following blindly. The villagers of the town set in, “The Lottery”, had every opportunity to speak against this obsolete tradition, but their fear of change and going against normality cost the life of an innocent woman. These texts serve as a lesson of the importance of speaking up for what is right, because, though going against social norms can be daunting, with it comes growth and innovation.

Analysis of “The Lottery” by Shirley Jackson. (2021, Mar 19). Retrieved from https://studymoose.com/analysis-of-the-lottery-by-shirley-jackson-essay 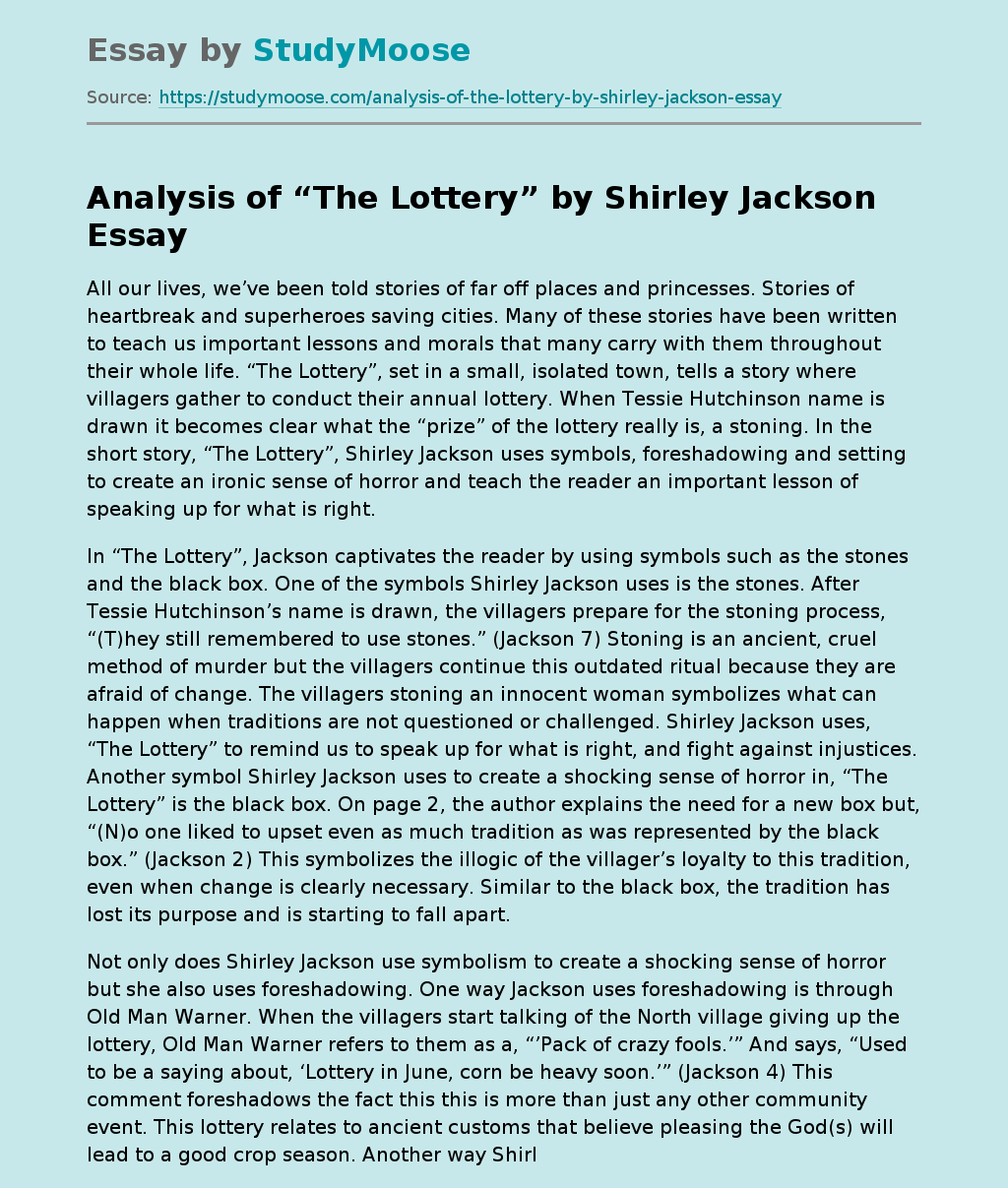