Review of "The Lottery" by Shirley Jackson

Most of the time people follow and adhere to tradition mainly because it is expected of them; rather than practicing the tradition because one understands and accepts the concept behind it. ‘The Lottery’ by Shirley Jackson, depicts the story of a town which has a yearly custom of holding a lottery wherein they pick one resident of the town to murder. Jackson utilizes irony and symbolism to convey how individuals must not follow rituals without an explanation.

Conventions frequently have meaning when initially began, yet, Jackson uses symbolism to show how these customs may lose their importance after some time.

Don't use plagiarized sources. Get your custom essay on
“ Review of “The Lottery” by Shirley Jackson ”
Get custom paper
NEW! smart matching with writer

An image that portrays that thought is the utilization of stones to complete the lottery. At the point when the town, at last, chooses a victim, they generally use the outmoded technique of stoning to murder them. “Although the villagers had forgotten the ritual and lost the original box, they still remembered to use stones.”(222) Jackson utilizes this as a symbol of the extinct and inhumane styles of numerous old rituals.

Even though they could have used a less difficult, approach to execute their victim, they decided to keep using the barbarous, antiquated technique they had been taught to utilize. This speaks to how the lottery, in the same way as other different traditions, is an antique occasion that no longer makes sense to continue, except if one has just learned to proceed with their customs. By having the characters stick to stones that speak to the outdated idea of the lottery, Jackson shows how individuals stick to traditions paying little mind to how old and immortal they may appear.

Jackson uses irony in The Lottery to indicate the theme of not blindly following tradition. One character she uses to indicate the theme is Old Man Warner. Old Man Warner, the eldest member of the village, despises any change of traditions regarding the lottery. When some of the nearby village members entertain the concept of eliminating the lottery for good, as other villages had, he said, “Nothing but trouble in that…Pack of young fools.”(220) Although he remains dedicated to the lottery, he doesn’t know why the lottery started or its original purpose. He still incorporates a powerful voice, and no matter whether or not he knows why the tradition started, the villagers still hear him. Old Man Warner shows that when individuals are taught to think a particular way for his or her whole lives, they’re going to always feel skeptical of any change. Old Man Warner also shows how humans look to elders for advice on tradition, no matter whether or not they honestly are aware of it. Another example of irony within the story is what happens to another resident from the village, Mrs. Hutchinson. Similar to all the other villagers, Mrs. Hutchinson didn’t worry about the lottery as a kind of special event, even appeared late because she wanted to complete her dishes.“‘Wouldn’t have me leave m’dishes in the sink, now, would you, Joe?’”(218) Mrs.Hutchinson explains to the lottery conductor Joe Summers casually. The lottery has lost meaning to her since it never significantly affected her life. When the results of the primary drawing came in for her family, one would expect her to just accept it since the lottery was so normal for them. However, she protested saying that it was not fair. She ended up being picked and killed, all the while screaming, “It isn’t fair, it isn’t right.”(223) Jackson uses that to point out how although the lottery had a horrible conclusion once a year, the villagers can easily forget the horror of what happens during the lottery since they had not been picked. Mrs. Hutchinson merely saw the lottery as another town gathering, so she didn’t consider the grave danger of it until her own death was imminent.

Jackson uses this little village, unwilling to let go of their horrifying tradition, to indicate how residents of the current world refuse to surrender their own traditions, whether or not they benefit anybody. If the people of the village would opt to consider the horrors they were creating, rather than simply looking forward to tradition, they’d clearly see how foolish it was for them to stay participating during this terrifying ritual. By changing bad or unmeaningful traditions, the world can change, but in the condition that, the minds of those who won’t let their traditions go can change as well.

Review of "The Lottery" by Shirley Jackson. (2021, Mar 22). Retrieved from https://studymoose.com/review-of-the-lottery-by-shirley-jackson-essay 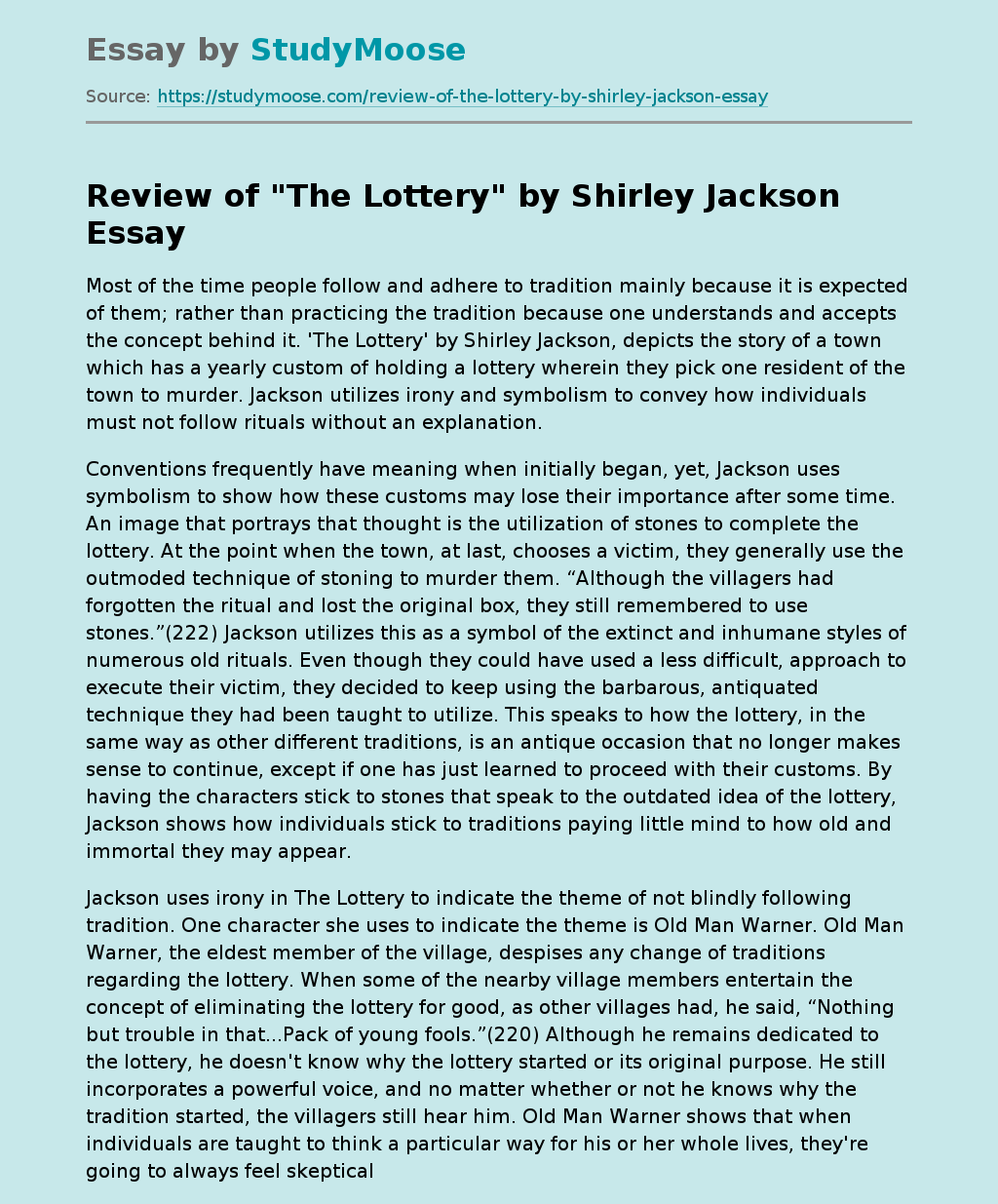