Theme Of "The Lottery" By Shirley Jackson

Irony is used throughout the short story to demonstrate why authority should be questioned. On page 63, Mr. Adams questions Old Man Warner about the purpose of the lottery explaining that in the other village, the lottery is no longer in effect.

Without a reasonable explanation, Old Man Warner shuts down Mr. Adams who obviously does not believe in the lottery. If Mr. Adams would push the issue more, Mrs. Hutchinson possibly would not of been brutally murdered for no reason along with many other people in future lotteries. This comment is ironic because people are afraid to put a stop to something that is obviously injustice to society simply because people are afraid to question authority and tradition.

On page 64, Mrs. Hutchinson yell’s to some other citizen’s stating, “Make them take their chance!” This comment is ironic because she is the one later chosen to die by stones thrown at her from the very people that she is yelling at. Mrs. Hutchinson’s death could have easily been prevented if someone, anyone had the guts to stand up for what they feel is right and justice.

Jackson uses colors to portray the mood of the story by frequently using the color black.

The black box is tradition for the small town this story was based in, the citizens were afraid to question authority and get the box cleaned up, “but no one liked to upset even as much tradition as was represented by the black box”¦the box grew shabbier each year.” The entire mood of the story was very somber, people acted fake, they were afraid to question authority or to be different. One of the papers put in the black box was stained black using coal; this stain represents a somber and evil mood in the story. This is a society where citizens are so afraid to be looked down upon that they will not question an immoral and injustice annual practice know as the lottery. If Jackson would have used the color blue or green, a positive lively color, then the story would not be so depressing and people would be happier in the story. Jackson effectively uses black to portray a sense of unhappiness and depression.

In conclusion, Jackson’s message is clear “” Authority should always be questioned and not taken for granite as well as tradition! Jackson’s use of irony, color and point of view to clearly present her message. She effectively, but casually presents her feelings towards the subject matter throughout the story using literary elements.

Theme Of "The Lottery" By Shirley Jackson. (2016, Jul 11). Retrieved from http://studymoose.com/theme-of-the-lottery-by-shirley-jackson-essay 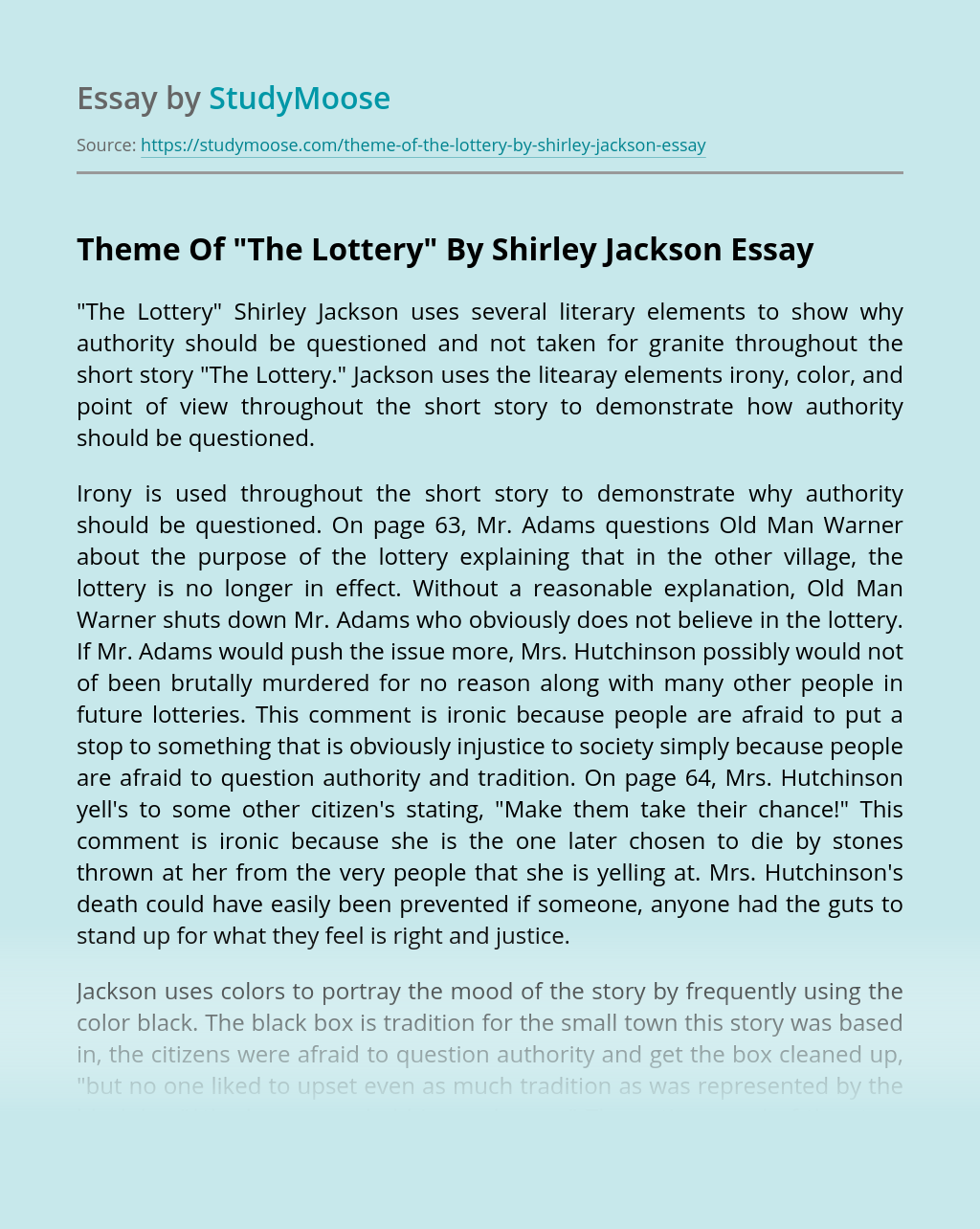 Don’t waste time
Get a verified expert to help you with Theme Of “The Lottery” By Shirley Jackson
Hire verified expert
$35.80 for a 2-page paper
Stay Safe, Stay Original