In the study of development, nurture is defined as the environmental conditions that influence a child’s development (T. M McDevitt and J. E. Ormrod , 2010). A child’s home environment, friends with whom he spends time with, the food that he eats and the types of movies he watches — not to mention the content and or education background – are all the factors that influence his physical, social and cognitive development in both positive and negative perspective. In this paper, I will be focusing on nurture factors and how do these factors have influenced the development of the prominent figures that I have chosen which are Tun Dr.

Mahathir, our very own 4th Prime Minister from Malaysia and Bill Gates, the billionaire, from United States of America. The development that I will be touching on is regarding the physical development, cognitive development as well as the language development.

Read more: xplain how children and young people’s development is influenced by a range of external factors essay

2.0 Tun Dr. Mahathir
Tun Dr. Mahathir was the 4th Prime Minister of Malaysia. He is fondly known as the “Father of Modern Malaysia”. He was born on the 10th July 1925 in Seberang Perak, Alor Setar, Malaysia, but his father, Mr Mohamed B. Iskandar, only registered his date of birth on 20th December 1925. His mother’s name is Wan Mas Tempawan Bt Wan Hanafi. He is the youngest in the family and is very close to his five brothers and sisters. He got married with Tun Dr Siti Hasmah Bt Haji Mohamed Ali on 5th August 1956 and were given seven children.

2
2.1 Nurture factors
2.1.1 Family
Family has always become the priority in an individual’s life. In my humble opinion, every success of a man lies on their family supports and values. This statement is agreed by Tun Dr. Mahathir himself whereby he believes in family values and close family relationship (Fam, Lee, Nawarmani Balakrishnan and R. Rajendran, 2006). During his childhood, Tun and his siblings were taught to behave with discipline in everything that they do (Mahathir, 2011). His father, Mr Mohamad B. Iskandar, is the first Malay Headmaster of the Government English School in Alor Setar. Whenever Tun Dr Mahathir and his siblings came back from school, their father would go through their homework with them. Even during the holidays, their father would sit down with them, patiently tutoring them and setting a timetable for them to do reading, school work etc. He would teach them the way that he taught his students in school.

Apart from that, Tun and his siblings lived in awe of their father even though he never laid a hand on them. This is because the sound of their father’s cough was enough to send them scurrying back to their books and homework (Mahathir, 2011). They all studied at the big table in the front room and will only stop for dinner. It is such discipline that Tun Dr Mahathir grew up to be a well-mannered and educated man with good values. Thus, I would say that family plays a very important role to develop a child’s cognitive development. In fact, family is the biggest influence during childhood, as the children view their parents as their role models.

3
2.1.2 Education
Besides family, education also plays a vital role in the development of Tun Dr. Mahathir. Despite the informal education that he got from his own family, he also went to school to get his early education. He started schooling when he was 5 years old in a Malay School in Jalan Seberang Perak. He has the determination of wanted to have a better education than what most Malays had at that time. For that, he went to English School and passed his examination. At school, the students were not allowed to speak any languages other than English language. So with such practice, Tun Dr Mahathir developed his language development and is able to converse English language fluently. All these happened during his primary school days. After he finished his primary school, he then went to Sultan Abdul Hamid College to do his secondary education.

However, during that time, the Second World War started. As a result, it was difficult for him to study and he decided to seek for a job. So, he started his business mind and thought of something to sell. Together with his two friends, he set up a stall selling coffee and ‘Kuih’ (Malaysian cakes). He made a good business with the stall and soon was able to sell the stall for a good sum of money. This matter showed he has a good acute business sense. After selling the stall, he moved to a better location at a small complex. He then thought of selling fried bananas. He made money selling the fried bananas and also made many friends. This incident proves that, at a very young age, he is able to think, strategize, and find solution for any problems that occur.

4
Indirectly saying, Tun was exposed to cognitive skills through his own experiences not only from education but also from the business perspective. In 1945, after the Second World War ended, Tun Dr Mahathir resumed his education at Sultan Abdul Hamid College where he sat for and passed his Cambridge Examination. He did a lot of reading on political issues in his father’s huge library in school. He gained a lot of information from his reading. From here, it is proven that Tun also developed his cognitive skills by reading books especially in political issues. In school, joining extra-curricular activities was part of the system. Therefore, Tun joined the rugby club although he was not very interested in games and sports but then he found out that he quite enjoyed playing rugby (Fam, Lee, Nawarmani Balakrishnan and R. Rajendran, 2006).

From here, I would say that school activities play a significant role in shaping Tun physical development such as grass motor skills, which includes running. Finally, in the year 1947, after he had gone through much experience in working, he then continued his tertiary education in medical field at the King Edward VII Medical College, Singapore. With all the skills that he got from early of his primary school up to secondary school and working experiences, I do not think Tun will face a problem in his studies especially when it comes to speaking skills and finding solution to any problems.

5
3.0 Bill Gates
The way Bill Gates was brought up is different from Tun Dr. Mahathir. Unlike Tun, his education plays a significant role in shaping his development. In contrast, after I went through Bill Gates’s biography, I found out that it is his peers that have influenced his success. He and his partner, Paul Allen, built the world’s largest software business called Microsoft. In the process, Gates became one of the richest men in the world (The Biography Channel Website, 2004). There are two nurture factors that contributed to his development. The nurture factors are as follow:

6
3.1 Nurture Factors
3.1.1 Family
Bill Gates was born on 28th October 1955, in Seattle, Washington, United States of America. His real name is William Henry Gates III. His father’s name is William Henry II who works as an attorney and his mother’s name is Mary Maxwell, who works as a teacher. Bill gates grew up in an upper middle-class family with two sisters: Kristianne and Lubby (The Biography Channel Website, 2004). The Gates family atmosphere was warm and close and all three children were encouraged to be competitive and strive for excellence. It is such discipline that made him a very competitive person. For example, Bill showed early signs of competitiveness when he coordinated family athletic games at their summer house on Puget Sound (The Biography Channel Website, 2004). Bill Gates was a voracious reader when he was a child (The Biography Channel Website, 2004).

He would spend most of his time by looking for information in reference books such as encyclopaedia. Gates weird behaviour made his parents more concerned of his academic achievement. Thus, he was sent to Seattle’s Lakeside School. As a result, at age 13, he blossomed in nearly all the subjects and also doing very well in drama. At a very young age, his cognitive development was trained by his family. Thus, by that kind of environment – competitive among his siblings, excel in academic field – has made him become one of the most influential persons in the globe. 7

3.1.2 Peers
As I mentioned earlier, Bill Gates and his business partner, Paul Allen, both shared the same interest over computers. It is through peers that Gates slowly developed his cognitive skills in computer field. It all started when both of them eventually met in high school when their school offered computer class for the students. Although the two were very different in their personality – Bill was feisty and combative, in contrast, Allen was more reserved and shy (The Biography Channel Website, 2004). But all in all, I believe, with such differences that have made them a good companion. At the age of 15, Bill and Allen went into business by creating “Traf-o-Data”, a computer program that monitored traffic patterns in Seattle. Believe it or not, their efforts had made a total profit of $20,000.

Another big project that they had worked together was with Micro Instrumentation and Telemetry Systems (MITS). Both of them worked days and nights until they got hired by the company. Until in the year 1975, Gates and Allen formed a partnership. This partnership was called Micro-Soft, a blend of “micro-computer” and “software”. In a child’s development, peers play a vital role in shaping any abilities or talents that a child has (Barnes. S, 2014). As for Bill Gates case, he enjoyed making friend with Paul Allen because both of them shared the same interest over computer. Plus, their interest does not even affect their achievement in academic. In fact, Bill Gates excelled in his studies.

8
4.0 Conclusion
In brief, after I went through both the prominent figures’ biography, I found out that the nurture factors of a child comes hand in hand with physical development, cognitive development as well as language development . Due to the fact that both the prominent figures differ from the way they have been brought up, it is clearly evident that nurture factors do play a vital role in their development. One of the biggest nurture factors in a child’s development, I would say, is family. In social studies, family is one and the most important agents of socialization (Macionis, J.J., 2012). Through the teaching, support, surroundings and values that the family have, it will somehow and eventually determine a child development. If the family have a good background – despite the parents’ academic achievement, enough nutrition being given by the parents, etc – indirectly, a child will face zero problems in any aspects of their development. 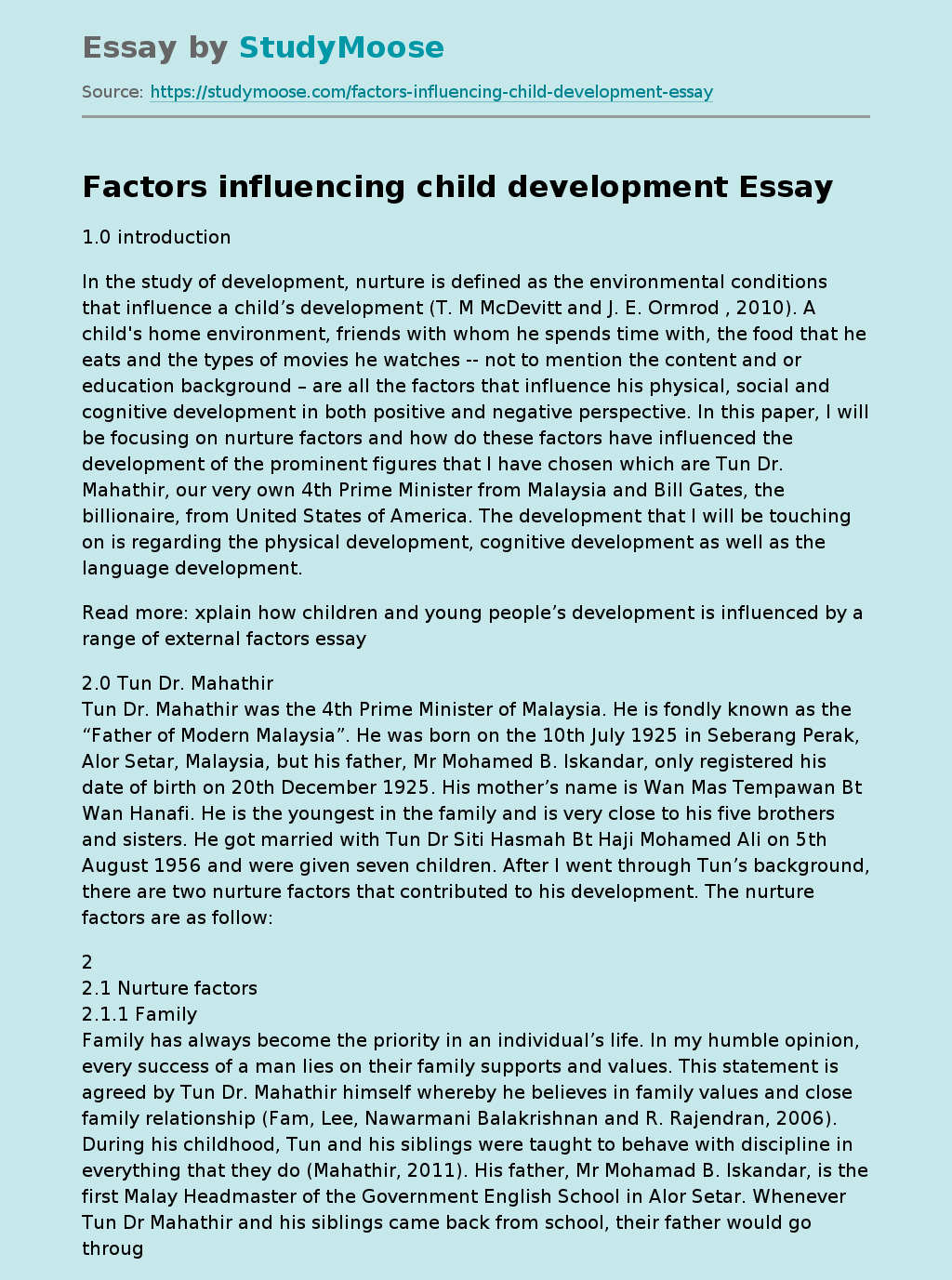