INTERNET CENSORSHIP
Internet censorship is subjected to governmental control to keep programmes inoffensive to the public. It controls the ideas and information in a society. The question is if government should be allowed full authority on the internet. Is it completely fine to allow the government to decide the information we access and does this infringe on the rights of freedom and speech? First of all, there are the people who side with internet censorship.

Don't use plagiarized sources.
Get Your Custom Essay on Internet censorship Just from $13,9/Page

There is certain vulgar and offensive material put on the internet which can cause divisions between the society and offend some of the people. For example, videos and articles against a religion or culture can cause problems between citizens within a nation and so such information has to be censored. Censoring material that insults a religion helps protect society from disputes and thus doesn’t qualify to be called stealing someone’s rights. Moreover, censorship is important to keep children from corrupting their minds.

Inappropriate videos and images put on the internet can be seen by the youth which is why this material should be removed by censoring.

This act by the government ensures children don’t get to see vulgar material which can destroy their innocence. So, in a sense, government helps to protect children and in this case freedom of such information cannot count as it is too mature for children. Furthermore, some people argue that internet censorship is necessary to preserve national security. Without censorship, it is impossible to maintain secrecy of information and protect it from enemies that can use it against the nation. Adding on, other forms of illegal material being communicated are stopped by censorship. Illegal downloading of copyrighted content is a crime and internet censorship helps the government to catch criminals that indulge themselves in this act. As well, e-mail containing dangerous information like bomb plans have no right to be spread around the internet and so discarding them is the right thing to do. This shows that the government does not violate rights of freedom of speech by actually protecting its public from threatening information. However, others think that internet censorship is a violation to rights of freedom of speech. It limits free access to information which causes the society to foster ignorance in its citizens. Through this ignorance, people would not have knowledge and awareness on issues that take place around their environment. this is not fair as everyone should have the right to full access to information on the internet. Additionally, there is the history of censorship abuse.

The government can remove certain material that gives a bad image of it to the public meaning people have no freedom to criticize the government or voice their opinions. In this corrupt information can also be spread around the internet by the government and this gives wrong information to the public. In China, for example, videos and articles on human rights violation are blocked by the government from the eyes of the world. If people cannot freely express their opinions on such critical subjects, then there is no use of the internet as it limits freedom of speech. Furthermore, some governments put strict rules on internet usage like blocking social sites from the network. These include facebook and twitter. For instance, in China, facebook is banned and this affects the citizens and people owning facebook. Facebook loses more users from China. Also this limits communication and thus transfer of information is narrowed to usage of phones and letters. People will also find it difficult to interact with people outside the nation. This is a serious act against freedom of speech and shows government uses censorship to restrict passing on of information which signifies they have something to hide.

In conclusion, government should censor material to the extent where it becomes a threat for the community. Otherwise censorship of material that contains ‘offensive’ vocabulary like breast cancer is limiting freedom of speech as it is accessed by people for knowledge and it is not going to harm anyone. Besides, for child protection, there is already software that is available to block offensive sites. This shows that government has no right to censor the internet by removing material that can actually be helpful to the people. The government misuse its control over the internet to limit people’s ideas and thought capacities which violates freedom of speech and information. 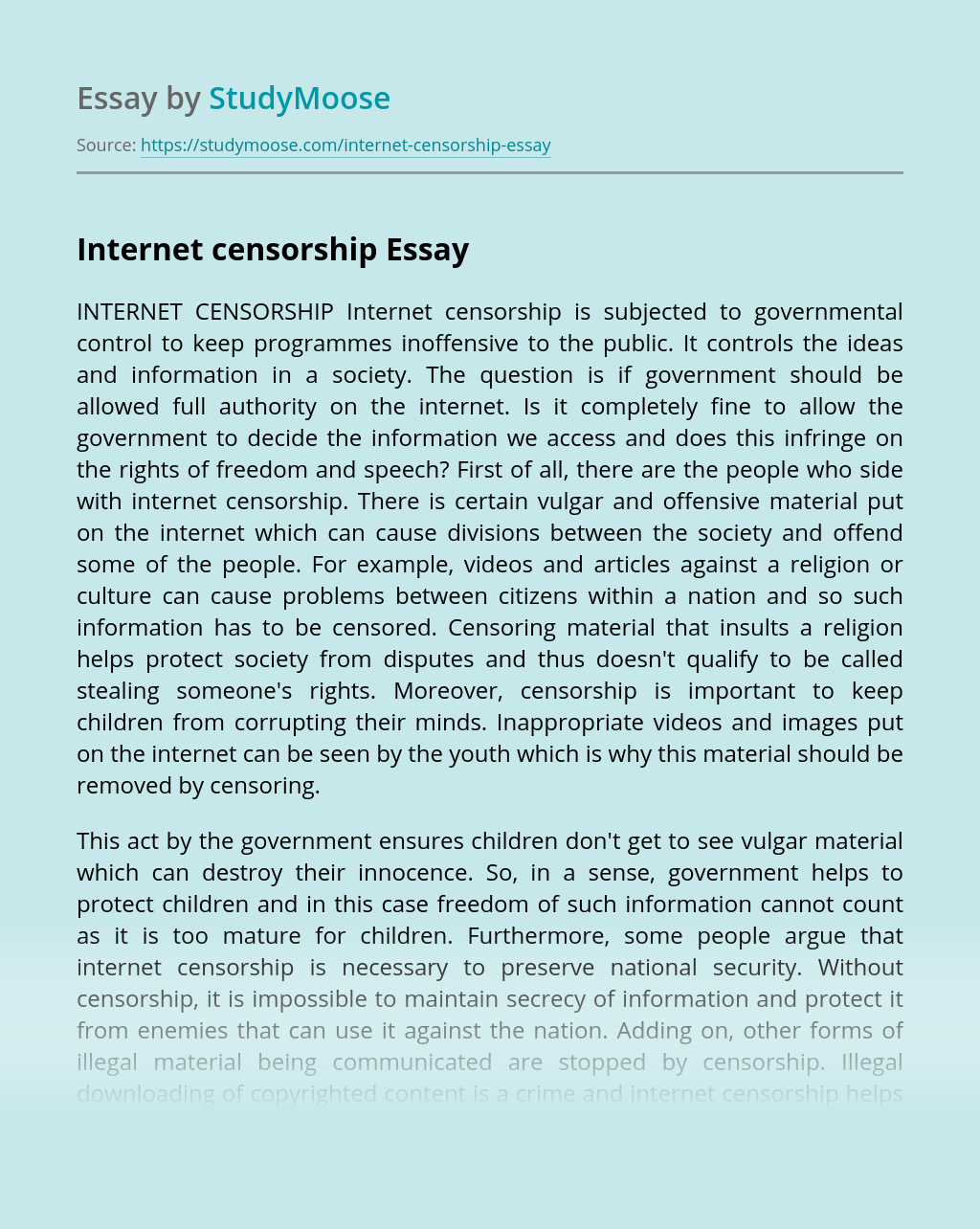 Rate this post Imagine a place where you had access to any information you needed, at any time. Some might say that this place may not exist, but others could say that this defines the Internet. The Internet gives you access to all sorts of wonderful knowledge and other content, but with good comes some...

Rate this post Argumentation Essay: Facebook When a possible employee is in the process of being hired, his or her employment should be based on a social media network such as, Facebook. The main points for this position consists of professional versus social, freedom of speech versus censorship, and a person’s true identity behind closed...

Get Essay
Whether The Internet Should Be Censored

Rate this post These days the Internet has advanced at an alarming rate in the last 20 years. The Internet is an electronic communications platform that connects computer networks around the world. It is commonly recognised that Internet can help people finish what they would like to. Although plenty of people feel that Internet should...

Rate this post The individual liberty concept has actually changed significantly over the years from the harm concept to the concept of basic rights. Cobley suggest that in this day and age, these principles will not enable us to have optimal liberty. On the other hand, recommend that only by providing up all our liberty...

How To Stop Violence In Schools

Rate this post We all know there is violence in schools. Like in the past a couple of years there has been many shootings in school and I wonder how we could stop that. We could have a police officer on campus at all times. We could also have a group of students be a...

Rate this post Since time immemorial, all movements aspiring for a goal had to do something to attain it. Citizens of colonized countries had to organize themselves and fight by means of revolution to attain freedom. Slaves who aspired for freedom had to fight for their freedom. Employees who aspired for better terms and conditions...

Rate this post Privacy is a right all people have, free from being watched and observed or even disturbed by other people. Privacy allows us to do as we wish, to withhold information or talk about certain things that no one needs to know besides those who are included. However, the NSA decided to ignore...