Persona and Deeds of Napoleon Bonaparte

Napoleon was nothing more than a tyrant as he exploited France in pursuit of his own ambitions to achieve a dynasty in his name. A dictatorship is often associated with repression and the workings of a police state. Both of these were, in fact, being used in France. For example Napoleon vigorously censored the press and even the theatre. When Napoleon took power, Paris had a vibrant newspaper business, by the end of his reign there were only four newspapers left due to his denial of a free-press and all of these had been under his control.

Don't use plagiarized sources. Get your custom essay on
“ Persona and Deeds of Napoleon Bonaparte ”
Get custom paper
NEW! smart matching with writer

These newspapers were censored and used by Napoleon for propaganda. He also had spies and informers working for his Ministry of Police, he used special courts and arbitrary imprisonment which really supports the concept of a police state under a dictatorship.

Implementing these resources allowed Napoleon to repress any opposition to his rule and crush any civil unrest Considering these facts only it would appear that Napoleon was nothing but a tyrannical dictator , but , this would not necessarily be a fair judgment as throughout his reign he continued to use certain administrative bodies which limited his freedom of action , such as the Senate and the Legislative Body which suggests he didn’t have or want overall power as a dictator for matters such as law making .

He also introduced the Civil Code , which assured legal rights , he also instituted a number of reforms that brought genuine benefits to the French people , such as religious toleration , which not only followed revolutionary ideal of freedom and equality as anyone was allowed to practice their chosen religion , but would also have had popular support in France .

Under Napoleon, the upper reaches of representative government had no serious power and were reduced to supporting Napoleon.

The Senate, packed with Napoleon’s supporters, did largely what it was told, cashing their pay and picking up honours. The Tribunate was heavily purged in 1802 after criticising Napoleon, and remained careful afterwards never to speak too loud, until it was shut in 1807. Napoleon thus faced little opposition from politicians until the events of 1813-4, and at the end the senate did finally try and evict their great benefactor from power.

Crucially, most of these positions were filled by people who had been involved in revolutionary government. However, The First Consul found solutions for a desperate situation: he brought about religious pacification with the Concordat in 1801, restored finances (creating the Banque de France and the franc-germinal), reformed the administration (passing the law of 28 Pluviose, An VIII creating the prefects), won victories abroad, bringing about an end to ten years of war.

It is true, as people tend to demonstrate nowadays, that this success benefited from some measures and victories of the Directoire; but there is no denying that Bonaparte brought solutions to the problems inherited from the Revolution, something which the Directoire had not been able to do. Heredity did not have much meaning since the new emperor had no children and Josephine was spreading the rumour that he could not have any.

The key point here was to avoid a vacuum of power which would have as a consequence a restoration of the Bourbons, a possibility that had terrified the ex-members of the Convention ever since the threatening proclamation of Louis XVIII in Verona, after Louis XVII’s official death. Thus, a continuity would be maintained in case of accident or successful murder attempt against Bonaparte. The solution remained provisional simply because it was impossible to find a solution which would ensure the inheritance of the Revolution.

Napoleons reforms did benefit France greatly. For example one of his economic reforms, The Bank of France, established in 1800, restored stability to the country by giving a monopoly of note issue to the new central bank and backing it firmly with gold and silver. Labour was also controlled. Napoleon’s ideas on economics were rather old fashioned. He even considered restoring the guilds. The ban on trade unions remained though and passbooks were introduced to limit workers’ freedom of movement.

The final point of Napoleons economic management was that the control of prices and the supply of food was introduced. There were no bread riots to threaten his rule. The export of corn was firmly restricted and maximum prices for bread and flour were introduced in 1812. He was aware that hunger was a much greater threat than the desire for liberty. Napoleon himself was rather broad-minded: he once said, “If I were governing Jews I would restore the Temple of Solomon”. However, he realised the value of organised religion as a means towards social peace and order: “The people ust have a religion and that religion must be in the hands of the government”. The result was the religious settlement of 1801: the Concordat, which said the Catholic faith was recognised as the religion of the great maj ority of the population’ and the clergy were to be paid as state officials. Also purchasers of former Church lands were guaranteed possession. However, so that he should not be seen as restoring Roman Catholicism Napoleon attached the Organic Laws to the settlement.

They included a charter of Protestant liberties, confirmation of the subjection of the Church to the secular power in France. In fact, the Concordat endured even when Rome was annexed in 1809 and the Pope became a French prisoner. To conclude, Napoleon ruled like a dictator during his rule of France between 1799 and 1815 as he used censorship and the secret police etc to remain in power however his reforms did bring genuine benefit to France, however the term ‘enlightened despot’ might be more suitable to describe his nature.

Persona and Deeds of Napoleon Bonaparte. (2016, Sep 20). Retrieved from http://studymoose.com/persona-and-deeds-of-napoleon-bonaparte-essay 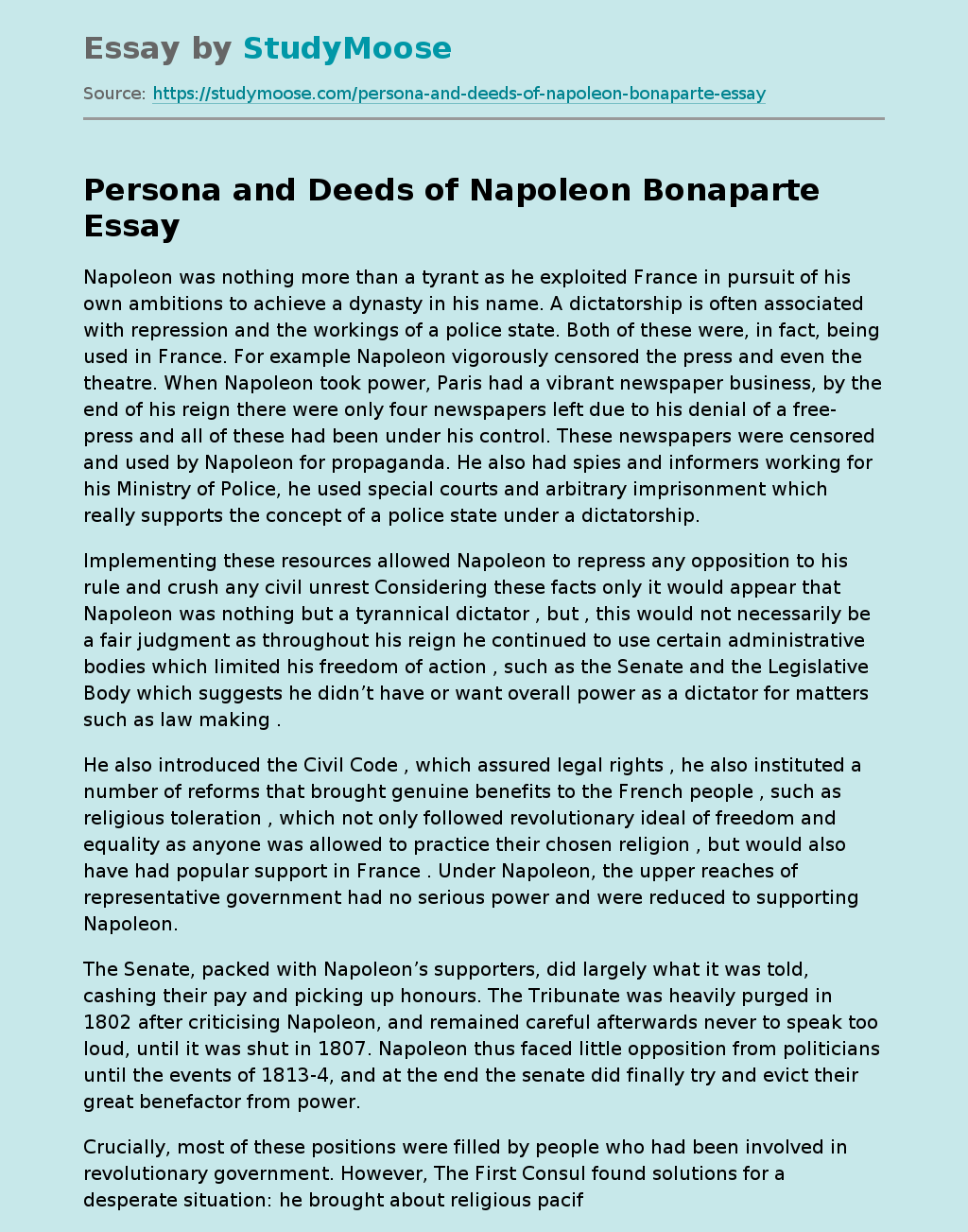