The Internet provides the non state and state actors with

The Internet provides the non state and state actors with advantages particularly actors who exhibit weaknesses and are poverty striken. Through state organisation movement groups and individuals who may present their positions directly to the world themselves. This results in the cultivation of virtual communities which are in support and the spreading of messages is aided. The qualities of the internet as being a weapon are shown in that the internet may be used to attack and discredit forces which are hostile.

Don't use plagiarized sources. Get your custom essay on
“ The Internet provides the non state and state actors with ”
Get custom paper
NEW! smart matching with writer

Actors may respond immediately through the internet immediately to address challenges and occurrences which are happening and advantages attached to events. Failure to utilize the internet as a tool which is useful is a disadvantage as it means one is limiting themselves from a tool for engaging in diplomacy and foreign policy.

An equally pertinent dimension of media which is considered less frequently in its influence is their anti-war movements relationship. In the absence of elite discord and within reasonable democratic states such movements may be the most important buffer against war within civil society.

The media-movement relationship is asymmetrical. Media is needed by movements to mobilize support, attract new supporters and validate their political existence. Far more than vice versa (Gamson, Wolfsfeld 1993). The media plays an important role though it is contradictory at every stage of their organizational self-maintenance trajectory, their emergence and success when foreign and political policy elites are united around a war policy dominant media are likely demonize anti-war dissent or to trivialize it (Gitlin 1980, Hackett 1991).

Attempts have been made for the promotion of peace through the media in Africa. For example Radio for Peace-Building Africa (RFPA) founded in 2003 is a programme by Search for Common Ground an international non-profit organization. The following are the countries in which RFPA is operated: Togo, Central African Republic, Uganda, Tanzania, Senegal, Nigeria, Niger, Sierra Leone, Liberia, Burundi, and Kenya. Working on the assumption that radio is the most accessible form of mass communication in Africa RFPA trains journalists in conflict resolution, peace building and acting on commonalities. As stated in their achievements 2010 RFPA 100 countries are represented by more than three thousand members across Sub-Saharan Africa and beyond. They have trained local radio station personnel and carried out over 90 workshops (Radio for Peace-Building Africa 2011).

An exploration of positive media contributions to ending violence and peace building in Kenya as a whole aids in showing the nature of media as a double edged sword. If the media have played an important role in breeding violence it seems reasonable to examine the prospects of the reverse perspective. Furthermore if the media are usually found to support forces that lead to violent conflict it can also be said that the media have the power to influence the activities that promote peace in the society. Prince, Thompson 2002; Allen and Seaton 1999) suggest that while the media have been prominent contributors to every post-Cold War conflict their role in post conflict peace-building and social development has not been apparent. McGoldrick (2006) posits that elsewhere however, recently there have been enough proves to accept the idea regarding the use of role that the media have played in peace-building. For instance, in Burundi, Bosnia, Croatia, Cambodia, Macedonia Israel/Palestine and Rwanda there are documented positive accomplishment through the role of the media of initiated projects of post-conflict recovery.

RFPA has also over the past seven years has in its areas of operation promoted peace through levels of collaboration that it has established between the media, civil society and the government. The identification of underlying causes of conflict and war was increased as well as the access to policy information by the public. According to Radio for Peace-Building Africa:Achievements (2012) the achievements that they have made also include the use of media to foster communication between the civil society and policy makers.

In Kenya in the East African region media like that in Rwanda has been scrutinized as a perpetrator of political violence at the level of international law. The post 2007 crisis serves as a good case to exemplify the process from conflict to peace-building. Firstly it illustrates that themedia has a double role as a distructive and constructive agent and provides a link between human rights and media freedom. Secondly this paper explores challenges of media freedom within fragile democracies where poverty, politics and ethnic differences can influence the media agenda.

The effect of mass media in forming and shaping the view of people in recent times especially the radio due to its affordability, accessibility and availability as compared to computers (social networks e.g. Twitter, Face book and YouTube) and TV has contributed immensely to the development of a country. Inferring to the above contributions of the mass media and many achievements in Kenya, it can be concluded that the mass media actually does assist in building the ideals of the society and social improvements. By reporting progress activities and systematically monitoring the performance of institutions of the State and of the government by guiding and dispensing of socialization and by entertaining its audiences through interesting programmes. Against this background the use of phoning-in sessions has been utilised by many media houses aiding in capacity building programmes to enhance public participation.

These programmes are also inspired by the need to deepen governance, improve and democracy. Notwithstanding, none or little concern has been given to programmes that are geared towards peace-building. Supporters of censorship refer to the Somalia crisis as the ultimate harm of media involvement and apotheosis to the abuse in issues of international governmental affairs. According to a congressional committee chairman the pictures of the children who were starving and not policy objectives got them into Somalia in 1992 and consequently pictures of U.S. causalities not the completion of our objective led us to exit Somalia. Here, well organized lobbyist and humanitarian agencies exploited the power of the media to force a quick response from President Bush to address the civil war at hand in the African country of Somalia. In reply to the American public’s vocal support Bush implemented immediate ground troops to assure assistance and aid to the suffering women and children. Unfortunately in the President’s haste to respond to the outcry of the American people his staff and fellow government agencies were unable to inspect and evaluate the situation appropriately. As such the ground troops were poorly enforced and tribal militias in Somalia began to fight against and kill American troops. The news media soon began to show pictures of wounded and dead soldiers and as quick as the public put American forces in harms way they demanded their return.

In what some consider a complete failure in appropriately responding to the task at hand the President succumbed to media and public pressure prematurely withdrawing forces to once again leave the victims to remain under the control and governance of the ruthless tribal authorities. Hudson and Stanier in their book War and the Media summarize the fault of the communication industry in this crisis by stating that the well-intentioned American intervention in Somalia under the auspices of the United Nations turned out to be an almost unmitigated disaster. If one was to single out one factor which led to this situation it would be the fatal consequences of the oversimplification of a series of extremely complex problems and the widespread arrogant belief that communications demand decision-making on the basis of information which by its very nature cannot possibly tell the whole truth . In its relentless quest for instant sensation the media must bear some responsibility for this state of affairs.

Again one cannot solely condemn the media for their involvement in the war as the reason behind such a military failure. However, with media images flooding the television screens across America it is not a surprise that the American public responded and responded quickly to the atrocities at hand. And while quick and effective action is ideal it always takes time to examine the situation at hand especially in a foreign land to best utilize our military resources efficiently and successfully.

In summary, the influence of the media on society has attracted international agencies closely involved in peace-building since the early 1990’s (Ross, 2002). The media can contribute to peace by engaging in credible reporting, representing balanced opinions in its editorial content and opening up communication channels among parties in a conflict. It can also identify and articulate without bias the underlying interests of warring factions. By doing so, the media is capable of disseminating information that builds on the confidence of stakeholders in a conflict.

Censorship continues to be a possibility in limiting the control and power of the media but other avenues seem to be more appropriate. The United States of America is known for its universal freedoms to all its citizens in accordance to the Constitution. Freedom of press is one enumerated freedom that will never be taken away from the people. As such, one possible solution rather than limit the domestic media is to expand the media on an international level. If government officials fear that the media industry constrains there agenda with biases open available communications to European media and further abroad. As such, there is a variety of opinions available for the public’s consumption. It is obvious that with such a multitude of media sources, domestic and abroad, competition will be fierce and the power to persuade will be distributed so widely that no one source of media can alter the perceptions or opinions of the citizenry.

In conclusion often facts, backgrounds and different perspectives tend to go missing in traditional conflict reporting. Due to lack of time, space and resources, media concentrates on who threw the stone and does not seek out to explain the circumstances in which this stone was thrown. Mass communication has transformed civil society influencing every aspect of governance by directing the will and opinion of the people. It would be naive to think that the media alone can bring about peace. At best they can contribute a series of actions leading in the long-term towards establishing peace-supporting social structures by defining or reframing conflicts, initiating consensus-building and building trust within and between different communities. There are therefore multiple opportunities for the media to play a constructive role in conflict transformation. Through their work the media can strengthen dialogue processes by introducing and anchoring important issues in national and local discourses. They can help to break up stereotypes of victims and perpetrators and build up the public’s knowledge about political decisions relating to peace deals and the like thus making potential transformation processes more participatory. They can raise awareness of the psychosocial effects of conflict. Through their work they can also support reintegration processes of ex-combatants including child soldiers at the community level.

The Internet provides the non state and state actors with. (2019, Nov 22). Retrieved from https://studymoose.com/the-internet-provides-the-non-state-and-state-actors-with-example-essay 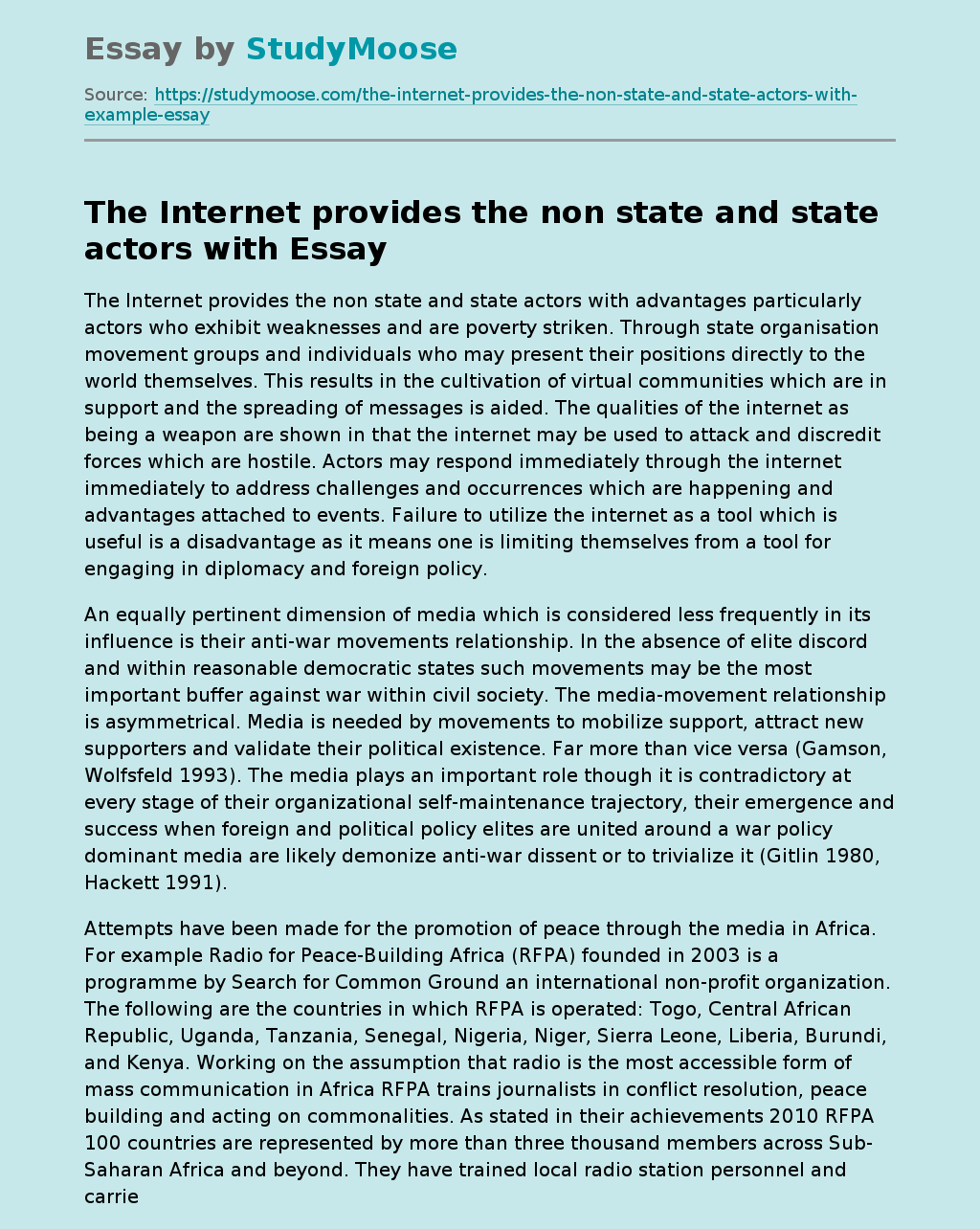