Effect of Corporal and Non-Corporal Punishment

The present investigation attempts to study the effect of corporal and non-corporal punishment on academic achievement of elementary school children with reference to gender and Board of education. A random sample of 180 elementary school children belonging to the age group of 10 years, both boys and girls hailing from CBSE, Matriculation, State Board schools were taken for the present study. A questionnaire was employed to collect the required data from the children. The questionnaire consists of two parts.

Turn in your highest-quality paper
Get a qualified writer to help you with
“ Effect of Corporal and Non-Corporal Punishment ”
Get high-quality paper
NEW! AI matching with writer

The first part of the questionnaire starts by listing direct beating of the student by the teacher. The second part lists the In-direct punishments, which enumerates non-corporal punishments. The data obtained were statistically analyzed using mean, standard deviation, student’s t-test, analysis of variance (ANOVA) and correlation coefficient. The result indicated that punishment does not have any effect on academic achievement of CBSE and Matriculation school children, whereas, punishment has a positive effect on academic achievement of State Board school children.

Discipline is an organized, regulated, orderly way of life. It helps to direct the child’s energies into useful and socially acceptable channels. Discipline is also society’s way of teaching the child moral concepts and behaviour approved by the group. Every child needs to be helped to understand the values of discipline through appropriate experiences. He must learn to confirm to the expected patterns of behaviour and customs in an acceptable manner, use freedom wisely and distinguish between ‘safe’ and ‘unsafe’ actions. The ultimate goal of discipline is self-discipline.

The authors can be contacted at J.B.A.S College for Women, Teynampet, Chennai-18. Discipline is defined as a mental and moral training, obedience to rules, correction and/or chastisement.

Techniques, which are used to inculcate discipline, are of three broad categories: authoritarian, democratic and permissive. In autocratic pattern the teacher is the boss, gives the orders and sees that they are obeyed. In this situation a child feels frustrated and often shows hostile behaviour.

Under the democratic system members of the group have a share in determining the disciplinary policies and controls within the group. In a democratic, cooperative atmosphere the students are not under the pressures that bring on anxiety and fear. Therefore they are friendly and conscious of group needs and welfare.

In permissive pattern the group or members of the group are primarily responsible for determining the controls and for self-enforcement of the controls. There are teachers who through mistaken ideas of what democratic discipline involves do let their students take too much responsibility in establishing controls.

The term punishment comes from a Latin root meaning “penalty” and “pain.” Punishments are one factor in schools, efforts to maintain discipline though to administer a punishment means that all else has failed.

Achievement is the amount of knowledge derived from learning. The child gains knowledge by instruction he receives at school. Classrooms are organized around a set of core activities in which a teacher assigns tasks to pupils and evaluates and compares the quality of their work. The school provides a wide variety of achievement experiences than does the family. Academic achievement is important because it is strongly linked to the positive outcomes of children.

On studying the attitudes and perception of students on corporal punishment in the public elementary grades, it was found that significant differences between grade levels are apparent as specified by the number of times corporal punishment was chosen.

In a study on Corporal punishment and children’s academic achievement, it was found that, children who are spanked perform poorly on school tasks compared to other children.

Tool: The Punishment Frequency Assessment Scale, a questionnaire, originally developed in the year 1972, was adapted, revised and revaluated by the authors in 2004, was used in this study.

Procedure: The Punishment Frequency Assessment Scale (Revised) was distributed among the children by seeking the permission of the Head of the Institutions. The questions were read out, proper explanations were given, doubts were clarified and the children were asked to give their response. Their answers ranged from often, sometimes to never. The time taken by the children to answer the questions was 15-20 minutes.

Academic Achievement of the pupils was taken into account to relate with punishments, Board of school education, and gender. II terminal and I terminal examination marks obtained by each child were taken for the study. The collected data were tabulated and scored. Then they were subjected to statistical analysis using mean, standard deviation student’s t-test, analysis of variance (ANOVA) and correlation coefficient.

In an analysis, it was found that punishment doesn’t have any effect on academic achievement of the students.

Thus it can be concluded from the present investigation that there is no relationship between punishment and academic achievement of CBSE and Matriculation school children, whereas, in the case of State Board school children punishment improves their academic achievement. However punishment should not be considered as a major criterion to improve academic performance of children. Extra care like, additional coaching classes and individual attention will be more effective.

Valya, T. (1999). “Discipline and punishment: What is the difference?” Virginia State University.

Effect of Corporal and Non-Corporal Punishment. (2016, Nov 20). Retrieved from https://studymoose.com/effect-of-corporal-and-non-corporal-punishment-essay 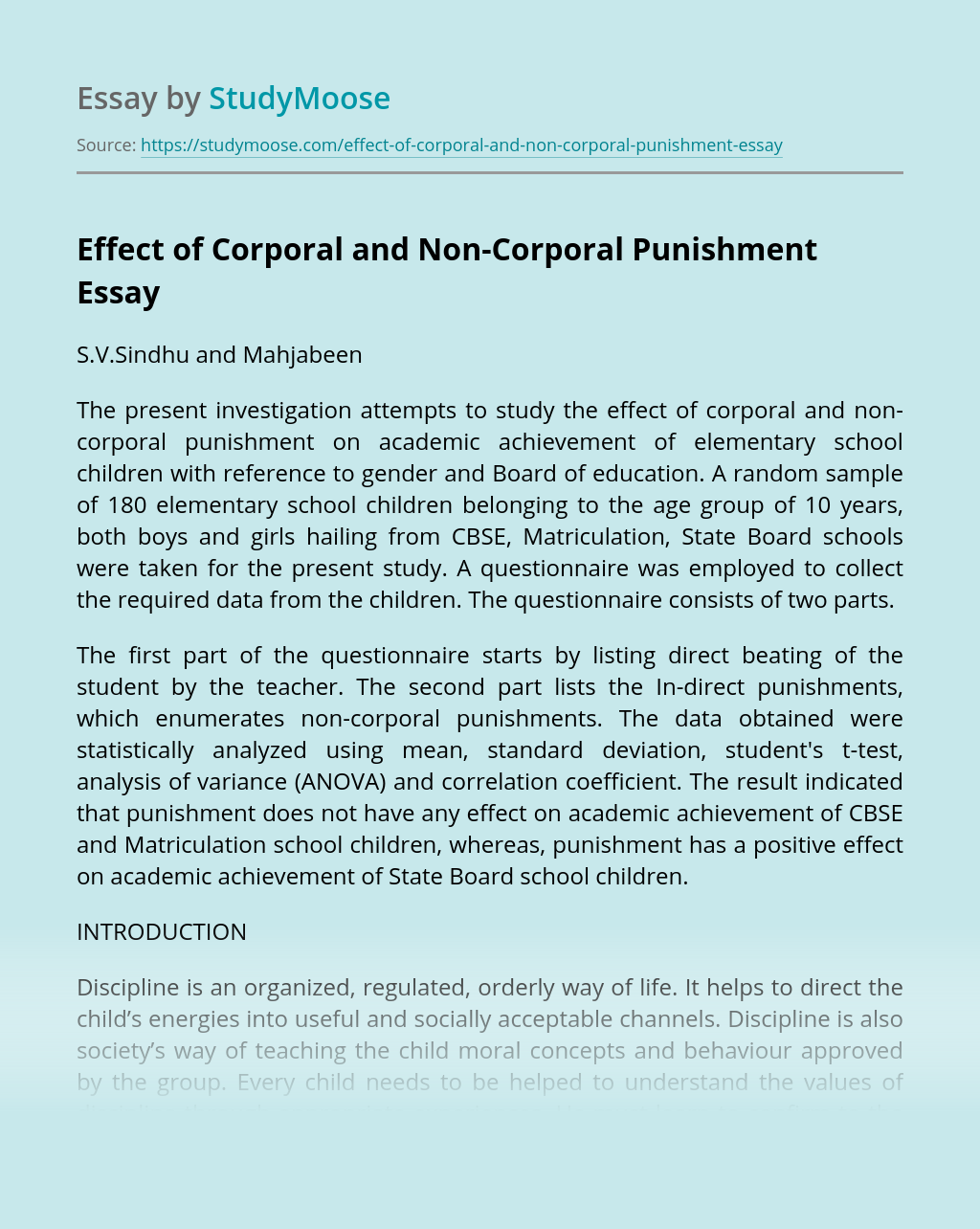 Turn in your highest-quality paper
Get a qualified writer to help you with
“ Effect of Corporal and Non-Corporal Punishment ”
Get high-quality paper
Helping students since 2015
Stay Safe, Stay Original