What is Corporal Punishment?

According to the UN Committee on the Rights of the Child, in its General Comment No. 8 (2006), corporal punishment is defined as “Any punishment in which physical force is used and intended to cause some degree of pain or discomfort, however light. Here we will be talking about how many countries have banned Corporal Punishment all together, which includes any form of harm from parents and the school system, and try and find other ways of disciplining our children that will not harm them mentally or physically.

Don't use plagiarized sources. Get your custom essay on
“ What is Corporal Punishment? ”
Get custom paper
NEW! smart matching with writer

We will also be talking about how the band first got started and how more countries are now starting to follow suit.

Let’s start with how the Swedish parliament was the first in the world in favor of the prohibition of Corporal Punishment on March 15, 1979, and it became a law on July 1, 1979. In less than 3 months Sweden had a law on ending corporal punishment. So, just how do the Swedish discipline their children? Monika Sarajärvi, who co-ordinates the Swedish Save the Children’s European Programme says, “We maintain that you can get far with words and that the child-parent relationship should not have to regress into violence.

” Prohibiting this punishment is more about ensuring children are equally protected under the law. Our children deserve more, not less, protection from assault. Our children should not fear their parents or teachers if they have done something non-life-threatening wrong.

Corporal punishment is technically legal in all 50 of the United States, but the statues vary state to state, but one thing is the same in all of them: physical punishment must be reasonable, but not excessive.

According to Brookings.edu’s website, “In America, hitting children is more culturally acceptable than in many other nations -not only by parents but also by teachers.” I honestly believe that corporal punishment should not even be a thing. How is hitting your kid a good example? To me, all you are doing is setting them up to just do the same exact thing. You are hitting your child to get their attention and to do what you want. Something we are hitting our children for hitting others, a bit redundant isn’t it? Yet, one issue that a lot of people voice their opinion on is whether to spank or not to spank. Do you consider it discipline or abuse? Where do you draw the line? I have asked people before and most people say that the difference is whether you leave a mark or not. Once you leave a mark it is abuse. But what about verbal abuse, that leaves physical marks. Most parents that spank their children are just disciplining them the same way that they were as kids. As a kid, I was spanked from time to time and for a while did the same to my son. In the last 4 years, I see now that you can get a point across without raising a hand to a child, all you need to do is use your words. If you give a child an ultimatum they usually start acting correctly.

We all need to start looking into other ways of disciplining our children without having to ever touch them in any way. There are other alternatives to discipline such as taking away a child’s privileges. In my house, if my son acts up, we take away all electronics for a certain amount of time, which depends on the severity of the offense, to which this quickly gets his attention. We, as a country, also need to look for a much different approach to how we react to a particular behavior that we do not approve of. We need to encourage and praise our children more for what they are doing right and make sure to state that we do not love them any less. In my opinion, corporal punishment can damage a family’s relationship. A child might even associate this “punishment” as a form of violence that is an acceptable way of resolving a conflict and getting what they want (i.e. bullying).

Common findings even show that children who have been punished by way of spanking, seem to be more aggressive than other children, have more anxiety, depression, learning problems, and even troubled parent-child relationships. One study even showed that a majority of physical child abuse cases derive from incidents that involve the person disciplining who goes too far by losing control of the situation. We normalize this violence by simply calling it “spanking” or “paddling”, but in reality, it should be called “assaulting” or “beating”. According to fatherly.com, ‘53 countries have currently outlawed corporal punishment of children. Such laws were made as an effort to stop child abuse and to help promote a child’s rights of protection from humiliating and violent treatment.’ In all honesty, as adults have a right to not be assaulted by another adult, no child should be assaulted by another adult of child alike. This assault violates a child’s rights to respect for their dignity and integrity with freedom from being tortured and other cruel, inhuman, or degrading treatment or punishment. We must all learn a better way of discipline that does not involve injuring our children.

What is Corporal Punishment?. (2020, Oct 11). Retrieved from https://studymoose.com/what-is-corporal-punishment-essay 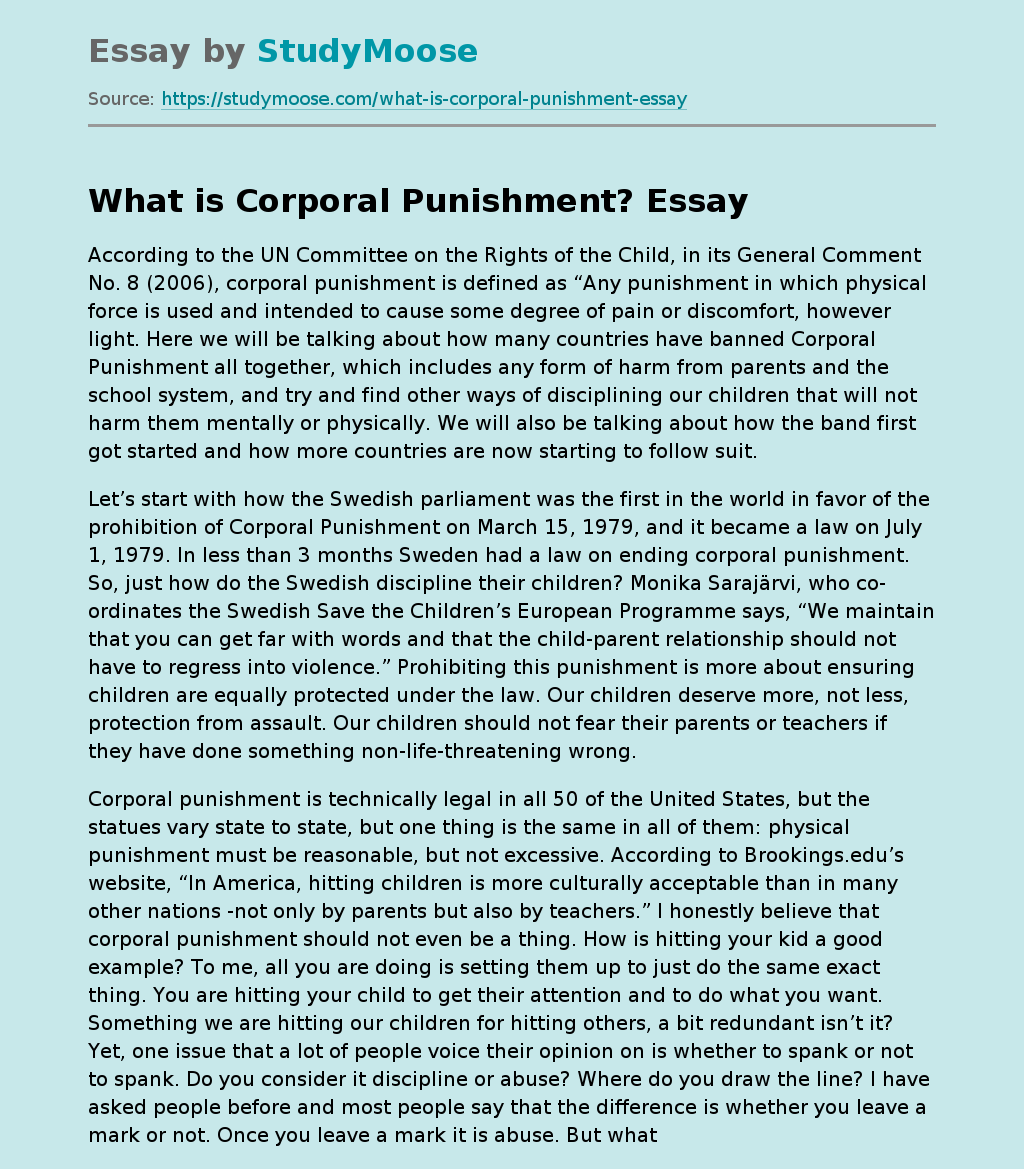