Is Corporal Punishment an Effective Means of Discipline?

Is disciplining children with corporal punishment ethical? This topic has been going on for centuries and remains a widely argued and debated issue. Corporal punishment not only carries the in-built danger of escalation, but it also impacts the child psychologically, infringes their right, and causes irreversible damages to their cognitive development. Children as society’s smallest and vulnerable members deserve more, not less protection from assault, and they should be treated equally with dignity and respect.

Corporal punishment infringes and denies the child’s right from degrading treatments of punishments.

Don't use plagiarized sources. Get your custom essay on
“ Is Corporal Punishment an Effective Means of Discipline? ”
Get custom paper
NEW! smart matching with writer

Corporal punishment infringes the right to equal protection by allowing children to be physically attacked in the name of discipline. Every child has the right to be entitled to protection from abuse, exploitation, and violence. (UNICEF, 2011). These three factors can influence the child’s transition to adulthood with adverse consequences later in life. With that, even a mild corporal punishment reflects a great invasion of rights and discrimination against children.

Corporal punishment will eventually lead to other or more severe forms of abuse as it effectiveness decreases with each usage.

Forms of corporal punishment would include hitting, kicking, spanking, pinching, forcing children to stay in uncomfortable positions, and using of different objects such as belts and sticks. The American Academy of Pediatrics (AAP, 1998) debated that “spanking will only instantly stop undesired behavior and its effectiveness will diminish with subsequent use”. To preserve the initial impact that corporal punishment has on the child, the intensity with which it was administered must be methodically increased and this may quickly escalate into abuse.

When children do not comply, parents and educators become desensitized to what they are doing and they move from light slaps to hard blows. This proves that corporal punishment is an ineffective strategy to discipline children.

Corporal punishment can result in lifelong psychological damages that are irreversible. When a child is punished physically, it installs fear rather than getting the intended message across. It sends out the message of aggression and when the children reach adulthood, this will have a significant effect on their psychological health. As a result, children might feel unloved, worthless and also useless. When this happens for an extended period of time, children may grow up believing that physical aggression is accepted in social circumstances. According to Vygotsky (1978), “corporal punishments may legitimize violence for children in interpersonal relationships because they tend to internalise the social relations they experience.” This teaches children that violence is the solution for problems. Bandura (1969) believed that physical punishment allowed children to learn aggressive behavior through modeling. Children may continue this thinking into adulthood, causing them to hit their children to inflict pain and to influence other people’s action. What adults are trying to prevent through physically punishing, they are reinforcing it unintentionally.

Admittedly some people feel that educators are using corporal punishment to discipline the children as it is an efficient traditional tool that can be administered instantly. In contrast to other forms of punishment, such as suspension from school whereby they miss lessons and their education is at stake, they can still proceed with their learning. Teachers can also avoid wasting time supervising students who have misbehaved. “Spare the rod, spoil the child”. This implies that if children’s personal development will suffer if they are not punished physically when they do wrong. This explains why some feel that corporal punishment is the proper way to discipline and shape the child.

Nonetheless, corporal punishment should not be tolerated as it is an ineffective discipline method, is dangerous, should be avoided at all expense even if it is time-efficient or serves as the best remedy for classroom problems. It robs the child of their right, leads to psychological associated problems, affects the child’s cognitive development and increases the risk of abuse. It leaves the child feeling very degraded. Therefore, corporal punishment is unacceptable. There are many non-violent ways to discipline the child. Some examples would include appropriate techniques of guiding and counseling, restorative justice where by you make the “victim” and “offender” reflect on their behavior and praise the child when they display outstanding behavior, as this will encourage them to repeat that desired behavior again. Lastly, it would be time out, where the child is told to stop whatever they are doing and told to calm down. They are then sent to a corner, still under the supervision of the teacher or the parent, and are told to reflect on their behavior. Why is that with more and more information becoming available of the harm corporal punishment brings to children both in the short and long term, some countries still practice it?

Is Corporal Punishment an Effective Means of Discipline?. (2020, Nov 11). Retrieved from http://studymoose.com/is-corporal-punishment-an-effective-means-of-discipline-essay 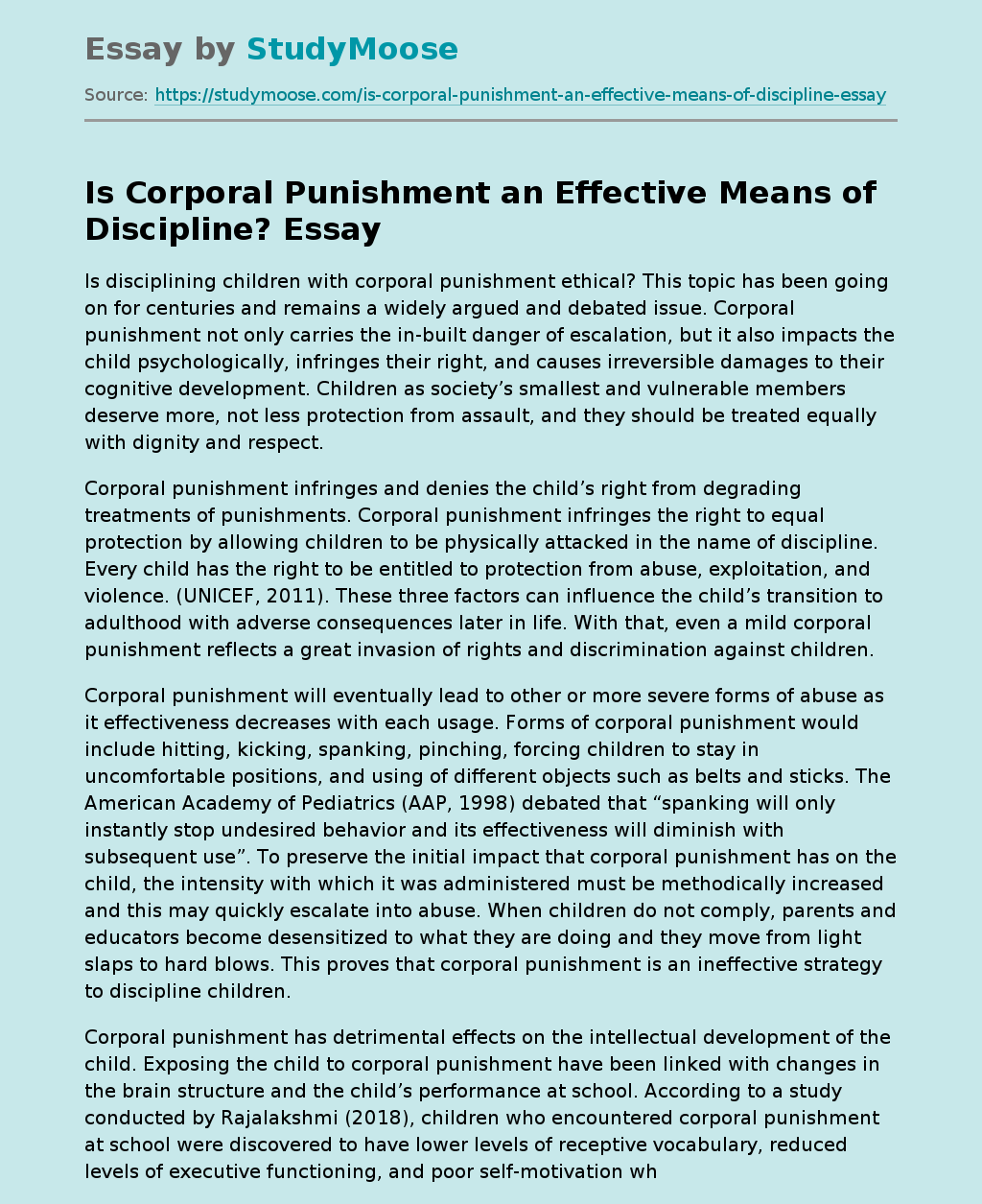