Corporal Punishment Should Be Reintroduced in Schools

Corporal Punishment as described by the Collins Dictionary and Thesaurus is “punishment of a physical nature, such as caning, flogging, or beating”. As long as students understand that corporal punishment is based on authority, not violence or Abuse, and acknowledge that the authority is being used for legitimate purposes such as; discipline, Respect, appropriate classroom behavior and maintaining high levels of learning, they can easily understand why it is something that their Principal should be allowed to perform with Parental Consent.

Don't use plagiarized sources. Get your custom essay on
“ Corporal Punishment Should Be Reintroduced in Schools ”
Get custom paper
NEW! smart matching with writer

Nowadays, students control the classroom and disregard the teacher’s orders and authority.” Authority” – the power or right to give orders, make decisions, and enforce obedience. Since students know that teachers cannot do anything more than send them out of class, teachers are left with an un-teachable classroom due to the distractions caused by “nuisances in class”. Students who are defiant or non-compliant can be the most challenging to teach. They frequently interrupt instruction, often do poorly academically, show disrespect and may show little motivation to learn.

If parents “spare the rod” at home and send an undisciplined child to school, then its fair to say it becomes the responsibility of the school to instill discipline. If the parents and the school fail the child in this regard, then the resulting undisciplined child will learn the hard way about the consequences of unacceptable behavior later in life. Corporal punishment, unlike loss of privileges, such as having your mobile phone taken away, no Facebook activity or a firm lecture about your behavior, allows the child to draw a clear line on what is not acceptable behavior.

In the UK, corporal punishment has been banned in schools for numerous years. By reintroducing corporal punishment, teachers will regain the respect and healthy order in the classroom that they should have had in the first place. It is also essential to make it clear to the student being punished the guidelines upon why they are receiving that punishment. . If criminals are punished for crimes, then students must also understand that there are
penalties for their actions.

If you look at educational statistics and reports from the past to the present, violence and delinquency in schools were 200 to 300% lower than they are now according to the CDC (Center for Disease Control), OJJDP (Office of Juvenile Justice and Delinquency Prevention) and NCES (National Center for Education Statistics). They show through extensive data children in schools during corporal punishment eras that; students performed better, focused, less instances of delinquency and Respectful. In addition, there were also fewer recorded incidents of students and teachers being accosted, assaulted, harassed and violated.

House of Commons: Corporal punishment lawful with parental consent [HISTORY] On 28 January 1997 the UK parliament debated reinstating Corporal Punishment in state school’s, ten years after it was abolished. The move failed, but the debate is quite interesting.

Corporal Punishment Should Be Reintroduced in Schools. (2016, Apr 06). Retrieved from https://studymoose.com/corporal-punishment-should-be-reintroduced-in-schools-essay 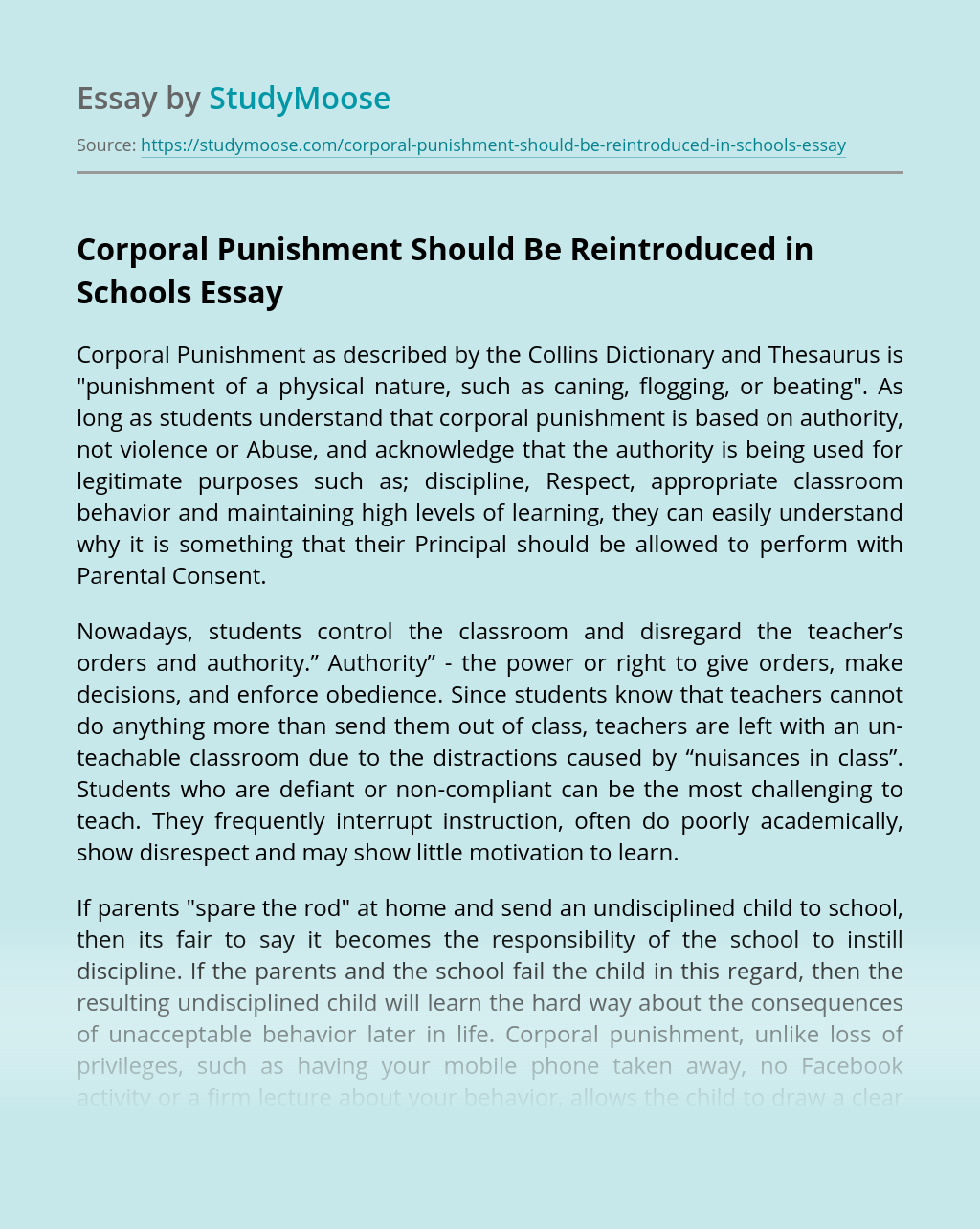