Media Censorship and the Treatment of Journalists

Media censorship is one of the most prevalent human rights infringements in the world since it is a blatant violation of freedom of information and expression. There are several reasons why governments and national authorities practice this treatment, which is mostly due to political dissident, religiously sensitive themes or sexual contents.

After the rise of social media and the Internet, people started to express their opinions on various online platforms under the freedom of speech and consequently, censorship has become a widespread issue.

Don't use plagiarized sources. Get your custom essay on
“ Media Censorship and the Treatment of Journalists ”
Get custom paper
NEW! smart matching with writer

Although it is a problem that every nation is affected by, it is the most predominant in countries in the Middle East and East Asia. Censorship in the media might be advantageous to a certain extent, for instance when it is being used to protect the privacy of a person or avoiding graphic details and images, however, it is also highly convenient to abuse. In 2017, Algerian blogger Merzoug Touati was arrested for ‘encouraging civil unrest’ only because of posting his opinion on Youtube.

In June 2013 in Turkey, there was civil unrest and the dissident protests all over the country endured massive amounts of censorship and disinformation from the mainstream media. Furthermore, access to several social media platforms was denied during the protests. Abusing the censorship to the extent of violating basic human rights can lead to situations similar to the aforementioned issues. People all over the world are being detained and punished for expressing their opinions, which conjures up another major issue: treatment of journalists.

According to the annual round-up report of Reporters Without Borders, an independent NGO that promotes and defends journalistic freedom and independence worldwide, 80 journalists were killed, 60 were held hostage and 348 were detained all over the world in 2018.

Prisoners of conscience, which are people imprisoned because of their political views and the non-violent expression of their conscientiously held beliefs, are a major problem and most of these prisoners are journalists. Journalists face kidnapping, death and wrongful imprisonment and while these threats can be documented, there are other common issues such as being intimidated, threatened and even beaten into silence. These forms of oppression are usually undocumented and often go unpunished. In line with the very same report, Afghanistan, Syria, Yemen, India, Mexico and USA are the deadliest countries for journalists whereas China, Egypt, Turkey, Iran and Saudi Arabia are the countries with the most journalists imprisoned. These situations are all clear violations of the Universal Declaration of Human Rights, specifically the third Article which states that everyone has the right to life, liberty and security of person and the eighteenth Article which affirms that everyone has the right to freedom of opinion.

UNESCO has played an important role in protecting journalists’ rights since its creation in 1945. It has a wealth of information and statistics on the safety of journalists and coordinates with prominent NGOs to further promote journalist safety. The Committee to Protect Journalists is another major party involved since it creates a yearly updated index to calculate the number of unsolved murders and unprosecuted violence against journalists worldwide. In recent years the Human Rights Council passed several resolutions concerning the issue.

Organisations tackling the issue of media censorship include The Index on Censorship, which is an organisation that publishes work by censored writers and artists and monitor threats to free speech. National Coalition Against Censorship is another organisation which aims to promote freedom of thought, inquiry and expression and oppose censorship in all its forms.

In conclusion, these two problems are creating major conflicts and immediate action should be taken in order to prevent these infringements of human rights. Working in cooperation with the existing NGOs related to the problems might be an efficient solution. Encouraging governments to revise their laws and regulations in order to eradicate these problems might also be a sustainable solution.

Media Censorship and the Treatment of Journalists. (2021, Aug 16). Retrieved from https://studymoose.com/media-censorship-and-the-treatment-of-journalists-essay 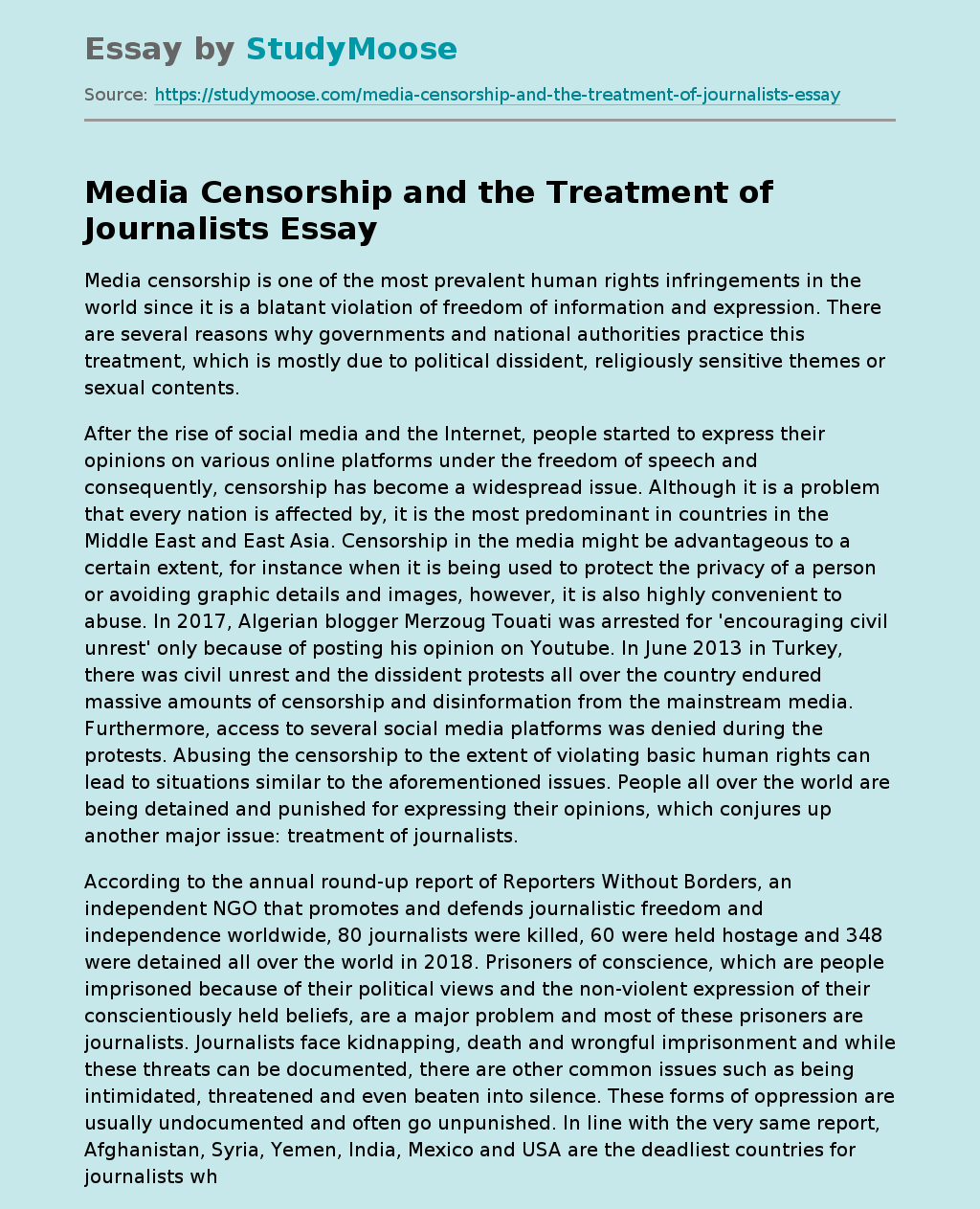