In the present scenario, after “tech savvy “ it is the “Media savvy” that has become synonymous with today’s generation. In the era of super computers and super technologies, the Media is considered as the mirror of the modern society. Undoubtedly the Media plays a spectacular role in building the mindset of the society. It provokes people to pass suitable judgments on certain issue rather than being judgmental over an issue.

The Role of the Media in Life

Media has a huge role in our lives; it influences our daily activities and also shapes our history.

Don't use plagiarized sources. Get your custom essay on
“ Role of Media ”
Get custom paper
NEW! smart matching with writer

One of the most important roles of mass media is the news and announcement broadcasting. It keeps us up to date about the latest news, trends and even the weather reports everyday. The media is a very powerful socializing agent; almost 90% of all household have TV sets in their houses a larger percent has their own radio. Media is also used for trade and advertising.

Many business groups use the television as their main advertising system. It is also used for traffic updates so that we can avoid that long and stressing line of cars.

The media is also our window to other countries and is the chief agent of globalization. Because it is very powerful, it is also the responsibility of those people working in the media to use it carefully and wisely. If the broadcasters don’t look closely at what they are airing on the TV, it could be a bad influence for children and us teenagers.

We base most of our knowledge on government news updates, not experience (unless our parents are politicians). We are dependent on the media for what we know and how we relate to the world of politics.

We read or watch political debates followed by instant analysis and commentary by “experts.” So in short, the media are our eyes to the world. Media is a very powerful change agent. What we see in the television largely influences our beliefs and in turn, this also affects our behavior and how we turn out as a person.

Some questions that we should ask are: Does TV has too much sex and violence? Are the news media biased? Have TV talk shows gone too far with their sensationalized topics? Should the content of Internet be regulated? Mass media should be aimed for the human improvement; it should be devoid of lies and untruthfulness that could affect our generation’s future.  And also as a high school student, I should be more discerning and critical on what I watch on TV or it may end up harming me.

Traditional and Digital Form of Media

As the dimensions of the Media has become broad, it would be purely injustice to deal it in just a word or a sentence. Therefore it has been described under two categories i.e. the traditional and the digital form of Media. As we all know that the traditional form of Media constitutes the oldest form of communication between the public and the world outside. Generally it includes newspapers, magazines, radio and all other means which were used previously as a communicator between the people and the World outside and which worked as the strong base in the making of the Modern Media.

Now a days, then Social Media i.e. the digital form of Media is playing a significant role in shaping the thoughts and minds of the society. It uphold as an eye- opener to the new generation on several concurrent issues. According to the new statistics report, about 2/3rd of Indians online spend time on social networking sites like Facebook, Twitter, You tubes etc. By December 2012, the number of social media users in Urban India had reached 62 million. A sudden availability of Smart phones and Mobile Internet has led to a spurt in the use of social media. These social networking sites not only provide a communication with the world widely but also invoke infinite opportunities to society people to take a proper stand on the right issues.

Social Media is not only confined to you and me but to politicians as well. The study by IRIS knowledge Foundation and supported by the Internet and Mobile Association of India (IAMAI) has indicated in its recent reports that social media adhere a huge role in influencing the general elections to a great extent. With the outstanding support of social Media, Our Honorable Prime Minister Mr. Narendra Modi has placed a distinguished image in the hearts of the Indian youth. He always make his account and timelines updated through social networking sites Twitter and Facebook.

We all have seen many of his pictures of his foreign aviations uploaded on his personal websites. A certain point to note that when the Lok Sabha elections held and the results were announced, he made a personal website of himself and his party so as to receive the good wishes of his public who voted for his party. A column is also included there where anyone can write his opinions about the development of his country and that will be directly conveyed to Our Honorable Prime Minister. This shows the reach of Social Media as it provides the best way to the Prime Minister to always get communicated to the youth of India.

The Role of Media in Business and Consumer Market

The role of Media in business and consumer market in India cannot be undermined as well. It is the change in consumer’s behavior that is changing the role of Media in India. Now the newspapers are not only an information center of current affairs but also serve as a business communicator by adding certain advertisement blogs in it. In Social Media, Facebook serve the best platform for customer’s engagement in business purposes followed by Twitter, Youtube and Blogging. The statistical report says about 95.7% of organizations in India use social Media to build communities, 76.1% for highlighting brand news, platform specific parameters such as number of likes, shares, comments, people talking about the company are considered by 81% of the organization to measure their graph of success.

The role of Media in recruitment aspects cannot be neglected at all. Nowadays the newspapers, television and the social sites have their specific employment columns where a person can find the best suited job for himself. Social Media and recruitment go hand in hand with social Media becoming an integral part of recruiting firms.

The newspapers as well as the social sites have numerous marriage bureau websites where a person can find the best suitable life partner for himself / herself. This shows that how Media has indulged in your personal decisions as well and it is contributing its best to complete your life by finding you the finest person for you and your family. Some of the sites like Shaadi.com, Jeevansathi.com, Humsafar.com are the best examples of finding you the right choice of your life. Now you don’t have to roam around door to door to find a suitable partner for you. Now your life partner is just a click away from you. Thus there is no way to ignore the prominent role of Media for entertainment, business, recruitment or any other purposes.

It is the Media which serve as a “watch dog” to the Indian society. It is the protector of our First Amendment “right to free speech”. The constitution of India has provided the right to speak up against the evils of the society. And the Media is contributing to its best. Especially with the help of social media like Facebook or Twitter or Youtube we can post an update of what we want to inform to the society.

By uploading a picture or a video on these sites we can easily inform the society about the evils and worse happening in the society or the world widely. With the graph of number of likes, share and people talking about the issue, we can have the support of the society as well. There are numerous examples of incidents when a post had been updated by someone just to inform the public and get their support on a certain issue. The newspaper headlines also work the same way.

It would be very true to say that the developing Media is the mirror of the developing society. India, our country is developing day by day, time by time and it is our duty to contribute in the development of our country. The Media is serving the best possible ways to make its outstanding contribution in its progress. Though the means are different but the motto will always be the same. Now it’s our turn. 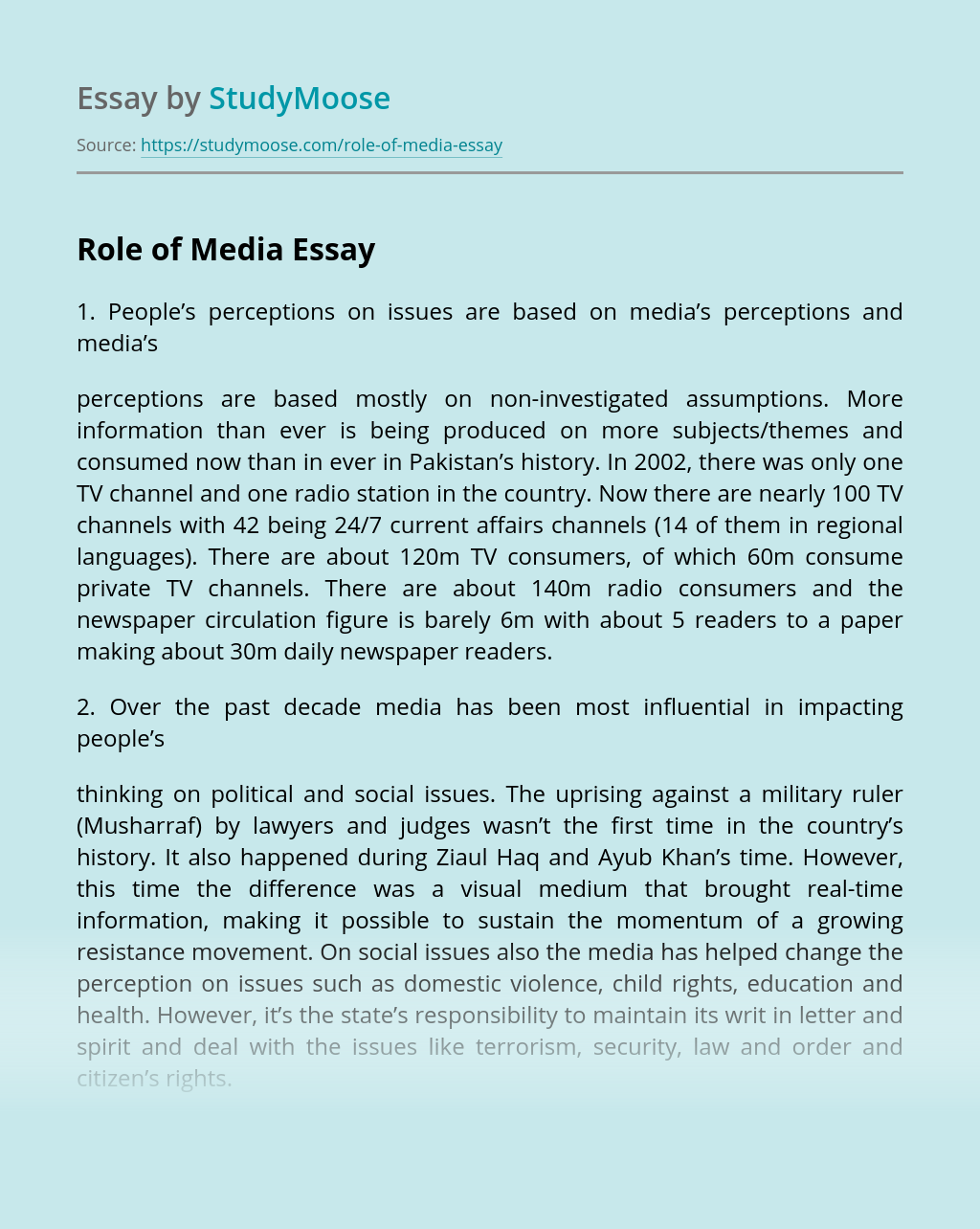