The morals we teach the youth in our generation today, decide our future for tomorrow. In the abundance of our children’s extracurricular activities, trophies, certificates, medals, or ribbons are given to them just for engaging. This is a serious matter as children who are always receiving trophies regardless of effort or achievement are taught the destructive message that “losing is so terrible that we can never let it happen.” How we react to kids’ failure is just as crucial as celebrating their success.

Don't use plagiarized sources. Get your custom essay on
“ The morals we teach the youth in our generation today decide our ”
Get custom paper
NEW! smart matching with writer

Instilling in an entire generation, that formulates our future, that “they will always be a winner” presents to them a nonsensical view of society and the mechanics of the world as they commence adulthood. A generation of this excessive trophy giving creates a generation of entitled people and will come to lose selflessness, gratefulness, and other significant attributes required to find worthwhile satisfaction. If brainwashed into viewing our world not as it is, detrimental decisions that decide our world’s future can be made.

Presenting a trophy on a whim withholds the person’s want of success, and potentially future progression, and ultimately strips them of a potential future that could have been attained from hard work.

The foremost issue from participation trophies and allowing everyone to be rewarded is depriving trophies of having value or meaning and changes the essence of sports and the culture of winning. It correlates to the economic term scarcity. If numerous children are receiving trophies, the limited resources aspect plummets which causes a decrease in its significance by sending a message that everyone has it so it’s not as distinctive.

This does not motivate the child, instead teaching them no persistence and the necessary devotion to achieve what you want. The intended positive reinforcement of a trophy is diminished, as the excessive trophy giving causes children to repeat monotonous behavior in order for equal triumph to occur again. “This changes the dynamic of sports because everybody plays to win and works hard to get that first place trophy but with this new generation of participation trophies, people may lose interest with winning a trophy because of its loss of meaning” (blogs.elon.edu). Eradicating the scarcity factor of trophies teaches children hard work is not a significant factor in succeeding. “In a New York Times article about trophies, Ashley Merryman writes “it’s through failure and mistakes that we learn the most” (blogs.elon.edu). When children are brought into adulthood and the real world with this mindset, the will have had no failure to learn from and create success where it most matters.

Some people perceive the culture of winning and the outcome of all competitions plainly about winners and losers, defining it as whether or not you win the contest and take home the trophy. This perception displays the extrinsic motivation of the person which is derived from the rewards like money, fame, grades, praise, and trophies after the competition. They exclude the individual mental and physical gain the participants received from the process of striving for what they wanted. “A study published in The National Academic Press advises that we need to praise kids on the process during the determination to reach success, not the short term results in the competitions” (nytimes.com). A common phrase to ease the discomfort or humiliation from losing is “everyone’s a winner at heart.” Alternatively then avoiding a valuable lesson of “it takes time to achieve what you want that is worthwhile” to our children from the defeat, the children should receive recognition for their individual progress. Not exclusively are the “losers” of competition in need of concern, the “winners” are too. Expressions of pride in a child’s performance are said as “You’re a winner” or “You’re a natural” can potentially affect the child’s confrontation with failure. “The educational psychologist Jere Brophy says this method of praising will probably “backfire, causing the recipients pain or embarrassment rather than making them feel good.” This is because praise on its own is not enough. The quality, context, and intention behind the praise matter, too” (daily.jstor.org). “As the work of child psychologist, Carol Dweck shows us, praising kids for their innate talents actually makes it more difficult for them to cope when they’re actually confronted with losing.” (psychologytoday.com) Kids who are praised for their effort rather than their ability tend to strive harder, enjoy activities more, and deal with failure in a more resilient way.

Displayed on the news are developing stories of just how imperfect our world is and the contrast of a utopia. In having an abundance of participation trophies to prevent the negative sensations from losing and failure, we are possessing children in a bubble from the reality of our world. Participation trophies are passed out amongst kids regardless of their endeavor or success suggests the message that losing is such a terrible thing it must be prevented at all costs. During your education you remain focused and committed to your studies and receive the grade of an A, you procrastinate and neglect the work needed to be done, you receive a failing grade. In real life, you strive obstinately in your career or job, you get employee of the month, a raise in salary, or promotion in your position, you goof off and make excuses for the lack of dedication, you get fired from your job. Sports should not be a deviation to the lack of responsibility because the parent’s role in their child’s life is to act as a role model and provide guidelines for the essential attributes to survive, and not obscure their children from the horrendous truth that you do not always get exactly what you want. So how would a parent be carrying out their responsibility in raising our future by sometimes rewarding their child for not doing the work necessary? Our youth that decides our future is being taught a poor lesson by rewarding them for their failure. The intended purpose of a trophy is to invigorate the student or child to strive, not act negligently of the work knowing, either way, they will receive one so might as well take the easy way out.

A generation of participation trophies has altered the course of the culture of winning, depriving it of significant morals that defend the youth from growing into a mindset of entitlement. You may argue that there is a time and a place to sort the weak from the strong, but it is not before they grow into their bodies and their minds and their interests. When after failure, those praised for intelligence “displayed less task persistence, less task enjoyment, more low-ability attributions, and worse task performance than children praised for effort. Praising a child’s intelligence or other skills may particularly backfire if your child has low self-esteem, a 2013 study published in the Journal of Experimental Psychology found. Praising children, especially those with low self-esteem, for their personal qualities rather than their efforts may make them feel more ashamed when they fail,” the researchers, who conducted two studies one with 357 parents and one with 313 children ages 8 to 13 concluded” (marketwatch.com). The differentiation between praising a person and praising his or her efforts may be very subtle, but those slight differences heavily affect children’s self-esteem through possibly causing shame and may inadvertently send the message “I am a bad person.” Removing participation trophies or eliminating the scarcity factor of trophies is not about humiliating the child for not having an equal amount of praise through an award. As participation trophies are basically offering an equal amount of pride for a variation in progress and achievement of the child, the child is supposed to accept the fact it takes time to achieve something worthwhile. You frequently offer extraordinary praise for ordinary attainments children will not be able to acquire thevvalue in the attention to what you strive on and will potentially become addicted to outside validation for accomplishing even the most basic tasks.

The morals taught to our youth in the most crucial stages of their development are what is built on to create better minds for a better future than our present. Through excessive trophy giving, we will have built an entire generation in a bubble of entitlement and a lack of a realistic, honest view of the world. When they are brought out into society, they would have a lack of significant comprehension and proficiency derived from failure. More people should necessitate the elimination of unnecessary praise from children. In a study conducted by the Ohio State University, the results suggested that “constant praise for our kids’ tiniest accomplishments, may have the unintended side-effect of creating an over-inflated ego. And this can have serious consequences both in childhood and later on in life.” Granted some praise is beneficial to younger children to act as a positive reinforcement although it is more common that people are overpraising kids for doing nothing. Constructive criticism is a profitable method that communicates to kids what they are doing wrong in a professional and effective manner, neither humiliating the child nor giving excessive praise through a trophy. Children need to understand that criticism and failure provides essential knowledge for acquiring success and growth in their field of work. If constructive criticism was used more often, the meaning of sports could be revived and go back to its original roots so that we could build a culture of winning again.

The morals we teach the youth in our generation today decide our. (2019, Dec 14). Retrieved from https://studymoose.com/the-morals-we-teach-the-youth-in-our-generation-today-decide-our-example-essay 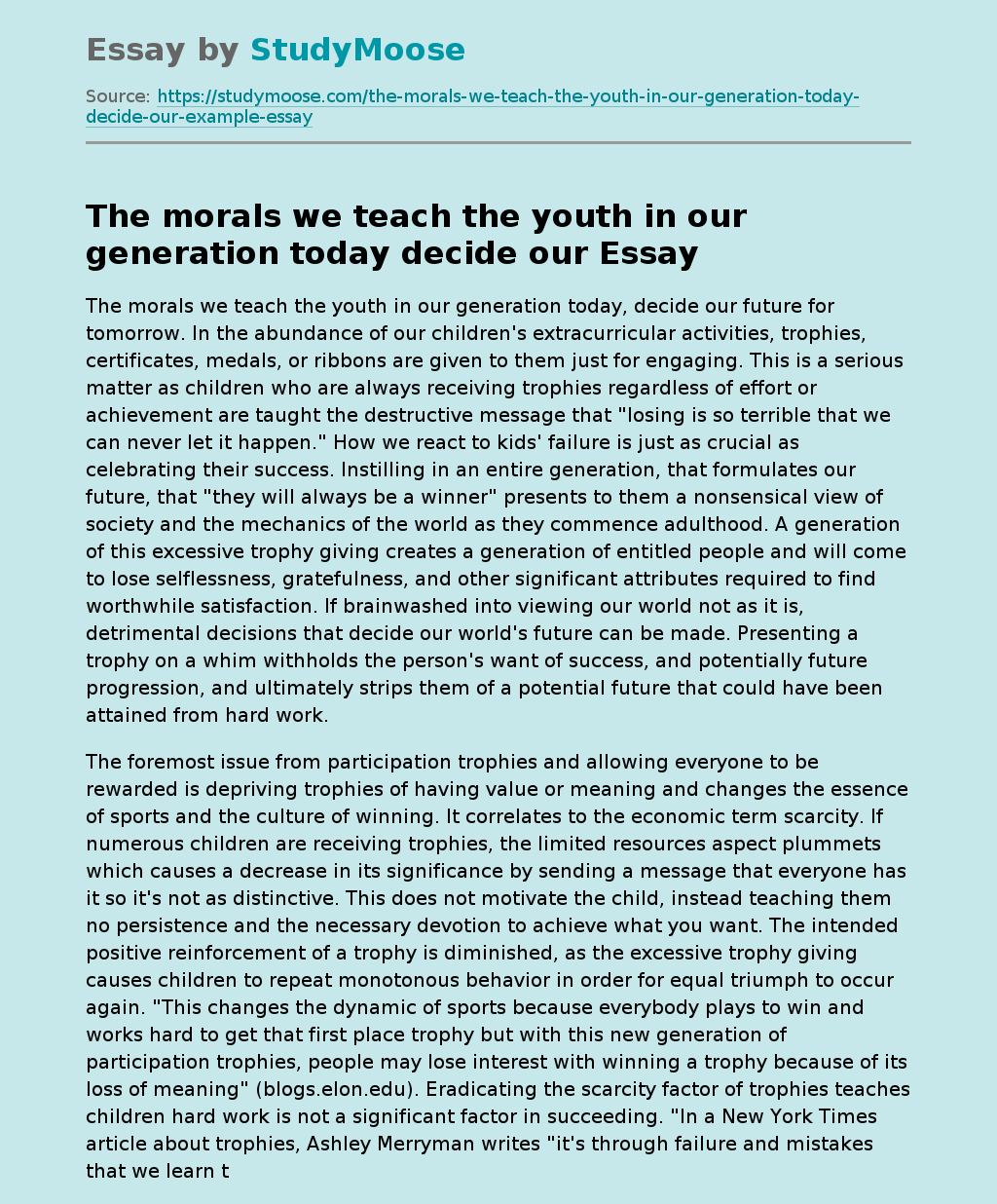