Should We Teach Patriotism in Schools

Philosophic education is non-debatable. There is no difference between Christian and Muslim physics or upper and lower class biology (Galston, 1998, p. 470). However, civic education and its purpose served will always be debated. Civic education is about the formation of individuals who can effectively conduct their livers within their political community. Civic education in a liberal democracy will differ from a civic education in a communist regime (Galston, 1998, p. 471). In our liberal democracy there is a lingering controversial educational topic. Should we teach patriotic history and teach patriotism in our schools? Politicians, professors of higher education, parents, students, and citizens should all have a vested interest in these two issues.

Don't use plagiarized sources.
Get Your Custom Essay on Should We Teach Patriotism in Schools Just from $13,9/Page

Intelligent people can have rational view points for each reason. Nothing is pure in what is being taught in our civic education classes. There are many external forces that will shape our history lessons.

The state board of education will decide on what is being taught in an 8th grade history class.

The state board of education is influence by many stakeholders. However, often times it is the states with larger populations that will determine what textbooks the smaller border states will use for their history curriculum. States with large populations, such as Texas and California, determine what facts and stories they want to teach in their classes. The smaller states that border on the Texas line will be taught the conservative natured history lessons that middle school students in Texas will learn America is a melting pot with many different races, religions, and political views. Our history lessons are continuously challenged by different viewpoints. The majority will generally be satisfied with certain points taught or left out in history lessons; however the minority will often be opposed. It will be difficult to achieve neutrality and balance to all groups when teaching patriotic history. (Fullinwider, 1996, p. 206) The argument goes back to the principle, if we don’t always know the truth, what does it matter.

However, isn’t it possible that if we don’t go after the quest for historical accuracy we endangering a skewed and biased version of history? Fullinwider believes we have a lot of available history and there are lots of concerns that come into play. Not all concerns are compatible for truths. There is a different history to be taught to help our students become patriotic citizens. He acknowledges the need for historian scholars and their quest for “Wart end all” history, a history that is written purely in the interest of the ugly truth. Fullinwider feels that the historian scholars have a role to uncover and teach on racism, xenophobia, and violence of a nation’s past. (Fullinwider, 1996, p. 207-208) However, Fullinwider would like to go a little easy on some of these episodes. If we want a proud history don’t burden our young students with these episodes.

He feels the historian educator has an obligation to inspire young students. Fullinwider feels they must be careful with details. (Fullinwider, 1996, p. 209) “Students need a usable past.. a past in which they can find values and projects to take as their own legacies. As heirs, they define their own lives around goals and commitments that build on what came before.”(Fullinwider, 1996, p. 222) Thomas Jefferson was a major political participant in the constitution and is easily recognized as a leading figure in enlightenment, freedom and inequality. However, Jefferson was a slave owner. If we focus on the negative aspects of Jefferson hypocrisies then we fail as educators to inspire children on key American democracy ideals of freedom and inequality. Martin Luther King, is a national figure and a key leader in the American civil rights movement. However, he plagiarized his doctoral thesis and had numerous infidelities. Fullinwider believes it is not important to teach upon the negatives of Martin Luther King. In an 8th grade text books need to leave certain things out.

There are developmental considerations when teaching history is the age and the emotional maturity of the students. (Fullinwider, p. 218) Yes, the 8th grade teacher will have to discuss American history figures that are controversial. However, the in depth lectures on the figures will be better served if discussed in higher education. The higher education students are more mature and can handle ambiguity. I feel Martin Luther King Jr.’s infidelities and plagiarism are not the vocal point of American civil rights history. King Jr.’s leadership and equality speeches changed the course of American history. Our young 8th grade students associate great people with great things and at this point in there stage of child development (Fullinwider, 1996, p. 218). By exposing our 8th grade students to the plagiarism and infidelities of a person with a National holiday it would fill their heads and moral compasses with ambiguity. Also, an important lesson of taking a stand for what you believe in and the lesson of leadership could potentially be devalued by discussing the negatives of his personal life.

Brighouse’s had many intelligent objections to teaching patriotism in schools. Brighouse believed by teaching patriotism xenophobia and racism could occur. He believed indoctrination could cause patriots to ignore their obligations to interest of foreigners (Brighouse, 2006, p.100). Brighouse had a valid point; if we are too focused on our fellow patriots then we could ignore unjust and catastrophic events in other parts of the world. With the rise of globalism, I agree it is imperative for the citizens of the United States to care for the citizens around the world. Everything in this world is interconnected and we all depend on each other for a flourishing life. However, in America we teach a patriotic history and in 2011 the U.S was the most charitable nation in the world. There are poor citizens in the United States that need more charity; however $212 billion charity dollars did not stay in the United States (Goldberg, 2011). A part of American patriotism is to help nations in distress or on the brink of national disaster. It is not just the aid of money; it is American troops and resources sent to help citizens of other countries when a dictator is out of line or when a tsunami hits. Are the intentions of Americans pure? This is certainly debatable.

However, the economic value of the aid sent is not debatable. When teaching American history there are many lessons that involve helping foreigners and this is a patriotic ideal ingrained in many student’s brains. Brighouse has a valid point; patriotism is sometime used to stifle free discussion and debate in a nation. He feels this is very problematic when dealing with an external threat (Brighouse, 2006, p.106). Brighouse believes if patriotism is manufactured in schools then citizens will blindly follow their country, potentially into the ground. Certain manufacturing of patriotism in a nation such as North Korea would indeed stifle discussion and debate. In America we have the pledge of allegiance, which can be viewed as a manufactured form of patriotism, however the pledge for many promotes patriotism to the democratic ideals this nation is founded upon. In liberal democracies patriotism comes in the form of having the freedom to choose government officials and change unjust. Teaching American patriotism reveals the right to change the government through voting and movements.

Voting, religious freedom, and the right to follow one’s pursuits and passions are examples of American patriotism. Labor rights, Civil Rights Movement, and Women Rights Movement, are all examples of patriotic history challenging the government for the betterment of people. Brighouse believes patriotism is just one of many sources of identity and it is not necessary for individual flourishing. (Brighouse, 2006, p. 107) Brighouse may be correct in believing patriotism is a lot like having passion for playing the guitar, if the guitar goes away, people would find a new passion such as golf or quilt knitting. If the patriotic passion for American is gone, a person may develop a passion for their work organization or family heritage. However, I feel American patriotism for individual flourishing maybe taken for granted.

The American ideal gives us a sense that we have elite opportunities and we must work hard to make our country and world a better place. American patriotism promotes equality, freedom of religion, liberty, and happiness. Even though America falls short on creating a utopian society, these patriotic ideals have allowed many people to flourish. There are many strong pros and cons to teach patriotic history to in our educational system. I feel we need to continue to teach patriotic history in our school system.

Our youth needs to develop a sense of what the American ideal stands for by learning of historical events and people. A patriotic civic education is one of the few ways our educational system can incorporate cultural values and moral lessons. It is difficult to learn the value of equality during an algebra lesson as well as learn the value of liberty in a biology lecture. As our students advance in their cognitive thinking ability, civic education courses need to expose more truth and have less emphasis on moral stories and shaping. Our liberal democracy in America has a flawed past. However, as time progresses our country has strived to uphold and improve the values it was founded upon. The stories and characters of American history promote the values of individual flourishing.

Should We Teach Patriotism in Schools. (2017, Jan 28). Retrieved from https://studymoose.com/should-we-teach-patriotism-in-schools-essay 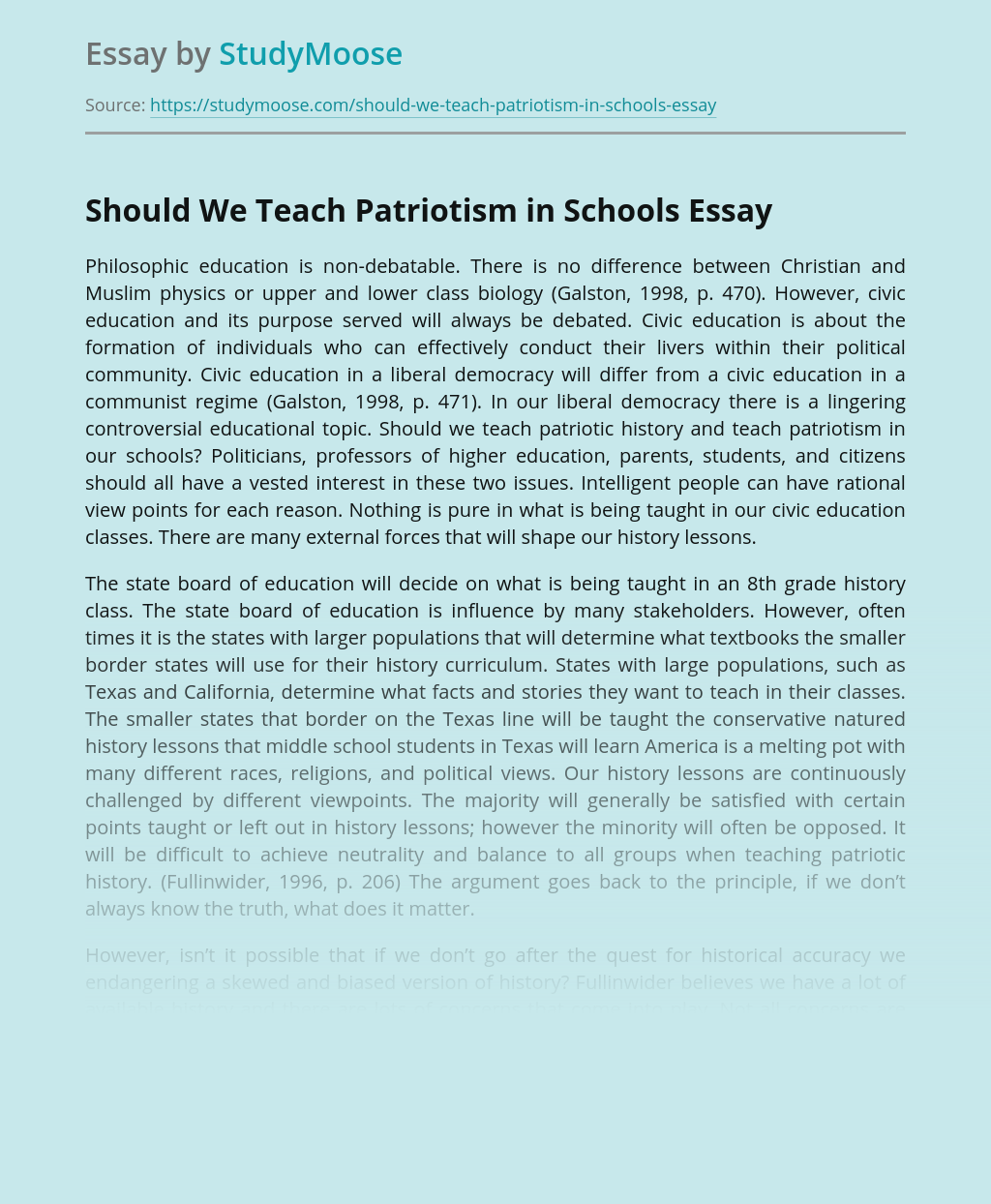 A study of Shakespeare’s play “Hamlet”, which explores the main character’s spiritual high power ” Hamlet Throughout Shakespeare’s Hamlet, it seems that a higher spiritual power is influencing the events taking place in the state of Denmark. A ghost of the recently deceased King Hamlet appears to Young Hamlet telling him of his “most foul...

Analysis of the Marks of an Educated Person

In an analysis of “The Marks of an Educated Person” the author writes about three different individuals and shows whether or not they qualify as educated people. He also writes about the purpose of education and what it means to be an educated Christian. The author refers to three individuals in his writing: Mary, Tom,...

Get Essay
Why Books Are Better Than Ebooks

The topic that I have chosen is the debate that Books are better that eBooks, Kindles and iProducts to read off. I would like to say that I don’t think that eBooks aren’t a bad thing and that should be banned, but that they aren’t the best way of reading. I believe that reading an...

Causes and Prevention of Poor Health

In lots of nations, especially the United States, behaviors leading to bad health start early in life. The three “leading causes of avoidable death in the United States are cigarette smoking, weight problems, and alcohol abuse” (Science Daily, 2006). In addition to these problems, “a lack of workout, drug abuse, and sexually transmitted illness were...