Patriotism in the Military

As a former president once said ” And so, my fellow Americans ask not what your country can do for you – ask what you can do for your country”. Patriotism is found in every country, but it’s the occupants of that country that have patriotism towards their own. This loyalty is seen in both “How to Tell a True War Story” and “Soldiers Home”. Patriotism to me is one’s natural right to show pride in being an American. Patriotism exists on different levels when taking into consideration people’s perspective on war.

In comparing these two short stories the similarities were evident and stuck out like a sore thumb. The first similarity that I had encountered was that both stories gave the impression that previous to war the main characters had an enormous sense of patriotism. This is why they went to join the military. They wanted to fight for their country, and if they were willing to die for it Krebs, the main character in “Soldiers Home”, had a nationalistic view before the World War I, and he believed that Americans should fight to save the freedoms of the United States.

In “How to Tell a True War Story” the main character is portrayed as a person who had a lot of loyalty to America prior the Vietnam War because he has the emotion of a true patriot. Another similarity between these two stories is that the main characters were changed by the sight and horrific events of war.

For example, Krebs could not even pray with his mother at the end of the story because he has lost faith in God. These events, such as, watching someone get their head blown off, or catching sight of one of your friends lungs turn into liquid because of mustard gas, changed their perception of war. This would definitely change my view of patriotism for one’s country.

This seemed to upset Ratty, the character who wrote the letter, because he put his heart and soul into it and got no response from his sister. The mention of the letter and why it got no reply could only mean that the sister didn’t want to hear the truth about how her brother died. She doesn’t want to hear her brother was playing catch with smoke grenades and died stepping on a mine. She wants to hear how he died in battle honorably. This is why when on receipt of the letter she read it and put it away never to look at it again. Now, in “Soldiers Home” Krebs still seems to have his patriotism.

One example of this is the picture he carries along with him of him, a fellow soldier, and a German girl. This little picture that he carries around with him shows that his pride is still intact and will never cease. This sense of patriotism will last in Krebs for eternity, but in a sad way his life will never be the same. In addition, when Krebs came home from World War I, two years after it had ended, there was no celebration, no welcome home, and most of all no patriotism in any Americans. For example, a recent event that occurred almost two years ago shows that patriotism does subside after time moves on. The event that I am talking about is the September 11th terrorist attack on the World Trade Center.

The point I am trying to make is that a month after it happened I saw every house waving an American flag, cars with flags on them, a real sense of patriotism swept across a nation. However, now, a year and a half later I see fewer and fewer flags and patriotic symbolism. It is so strange how a nation in not more than two years, forgets their patriotism. This is why Krebs is upset at the nation he fought for and received no hero’s welcome. People were just overwhelmed by hearing stories about the war because they have heard enough from every other soldier. The main difference I draw from these examples is the loss of patriotism by soldiers and the American public.

In conclusion, both soldiers came home with a different sense of patriotism because of their levels of experience, and the American public has a different sense of patriotism due to their relative factors. Patriotism, is it worth having? This is a question that must be answered by each individual American. Judge your patriotism with the soldier’s perspective, and what they see in combat everyday. A quote by Wilfred Owen sums up patriotism in a nut shell “Dulce et decorum est pr patria mori”, which means “Is it sweet and fitting to die for one’s country?

Patriotism in the Military. (2016, Jun 21). Retrieved from https://studymoose.com/patriotism-in-the-military-essay 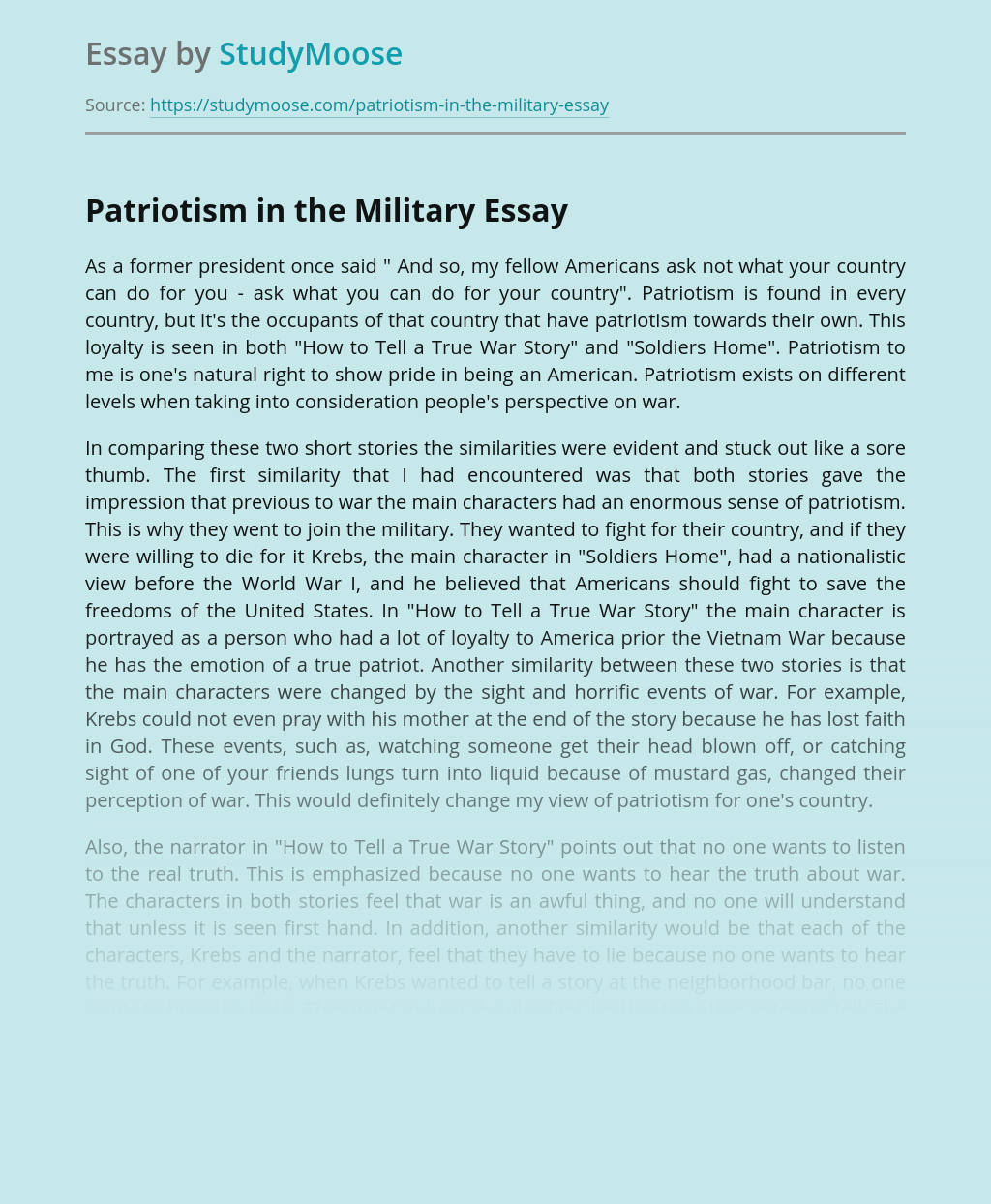 In the short story called SOLDIER’S HOME, by Nobel Prize winning author Ernest Hemingway, the main character Krebs has just returned from World War One in Europe. This is the perennial story of the hero leaving on some quest, only to return home finding everything different. Therefore, identity conflict holds the key to this story....

The very first narrative under factor to consider is “Iron Child” by Mo Yan. The piece of literature handle industrialization of China, which focused on establishing the socialist model of political system of this country in the start of the second half of the twentieth century. The results of the political transformation of China, particularly,...

Get Essay
A Soldier’s Home

One of the most famous short stories that deals with the complexities of war is the historical narrative of Ernest Hemingway entitled “A Soldier’s Home. ” The story tells about the story of Krebs, who came back into his home in the state of Oklahoma two years after the war ended. In this case, the...

The Lottery by Shirley Jackson And The destructors by Graham Greene

According to the American Heritage Dictionary, patriotism can be defined as :love and devotion to one’s country”. This seems a broad enough definition for a word that is often used by people, but seldom closely examined. One person’s practice of patriotism might be regarded as treason by another and visa-versa. In modern day America it...

Introduction     The Things They Carried by Tim O’Brien is a hybrid text of the personal experiences and the intense imagination of the author. The title is a direct reference to the the stealthy travel of the Vietnamese soldiers which carried a rifle and rice during the Vietnam War. This contrasts strikingly with the tools,...

"On The Rainy River" Analysis