Competitive Sport teach us about life

Competitive Sport an activity involving physical exertion and skill in which an individual or team competes against another or others for entertainment and victory. As the report of the World Sports Encyclopedia (2003) indicated that there are around 8000 kinds of sport in the whole world. By this, football, basketball, baseball, and volleyball are good examples for expressing more understanding on competitive sport. In each sports, even though leading to play not only by different ways or structures but also by different rules, its purpose of teaching about life to people is similar to one another.

Don't use plagiarized sources. Get your custom essay on
“ Competitive Sport teach us about life ”
Get custom paper
NEW! smart matching with writer

Moreover, all of the results from sport can influence people in many ways such as physical, mental and emotional. However, exactly all these results contain its own not only advantage but disadvantage as well. Learning to work as team, Learning to handle with the failure, and …….. is the main point that people should be consider on carefully.

As the same thing, some noticeable disadvantages which strongly against with competitive sport are getting injury, wasting too much time, and gambling illegally.

Proficient in: Importance Of Sports In Life

In sport, teamwork is an important part that requires collaborative effort on the part of a group of people who acting as a team to achieve the same goal, and emerge as a champion. As a team, teamwork isn’t an easy thing that you can do it alone. Obstacles as conflict among the teammates or unequal can affect the team’s performance. Teammates need to connect with each other well to give a good performance. As the observation from 40 university students of Dr.

Nick Holt, a professor of Faculty of Physical Education and Recreation at the University of Alberta, showed that we can target three life skills such as confidence, leadership, and teamwork from sport. Moreover, teamwork itself reinforced the idea that sport can provide an educational context for acquiring life skills and highlighted interactions with key social agents are crucial components of how people learn life skills through their involvement in sport.

In group, however, sometimes there will have one person who acts individuals to create a good performance alone while other may be passively committed. If it has to be a real competition, the person who is passively committed can make a group not in a high level of competition, also in the circumstance that the group in running behind of the score can cause the team lose the opportunity to win the game. Under the situation like these, people who are actively committed might try to think the best strategy to compete with the opposite team while those who are passively committed may be giving up already. So, to give a good performance during the competition, teamwork is really important and people who can lead the ream well would be learnt that the success of the individual isn’t important as that of the team. Teamwork can teach them humility and selflessness, also will teach them to work with each other well if want to achieve a common goal. Sports are often used as a metaphor for life. It means that in sport you have to train and work hard to success, so do for life. In short, if you want to achieve something, you have to work your butt-off to get that thing just like you want to win the competition in sport.

The harder you work the more you will be rewarded. Competitive sports teach us how to get success in life by using your failure. As we can see in competitive sports, there are winners and losers. In some case, you win the games; you celebrate well-deserved wins with your teammates happily. However, in some cases you lose; you might get upset and frustrated or sometime you happen to dread every competition and you start to fear your opponent as well. Basically, Failure is absolutely necessary for success. It’s like that hot and cold type of thing; one would never know exactly what hot is without cold. So the first thing you should do is to accept the gift of failure with a positive way because those failures are a reality of life and it can be your experience to help you grow more powerful. The more experience you get, the more you want to challenge with your opponent. Most successful people will tell you, the moments that affected them the most, the ones that they will never forgot, were the ones where they failed because in those moments you realize exactly what you are made of.

According to National Basketball Association, Micheal Jorden, a greatest basketball player, is a successful player who never let his failure stop him from playing the game he likes the most. The reason why he becomes a successful player is that he always embraces setbacks and failures as fuel and motivation. In high school, he was cut from the team as sophomore but he didn’t get upset or frustrated at all, yet he used that as fuel and trained intensely. He became a popular player in his team as the result. The quote he made is “I’ve missed more than 9000 shots in my career. I’ve lost almost 300 games. 26 times, I’ve been trusted to take the game winning shot and missed. I’ve failed over and over and over again in my life. And that is why I succeed.” The same is true in life; we’ll need to use these failures to help you refocus your energy on how to win those competitions next time. Although having taught many considerable lessons to one’s life, sport has several disadvantages influencing one’s life as well. In this case, there is a question that “why don’t adult people like their kids to play football?”.

First of all, Physical Injury is the main problem they have realized so far. According to the statistic from the National SAFE KIDS Campaign and the American Academy of Pediatrics in the United State of America indicated that there are about 30 million children and teenagers participate in any sports, and more than 3.5 million of them injuries each year. By far, the most common injuries are sprains and strains. Moreover most of the injuries occurred as a result of falls, being struck by an object, collisions, and overexertion during unorganized or informal sports activities. Unfortunately, if the injury was serious, it can be influenced to one’s future because of this physical injury. For example, one of my friends likes to play football so much, but one day he got an accident with his leg.

After having checked on his leg for two months, the doctor said that that leg couldn’t cure forever and my friend cannot do any activities with his leg anymore even walking. Secondly, wasting too much time with sport is the noticeable point to consider as well. By football, it will keep the kids from other activities such as social gatherings, communication activities and many others. Furthermore, for students, it will keep them away from learning activities such as reading book, doing homework, and researching. Finally, illegal gambling in sport is also the one of serious concerns such as gambling in football.

During the FIFA WORLD CUP fever, we saw many illegal gambling in football has increased rapidly in Cambodia. As reported by The Cambodia Daily Newspaper published on June, 18th 2014 showed that many illegal World Cup betting centers are took place at the crowded café and give out the betting slip. For this result, many teenagers can know how to bet the football match well, so they will try it because of money. Instead, if they lose the gambling, they will find more money to try it again and again that why it can cause many crimes because of their illegal activities. Depending on the Newspaper above added that many kinds of crimes have increased since there has been the betting on FIFA World Cup 2014. Moreover, not only do the losers commit the crime in the society but they also steal their parents’ money or selling something such motor, laptop and mobile phone for betting the match again. In short, sport have also taught several negative effects to one’s life following by getting injury, wasting time, and gambling illegally.

In conclusion, Competitive Sport provides us many useful lessons of life though its own advantage and disadvantage. Instead, to avoid disadvantage of that, before performing that sport, you have to realize deeply and carefully that it will cause the problem for you or not. Although competitive sport has amount of disadvantage which we need to consider, I strongly convince that competitive sport should be performed by every people, especially for the kids and teenagers, because of its most valuable advantage. To support this, I can say that if you yourself play competitive sport, you will taste the way to be a valuable person through learning the necessary advantage of connection between life and sport. So that, there is a quote which say that “The more sport you play, the more lesson you get”.

Competitive Sport teach us about life. (2016, May 09). Retrieved from https://studymoose.com/competitive-sport-teach-us-about-life-essay 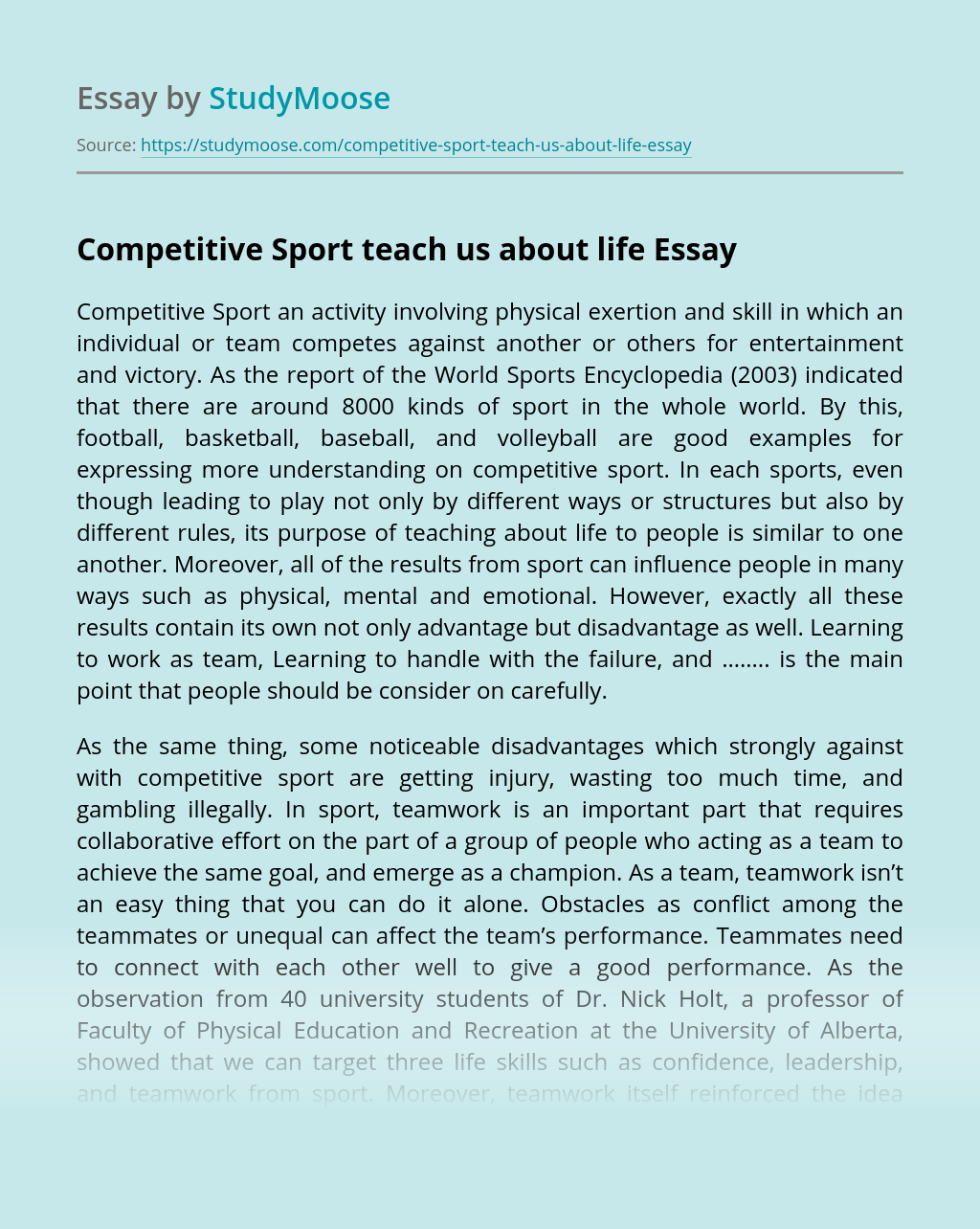