Euthanasia: The right to decide

The decision to live or die in the context of euthanasia is extremely delicate, complex and controversial. Debates about the ethics of euthanasia and physician-assisted suicide were present even in Ancient Greece and Rome. The word euthanasia itself has a Greek etymology meaning “an easy or happy death,” (from eu- “good” + thanatos “death” meaning good death) (definition taken from Online Etymology Dictionary). Euthanasia is the act of deliberately inflicting death on a person suffering from an incurable disease by making use of lethal drugs or by withholding treatment.

Don't use plagiarized sources. Get your custom essay on
“ Euthanasia: The right to decide ”
Get custom paper
NEW! smart matching with writer

There is debate over the issues of voluntary and involuntary euthanasia, or, in Daniel Callahan’s words over “killing and allowing to die”. Active euthanasia was said to result from the desire of the patient who wants to preserve his dignity. Involuntary euthanasia points to the fact that death is provoked without the patient’s consent. Either of the alternatives stated above are, more or less, a form of killing. Daniel Callahan’s work, “Killing and Allowing to Die” suggests a distinction to be made between killing and allowing to die.

The distinction is drawn in terms of omission and commission: commission is the cause of the death while omission is not, and “it confuses reality and moral judgment to see and omitted action as having the same causal status as one that kills”. (taken from Callahan D. , When Self-Determination Runs Amok). He also argues that a lethal injection will kill both a healthy and a non healthy individual but stopping a machine or terminating treatment will only kill someone who is being kept alive by means of it.

It has been argued, therefore, that active and voluntary euthanasia is when a person explicitly requests help to die and a lethal injection, for example, is given. Involuntary euthanasia, on the other hand, is triggered by actions or omissions directed toward those who themselves are incapable of making a request to die (infants, young children, the mentally retarded, or the comatose for instance) but whose relatives or physician make the request. Therefore, it appears to be of major importance such concepts like causality and culpability and beneficence and nonmaleficence.

About causality and culpability, Callahan argued: “Causality (by which I mean the direct physical causes of death) and culpability (by which I mean our attribution of moral responsibility to human actions) are confused under these circumstances” (taken from Callahan D. , retrieved from site http://www. tru. ca/ae/php/phil/mclaughl/students/phil433/callaha1. htm). The principles of beneficence and nonmaleficence basically mean to help and to do no harm and are an important part of medical ethics.

Callahan argues that medicine has taken over too great a responsibility as it is in the position to decide when medical alternative has been tried and proved ineffective; therefore, medicine arrogates the role of decision maker for when it is best to end a life. Callahan questions in his works the moral grounding of medicine, under the incidence of great technological development. Medical status seem to exacerbate several of it’s ethic principles – beneficence, nonmaleficence, autonomy, questioning the metaphysical perspective o life.

In Callahan’s words we live in an age “that cannot accept human finitude or mortality”, and moral principles, the value of human being and the possibilities of an afterlife are being totally neglected and manipulated. In such circumstances how someone (a relative or a physician) may be able to judge whether a person has a right to live or the right to die? Starting from the assumption that every person has a right to live this also implies that the person has the moral right to decide for oneself when his life should end.

The relatives and / or the physicians are therefore under the moral obligation to help the person achieve the desired ends. Concerning the ‘right to die’ as defined in Oregon suggests that a patient must have a chronic illness, with no hope of recovery within six months. The patient must provide two written statements and one spoken to the attending physician. The physician has permission under the law to proceed with the patient’s wish to provide a deadly cocktail of prescription drugs. This law only came into being after the most famous case of Karen Ann Quinlan.

Ultimately the Supreme Court agreed that Ms. Quinlan’s respirator could be removed. Ms. Quinlan’s case opened the way for ‘living wills,’ while also opening the subject of dying to the public. (related in Caldwell and Leif, 2004). The moral perspective on euthanasia may be interpreted in utilitarian terms. Utilitarians interpret the rightness or wrongness of an action based on its consequences alone. Utilitarianism is based on the principle that we ought to do the greatest good for the greatest number of persons involved (the person requesting euthanasia, dependents, elatives, health care providers, or society). The focus of the discourse will be on the patient’s part in his choice of life or death. On one hand, in the light of what has been discussed above, there are cases when death is considered by the patient to be a greater good as it induces relief of one’s suffering. Euthanasia is favored in detriment of a life enmeshed in incurable and fatal physical suffering. Richard Gula (1991) thinks that it is more difficult from a moral standpoint to justify letting somebody die a slow and hard death, dehumanized, than it is to justify helping him to escape from such misery.

According to Daniel C. Maguire (cited by Gula, R. ) however, physical life is not the greatest or absolute value and death is not the absolute evil. There are other values that transcend physical life, such as personal integrity, human dignity, and the freedom to determine the direction of one’s life according to one’s convictions. Therefore, the persons in cause have the right to decide for themselves when their life should end. Such values as those mentioned above may justify or not euthanasia.

One way in which they favor euthanasia is when they are put above physical life. Therefore a person may consider that after personality is extinguished, there is no reason to preserve biological life, since integrity, human dignity and freedom require and suggest the “right to die”. Such choice provides a certain relief from prolonged pain to the family as well and lead to the reallocation of medical resources. It has been illustrated above that the right to die or live can be argued from a utilitarian perspective as well.

The person is in the position to decide for oneself, and when this is the case the values of the person mediate the moral decision, in terms of how physical life is perceived as confronted with more transcendental values. The person should decide for oneself what are the advantages of dying or living. Another issue from a Utilitarian perspective has been put forth by Daniel Callahan (cited by Gula, 1991) who opposed euthanasia considered as bearing a risk of corruption. He suggested that the legal sanctioning of euthanasia represents a threat to our moral imagination.

One of the dangers identified by Callahan is that the value of life would become inversely proportional to its being a burden on society. The perception on the life of the elderly, the sick, and the dying will be mediated by the relief or the good consequences related to their relatives and society. Permitting euthanasia would mean for instance that human life is meaningless when is accompanied by pain and suffering should not be endured. Therefore, taking into consideration the person’s will and right to decide and one’s values is extremely important when establishing the morality of euthanasia.

Considering the legal system the 14th Amendment of the Constitution itself provides for the right of citizens to life, as well as providing equal protection from the law. The Constitution does not provide citizens with the clear right to die. The 14th Amendment in part states: “… nor shall any State deprive any person of life, liberty, or property, without due process of law; nor deny to any person within its jurisdiction the equal protection of the laws. ” The law offers more arguments against euthanasia by reinforcing the right to life, choice and protection. Related to physicians, such laws restrict their decision making process.

However, as highlighted above, medical ethics is based on beneficence and nonmaleficence and therefore the physicians have the moral obligation to preserve life with all costs. Added to this, as the law stands today the physician may not make the decision to remove the patient from life support without a ‘living will’ or guidance from the court. Such a measure performed by the physician would result in homicide charges. Nevertheless, statistics made over the last 20 years have shown a substantial increase in the number of Americans who agree that doctors should be allowed by law to end a patient’s life (Drane, J. , 1995).

Nowadays a majority as high as 70 percent, favors voluntary active euthanasia and physician assisted suicide. The personnel in health settings confirm the growing number of requests for one or the other form of technologically produced dying. Such trend raises all sorts of ethical questions. However, the important thing in this matter refers to the beliefs and values of the person subjected to euthanasia. Neither the court, nor the doctors are not in the position to lead the discussion in a moral dilemma regarding euthanasia. Both parts, however, took an oath to respect the right to life and agreed to offer protection.

The blurring borders of their oaths and the transparency of discourse are not the subject of this paper. What remains as a core issue in this debate is the persons values towards life and death and the suggestion to estimate the benefits (from a utilitarian perspective) in terms of what the patient desires, how does he envisage life and / or death.

Euthanasia: The right to decide. (2021, Jun 02). Retrieved from https://studymoose.com/euthanasia-right-decide-new-essay 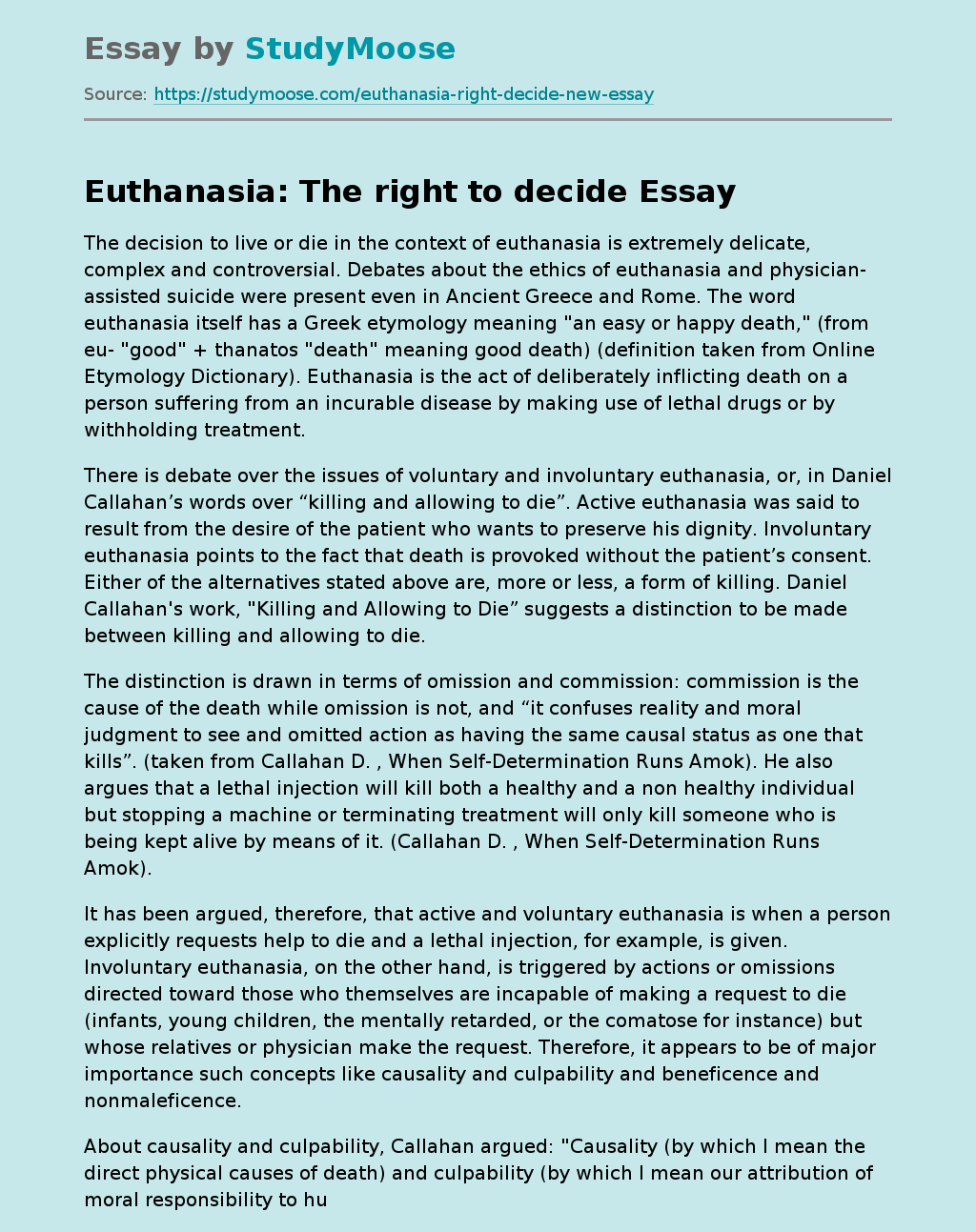