According to research, women journalists battle both for jobs and to be taken seriously. How (if at all) has this picture changed over the last few years and if it has, in what ways? Since 1975 and the introduction of second wave feminism, the world has been exposed to a major change with respect to the positions which women hold in society. Where the kitchen was once deemed the only place where a woman could reside and wile her days away, this has subsequently been replaced by, the once exclusively male dominated domain of, ‘the office’.

Don't use plagiarized sources. Get your custom essay on
“ Women journalists ”
Get custom paper
NEW! smart matching with writer

Changes in the social, economical, political, sexual and cultural powers which stood between men and women have shifted and now it appears that women can take on and even control previously male dominated industries. The media industry is no exception to this change. However, it did not give in quite so easily to the empowerment of women as other sectors, and it appears that problems still exist within the workplaces of this industry today.

After the civil rights struggle and anti-war movement of the 1960s, women were able to find careers in many areas, here, specifically, journalism.

While they were given jobs it appeared to be not because of their talents, but more due to the necessity to show that the industry was neither bias nor sexist. Before the changes listed above, reporting on the news was seen as being a job directed at males. This may be because the desired traits of a journalist are more aligned to those possessed by the male species.

“1 These attribute are stereotypically uncharacteristic of the feminine form, who tend to be more “compassionate, caring, loving, maternal, sympathetic”2 which supposedly render them unable to produce effective stories on the ‘hard-beat reports’. It is accurate that women tend to report on less serious, more light-hearted news topics, highlighting the truth that “women remain typecast as marginal to the serious world of politics and business”3.

Such areas rely on being told by men with their supposed higher levels of ‘expertise’. It is a rare occasion that we see women telling us about the financial recession, or the war on terror, however, increasingly women have been making their way into these areas. Kate Adie is one female journalist who has certainly turned heads by ‘doing the man’s job’. Kate Adie was and still is a dominant figure in the world of war reporting.

Her perseverance and determination led her to rise through the ranks and oppression of a male dominated sector and become a world class journalist in conflict zones and war torn countries, even if she does herself describe it as being ‘largely accidental’. Adie appears to have escaped the chauvinistic realm of the newsroom by opting for an approach to journalism known as “incorporation” – this is where she has essentially adopted the male traits associated with ‘good journalism’ and infused them with her own reporting style.

The main feature of this adaption is ‘objectivity’, she shows no emotion or connection to the situation with which she is involved (often a very hard task for women as they tend to become too emotionally involved and they have a subjective nature which means they cannot render themselves impartial to the problems on which they report). Adie who has been shot and injured in her line of work, may have used these events change the way she reports and fuel her stories from a mixture of fury and adrenaline felt by her and experienced by the people whom she reports on.

Other techniques women can use to escape the repressive culture of the newsroom include: working as a freelancer, not working in an office means they are free from all the oppression which they may suffer (unfortunately this also means they often do not get picked first for certain reports – it is harder to negotiate a deal with a boss if you are not in their company); accepting they are not going to gain ‘high prestige stories’ and henceforth settling with what they have but exposing the exploitation of women from a feminist perspective – concentrating on stories which involve topics with which they do not have to feign empathy (rape, sexual assault, child abuse etc); they may also wish to set up an alternative media source from which they can report all the stories they want and really put their own spin on the story (examples of this include F. I. R. E. and Women’s E-News). Adie however is not the only example of a woman who has broken free from the mould.

If we move away from the western perspectives on this question we can clearly see that other countries’ have experienced a change in the situation within which women journalists find themselves working in. For instance, if we were to take Afghanistan as an example: during the Taliban’s regime, it was mandatory than Afghan women stayed at home and were not seen in public.

After the United States led military intervention however, thousands of these girls and women took up jobs in the world of journalism. It was in fact a female reporter who announced the fall of this fundamentalist rule. While this is not representative of all women in the east it does show that women in journalism are being given more opportunities. Male correspondents still remain to be a dominating force this side of the world. 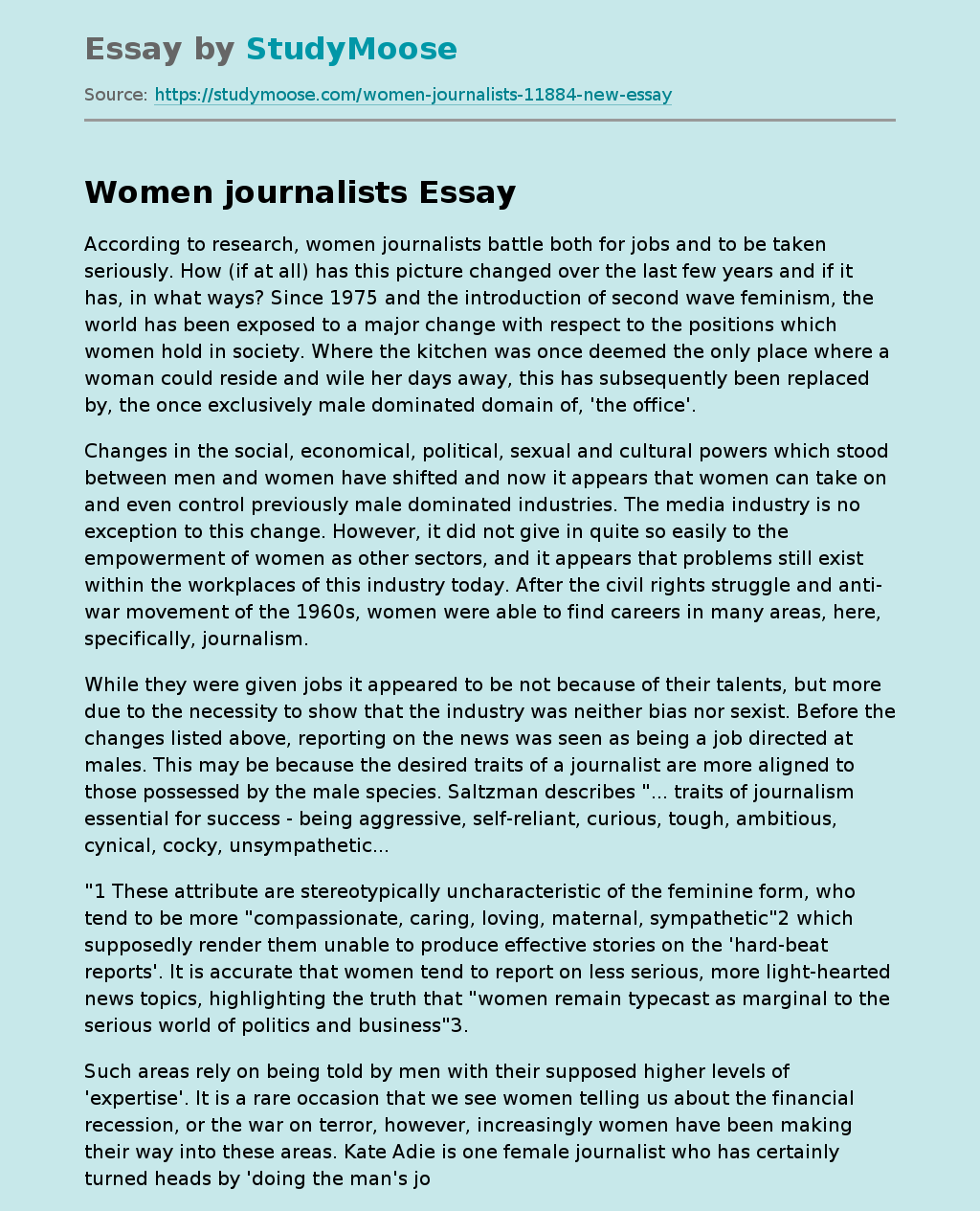