Gender discrimination against women has been very evident in many countries – from their homes, schools, workplaces to public places. According to an article by the United Nations Human Rights, the number of women living in rural poverty has increased by 50% since 1975. They also form the majority of the world’s poorest people. Women produce half of the world’s food and two-thirds of the world’s working hours, however, they earn only 10% of the world’s income.

Additionally, 50% of women across the world are denied freedom of speech, basic rights education, voting power, and even independent identity.

Don't use plagiarized sources. Get your custom essay on
“ Gender Discrimination Against Women and Women Empowerment ”
Get custom paper
NEW! smart matching with writer

Many crimes committed directed specifically against women are also rampant. Violence against women worldwide prevails in many cultures and their access to discrimination is often paired with discriminatory obstacles. According to an article by Indian daily newspaper The Asian Age, women’s literacy rate around the world is very alarming. The National Census Report 2011 found that the literacy rate of the female population was at 57.

These figures show the alarming gender inequality and women disempowerment around the world. Although there have been many campaigns and movements fighting for equality and ending oppression, the patriarchal society does not make any of it easy.

The least we can do to support the fight for gender equality is support and empower women. If women are empowered, they can conquer their fears and fight back against sexism and toxic masculinity. In return, this world can be a much better place for them in all aspects.

Why is Women Empowerment Important?

There’s no exact event where we can see how the concept of women empowerment started. Probably the most notable would be the women’s suffrage movement which started in 1848, aiming to let women vote. During this era, many protests, strikes, and marches were held by women. All of that was possible because women were empowered to stand up for themselves. Today, it is still necessary to empower women to make their own decisions.

Empowering women means that they are encouraged to exercise their ability and power to live their lives in the way they wish, allowed to achieve their goals, and given a platform to be heard. Being empowered is one of the ways underprivileged women, as well as the reasonably privileged, are able to realize their potential and worth in the face of a male-dominated society.

According to an article by Women Now, a fast-growing website for modern women in India, gender bias has become very unreasonable, especially for women. As a result, women are questioning their self-worth, confidence, and freedom. Women empowerment is important because it allows them to understand that they have the same capacity and skills as men. They should have the same opportunities and responsibilities, simply because they can.

Additionally, empowering women means giving them equal rights to participate in education, politics, and economy. They should be involved in a society where they are given the opportunity to choose their work, religion, language, and other aspects. Women empowerment is about showing women that they should not be dependent on men and that they can stand up for themselves. Empowering them shows how they are important in society, thus, reducing their risk of falling victim to domestic violence.

Over the past few years, many countries have taken enormous strides towards the inclusion of women in several industries. However, true development and growth in terms of championing women’s rights can only be achieved by taking successful moves in eliminating deep-rooted ideologies of discrimination and gender bias. This can protect women from being excluded from the public and political sphere because of their gender and poor access to health services, nutrition, education. and employment.

What Does Women Empowerment Mean?

Women empowerment is all about encouraging women to generate confidence to face any difficult situation, having positive self-esteem, being economically independent, being self-reliant, and inviting active participation in various socio-political development endeavors. Empowering women shows that we see them as capable individuals that can make rational and educated decisions. This improves women’s legal, political, and economic strength.

According to an article by Cultural India, an online site of Indian culture, there are many facets of women empowerment that our society needs to address. The first one would be their right to express their opinions and views freely, without anyone restricting them. Aside from that is the promotion of gender equality, which is the most critical aspect of social empowerment. Gender equality is about having the same opportunities, rights, outcomes, and obligations as men.

Additionally, women empowerment is about reducing the financial dependence of women on men. Women, just like men, have the capability to provide for themselves financially. It is also important that our society encourages women to participate in governance and political decision-making processes. 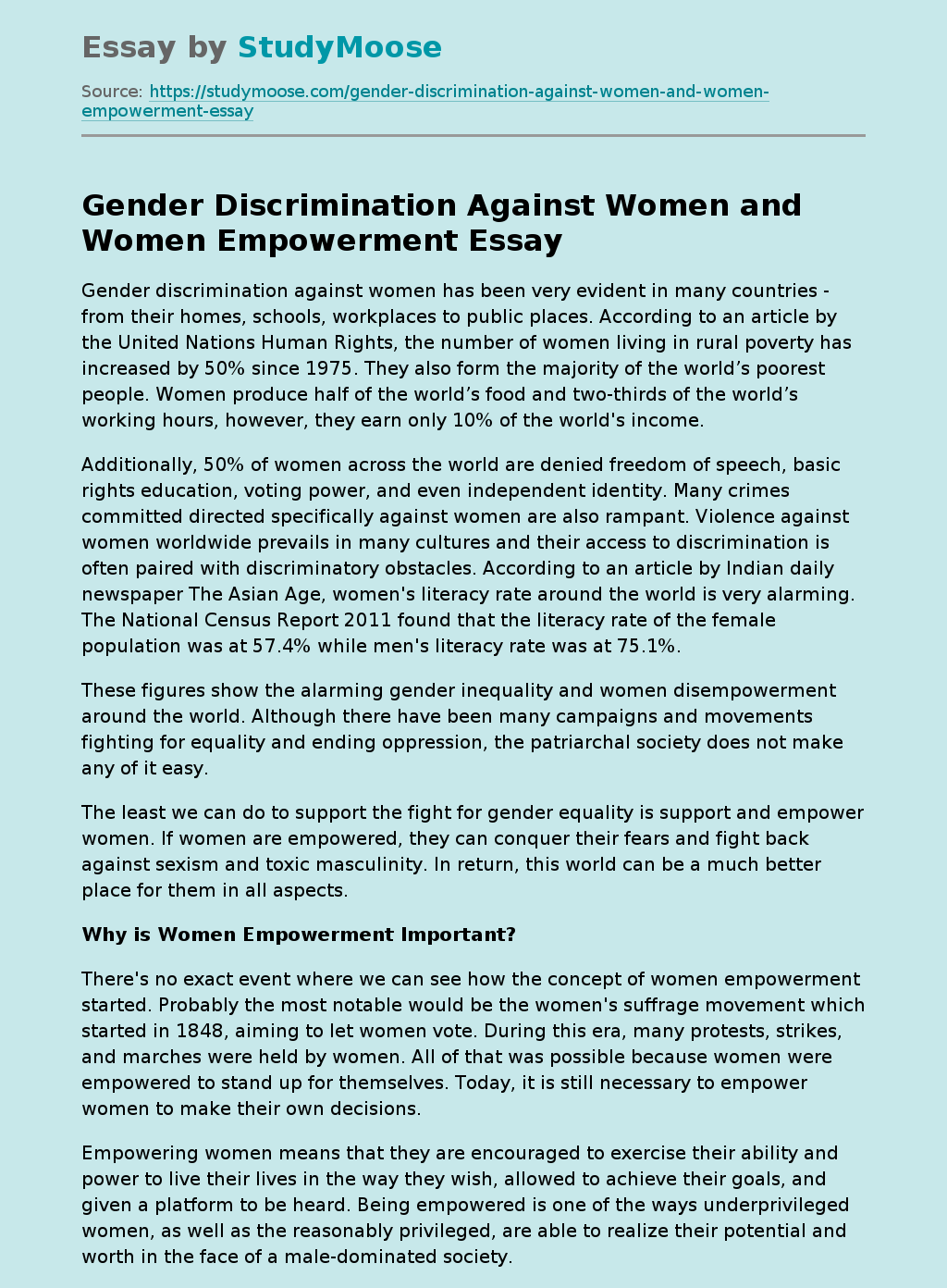