Women Empowerment has been addressed in Various national and international communities and took various efforts to empower them so as to enhance their social and health status and involve them in development activities. Women empowerment in political, economic, social, cultural and business activities plays a significant role in today’s life. There are significant divergences in the women’s empowerment across different states and socioeconomic and cultural settings. Women’s educational levels emerged as an important predictor for all the dimensions of women empowerment.

Don't use plagiarized sources. Get your custom essay on
“ Women empowerment ”
Get custom paper
NEW! smart matching with writer

Additionally, government self employment training schemes and media exposure have emerged as the important tools for women’s empowerment.

Today we have noticed different Acts and Schemes of the central government as well as state government to empower the women of India. But in India women are discriminated and marginalized at every level of the society, whether it is social participation, political participation, economic participation, access to education, and also reproductive healthcare. Women are found to be economically very poor all over the India.

A few women are engaged in services and other activities. So, they need economic power to stand on their own legs on per with men. Other hand, it has been observed that women are found to be less literate than men. According to 2001 census, rate of literacy among men in India is found to be 76% whereas it is only 54% among women. Thus, increasing education among women is of very important in empowering them. It has also noticed that some of women are too weak to work.

Therefore, from the health point of view, women folk who are to be weaker are to be made stronger. Another problems is that workplace harassment of women. There are so many cases of rape, kidnapping of girl, dowry harassment, and so on. For these reasons, they require empowerment of all kinds in order to protect themselves and to secure their dignity Women safety is a primary concern. As we know women are victimized in all walks of life – Discrimination as girls, Abuse As Adolescents, Harassment and Molestation at Work & Public Places, Domestic Abuse at Home and more.

Economic empowerment is thought to allow women to think beyond immediate daily survival and to exercise greater control over both their resources and life choices. For example, it enables households to make their own decisions around making investments in health and education, and taking risks in order to increase their income. There is also some evidence that economic empowerment can strengthen vulnerable groups’ participation in the decision-making. For example, microfinance programs have been shown to bolster women’s influence within the household and marketplace. The evidence also suggests that economic power is often easily ‘converted’ into increased social status or decision-making power.

Social empowerment is understood as the process of developing a sense of autonomy and self-confidence, and acting individually and collectively to change social relationships and the institutions and discourses that exclude poor people and keep them in poverty. Poor people’s empowerment, and their ability to hold others to account, is strongly influenced by their individual assets such as land, housing, livestock, savings and capabilities of all types: human (such as good health and education), social (such as social belonging, a sense of identity, leadership relations) and psychological (self-esteem, self-confidence, the ability to imagine and aspire to a better future). Also important are people’s collective assets and capabilities, such as voice, organization, representation and identity.

Political empowerment means empowering women in politics. The Women’s Reservation Bill providing for 33% reservation of seats for women in Lok Sabha and state Assemblies is expected to come up again in the Rajya Sabha soon.

In this contemporary world, women need to gain the same amount of power that men have. Now, it is time to forget that men are the only holders of power. In India, women are still facing different obstacles in male-dominated cultures. The things are related to women’s status and their future. I believe that Indian women are slowly getting empowerment in the sectors like education, politics, the work force and even more power within their own households. The worth of civilization can be arbitrated by the place given to women in the society. We have come across a more image of gender differences. Each year, we notice that the headline as “Girls outshine boys” in CBSE, ICSE and State Board results as well. It arrests us showing that girls are now more confident of getting better-paid professional jobs than their drooping male counterparts. This achievement of girls is an absolute reversal of what would have been expected a generation ago. This is likely to guide to higher-income jobs.

Women today are ruling over the world and making their mark in various fields with the dedication and hard work shown by them to excel in their area of expertise. Women are not treated as an object or slave, rather they have now become independent of unethical societal norms imposed on them. As a result, companies are hiring are women force in more numbers since they have shown excellence in dedication towards their work as well as striking a perfect balance between their social, personal and professional life. Female job seekers were not given much preference earlier but now they are preferred candidates for many jobs.

When a woman can plan her family, she can plan the rest of her life. When she is healthy, she can be more productive. And when her reproductive rights — including the right to decide the number, timing and spacing of her children, and to make decisions regarding reproduction free of discrimination, coercion and violence — are promoted and protected, she has freedom to participate more fully and equally in society. Gender equality implies a society in which women and men enjoy the same opportunities, outcomes, rights and duties in all spheres of life But, an upsetting place still remains for Indian women is the negative sexual attention that women often receive. Indian societies have received notoriety (ill fame) for being unsafe for women. Nearly 10 million baby girls have been killed in the last twenty years alone. Clearly, safety is an obsolete word in today’s India. It is the duty of law enforcement agencies to prevent crimes against women but they fail to solve this scourge alone. People must come forward to help in rooting out such social evils. Law enforcing agencies cannot work alone.

Women hold the key to a future free from hunger and poverty. By supporting women’s education, training them as business leaders, equipping them to become better farmers and aiding those displaced by conflict, the Women’s Empowerment Fund is giving WFP and its supporters a new way to help them do that. Now a day’s there are many schemes organized by government and schemes offered by financial institutions. These day’s education and media are playing a major role in women’s empowerment.

“A hand that swings a cradle, if given power can rule a country.” There are many legends how paved a path for women like Mother Theresa, Indira Gandhi, Kalpana Chawla, Indra Nooyi, Aishwarya Rai and so on. Women has to take these legends as a role model and to move forward for better development of our Nation.

It will improve the standards of the women in every walk of life, to take her own decisions regarding her life. With the empowerment of women the family will be enriched and will improve the society and thereby Nation. Educating a male means educating an individual where as educating a women means educating the family. As mother is the first teacher for a child if she is educated she can make a path for her children and take care of entire family.

International women’s day is a day to reflect on the achievements of the women and to celebrate the progress made to women empowerment. Hence we conclude that women empowerment leads the betterment of the Nation. 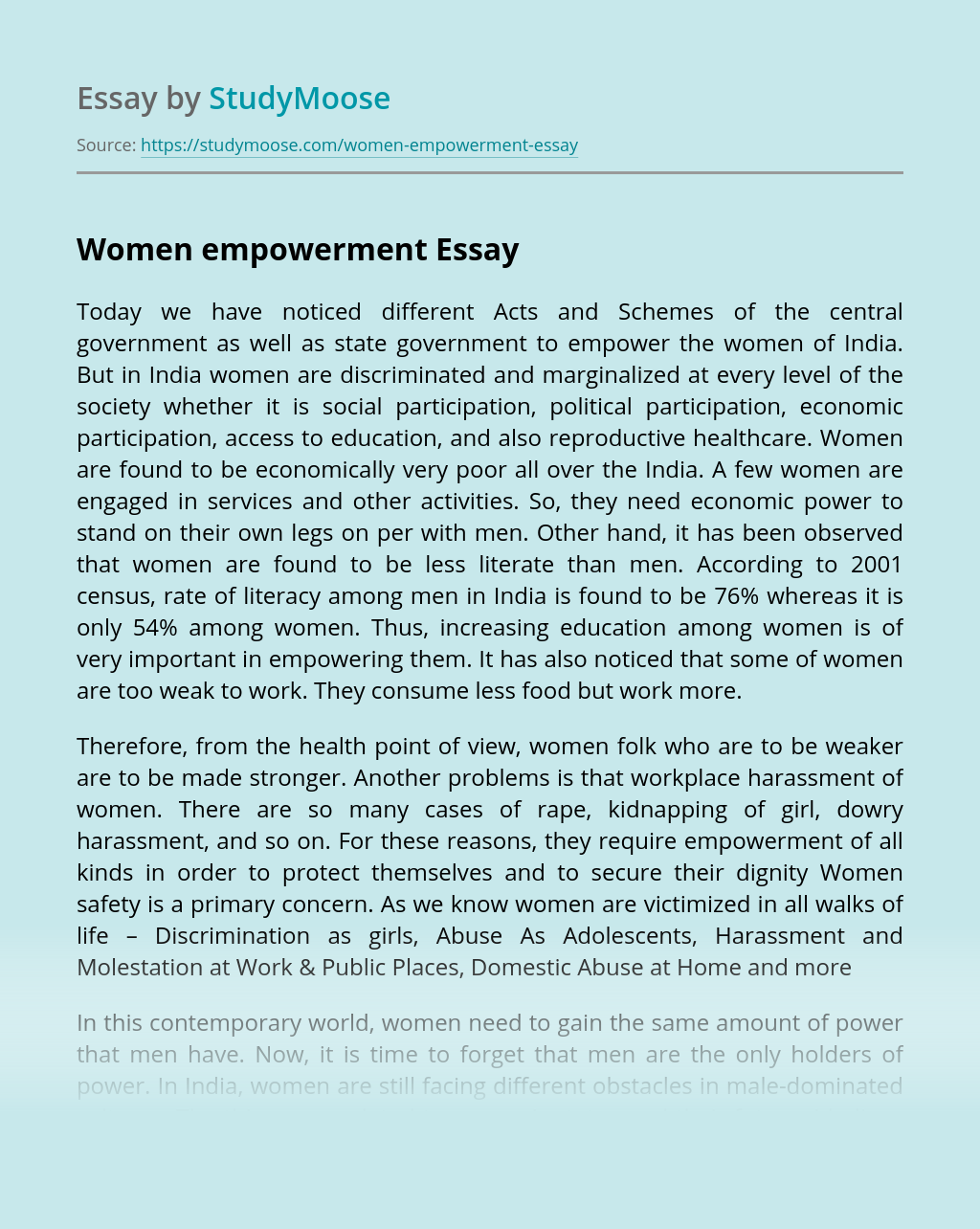