Socio-Economic Empowerment Of Women In India

The objective of this paper is to put forward a broad idea about social capital and its implication in experience for socio-economic empowerment of women through self help groups (SHGs) like Kudumbashree program in Kerala. The word Kudumbashree in Malayalam, denotes that prosperity of family. The happiness and economic sufficiency among women influence family-the basic component of society directly and whole society indirectly. It is a flagship program of Kerala state government, for poverty eradication which provides self-employment opportunities to women below poverty line.

Don't use plagiarized sources. Get your custom essay on
“ Socio-Economic Empowerment Of Women In India ”
Get custom paper
NEW! smart matching with writer

It has been acknowledged in enumerable studies that the social and economic empowerment of women have a significant positive impact on the poverty eradication and economic development of the state and society. In this paper, it is focused on concept of social capital and its liability in implementation for socio economic empowerment of society. There had been increasing research in concept of social capital recent years in social sciences .

Generally, it is defined as, social organization such as networks, norms, and social trust that facilitate coordination and cooperation for mutual benefit.

The concept has related with various disciplines by its application, compiled with integration of sociology, economics including civic tradition, public involvement and folk culture. The first point to clear up is how the idea of social capital resembles with idea of capital. The word ‘capital’ means what produces wealth, or resources are produced in order to produce other goods in the future. Economy is the basic structure, the development of society moves on two tiers, social development and economic growth.

The idea of social capital traces its roots in early sociological works, and thinkers who made the debates and popularized are Pierre Bourdieu, James Colman and Robert Putnam. The concept was introduced in West, it explained as social well being, as education, economic prosperity, health, happiness and democratic engagement. Two sides of Social capital are Bond capital and Bridge capital, first, create social network among community with same identity, later bond networks class wise among different communities with different identities. .

Social capital can be defined both at individual and collective level. At individual level it can be operationalized as the number of contacts a person has in the society, and degree to which these contacts trust each another. At collective level the emphasis is on aggregated measurements of average social contacts and networks and the level of trust embedded in them. This integrative approach shows that social capital is basically featured by existing individual social ties being the foundation for collective capital. In context of Kudumbashree program, it aims creating social capital by forming horizontal and vertical social networks establishing new norms and values of reciprocity and fostering new level of social trust with collective action in facing poverty and its causes employing with problems of poor people. There are three distinguishing characteristics to Kudumbashree which set it apart from the usual SHG model of empowerment.

As observed, it has forced a rethinking of development policies which began to conceptualize women as agents of productive process and identified women’s marginalization as the chief cause of their deteriorating status. Women the basic unit in the family and she is shouldering all most all the responsibilities in the family. The process of empowerment becomes the signal light to their children, their families and the society at large. There are three levels at which women can participate in it,

Capability of deprivation is the root cause of poverty and to make them aware of their entitlements the first and foremost step adopted by the mission is to build an organization structure of the poor. It is divided in three levels. 1- The Community Based Organization (CBO): The Community Based Organization, which encompasses all sections of poor, is organized in to three tier structure. The Neighborhood Group at grassroots level consists of 15 to 40 members; each member representing a family forms the building block of the organization. In each Neighborhood Group from among its members, five volunteers are elected for undertaking various functional activities. The position of a volunteer is the first stepping-stone towards leadership for a woman from poor family. 2- Area Development Society (ADS): It is formed at ward level by federating 8-10 NHGs. The activities and the decision in the ADS are decided by the representatives of the poor elected from various federating NHGs.

3-Community Development Society (CDS) At the Panchayat level a Community Development Society (CDS), a registered body under the Charitable Societies Act is formed by federating various ADSs. By succeeding in being an agent of bringing social change in society Kudumbashree had influenced different aspect of social life. As, economic development, agricultural revolution, social status, educational improvement, public awareness and participation, cultural transmission, rehabilitation and social tourism. Most of the programs of Kudumbashree have promoted the financial improvement or high income of the family. They are supporting the activities related to the economic growth of family through the participation of women and poor people, as part of the influence of Kudumbashree project the people started getting financial support from banks in low interest and getting loan, grants and subsidies in name of Kudumbashree units.

Through the advancement in educational, and economic spheres of the people it also brought the social participation thus the social status also subjected to a drastic change, the rural women and poor people by member of the Kudumbashree unit they starts being active participant in the largest poverty alleviation program and also participant in all meetings of the unit weather it is NHG, ADS, or CDS. Kudumbashree has enabled the women to share their personal experiences and this in turn has given perspective to the individual situation of many women and transformed their personal feeling of hopelessness into a feeling of being part of a collective spirit. They have been able to develop a social network in the neighborhood area, which to some extent has evoked a feeling of social security. Social impact of Kudumbashree project in alleviation of the poverty as an agent of self empowerment Social impact consists of three basic rules. The first rule is that social impact is the result of social forces including the strength of the source of impact, the immediacy of the event, and the number of sources exerting the impact.

The second rule is the psychosocial rule that says the amount of impact tends to increase as the number of sources increases. However, the most significant difference in impact exists between having 0 sources and having 1 source. The third rule is that the number of targets also affects social impact. The more targets of impact that exist, the less impact each individual target feels. Kudumbashree as social entrepreneur had immensely created the influence and working as succeeding enterprise, Social entrepreneurs are successfully mobilizing both the human and financial capital required to start and scale their social ventures, building around new opportunities, unless there is a clear understanding by funders and investors. Kudumbashree has the mission of eradication absolute poverty, we can read the mission as ‘to eradicate absolute poverty in ten years through concerted community action under the leadership of Local Self Governments, by facilitating organization of the poor combining self-help with demand led convergence of available services and resources to tackle the multiple dimensions and manifestations of poverty, holistically’.

The social empowerment was implemented through the women to the family and through the family to the society. The different kinds of programs adopted by Kudumbashree helped it in influencing the society and act as an agent of change. It had internalized the vision of MK Gandhi “If you give education for a boy you, you are educating an individual and if you are giving education to a girl, you are educating an entire family” and the notion of former Indian president APJ Abdul Kalam ‘the thoughts and value systems of the empowered women lead to the development of a good family, a good society and ultimately a good nation.

Socio-Economic Empowerment Of Women In India. (2016, May 26). Retrieved from https://studymoose.com/socio-economic-empowerment-of-women-in-india-essay 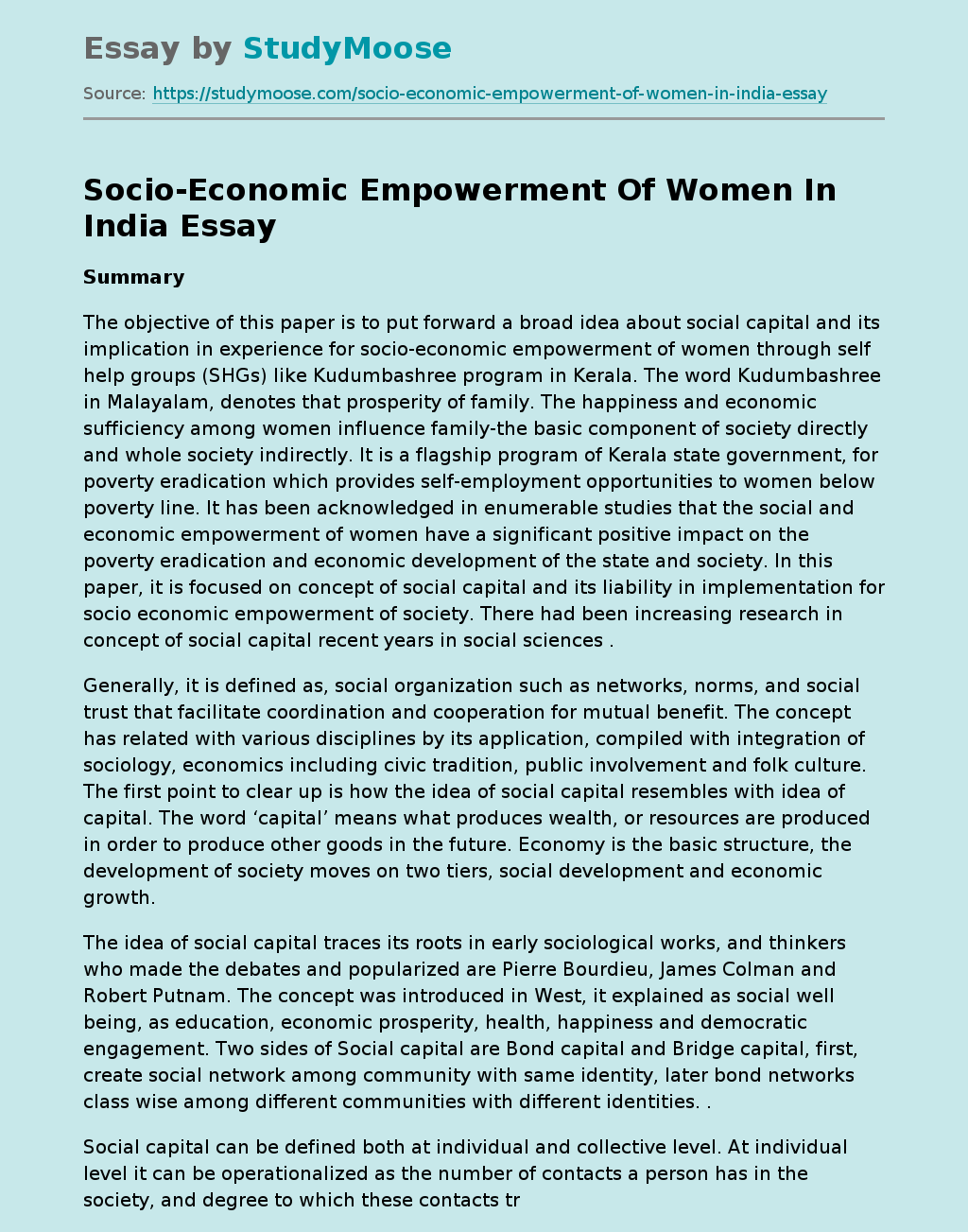