Why Music Censorship is No Longer Necessary?

Censorship of music is the practice of restricting free access to musical works. This censorship may stem from a wide variety of motivations, including moral, political, military or religious reasons. Censorship can range from the complete government-enforced legal prohibition of a musical work, to private, voluntary removal of content when a musical work appears in a certain context. In order to allow songs to be played wherever possible, it is common to censor particular words, particularly profanities.

Some music labels or artists produce censored versions themselves, sometimes with alternative lyrics, to comply with the rules set by various radio and television programs.

Don't use plagiarized sources. Get your custom essay on
“ Why Music Censorship is No Longer Necessary? ”
Get custom paper
NEW! smart matching with writer

But is this necessary? Would censoring music now be innovative or post-modern? Some people think this censorship is pointless because much of the time, the audience knows what the word is anyways. For instance, in many songs, the word “ass” is usually censored when it is used as an insult or sexually, usually by distorting the word, or silencing part or the whole word.

The word “asshole” is usually completely censored, but sometimes, only “ass” is censored, while “hole” is not. This would make it very easy to be known to the audience what the word being said is. This is also true for the censorship of the word “shit” when only the “sh” is pronounced, such as in the radio edit of Gwen Stefani’s “Hollaback Girl. ” Parents are against this censoring because when they keep part of the word or leave it obvious what word is being said, their kids still know what is being said and can still sing, even if only in their heads, the real words.

Other people take offense to certain censors. For example, when the Taylor Swift song “Picture to Burn” first hit airwaves, some radio stations changed the line, “That’s fine, I’ll tell mine that you’re gay” to, “That’s fine, you won’t mind if I say”. Some listeners took offense to the fact that they changed it because it is implying that being gay is a negative thing or is something that shouldn’t be heard or talked about. The opposite is true about a song like Panic at The Disco’s “I Write Sins Not Tragedies” where people take offense if they do not censor the word “God.

” Others feel that if some things are going to be censored, there are many other things that should be censored. In Afroman’s “Because I Got High” the word “paraplegic” is usually censored out to not be offensive, along with any “curse words” yet the whole song is about getting high and doing drugs and that part isn’t censored, so what is the point of only censoring one piece of it. This also goes back to the previous point, where it could actually be offensive that they blank out the word “paraplegic” at all.

Either they only censor some things but not others, or they only censor out the same word in certain cases. This is true of the word “pissed,” which gets censored out in a song like “Lighters” by Bad Meets Evil where it is being used to mean peeing, yet it is not censored in a song like “Scars” by Papa Roach where it means angry. The majority of the people who support censorship are parents who like to listen to the radio with their kids in the car.

Many parents feel that the censorship helps keep the radio safe for their kids to listen to, yet if they are only censoring out words, that doesn’t mean the content is censored. For instance, Rihanna’s “S&M” was still able to play on radios, with certain words censored out, yet the content of this song is dirty anyways. A child can still learn and sing the other words of these songs without the curse words. Studies show that 80-90 of a person’s spoken words a day are curse words, if such is true, then chances are that a child will be hearing and learning these words anyways.

Words censored today are not new words; they are words that have often been used in things bigger than conversation. Shakespeare used many words that would be censored in modern day, yet we still teach his works in school. Another example of this is in the book To Kill A Mockingbird, while “the n word” and any variation of it is blanked out in music, we still have schools teaching this book where it is said around 48 times. Even the bible has words, such as “piss” that are censored in music. Why not censor these words elsewhere?

The main reason music censorship has become unnecessary is because it really has become irrelevant. If these words are going to be heard regardless, whether in a conversation we are included in or just listening to, or in school or church, then what is the real point of censorship? Music is, and has historically been, censored to try and enforce morality. The reason this no longer works is because morality is a decision to be made by a person themself, and therefore everyone’s morality is different.

Not only that, but there are generational morality gaps because of when someone grew up. Something censored out to one person may not need to be censored out to another, and therefore most people will be exposed to the uncensored versions of songs anyways. Music censorship really began its pickup in the 1950’s, this was a time when traditional and conservative values were being enforced. If we no longer enforce the same values brought in at this time, why try and continue a concept that was really brought in at this time?

Why Music Censorship is No Longer Necessary?. (2016, Jul 06). Retrieved from http://studymoose.com/why-music-censorship-is-no-longer-necessary-essay 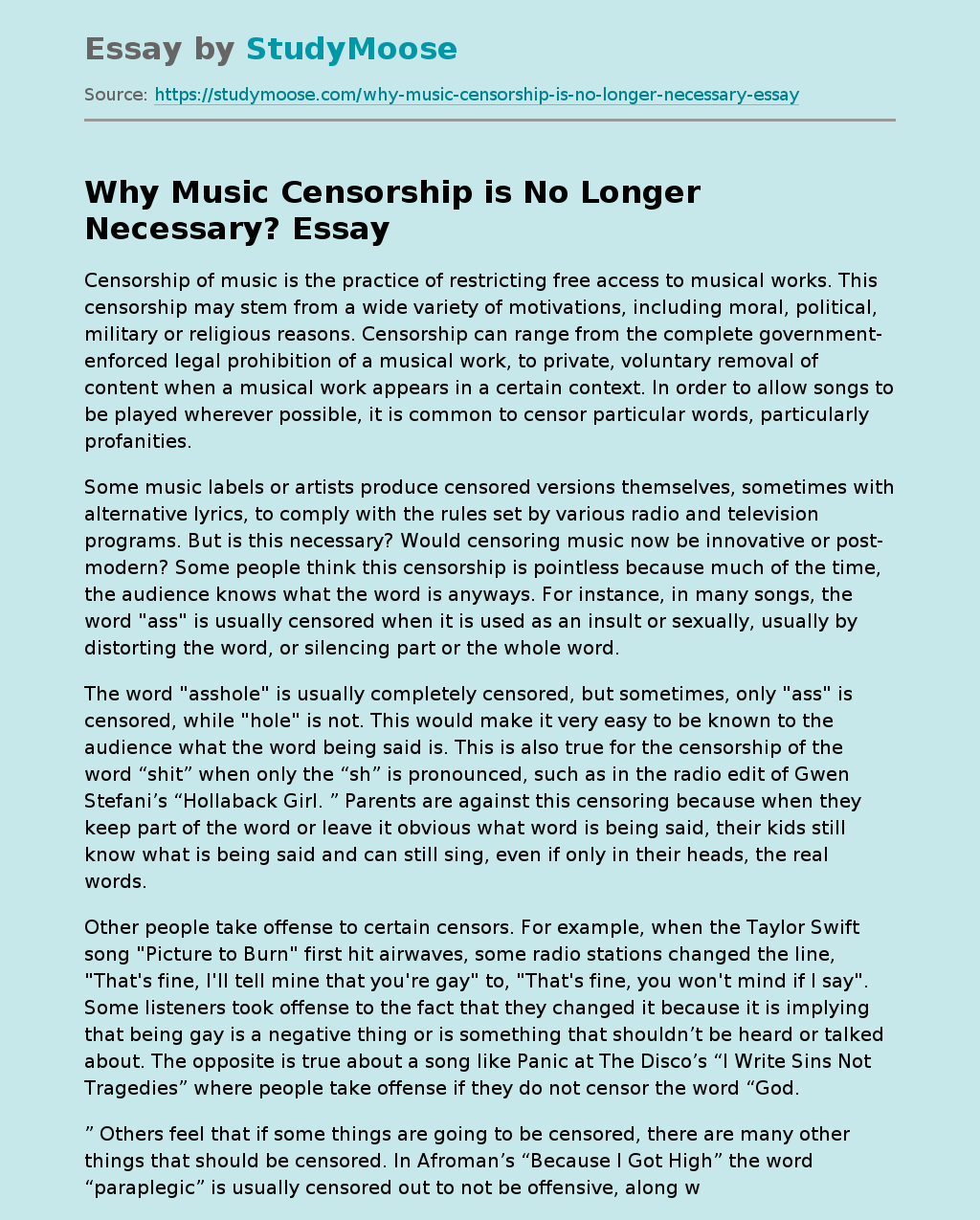