In the following paper I will talk about A.J. Ayer’s “Freedom and Necessity,” and I will explain the dilemma of determinism and Ayer’s compatibilist solution to it. I will explain some of the examples Ayer uses to explain the difference between cause and being constrained, and how both affect one’s free will. I will also discuss on why Ayer’s compatibilism solution to the dilemma is the best solution so far.

According to A.J. Ayer, the problem of free will is the result from the conflict of two different assumptions, which are men acting freely while being morally responsible for their actions, and that human behavior comes from causal laws.

Don't use plagiarized sources.
Get Your Custom Essay on Ayer, A.J. “Freedom and Necessity” Just from $13,9/Page

Ayer begins by attacking the determinist for the most part. Determinism is the view that there is no freewill, and all events and actions are determined by causal laws. Causal laws cast doubt on freewill because a person may not act freely if their actions are causally determined.

In other words determinist believe that every thing one does, has done, and will do; are actions that have been pre-determined at the origin of the universe. It is here where the dilemma of determinism begins.

The dilemma of determinism begins with the question asking oneself, how did I come to make my choice? Was it an accident or was it not? An accident is a matter of change, and no choice is involved. Well what is choice? Choice is an act of selecting or making a decision when faced with two or more possibilities. If one’s choice is not an accident, then presumably their is some causal explanation of one’s choice. In which this leads back to determinism. Compatibilism is the solution offered to solve the problem of determinism.

Compatibilism is the belief that determinism and freewill are compatible ideas. In other words, both moral responsibility and determinism can exist at the same time. Since determinist believe that the opposite of being free is caused and determinism, Ayer offers a compatibilist solution to the problem of determinism in which it states that the opposite of being free is constraint, and not cause. No longer is this freedom vs. cause, but instead it is now viewed as caused vs. constrained. Caused is certain conditions obtain and something happens.

Constrained is certain conditions obtain and something is compelled or forced to happen. Ayer uses an example of a common thief and a kleptomaniac to illustrate his point. He states that a thief makes his own decisions when stealing. The thief can stop himself from doing such crime and choose not to steal. The thief is then faced to be dealing with cause where freewill and moral responsibility apply. While a kleptomaniac suffers from such disease in which he has no choice when it comes to stealing. He is then faced to deal with constrained where freewill and moral responsibility do not apply. Both of these take place while containing determinism. So cause is part of freewill and not the opposite.

There are objections that arrises to Ayer’s compatibilist solution. One is the invisible chains of causation objection. It states that all of our actions are constrained by causal laws. Ayer’s response to it is that the causes in both cases of the thief and the kleptomaniac are different. One is constrained while the other is entirely based on caused. Another objection is the all causes necessitate equally objection. It states: “For why should we distinguish, with regard to a person’s freedom, between the operations of one sort of cause and those of another? Do not all causes equally necessitate? And is it not therefore arbitrary to say that a person is free when he is necessitated in one fashion but not when he is necessitated in another?” (Ayer, 116). Ayer defends by saying, “For all that is needed for one event to be the cause of another. is that, in the given circumstances, the event which is said to be the effect would not have occurred if it had not been for the occurrence of the event which is said to be the cause. . .” (Ayer, 116-117).

The last objection is the all actions are predictable objection. It states that all of our actions or everything we do in this world, has been predicted by some force or by God. Therefore, we are all “prisoners of fate” according to Ayer. Ayer defends this by saying that even if God knows everything one will do, one still has free will, right of choosing, and we are not prisoners of fate. Ayer says, “What it does entail is that my behaviour can be predicted: but to say that my behaviour can be predicted is not to say that I am acting under constraint” (Ayer, 118).

He calls these objections tautologies and says they can not prove anything about free will. To have free will is to say one could have acted otherwise. Ayer has three conditions that would make this statement true. The first one is that in order to be free one must make a choice. The second is that the choice made would have to be a voluntary unlike the kleptomaniac. The third is that no person or thing can force one in making that choice. He says that only then will the three conditions be fulfilled and one would completely be free.

I think Ayer’s theory of compatibilism is a good solution to the dilemma of determinism. It is a solid argument which provides sufficient information to make one believe that compatibilism is the correct answer to the problem of determinism. His examples of the thieve and kleptomaniac make his argument very concrete and easy to understand the common difference between being caused and being constrained. By far this is the best argument. Works Cited. Ayer, A.J. “Freedom and Necessity.” web. 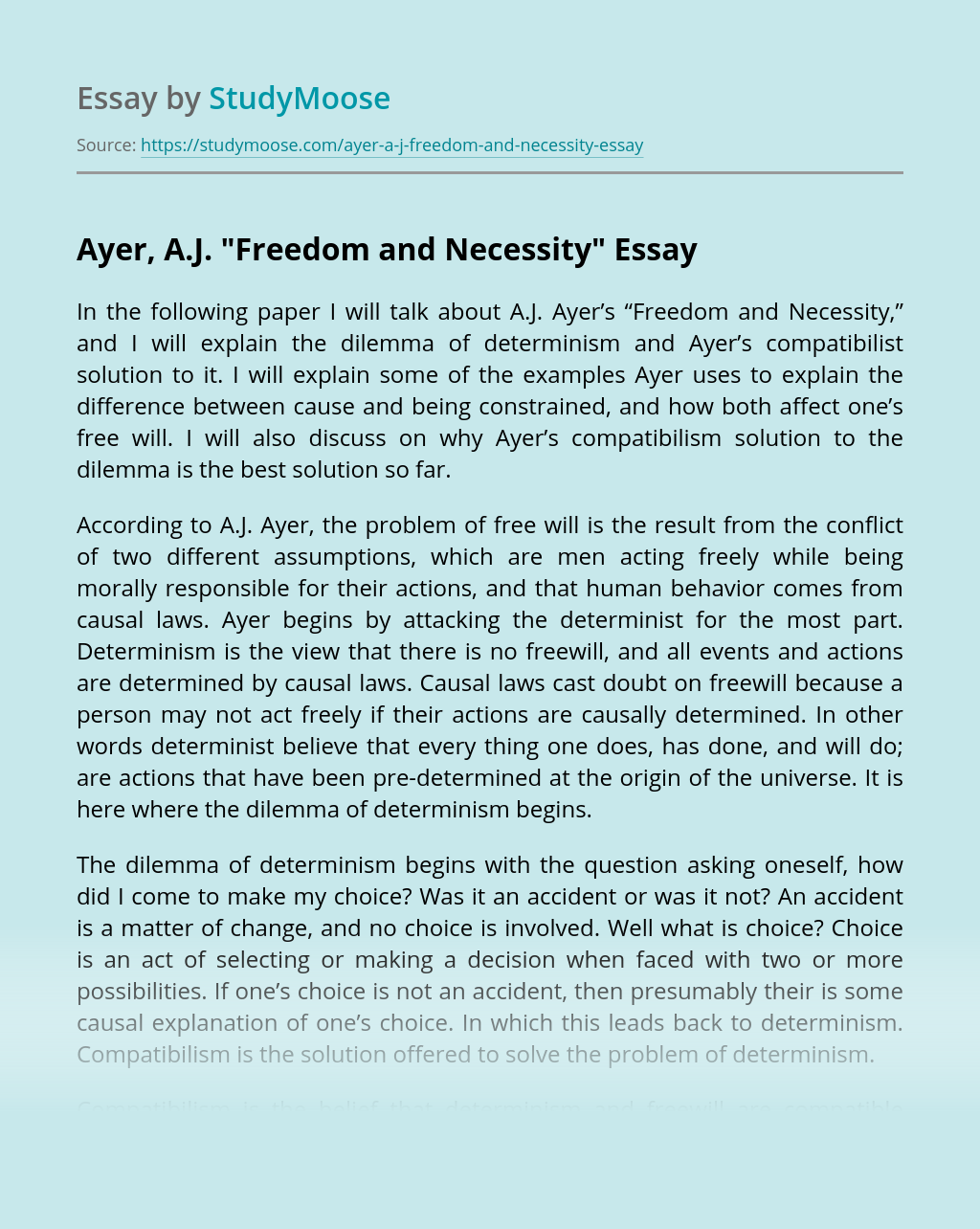 The Benefits of Bamboo and Bamboo Clothing

Bamboo plant has been necessary plant in life for numerous people all over the world. It is among the versatile plants where its usages ranges from structural support for housing, flooring tiles, rebar in concrete, musical instruments, searching, fishing rods, rafts, bridges, medication, roofing, clothing to water and soil preservation just to discuss however a...

How Have Our Ideas of Heroes Changed over Time

In the beginning of cinema heroes and heroines tended to stay within the mythic structure of heroes using binary pairs of opposite terms to simplify the complexity of events and reducing the players down to good guys and bad guys or more cinematic, white hats and black hats. That changed radically in the late 1960’s...

Introduction The Everest Simulation permits individuals to experience group dynamics and leadership through the dramatic online setting of a Mount Everest exploration while playing one of 5 functions on a group of hikers. As part of the course curriculum, I was randomly appointed to be the leader and worked with 4 other students. I took...