Necessity is the mother of all invention

Necessity is the mother of all invention’. Improvements at Toyota evolved out of a strong need to discover a new production method.

Japan faced an economy in crisis immediately after the Second World War. The country’s scarce resources at the time had a huge influence on the culture within the company and its values. Japan is a small nation, where land scarcity, lagging industrial development, shortage of raw materials due to high transport costs and limited financial resources, were key influencers in the creativity and development of Toyota’s values and goals to increase efficiency by consistently and thoroughly eliminating waste.

Don't use plagiarized sources. Get your custom essay on
“ Necessity is the mother of all invention ”
Get custom paper
NEW! smart matching with writer

This economic downfall and lack of resources forced the company to rationalise its work organisation with attention to the consumer’ needs and investment in worker’s knowledge base to develop a production system that focused on flow efficiency and forced them to focus on customers’ needs. The goal was to maximise flow efficiency so that value was added to the product one hundred percent of the throughput times, from order through to delivery and payment.

It was also seen as a competitive advantage to be faster and have lower inventory. America led the way with the conventional mass production system in the automobile industry, whereby they produced the same product in large, homogeneous quantities. The post-war economic hardship resulted in growing inventories of unsold cars – America responded and cut costs by mass-producing fewer car types. Toyota wanted to imitate mass production techniques, however capital constraints and low volumes in the Japanese market did not justify the large batch sizes.

Toyota felt it more economical to produce a variety of automobiles in lower volumes with rapid changeover times at a competitive cost. This system works on the principle of eliminating the overproduction generated by inventory and costs related to workers, land, and facilities essential for managing this inventory. Toyota’s inventory savings were huge which tied very much with the waste-eliminating philosophy that was being perceived by Toyota at the time. ‘By 1950, the entire Japanese auto industry was producing an annual output equivalent to less than 3 days’ of the US car production at the time’ (Holweg, 2007). In 1959, Japan experienced unusually rapid economic growth, and consequently American-style mass production was successful. But so to was Toyota’s·

Necessity is the mother of all invention. (2019, Dec 04). Retrieved from https://studymoose.com/necessity-is-the-mother-of-all-invention-essay 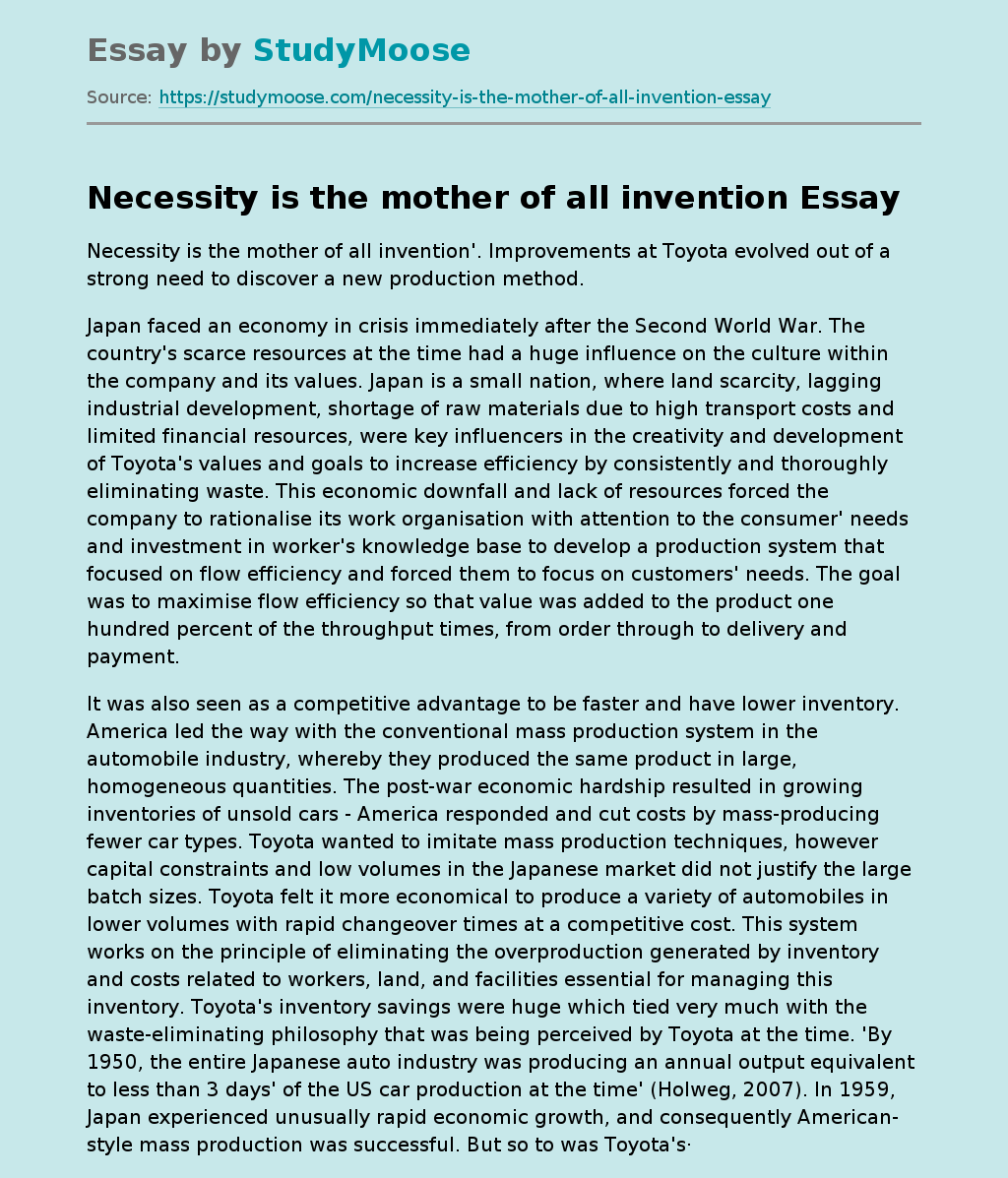