When Alexander Graham Bell first invented the telephone his intent was to create a device that would make communication over great distances easier. Today, when we want to talk to another person, what do we do? We pick up the telephone, scroll through our contacts, and press send. Because of the technology that was first invented in the mid 1800’s we can instantly connect to people in other cities, states, and even other countries. But have you ever wondered how different today’s world would be without the invention of the telephone? In my opinion, the telephone has brought about the most far reaching and lasting changes in our civilization.

Don't use plagiarized sources.
Get Your Custom Essay on Invention of telephone Just from $13,9/Page

The invention of the telephone has caused both positive and negative outcomes to our society.

Some of the advantages of the invention of the telephone are: We can now instantly contact our family and friends, businesses can spread their services worldwide, we can contact emergency personnel in the event that we need them, and it was used to help create the internet.

Some of the disadvantages of the invention of the telephone are: America is a country that thrives on instant gratification, there are a lot of safety and health concerns due to the overuse of the telephone, and the fact that people today are not as social as they once were.

Back when this country was first founded if a person wanted to get in contact with another person in another city it meant a messenger had to travel a great distance and hand deliver the letter to the intended person. The process from start to finish could take months, or even close to a year, because of the delivery time. In today’s world though, a person has the ability to pick up the telephone and instantly get an answer to a question they have.

Businesses use telephones within their offices to communicate with co-workers and they also utilize the telephone to talk to clients, business partners, or vendors that may live in different states or different countries. In the 1700’s if a baker needed milk he could not pick up the phone and order 100 gallons from Cobourg Farms that was located 200 miles away, the baker would have to buy that milk from a local farmer. Families that were separated by an entire ocean really had no means of communication until the early 1900’s. However, today not only do we have the ability to call someone on our telephones, but we also have to ability to see the other person while talking on the phone with them. In the primitive internet days we used the telephone lines to dial into the internet.

The invention of the telephone has opened unimaginable doors for the world. However, with the good the telephone brings society, it also brings some negative things into society as well. Most first world countries in the world thrive on instant gratification. We always have our phone with us and when we are without it we feel like a piece of us is missing. I myself have been guilty of talking to older generations and asking them how they ever survived without a cell phone, because having a phone within my reach 24/7 is second nature to me.

When we want to know something or want to talk to someone all we have to do is reach down into our pockets and we instantly get answers. People are less patient now-a-days and I’d like to think that has something to do with the fact that we have the world at our finger tips at any given point throughout our day. Because of the invention of the cellphone there are a number of safety and health risks that are caused by the overuse of these devices. Cellphones emit small amounts of radiation, and over time the radiation output can lead to memory problems, tumors, and other health issues.

People now also can talk on their cell phones and drive, or text and drive. A driver is not fully aware of his or her surroundings when they are being distracted by a cellphone in their hand, or a Bluetooth device that is in their ear or built into their car. Having the ability to use a phone anywhere, at any time causes wrecks and fatalities every day in the driving world. We now have campaigns against texting and driving and in some states it is illegal to talk and drive without a handless device because of the number of deaths that phones have caused. I can guarantee if you walk into any dining facility at dinner time you will see at least one family whose noses are all buried in their phones. Because of the invention of the smartphone we have access to the whereabouts of everyone in our family and all of our friends.

The telephone has played a huge role in the disintegration of our social behavior. Twelve people can be in a room with each other, but never talk to each other because they are all preoccupied on their phones. Families don’t communicate as much as they used to in person, because sending a simple text message is much easier than talking in person. In today’s generation having a phone is a natural part of life. When the phone was first invented it was only available to the rich, but over time it has become less expensive which allows more people to have access to it.

The invention of the telephone has greatly changed how society functions. I don’t think Alexander Graham Bell knew how the technology for the phone would grow when he first invented it. The phone has many positive attributes, but it also has many disadvantages as well. I urge you the next time you pick up your phone try and think about how you would have functioned 200 years ago when communication was not so readily accessible.

Invention of telephone. (2016, May 06). Retrieved from https://studymoose.com/invention-of-telephone-essay 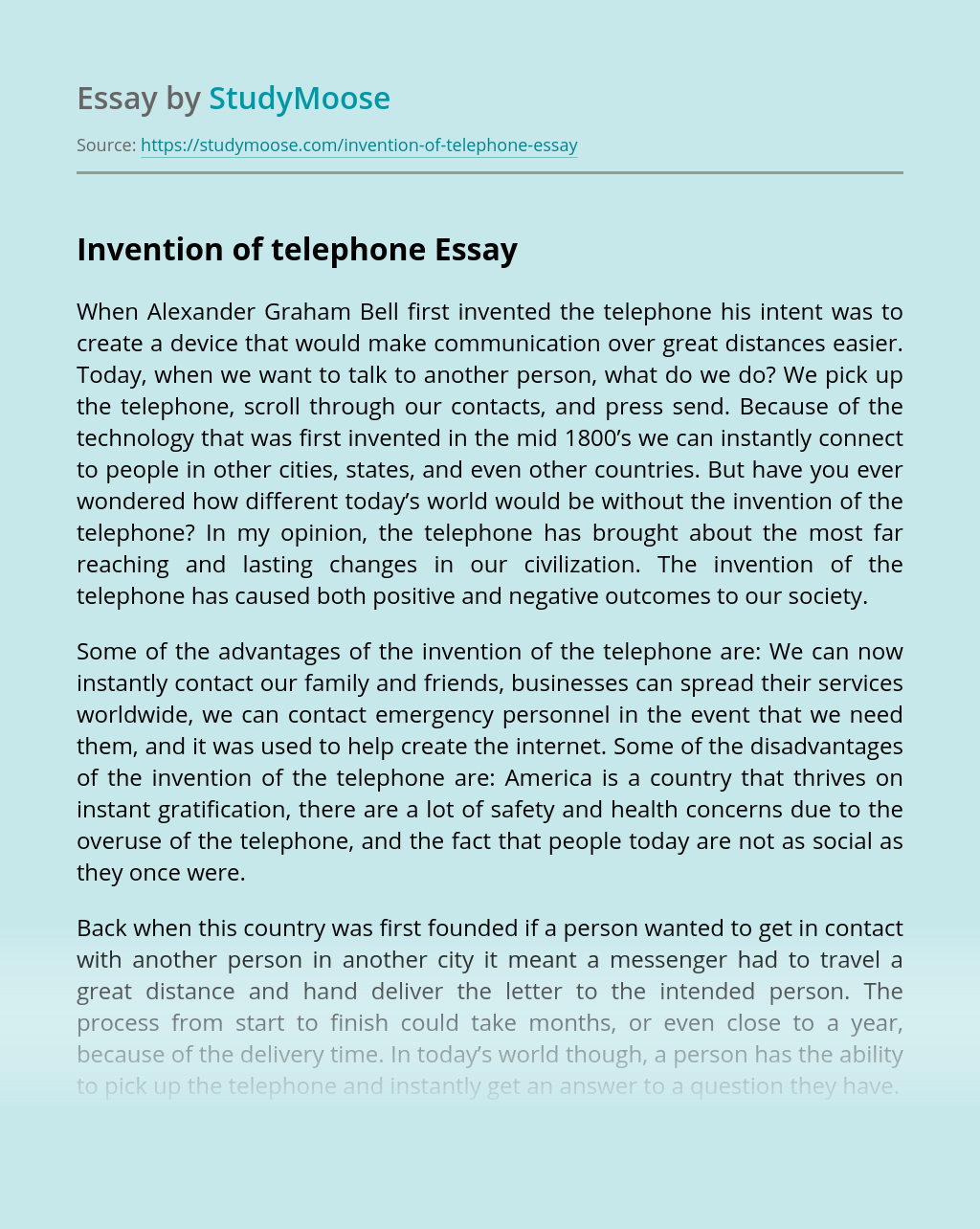 View sample
Impact of the Telephone

If you didn’t have the telephone then how would you call individuals? You would not have the ability to easily. If you wished to speak to people you would need to go to their home, fulfill them somewhere, or compose to them. That would be tough. The world’s interaction has actually been upgraded by the... VIEW ESSAY

What development soars like a bird however is much bigger? An aircraft! I bet the majority of you got that. But this here isn’t a routine invention. It’s the biggest invention. It’s so amazing. I mean we get a possibility to fly. And I bet there’s tons of other ways the airplane is remarkable. I’ll... VIEW ESSAY

View sample
Necessity Is the Mother of Invention

As soon as people need something, they invent it. For example, when ancient people felt hunger – they went on hunting and for that they invented the bow and arrows. When they needed to carry heavy cargos to large distances – the wheel was discovered. In fact, every day the humanity faces new challenges that... VIEW ESSAY