What if the telephone was never invented?

Can you imagine how different life would be if the telephone was never invented? One of the most powerful, and controversial, inventions has been that of the telephone. Alexander Graham Bell, the inventor of the telephone, had no idea that what he invented would eventually change the world. The advancement of telephones has impacted the growth in the telecommunication field and has helped people around the world stay connected. Before this technology was invented, it was very difficult for people to maintain long distance friendships/relationships.

Don't use plagiarized sources. Get your custom essay on
“ What if the telephone was never invented? ”
Get custom paper
NEW! smart matching with writer

Most communication occurred through letters and telegraphs. Can you imagine not being able to hear the voice of loved ones for long periods of time? On March 10, 1876 the first initial speech was transmitted by Alexander Graham Bell by using electricity. Even though it did not instantly revolutionize the world, it started a course that would change the future of communication.

This occurred when Bell was doing experiments with electrical signals in order to try and improve the telegraph.

At this time, the telegraph was the most established means of communication. A telegraph message included dot-and-dash (Morse code) and was restricted to receiving and sending only one message at a time. Initially, Bell wanted to discover a way to send multiple messages at once. Later, Bell recognized the potential of his idea he spoke with his future father-in-law, an attorney, to seek financing on the project. His father-in-law liked the idea of a multiple telegraph and reached out to Western Union Telegraph Company to finance the project.

Bell continued with his research on the multiple telegraph, but then evolved his idea into developing a device that would transmit speech electronically. Once Bell was able to transmit messages, he began conducting demonstrations of his public telephone on the road. He did this in order raise awareness and look for people to help finance the project. Popularity of the telephone grew exponentially in the following 10 years; in June of 1880 there were 287 phones established, by July there were 750.

Eventually, in 1890 167,000 phones were installed. In the 1880’s, this telephone contained a “switchboard” to help people communicate. This method had no dialing, no signaling system, and no electronic switches. To use the phone, callers would have to crank a handle to get an operator to connect their calls. The switchboard had no ring tone or alert and there wasn’t any privacy because the operator was always on the line. Then, in 1885, AT&T incorporated this switchboard technology in order to lease phones to homes and offices but maintained ownership of the technology. AT&T then launched the Model 500 telephone. This phone had a ringer, handset, and adjustable volume control. It had a rotary dial and an automatic switchboard. This phone was leased on a monthly basis to customers and created a monopoly that earned AT&T millions of dollars. This was just the beginning of the effects this advancement would have on the world. The telephone made people safer when 911 was developed.

The first 911 call was made on February 16, 1968 in Haleyville, Alabama. Congress passed a legislation that allowed a distinct phone number for citizens to use to report fires and medical emergencies. They chose the numbers “911” because they were easy to remember and did not include three digits already in use in a U.S. or Canadian area code. The telephone made it convenient to communicate and it also protected people. The telephone also had a negative impact on people lives. People began using the phone as the primary form of communication. So although the telephone was thought to improve communication, it actually reduced the amount of verbal communication (face-to-face) and people began to see each other less often, since they can talk to each other from a distance.

Another notable advancement that revolutionized the world was the invention of the cell phone. In 1973 Martin Cooper, of Motorola, made the first call from a portable cell phone. Cooper then began making efforts to bring the portable cell phone to market. The 16-ounce “DynaTAC” phone came into commercial service in 1983, with each phone costing the consumer $3,500. The major difference between the current telephone and a cell phone was that cell phones were able to make mobile telephone calls across a wide geographic area. It did this by connecting to a cellular network provided by a mobile network provider. Cell phones improved many aspects of people’s lives. Cell phones allowed for better business practices because it was easier to contact people outside of their house and work place. Cell phones also improved the safely of people. People could dial 911 from their location in case of a car accident, attack, robbery, or other occurrence that could arise in public.

Cell phones also made it easier for people to seek employment because it was easier to contact candidates directly. It also made it easier for prospective candidates to contact the employers directly, too. But the biggest impact that cell phones would have on society was people’s social lives. Cell phones made it easier to contact people when they were out and about, gather a group together, and share gossip. In present day, the most popular form of communication is now “texting”. Text messages are typed messages on a cell phone that go back and forth between two cell phone users. Text messages are more convenient then talking on the phone because you are able to text multiple cell phone users at once, send photos, it is more discrete then talking on the phone, and people are also able to multi-task with other activities while still communicating. The evolution of the telephone had many important occurrences that impacted the growth of telecommunications.

In 1984, AT&T was forced to break up their monopoly they had on local telephone usage. In turn, approximately 6000 independent phone companies opened up shop and where known as the “Baby Bells”. This breakup also allowed users to own their phones and hook up their own devices to them. So this created more jobs in the telecommunication field and allowed entrepreneurs to profit from the field. Also, there were many other technological discoveries that were made that went hand-in-hand with the telephone. The fax machine is one of the most widely used technologies that is used to send documents. Fax machines use telephone lines to broadcast digital signals to a modem on the receiving in which decodes the signals into messages. This allows people to send documents more efficiently.

This particularly helps business send important documents such as payrolls, H.R documents, and product order forms. Can you imagine being a business owner and having to wait for the mail to deliver these documents? Then the evolution of cell phones changed the professional, social, and personal lives of the world. Cell phones, in current times, do a great deal more than just allow for conversation. Cell phones allow access to the Internet, email, business applications, pictures, music, calendars, social networking, and much more. This makes it easier for cell phone users to store contacts and important information. The advancement of telephones has impacted the growth in the telecommunication field and has helped people around the world stay connected.

The telephone was the first initial communication to allow us to maintain relationships over long distances. Because of this technological discovery, our society and the world changed. Anywhere you go, you will always see people talking on their phones, texting on their phones, surfing the internet, or playing games. It is easy to take technology, inventions, and advances in any field for granted. When the telephone was launch it encountered many endeavors with technical problems and restraints. In present time, the telephone has become so accepted that almost everyone in the western world has a telephone. The telephone has proved to increase revenue, employment, and improve communication.

Topic of Research Paper: Evolution of the Telephone

What if the telephone was never invented?. (2016, Oct 11). Retrieved from https://studymoose.com/what-if-the-telephone-was-never-invented-essay 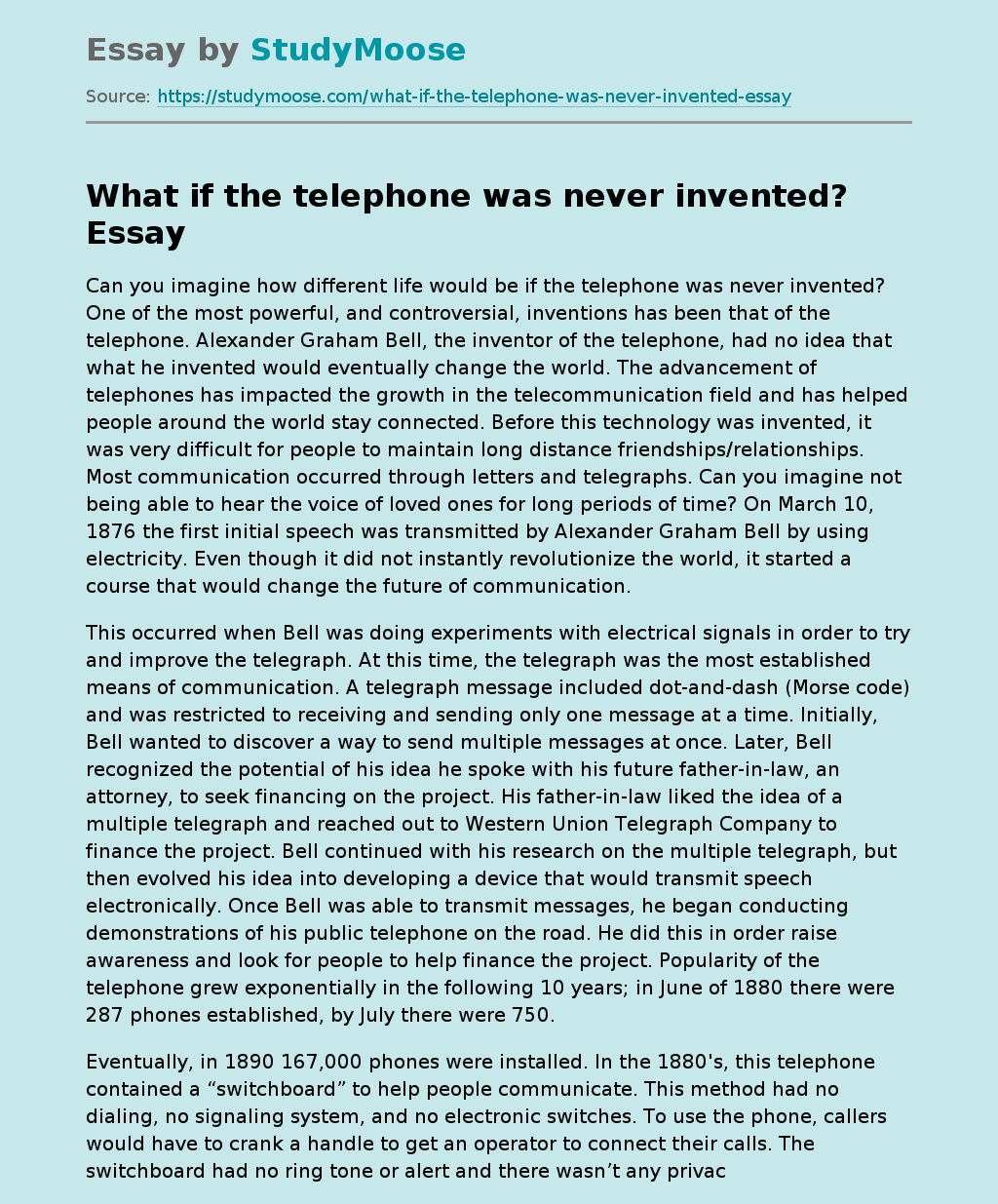