Never Too Late To Learn

There’s an old saying: You can’t teach an old dog new tricks. Well, most of the time, whenever I’ve heard it, the one saying it has been an older person who’s trying to explain why they can’t, or rather, won’t learn something new. However, I learned a long time ago that you never stop learning, and it’s never too late to learn something new. You just have to want to learn. This lesson was taught to me by my great-grandmother, and, ironically, she taught it to me when I was very young.

Don't use plagiarized sources. Get your custom essay on
“ Never Too Late To Learn ”
Get custom paper
NEW! smart matching with writer

My great-grandmother, Marian, was a fairly small woman, only a little over five feet tall. Of German ancestry, she had blue eyes and, when she was young, blonde hair that she allowed to grow so long she was able to sit on it. By the time I was born, she was an old woman, and her long blonde hair had become grey, and been cut to shoulder length.

Her personality, however, was what a person noticed about her whenever she was present, rather than her physical appearance. She wasn’t forceful or domineering, but simply had a way about her that people couldn’t help but notice.

She was a teacher during World War I, when she met my great-grandfather, but she was teaching with temporary credentials, handed out due to a shortage of teachers during the war. It was a job that she truly loved, but once the war ended, the temporary credentials expired, and, thanks to the return of the men and women who had served in the war, her services as a teacher were no longer needed.

She married my great-grandfather and became a housewife, living in Wharton, Texas.

Even though she didn’t have a typical job, she earned money a variety of ways. She sewed and designed original clothing, sold cakes and candies via mail-order, and took census of the area for the U.S. government’s official count. After raising two children, she decided to go back to a more traditional job. The way she had been dismissed after World War I had slightly soured her on teaching, so instead of returning to that, she ended up becoming a licensed vocational nurse. Because her husband worked odd hours, she decided to take courses at Wharton County Junior College, in order to get herself out of the house and to keep from disturbing her husband while he tried to sleep. She was also truly interested in learning what the college had to teach.

She had worked as a nurse for several years, and taken quite a few courses at the junior college, when she decided to quit her job. Her intention was to move from Texas to Florida, to assist her daughter, who was expecting her third child. Unfortunately for my great-grandmother, she didn’t ask her daughter about this idea before quitting her job. My great-aunt had already made arrangements and did not need or want her mother’s assistance. The clinic found a replacement nurse almost immediately, and so my great-grandmother found herself without a job and uncertain as to what to do with herself.

About this same time, Mr. Hodges, the president of Wharton County Junior College, called my great-grandmother into his office to discuss her degree plan with her. Marian had taken nearly every course the junior college offered, except for the automotive courses. When Mr. Hodges pointed this out to her, she said, “Well, I’d have taken those, too, except they’re not at convenient times for me.”

Mr. Hodges suggested she take all of those hours and do something constructive with them, so, after some discussion, she decided to become a teacher again. She received her Associates Degree from Wharton County Junior College, and went on to receive her teaching certification. By the time she was qualified to teach, she was in her late fifties. She obtained a teaching job in Hungerford, near Wharton, and taught there for a number of years. She eventually retired, officially, at the age of 70. She only retired then because her doctor insisted that it was time, for her husband’s sake, if not for her own. My great-grandfather was already beginning to show signs of his illness, and wouldn’t take care of himself properly if my great-grandmother wasn’t at home with him.

I lived with her for a little over a year, until I was ready to enter the first grade. Being a teacher for so many years, she naturally began to teach me things. She taught me how to read and write. She taught me other practical things, such as how to weed a vegetable garden, how to use a hoe, and how to tell which snakes were venomous and therefore to be avoided, but she also taught me how to use my imagination. She would read a story to me each night before we went to sleep, but just reading was never enough. She would ask me questions about the parts of the story that weren’t actually described. If a scene was left out, she wanted me to make up that scene, to fill in the blanks. She wanted to know what I thought the physical location of the scene might look like, as well as what people might be saying or doing during the missing scene. If something was described in the story, but without enough detail to suit her, she had me add the additional information.

When she read the classic tale, Treasure Island, to me, she would have me fill in details of what people looked like, such as the clothing they wore and the color of their hair and eyes. She would also have me give a better description of the locations surrounding the characters, such as the Admiral Benbow Inn and the sailing ship, the Hispaniola. When time passed in the book by simply commenting that weeks had passed, my great-grandmother would ask me to tell her what I thought might have happened during those weeks. Every book she read to me was read like this.

She made sure that stories weren’t just words on paper, but windows into other people’s lives. Sometimes they were doors into other worlds, other realities, but they were never just words. With her help, I could actually see the scenes described in the books we read, and hear the conversations taking place. She made the stories come alive. No matter how fanciful or fantastic the world described in the book might be, the way we read the stories made it seem as though the people and places might actually be real.

Some of what she taught me was academic, such as when she taught me to read and write, but I learned much from her life. These things were less defined, such as a love of knowledge and learning. She taught me to question things that many people took for granted, such as where things came from, and why certain situations were accepted as normal and others were not. She wanted me to question things like racism and prejudice. She also didn’t mind if I asked questions like why a banana was called a “banana.” Even if she didn’t know the answer, I was asking questions, and that was what she wanted.

The year that I lived with her was 1976, an election year. Even though I was only five years old, she had me watch everything about the election that was televised. The presidential candidates were Jimmy Carter and Gerald Ford, as well as Eugene McCarthy, who ran as an independent that year. She would ask me what I thought about the candidates, their platforms, and their performances during the televised debates. She took care to explain to me the relevant issues and to make sure that I actually understood what was going on. Her belief was that a person is never too old, or too young, to learn, and that if you aren’t exposed to something, you can’t learn about it. This belief is why she involved a five-year-old in politics.

The most precious gift that she gave me was how to use my imagination, and the knowledge that one is never too old to dream. To this day, whenever I read a book, I get lost in the world that the words, combined with my imagination, create. I am going back to school because I want to learn more about Japan, a country that is on the opposite side of the world, in the hopes that I might be able to go there someday. I would not be doing this, if it were not for the lessons that my great-grandmother taught me, long ago.

In the process of learning about what I came to school to study, I’m finding a wealth of knowledge that I didn’t expect. I am finding out things about myself, such as the fact that I’m actually good at math, if I study, and that I truly enjoy the process of learning. I’m also finding out things about the people in my life, those who will support and encourage me to try something challenging and those that will try to discourage me. In addition to this, I’m meeting new people and making new friends, and learning more about people and the world through these new friends. This, too, is part of what my great-grandmother taught. You are always learning something new, often when you least expect it. You just have to be open to the experience, and be willing to learn. I don’t know much about teaching dogs, but you can always teach a person a new trick.

Never Too Late To Learn. (2016, Aug 18). Retrieved from https://studymoose.com/never-too-late-to-learn-essay 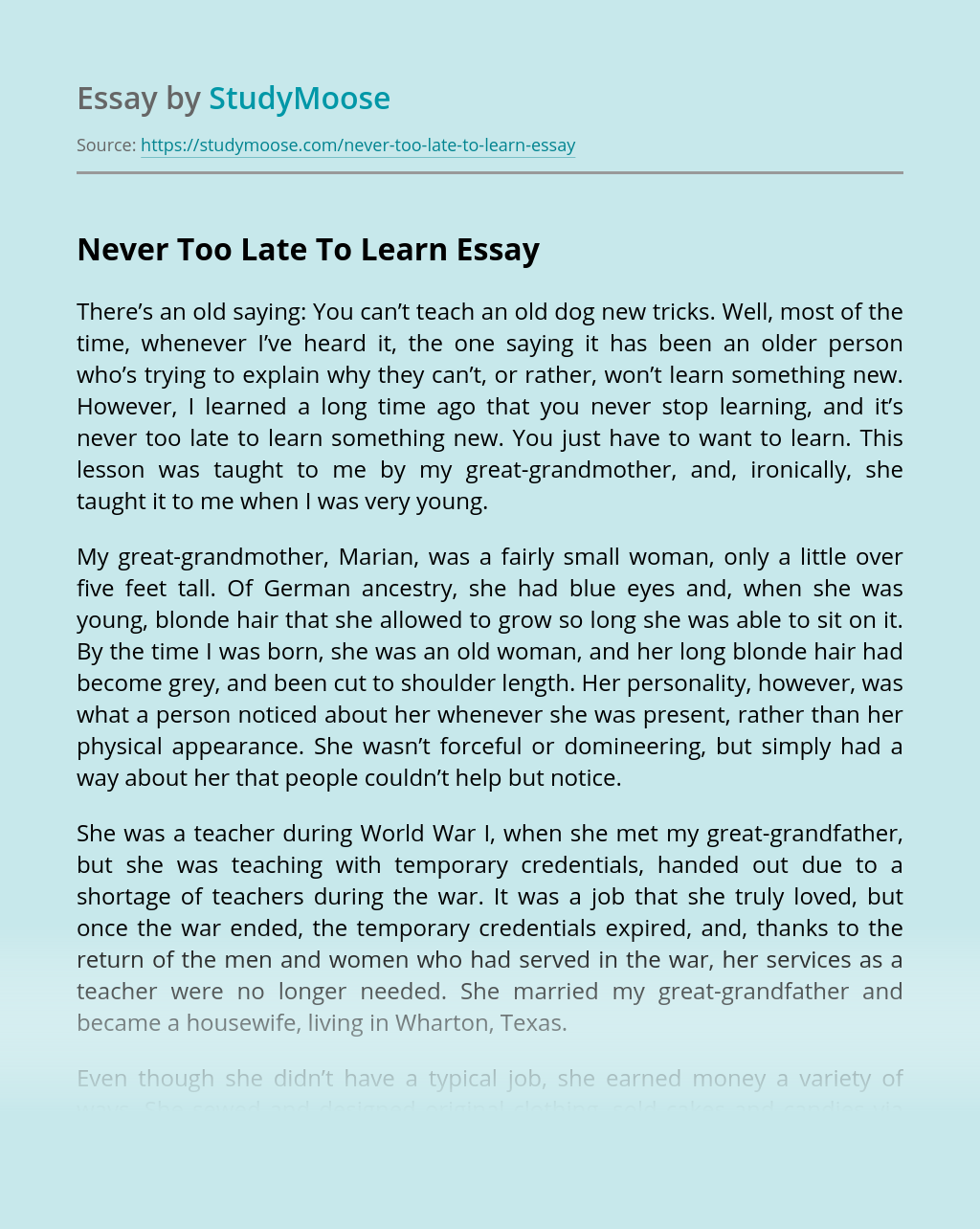