The causes of late marriage in Hong Kong

Late marriage is a serious problem, it may pose a health risk to both mother and children, may develop a generation gap and cause the problem of aging. There is an arising trend of late marriage for both male and female in Hong Kong. The median age at first marriage for males was 31.2 and that for females was 28.9 (Census and Statistics Department, 2012).They were higher than the parallel data 35 years ago. The two causes of the increase of late marriage are the growth of liberalism and lack of confidence about marriage.

Turn in your highest-quality paper
Get a qualified writer to help you with
“ The causes of late marriage in Hong Kong ”
Get high-quality paper
NEW! AI matching with writer

To begin with, the growth of liberalism is one of the reason causing late marriage. The Revolution of 1911 ended the dynastic system, liberal constitutionalism rose to political ascendency for the first and what was to be the last time on the Chinese mainland. (Chinese liberalism, 2010). In days gone by, parents used to plan the marriage for their children when they reach suitable age to get married. Children were forced to get married although they have never seen their consort before.

However, the widespread of liberalism changes the situation. These days, people think they have freedom to choose when and who to marry, or even not to marry. Their marriage are no longer decided by others . Liberalism change peoples’ mind thus causing late marriage.

In 2006, the crude divorce rate was 2.5 per 1 000 population as compared with 0.4 in 1981. ( Census and Statistics Department, 2007) High rate of divorce cause people to contemplate before getting married. Men and women think they need more time to understand each other better. They also consider people with older age are more sophisticated and have a more mature mind. Therefore lack of confidence about marriage as the divorce rate is high is the reason for the rise of age of marriage.

By and large, the two reasons cause late marriage are the growth of liberalism and inadequate confidence about marriage.

The causes of late marriage in Hong Kong. (2016, Jun 02). Retrieved from https://studymoose.com/the-causes-of-late-marriage-in-hong-kong-essay 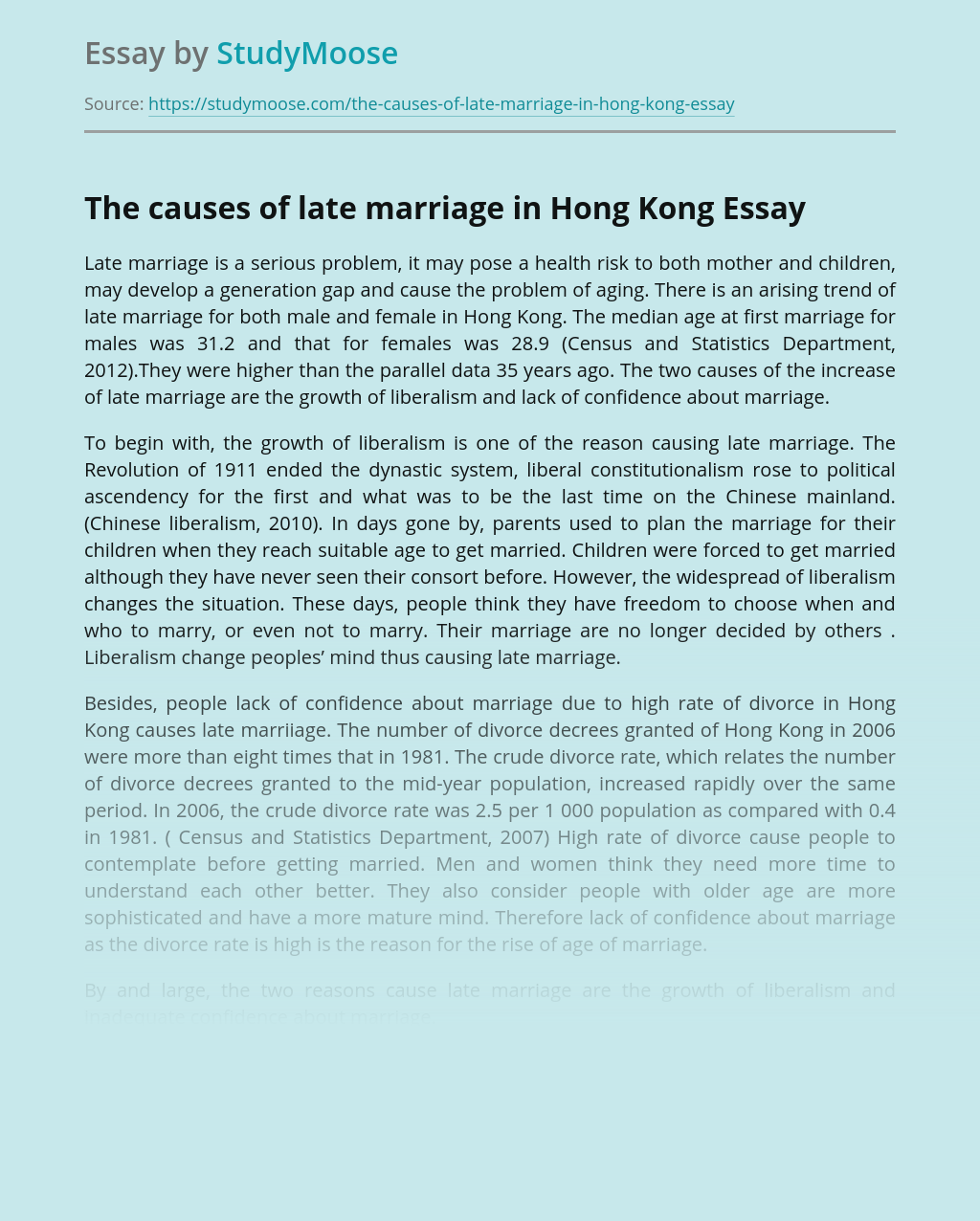 Turn in your highest-quality paper
Get a qualified writer to help you with
“ The causes of late marriage in Hong Kong ”
Get high-quality paper
Helping students since 2015
Stay Safe, Stay Original