The magical enchantment of Disneyland appears to wear off easily on the Asian tourism market. After two years from its grandiose foray into the Asia, the brain box of Hong Kong Disneyland is rethinking its strategies and programs into meeting the dwindling sales and visitors receipts that the theme park is recently encountering. According to a report by the International Herald Tribune, the theme park drew 5. 2 visitors in its maiden year and 4.

8 million tourists in the second year. Expected revenues and receipts continue to dip in the past few months spurring other concerns such as a possible restructuring of the project’s loan and the feasibility of opening a similar attraction right in the heart of mainland China.

Don't use plagiarized sources. Get your custom essay on
“ Case Analysis of Hong Kong Disneyland ”
Get custom paper
NEW! smart matching with writer

Such figures continue to disappoint the theme park’s investors as well as some market analysts as Walt Disney’s magical kingdom is unable to exploit the monstrous Chinese market right next door.

In the wake of these developments, this research is proposed for the purpose of gathering data on the recent performance of the embattled theme park and possibly through analysis, be able to pinpoint proximate causes as to why this heavily-invested tourist attraction has not been performing up to par.

This will entail acquisition of direct data from the subject market as well as identifying key issues that must be addressed by corresponding authorities of Hong Kong Disneyland. Since the data intended to be utilized is relatively direct and current, most of the possible source will be through surveys and online references.

This research will be conducted with an investigative frame of mind to discover the immediate and proximate causes on the decline on tourist arrivals on this globally-loved theme park and its translation in the loss of revenues and tourist receipts and if through such research, data may be interpreted to formulate possible policies and propositions to effective abate the loss of attractiveness and novelty of this unique and relatively-new tourist attraction.

The primary aim of this research will be to investigate why Hong Kong Disneyland has to struggle to meet their visitor target in the year of 2006 and 2007. The aim of this paper will be best served pursuant to the following objectives, namely:

In order to limit the scope of this research and taking into consideration the complexity of the matters and data that may be gathered and discussed, identification of the key issues and text must be made that would facilitate a more structured and focused presentation of the investigation. This will translate into a better appreciation of the paper’s primary aim and will better address the aforementioned objectives.

Based on findings and preliminary consideration of facts and data, the following constitute the key issues that this paper must address: 1. A more acceptable definition of the Chinese traveler Hong Kong Disneyland, being the smallest among the more established franchises of the magical kingdom, stands at the threshold of invading the enormous Chinese market as well as the rest of Asia with its western-based form of entertainment.

There may be question on the incompatibility of the attraction to the type of tourists targeted since the Chinese market has only recently been exposed to these types of entertainment. Apparently another Disney attraction, the Tokyo Disneyland is also slowly coming out of its own declining attendance dilemma experienced in the recent months of its almost 25-year existence; a factor attributable to the new breed of Asian travelers.

The Japan-based theme park is now facing an ageing target audience that led to the declining numbers in gate attendance. Since Hong Kong Disneyland is based in China, it seems strange that the theme park is not getting its share of the tourism pie despite the rapid growth of the Chinese tourism industry. In fact, the number of Chinese tourist reached a record high last year when it recorded more than 30 million outbound travels last year . And during the first quarter of 2007, the figure went up by 14.

5% as against that of last year. According to the vice chairman of the Chinese Tourism, this undeniable growth in travel behavior of the Chinese has made them one of the more dependable sources of visitors in Asia. Thus, it would be imperative for this research to have at least a working definition and understanding of the Chinese travel behavior and patterns since this group comprises the majority of the expected visitors of this billion dollar facility.

The better analysis of the target market would provide inside on possible causes why Hong Kong Disneyland has been losing its luster to attract visitors. 2. The receptiveness of the Hong Kong community In reference to the declining visitor numbers, Walt Disney Parks and Resorts chief Jay Rasulo said the beleaguered theme park “is developing a little more slowly than we expected in 1999 when the deal was put together. ” This is in the wake of an upsurge in outbound tourism by the Chinese.

It would be prudent for this paper to go into a comprehensive discussion as to how a tourism attraction like Hong Kong Disneyland was received by its immediate community and how its has affected the former British colony’s social and economic landscape. The disappointing drop in attendance would not be the first debacle by the organization in China. In 1999, the animated Disney film classic Mulan unexpectedly flopped in the Chinese box offices attributing its misfortune to the extremely westernized take of the film. 3. Hong Kong Disneyland as viable tourism product for China

Taking a page off from the 25-year success of Tokyo Disneyland, the Walt Disney team looked further east and found unchartered territory in the great expanse of China and its budding tourism sector. In China they found a billion dollar prospect in an Asian economy hungry for western goodies and to temper the impact that another Disneyland would make, they decided to first pitch tent in a more western-friendly island of Lantau; home to the former British colony of Hong Kong in an effort to test the waters before they bring Walt Disney’s magic straight to Shanghai. 4.

Sustainability of theme park operations in China Having recently endured the stigma of the epidemic SARS, Hong Kong’s tourism industry showed resiliency and made a recovery during 2004 when visitor arrivals hit more than 17 million . As one of its economic pillars, it has continued to advance in the sectors of transportation and accommodation, making the business environment ripe for the area of tourism investment like Hong Kong Disneyland. Most of the visitors of this island originate from the mainland either by train or by boat, or through reservations via travel agencies in China.

So strong is the support of Hong Kong officials to tourism promotion that in 2003 and 2004, they launched a successful “We Love Hong Kong” campaign in which was followed by the catchy slogan “Live It, Love It”. During this period, both locals and incoming tourists are allowed to experience the distinctive fusion of East and West culture as well as to discover a diversified and sophisticated Hong Kong. Being one of Hong Kong’s economic pillars, the tourism sector registered an 8.

1% year-on-year rise in tourist arrivals in 2006 with visitors from the Chinese mainland pegged at 8. 4% while those from other parts of the world accounted for 7. 8%. More than half of the total arrivals (54%) are Chinese mainlanders, reaching 13. 6 million where majority traveled individually. The next year saw a 6. 6% year-on-year increase with tourist arrivals at 6. 6 million. Unless Disney re-evaluates its position, it will be hard-pressed to sell American-type of amusement to a market deeply-rooted in oriental culture.

According to one media and entertainment specialist, Disney cannot impose “American will–or Disney’s version of it–on another continent. ” Thus, the company is compelled to adapt unconventional ways of wooing its audience. Another issue that may influence the outcome of this research is the accuracy and completeness of records and data that will be acquired from official sources. Also, since the primary data the will comprise this paper will be conducted through survey, the comprehension and truthfulness of the respondent to the survey questions will also be a factor. 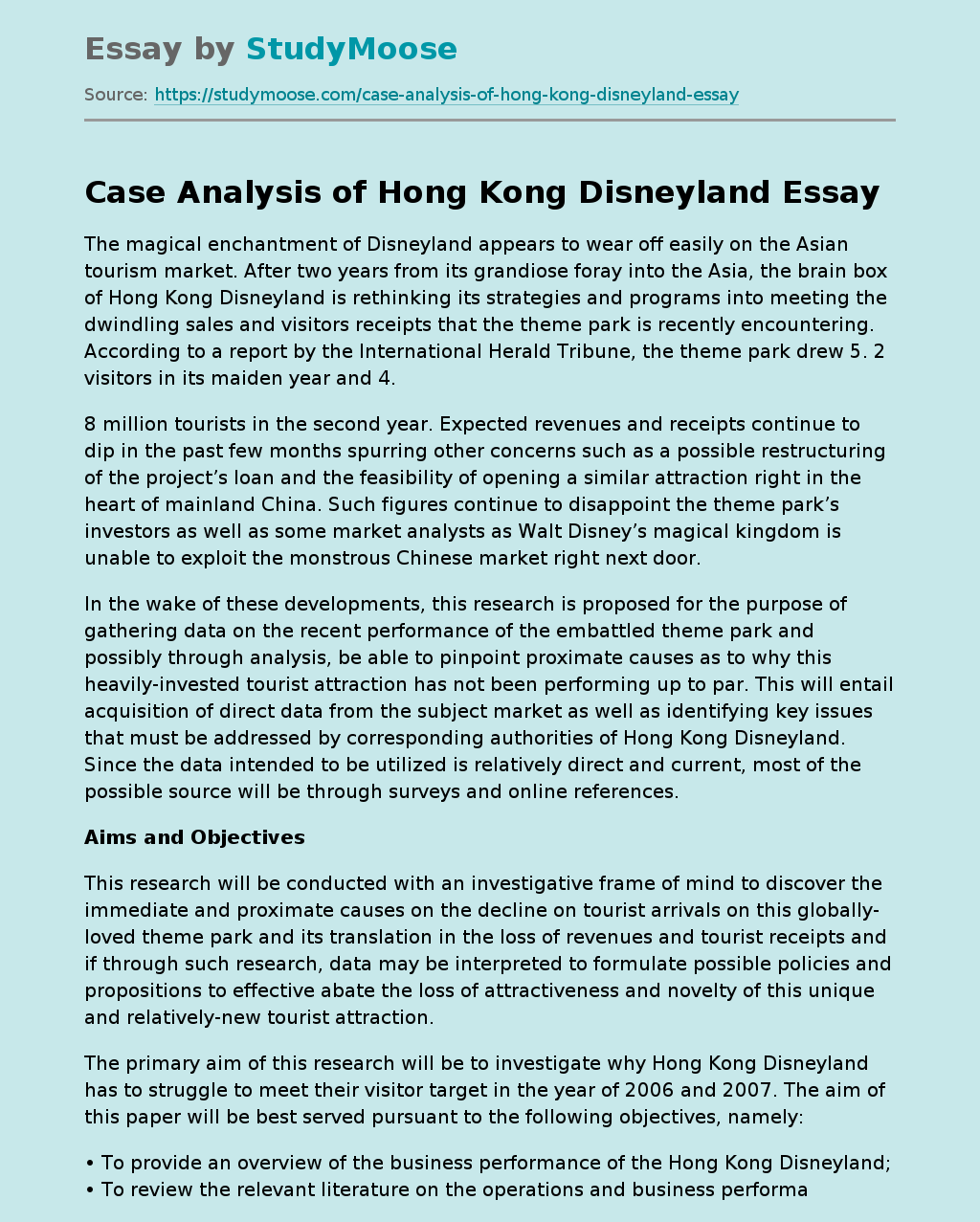