Defendant – Hong Kong Island Development Limited (Owner of shopping mall and two plaintiffs are the owners of retail shops) In 1996, after conference, the plaintiffs brought an action against the defendant for breach of an agreement to grant them a tenancy at the defendant’s shopping mall. The defendant and plaintiffs reach a verbal agreement, such as monthly rent, management pre-pay HKD$ 200,000 for beginning deposit.

In Feb-Jul 1997, they circulated the letter of intent by a formal agreement, recommended the lease, right of renewal, rent-free period and the draft lease agreement, etc. Moreover each side have letter conversation to consider the possibility of formulate a new agreement, unfortunately they didn’t achieve.

In 5 July 1997, defendant let plaintiffs enter and manage that site, so the contractors can start the fitting-out works. All plain had published the advertisements to hire the food, beverage contractors and employees.

In 29 July 1997, plaintiffs know that defendant opposition to build a food court in shopping mall, and intend to establish a “medium and high grade restaurant with comprehensive services”. At that time, plaintiffs already pay a lot of money to decorate the site. They want defendant return the deposit and to make damages, plaintiffs claim that both sides already make agreement from all provision.

A verbal contract with intent and immediate binding, established on 27 January 1997, when plaintiffs pre-pay the deposit. Therefore, defendant’s actions will results as a breach of contract.

Contrary, defendant advance that deposit has to confiscate, and the important term still in discussion level (beginning date, length of rent-free period, pay rent of exercise of the right of renewal). The defendant argued that before signing contract, all related discuss and achieve agreement will subject to contract.

(A) Relation to a Lease & the Intention with Essential Terms

In this case, we know that all of the contract must contain four essential elements: “Offer”, “Acceptance”, “Consideration” and “The intention to contract”.

What the parties have said – After a series of meetings beginning in Sept 1996, the parties orally reached agreement on certain aspects of the proposed tenancy.

What the parties have put down in writing – Between 1st Feb and 4 th Jul 1997, terms of tenancy including a draft letter of intent and a draft tenancy agreement passed between the parties. Neither of those two documents was executed.

How the parties have behaved – More than one negotiations after a series of meeting, and the 2nd plaintiff issued a cheque for an initial deposit HKD$200,000 to defendant.

And referring to the minimum terms as the “cardinal points of the contract”, those required by the parties to be included the “essential terms”. “Essential terms” is a necessary part of the plaintiffs’ case to show the two parties had come to a final and complete agreement for. If not, there was no contract. They are only in negotiation either party may retreat. And though the parties may have agreed all the cardinal points of the intended contract. If same particulars essential to the agreement still remain to be settled afterwards, there was no contract too. The parties in such a case, are still only in negotiation.

Before the trial judge, plaintiffs and defendant was considerable to whether the parties had agreed the “essential terms” used in a technical sense that expression usually understood to the minimum terms which must be agreed before there can be a concluded agreement for any lease.

Minimum terms dealing with (1) identify of the parties, (2) the premises to be leased, (3) the commencement and duration oh the term; and (4) the rent or other consideration to be paid.

(B) Non-decisive factors in proving the existence of a contract

According applicable principles and accurately focused, the contract intended binding was orally concluded with HKD$ 200,000 deposit, with subsequent negotiations merely confirming or fine-turning the agreement not affecting the concluded contract.

Count of Final Appeal think deposit and the possession for fitting out works are classified as carry out. It was still assume there have a treaty contract.. Also, it can proof the contract is existence. Although above action and treaty contract are no conflict, parties and defendant trust it will binding. It was under law restriction. However, the action is not right. So, they pay deposit and possession for fitting out works is not definite action. It was not proof there have any contract.

(C)Test for Ascertaining
In this case, it is plain that whether the parties intended to enter into a concluded contract is a matter to be looked at objectively (as noted, for instance, in Kwan Siu Man v Yaacov Ozer. However, due to unusual circumstance of both protagonists in the negotiations have been called by the plaintiffs, Court of Appeal may given undue weight to what they said were their subjective intentions as telling against the defendant’s case. Thus Cheung JA states: “The evidence of Mr. Siu and Mr. Mak showed that they had never proceeded on the basis that their agreement was ‘subject to contract’. It was a unilateral addition imposed by the leasing department of the defendant in a standard document. In fact Mr. Mak expressly disowned any notion that the agreement was subject to contract.” The test for ascertaining whether the parties intended to enter into a concluded contact is “Subject to contract”. It usually appears on top of letters or on documents exchanged by parties in the process of negotiation for a contract or agreement. It means nothing in the letter should be treated as arising in any agreement between the sender and recipient.

A contract will be executed after the negotiation process and if the contents of the letters were to form part of the contract, it should be expressly stated in the contract. They denote that document is not an offer or acceptance and negotiations are ongoing. Often the expression without prejudice is used when subject to contract is meant.

In this case, the terms that still said to be under negotiation are “Subject to Contract”, “rent-free period”, and “renewal period”.

For agreements that are formed subject to contract, it caused by the parties have reached finality in arranging all terms and intend to be immediately bound to perform those terms, at the same time propose to have the terms restated in a form which will be fuller or more precise but not different in effect. The parties intend to be bound immediately thus contract is formed.

And the parties completely agreed upon all terms and intend no departure from or additions to those terms, but have made performance of one or more of those terms conditional upon the execution of a formal document. An offer in such a case is not expressed to be subject or conditional upon a formal execution of contract and all essential terms have been agreed upon thus contract is formed.

Likewise, the pleaded case on renewal option was also equivocal. Both letter of intent and the draft tenancy agreement (which also inconsistent with the plaintiffs’ evidence in relation to tenancy terms) said nothing about the 15% cap on any rent increase. If there was a concluded contract in Jan and if plaintiffs had complained to defendant that the letter of intent did not reflect their agreement, it was hard to explain why none of these mentioned in a subsequent letter on 9 July 1997, which also claimed no entitlement to such term nor did it mention the 15% cap on rent increase. There was ample justification for rejecting the plaintiffs’ evidence. The judge fully entitled to prefer the contemporaneous documents as true indication of the parties’ respective positions on renewal option.

(E)Significance of the use of “Subject to contract”

In this case, “Subject to contract” is significance to affect the judgment. “Subject to contact” in a commercial context, normally a presumption that the relevant intention to create binding legal relations existed where the other elements of a contract exist. Also often used to show the parties are still negotiating a contract.

In evidence Judge are fully find out there was no concluded contract, just a “Subject to contract” .Because final agreement had not been reached as to the commencement date, the rent free period and the renewal option , all being matters which the parties hand plainly intended to be regulated by their contract. For instance, Mr Mak caused to be sent to 2nd plaintiff upon receipt of deposit contained a standard clause stipulating that the terms were offered “subject to formal lease”. Defendant evidently adopting its usual stance of conducting negotiations subject to contract. And plaintiffs’ own letter of 15 July 1997 was marked “subject to contract”.

Such absence of agreement is fatal to the plaintiffs’ claim or finally cannot brought an action against defendant for breach of agreement. Due to there are no any agreement or concluded contract between the parties.

According to the judgment, the judge rejected the claim right from defendant to forfeit the deposit HKD$ 200,000 because there was no concluded agreement made between plaintiffs and defendant, it means that there is no tenancy agreement was signed. The deposit should not be forfeited. Also the judge quoted the case of “Guinness Mahon Ltd v Kensington and Chelsea LBC “and ” Chillingworth v Esche ” and stated that ” where a supposed contract is void or expected contract never concluded, no enforceable obligation is ever created but the context of a supposed or expected contract is still relevant as explaining what the parties are about. An advance payment made is such circumstances is not a gift and is not to be treated as a gift.”

The evidence of the parties differed as to what, if anything had been agreed regarding commencement of lease. It was for the judge to assess the witnesses’ testimony against documentary evidence. The inference to be drawn by reading the letter of intent, which questions to whether the parties were at that stage as to the proposed tenancy terms, was that the commencement date was not firm but tentative. The 7-day notice requirement also militate against any finding that a firm commencement date had been agreed. 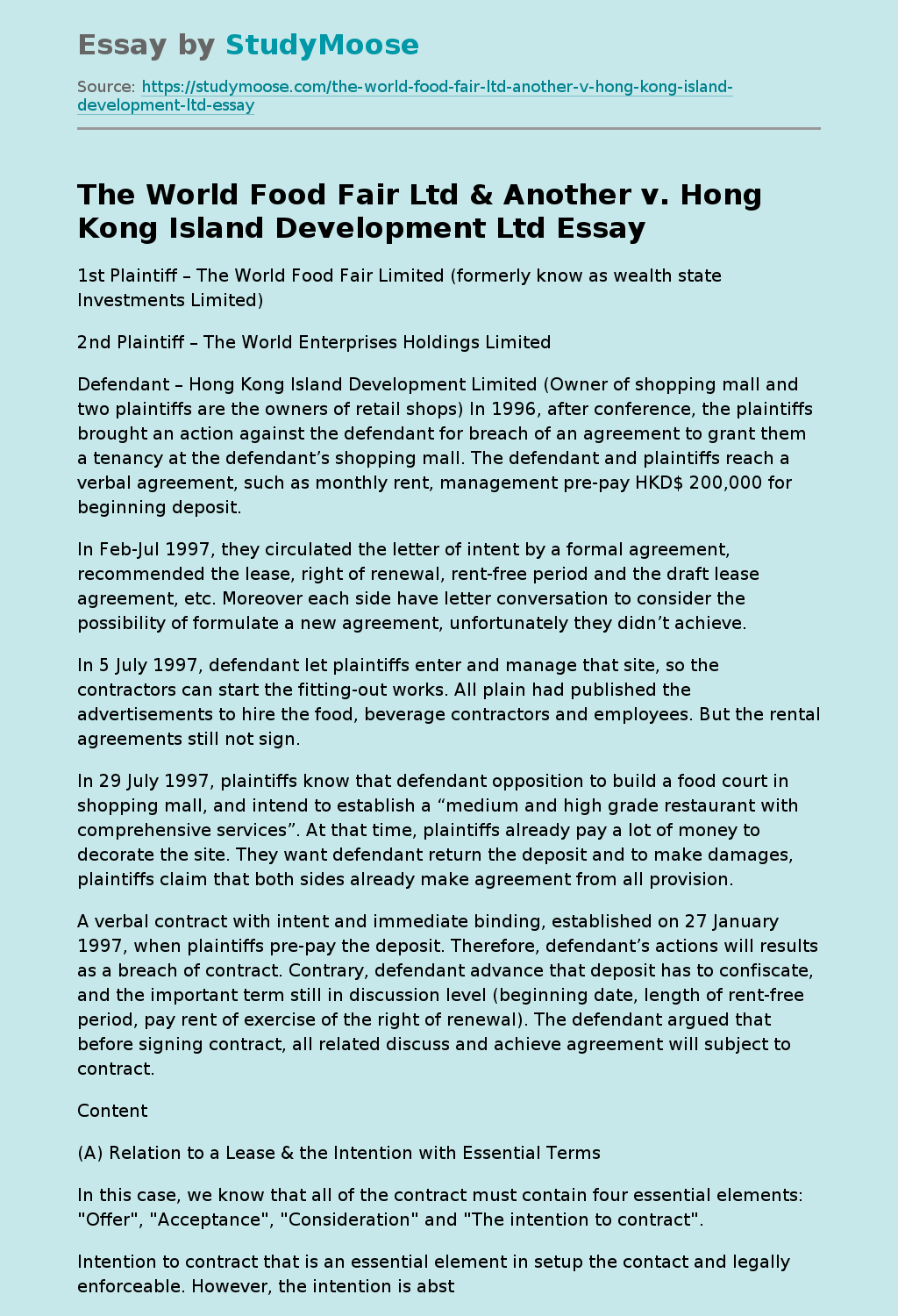