The purpose of this project is to develop an international marketing plan for Hong Kong Airlines to broaden to the India market.

The very first part of the job will cover the current marketing mix and techniques of Hong Kong Airlines, along with the SWOT analysis. The 2nd
part will analyze the India market and explore the feasibility for Hong Kong Airlines to enter this market as a low-priced carrier, or typically referred to as a budget airline. It will be followed by some foreseeable difficulties, with the relevant remedial measures.

This area will illustrate the present marketing mix of Hong Kong Airlines.

Product/Service
Hong Kong Airlines is a full service provider which supplies both scheduled regional flights and freight services within the Asia-pacific Region.

Price
The airfare for Hong Kong Airlines is reasonably lower than that of its competitors such as Cathay Pacific and Dragonair.

It utilizes the bauhinia flower, the emblem of Hong Kong, as its logo design.

Individuals
Hong Kong Airlines stresses that their personnel are young and energetic. It is expected that the size of workers will reach 2,600 in the near future.

Physical Evidence
Since February 2013, Hong Kong Airlines’ fleet includes 25 aircrafts with a typical age of 3.9 years. This is relatively brand-new when comparing to other airlines.

Public Relations
Hong Kong Airlines highly involves in charity projects and sponsorship events. For example, it has launched the fund raising programme, Fly & Care, which aims to subsidy athletes for preparing the 2016 Brazil Paralympic Games. It has also received various service awards such as the Capital Weekly Service Awards in 2012.

The vertical and horizontal axes of Figure 3.2 represent price and service level respectively. Hong Kong Airlines is located at the bottom right corner because it provides reasonable service level with competitive price.

Dragonair and Tiger Airways both operate on similar routings as Hong Kong Airlines. With Dragonair positioning as a premium brand while Tiger Airways being a low-cost carrier, they are selected for a more detailed competitor analysis.

Dragonair
Dragonair is an international airline based in Hong Kong, which is a wholly owned subsidiary of the flagship carrier of Hong Kong – Cathay Pacific. It aims to offer customers enjoyable and comfortable flying experience via its full scope of services and quality cabin products.

Its customers’ demographic profile is very close to that of Hong Kong Airlines: 85% of the passengers live in Asia-pacific and 30% of them live in Hong Kong; 66% are males and their average age is 41-year-old; and the average personal monthly income is around USD5,000. They are service-sensitive and less price-conscious. More than half of the passengers are frequent travelers who fly for more than 6 times annually.

Tiger Airways operates between Singapore and some regional destinations in Southeast Asia, Australia, China and India. Their passengers are price-conscious and less service-sensitive.

Operating in a relatively small scale, Hong Kong Airlines can be flexible and responsive to the market changes.

Hong Kong Airlines is also weak in operational management. The Hong Kong Civil Aviation Department has frozen the fleet expansion plans of Hong Kong Airlines since August 2012 due to safety concerns, and advised it to consolidate the existing operations with current fleet size.

With a relatively small scale of operations, Hong Kong Airlines has a rather weak bargaining power with its suppliers of aircrafts, fuel, and aircraft maintenance services.

Opportunities
The tourism industry in Asia-pacific region is expected to expand due to the fast economic growth, and the implementation of the intra-regional policies in tourism development. Currently the intra-regional traffic constitutes around 78% of Asian tourism, with budget airlines account for 24.9% of Asia’s total passenger traffic.

The Hong Kong Tourism Board will invest around HKD30 million in opening up new visitor sources in five new markets – India, the Middle East, Russia, Vietnam and the Netherlands.

These developments in tourism will definitely increase the demand for air travel.

Threats
There are keen competitions in the aviation industry, involving both the market leaders and low-cost carriers.

One of the major operation costs for an airline is the fuel cost, which has a great impact on an airline’s profitability. If the crude oil prices return to the peak of USD70-odd or higher, some small-scale airlines, like Hong Kong Airlines, may be unable to survive.

Depreciation of Indian rupee
The Indian rupee has been depreciating and cheap air tickets are becoming more preferable for the value-conscious Indian tourists.

Increase in the popularity of low-cost carriers
The demand for cheap air tickets has made low-cost carriers more popular in India. In 2012, 37% of the Indian leisure travelers travel overseas via budget airlines.

Change in Indian aviation policy
In September 2012, the Indian government has eased the restriction by allowing foreign direct investment up to 49% in private Indian airlines.

2013-2014 Work Plan of Hong Kong Tourism Board (HKTB)
To open up new visitor sources for Hong Kong, the HKTB has been actively developing new markets, including India. The proposed marketing budget for India in 2013-2014 will be HKD13.4 million.

The above factors have illustrated a growing market for low-cost carriers in India, which is not yet fully accommodated by existing airlines. Together with the open-up policy of Indian government and the marketing plan of HKTB, it is a favorable opportunity for Hong Kong Airlines to expand its operation into India as a low-cost carrier.

[Remarks: There are rumors that Hong Kong Airlines’ sister airline, Hong Kong Express, will relaunch itself as a low-cost carrier in the near future. However, no relevant official announcement has been made by either the Hainan Group or Hong Kong Express. Regardless, this project aims to propose Hong Kong Airlines to enter India as low-cost carrier; any future development plans of other subsidiaries of the Hainan Group should be investigated separately.]

Objectives
This plan serves to relaunch Hong Kong Airlines as a low-cost carrier in India. It aims to raise public awareness of the company’s new positioning in the India market, with the ultimate goal to increase revenue.

Target Audience
This plan will target the potential customers in Mumbai and Delhi, which are the two cities containing the most outbound travel population in India – 33% and 26% respectively.

Entry Strategy
The ideal entry strategy will be cooperating with a local airline or company in the form of joint venture. It will reduce the risk of investment, and also serve to comply with the local government’s policy on foreign direct investment. However, Hong Kong Airlines needs to be very careful in choosing the right local partner as most of the local airlines are suffering from severe financial problems. Therefore, it would be preferable to resemble the capital partnership between Air Asia and the Tata Group in India.

Market Strategy
In view of the strong cultural differences between India and Hong Kong, Hong Kong Airlines will adopt a localized market strategy and compete as a market nicher amongst the existing competitors.

The table below summarizes the marketing mix which Hong Kong Airlines will adopt to enter the India market.

Price
As a low-cost carrier, the airfare will be much lower than its rivals.

Product
The scope of service will be limited – the airfare will only include the
transport service. Customers will be required to pay extra for the others, such as baggage handling, in-flight catering and entertainment.

Place
Hong Kong Airlines will set up local office in India, mainly for back-end operation but not customer-facing. Instead, it will utilize the online channels to approach the customers because there is a continuous increase in the number of internet users in India – from 5.5 million in 2000 to 100 million in 2010. People

In terms of people, the company will recruit local employees to address the cultural differences between Hong Kong and India.

Promotion
The promotions can be classified as Direct Advertising and Indirect Advertising; the former refers to advertisements that reach the public directly, while the latter includes cooperation with other organizations and companies.

For direct advertising, Hong Kong Airlines will utilize the digital marketing channels by setting up website and Facebook page specifically for India; besides having a fast growing amount of internet users, India also has the world’s third largest Facebook community. Interactive marketing activities, such as games and contests, can be introduced through these channels.

The company will conduct outdoor promotions, like billboards, to respond to the cultural characteristics of Indians – collectivism and the preference of public space.

Hong Kong Airlines will expand its membership programme, Bauhinia Miles, to India to retain customers and build a customer database for future promotions. Customers will be offered purchase discount upon accumulating certain amount of credits, through participating in the promotion events, such as referral. It is different from other customer loyalty programmes, which customers can redeem complimentary flights or lifestyle awards with
flying miles. Since Hong Kong Airlines will operate as a low-cost carrier offering low airfare, it would be difficult for the company to offer excessive complimentary awards to customers.

Since Bollywood, the Hindi-language film industry, is one of the largest film product centres worldwide, Hong Kong Airlines will cooperate with the local film production companies for product placement.

Potential Challenges
The cultural differences between India and Hong Kong may obstruct the understanding and effective communication with the potential customers. Recruitment of local employees and learning from the local partner(s) will help ease the cultural impact.

Another challenge will be the high burden on operating cost due to the high taxation on luxury in India. Travel is still being regarded as a luxury in India and the tax on jet fuel is 70% more than that in other countries. So Hong Kong Airlines needs to ensure a high passenger load factor on each flight and to strictly control other costs in order to leverage the overall operating costs.

In order to expand its business, entering the India market would be a favorable option for the company because of the various opportunities of the India market – the increase in India outbound travel, depreciation of Indian rupee, no existing direct competitors, change in Indian aviation policy, and upcoming work plan of Hong Kong Tourism Board.

In view of the market situation, the marketing plan of Hong Kong Airlines will relaunch the company as a low-cost carrier in India, targeting the two cities with most outbound travel population, in the form of joint venture. It aims to raise public awareness of the company’s new positioning in the India market, with the ultimate goal to increase revenue.

The marketing mix will be – offering low airfare; providing limited scope of services; setting up local back office and utilizing online channels; as well as recruiting local employees. A wide range of direct and indirect advertising will be adopted, which includes online marketing, outdoor promotion, membership programmes, cooperation with other organizations and companies, and product placement in films.

As if other business expansion plans, Hong Kong Airlines will face some challenges when entering the India market. The most crucial one is the cultural difference between Hong Kong and India, which can be eased by recruiting local employees and learning from the local partner. Another one would be the high tax burden induced by the Indian government, which would be remedied by leveraging the overall operating cost.

13. The development of the low cost airline industry in Asia 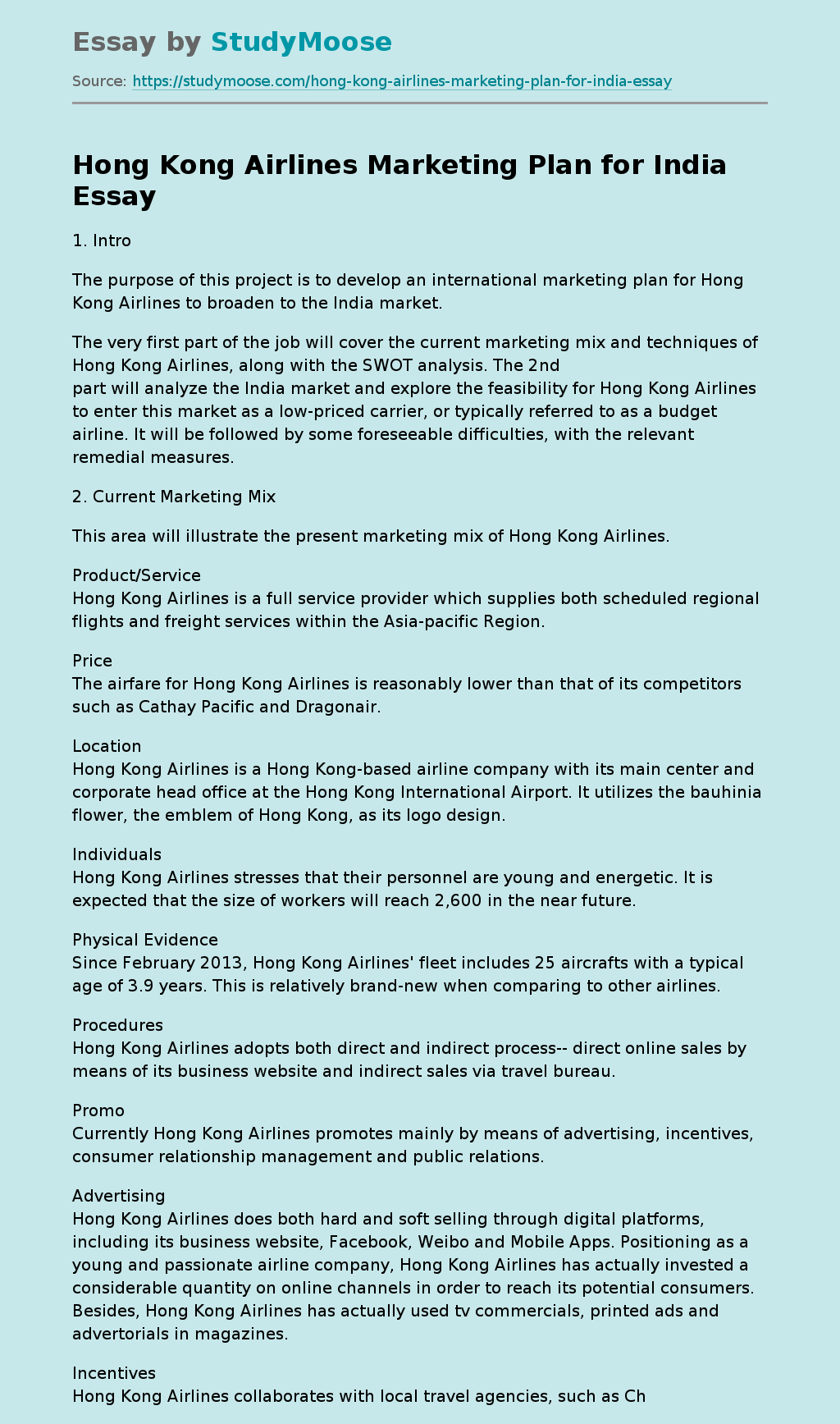