The venture into Hong Kong by Walt Disney was a simple example of a large successful western company not doing its homework. The case presents a clear picture of the importance of understanding a foreign market thoroughly before doing business there. Several factors led to an unsuccessful first year of operations and a majority of these factors could have been avoided with a better cultural understanding in the planning stages.

One of the culture differences that was obvious to Disney was the fact that the children are not familiar with the Disney characters. Disney has established its brand and is a marketing poster child in the United States, however this advantage goes out the window in a country such as china that has sheltered itself from the outside world until recently. Disney thought that making a meager attempt at introducing the characters before the launch of the park would help, however familiarity isn’t synonymous with brand attachment.

As listed in Global Marketing Management by Kotable & Helson, “Cultural Distance” is one of the six external criteria for choosing a mode of entry into a foreign territory, which was not accounted for by Disney. Cultural distance also recognizes the fact that different cultures have different expectations.

This was also the case with China. As stated in the case, “for the tourists of Mainland China, going to Hong Kong means a shopping experience, and so they choose the cheaper alternative to Hong Kong Disneyland…” The case goes on to allude to the fact that the culture in China is one about dollars and cents – when a Chinese person spends his/her money, they are more interested in what they are physically getting.

This is very culturally different from a Western vacation where relaxation and experience is the expectation. Disney does a great job at providing a magical experience, but in my opinion this is what led to their struggle in Hong Kong – the Chinese tourists do not value that very magical experience that westerners do. There were also other factors such as neglecting to do homework on how Chinese tourists select a destination. The Chinese tend to have a strong relationship with travel agents where as in the U.S a vacation is generally booked online without any personal interaction. Failing to account for these small differences coupled with the lack of brand attachment created nothing but an overpriced theme park.

All hope is not lost however! Hong Kong is a huge tourist market and there is plenty of opportunity, but the only way for Disney to rectify its market situation is to bridge the gap of cultural distance. One way to do this would be to add an educational element to their park. The case notes that the Chinese put a premium on education, and in this culture the parents are the ones making the decisions – so appeal to them and attract more people. If Disney wants to succeed it needs to also remember what made it so successful in the U.S. After year one it is clear that their brand is not established and would not do all the work for them, and must take the necessary steps to reestablish themselves all over again. It must create a magical feeling in every Chinese child hearts as well as fit the consumer expectations of their parents.

2. To what extend could Hong Kong Disneyland adapt its product to Chinese consumers without diluting its image?

Hong Kong Disney obviously requires a lot of changes in order to be successful – but at what point to these changes start impacting its brand? Being such a different culture from Disney’s main operations, China presents a challenge in that Disney is at risk of tarnishing its name if it changes its product to suit the Chinese expectations. The best way to handle this would be to introduce characters and elements of the theme park that are brand new to China, and not introduce them anywhere else. Instead of using Mickey Mouse as the brand image they can introduce something completely new – and after due time this could be successful because it is not as though the Chinese consumer has any attachment to the already established brand, as a matter of fact they are not even familiar with it. It can also change the layout of its parks.

China is more interested in taking home physical items rather than memories so why fill up the park with aesthetically pleasing creations? Instead they can introduce bigger rides in order to allow for pictures. They can even put a super-sized mall within their park in order to establish a collection-type phenomenon surrounding Disney products in China. The text refers to this strategy as “International Market Segmentation.” A list of reasons is given by Kotable & Helson for the segment approach, and the first one is “Identifiable – The segments should be easy to define and measure.” A country like China certainly calls for this approach because of the potential dilution of brand image, however by keeping the Hong Kong Disney defined as just that – Hong Kong – the brand in the United States will be unharmed.

Hong Kong Disneyland’s main competition is Ocean Park, a “homegrown” theme park. First Disney must recognize the advantage that Ocean Park has over them. Ocean Park has an advantage in that it understands the battlefield, so to speak. It is a Chinese company and it understands the expectations of its consumer. There is brand recognition and a little bit of loyalty since it was established in China. They have a popular educational segment which bodes well with the Chinese and generally provide a good overall experience for the price. They are recognized as the best way that Disneyland can separate itself is through differentiation – they have to make their product unique. Another way that they can address competition is by going after a different part of the market. As stated on Ocean Parks website, a midweek ticket is 320 HK which translates to about 40 bucks in US dollars. A potential opportunity might be to offer Disneyland as the premium option. At 40$, Ocean Park offers a pretty cheap admission and there is not much room to beat their price, however by offering upscale restaurants and shops, Disneyland can capture the upper echelon of tourists. Through differentiation and a focused market, Hong Kong Disneyland can coexist with the large and established Ocean Park. 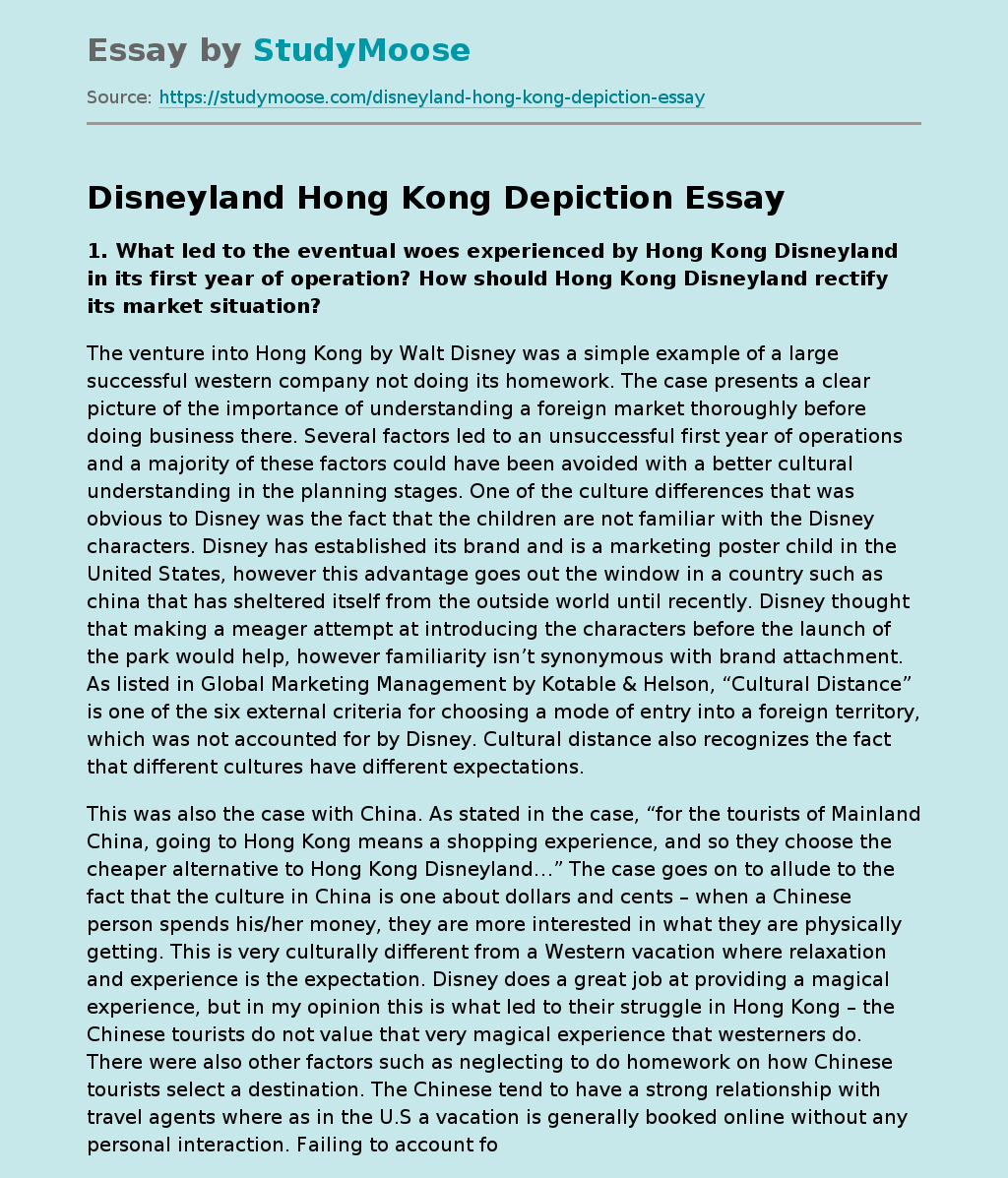