Analysis Of The Movie Too Big Too Fail

The movie Too big to fail is about the economic crisis in 2008, where everyone can see how some decisions made affected the different people involved in the economy of the U.S. Throughout the movie there is an ethical dilemma that was always present. Paulson wanted to stop the crisis in any way no matter what they had to do even if they had pass over the law. In the movie, the case of Bear Stearns already passed and now the turn was for the Lehman Brothers Company.

Don't use plagiarized sources. Get your custom essay on
“ Analysis Of The Movie Too Big Too Fail ”
Get custom paper
NEW! smart matching with writer

In the case of Bear Stearns, Hank Paulson takes the decision to act and save the company. Fuld, Lehman Brothers CEO thought that the company was also going to be saved by the government, but this time Paulson didn’t want to do it because every CEO had to take responsibility of their actions. In this way he wants that everyone has an ethical behavior in the development of the economy.

Another dilemma can be seen in the negotiations of Lehman’s Brothers and the Koreans where Fuld didn’t want to sell the shares at a low price without thinking that this didn’t affected just him, but the entire market.

In this case doing the right thing people has to sacrifice something; Fuld didn’t think how big the problem for the rest of the economy was. Another big dilemma in this crisis was the fall of Fannie Mae and Freddie Mac. The Chinese and the Russians could collapse the U.

S economy if Paulson didn’t take actions about Fannie Mae and Freddie Mac. That is why he decided to save the company and the government took control of it. This showed how Paulson contradicted himself of what he said about the case of Lehman Brothers. This was not the only thing that happened. Also AIG was in problems and Paulson decided to act making that Paulson lose credibility in some way, but did everything in his hands to save the economic crisis of 2008.

Henry Paulson and Ben Bernanke had to do something about the crisis. With Bernanke, Paulson decided to go to the congress and ask for $700 billion to save the economic system of the U.S. The congress decided that this was not possible, and they had to consider other options. Paulson decided to apply something of the bill passed by the congress. They had the option to inject capital to the most important institutions of the economic system of the U.S. Paulson didn’t agree with this idea because every time, as the CEO of Goldman Sachs, he fought against the inclusion of the government in these institutions. Against his personal beliefs, Paulson in some way ordered the financial institutions to accept the injection of capital to create confidence to the customers and in some way save the economy of the U.S.

For me this decision made by the U.S Department of Treasury and the Federal Reserve was the correct one for that “Second Great Depression” if all the financial institutions collapsed. Creating confidence in the customers and investors was something that they had to do to unfreeze the market. In the long run I think that the government will have to spend more and more money to solve the issues. This economic crisis will affect the entire world, and some first world countries have really a lot of problems. Maybe some emerging economies (like Latin American ones) would have another picture of the world and will be leading the world in the future. In this case I agree that Paulson and Bernanke took appropriate actions, even acting against Paulson’s personal beliefs, but thinking about the best solution for a country that was in risk of blowing out its entire economy. I agree that they decided to act and save the economy that is why I think they took the appropriate actions.

Analysis Of The Movie Too Big Too Fail. (2017, Jan 07). Retrieved from https://studymoose.com/analysis-of-the-movie-too-big-too-fail-essay 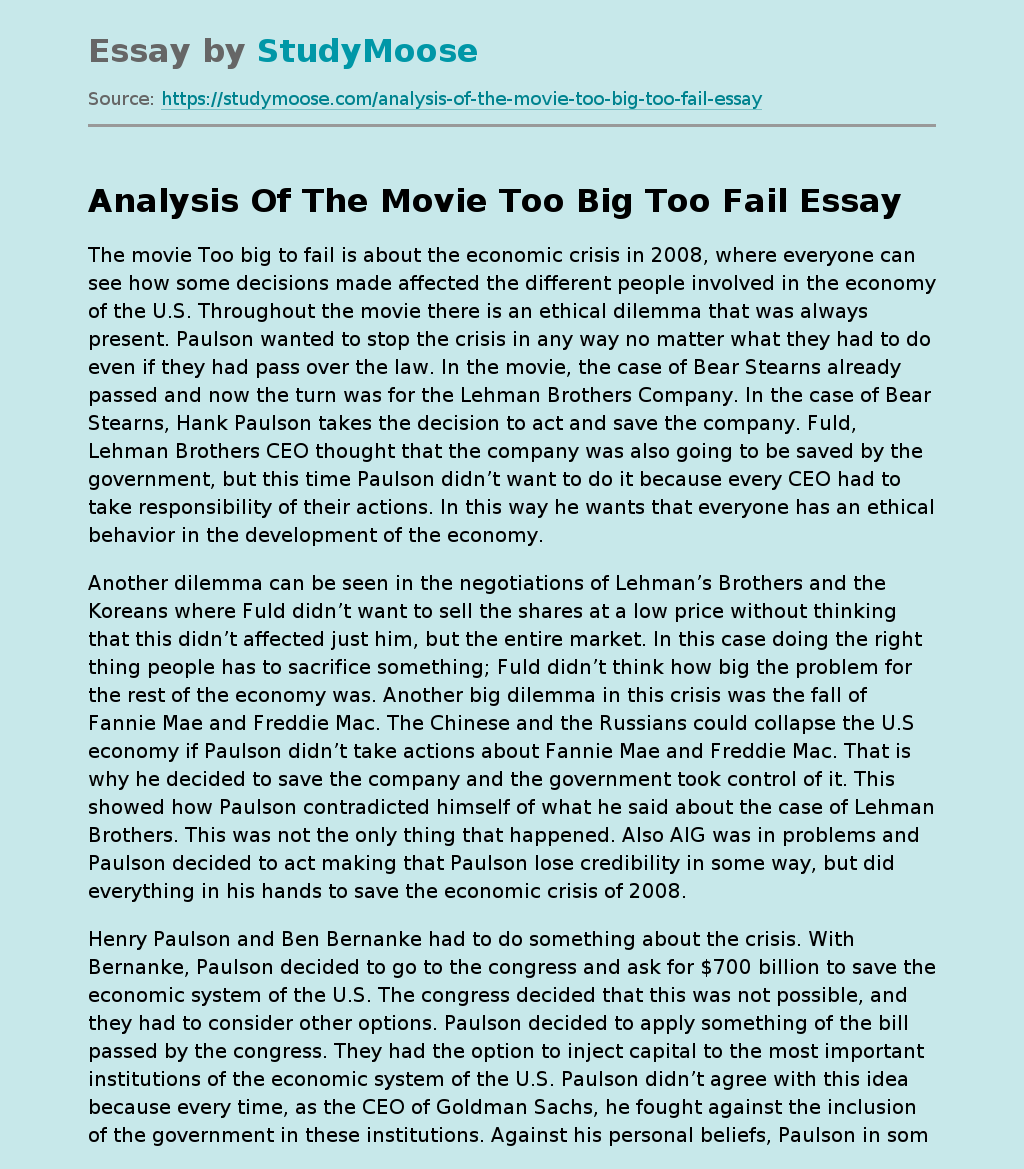