Fail to Plan, Plan to Fail

Those who fail to plan, plan to fail, or at least plan not to improve, according to the management literature. Look at school improvement, and there’s similar agreement pretty much across the literature that the schools that improve are the ones that plan. They establish a clear educational vision and consequent shared mission; identify goals or objectives that enable them to achieve that mission and thereby realise that vision; audit themselves, thereby identifying areas for improvement; and develop and implement educational programs on the basis of leadership 57 that audit that address areas for improvement n ways that help them achieve the mission.

Don't use plagiarized sources. Get your custom essay on
“ Fail to Plan, Plan to Fail ”
Get custom paper
NEW! smart matching with writer

That process, much of the literature suggests, is recursive or cyclical. The key in the school improvement literature seems to be that there’s a first step, identifying your vision and shared mission, that then informs the next step, the planning process of identifying goals or objectives aligned with the vision and mission. Whether you look at the management literature or the school improvement literature, at its simplest, goal setting is a way of asking what do we want, do we have what we need so that we can develop and implement what we plan, do our various goals elate to one another or are any in conflict, and is there anything we’ve overlooked, including internal and external blockers?

There, in 200 or so words, you have the whole easy-peasy school improvement planning story, and can stop reading and go and get that coffee right now.

The problem, if you’re still reading, is that planning and goal setting can sometimes lead to fragmented, uncoordinated programs with conflicting objectives that actually work against one another. Yes, setting specific, challenging goals, and developing and implementing educational programs to meet them can drive school mprovement, but as Adam Galinsky, author with Lisa Ordonez, Maurice Schweitzer and Max Bazerman of ‘Goals gone wild,’ in the 58 teacher june/july 2009 Journal of the Academy of Management Perspectives, told the Boston Globe’s Drake Bennett, goal setting ‘can lead to crazy behaviours to get people to achieve them. ’

‘We contend,’ write Ordonez, Schweitzer, Galinsky and Bazerman in ‘Goals gone wild,’ ‘that goal setting has been over- prescribed. In particular, we argue that goal setting has powerful and predictable side effects. Rather than being offered as an “over-the-counter” salve for boosting performance, oal setting should be prescribed selectively, presented with a warning label and closely monitored. ’ Tunnel vision To be fair, Ordonez, Schweitzer, Galinsky and Bazerman have their eyes set on performance management, and its tendency to an outcome orientation like a defined sales target, say, or reduced time spent on a process, rather than school improvement, and its tendency to the systemic development and implementation of programs. Nonetheless, people in a school who want to improve it will end up setting, or having set for them, some kind of performanceoriented goal. The message from Ordonez,

Schweitzer, Galinsky and Bazerman is that they should pursue that goal with care. Let’s consider why goals, as Ordonez and colleagues put it, go wild. The first reason, they argue, is that a goal might be inappropriate or so specific that in pursuing it, people ignore important elements of their behaviour, and maybe even their attitudes and values, that are not specified by the goal. ‘Suppose that a university department bases tenure decisions primarily on the number of articles that (academics) publish,’ they write. ‘This goal will motivate (the academics) to accomplish the narrow objective of publishing articles.

Other important objectives, however, such as research impact, teaching and service, may suffer. ’ Worse, say Ordonez and colleagues, referring to Barry Staw and Richard Boettger’s ‘Task revision: A neglected form of work performance’ in the Academy of Management Journal, goals can give us tunnel vision. In their study on the effects of goals, Staw and Boettger asked students to proofread a paragraph that contained both grammatical and content errors. They found that those asked simply to ‘do your best’ corrected both grammatical and content errors, while those who were asked specifically to correct grammar gnored content, and those who were asked specifically to correct content ignored grammar. The reason? Goals ‘inform the individual about what behaviour is valued and appropriate,’ argue Staw and Boettger.

The goal-setting problem, Ordonez and colleagues add, is that when we plan we tend to latch on to specific, measurable standards rather than complex sets of behaviours, and the attitudes and values that underlie them, precisely because specific standards are easy to measure and complex sets of behaviours are not. Command performance The goal-setting problem, essentially, depends n whether a goal is set by command or by consultation, negotiation or – horror – genuine collaboration. Goals set by command are, by definition, set by those with the power, whether you like it or not, to set them. The risk of such goal setting is that, first, it may lead to goals that are inappropriate or overly specific and, second, that leaders and their followers can be prone to what could be called target fixation or what Christopher Kayes, calls ‘destructive goal pursuit’ in Destructive Goal Pursuit: The Mount Everest disaster, to which Ordonez and colleagues also refer.

As they note, ‘Kayes identifies warning signs of leaders who have become excessively fixated on goals. These occur in leaders who express narrowly- defined goals, associate goals with destiny, express an idealised future, offer goal-driven justifications, face public expectations and attempt to engage in face-saving behaviour. ’ It’s a useful checklist to use to audit yourself or a leader in your institution, but remember, we tend to latch on to specific measurable things rather than complex sets of behaviours, and the attitudes and values that underlie them, precisely The goal-setting problem s that when we plan we tend to latch on to specific, measurable standards… because specific standards are easy to measure. leadership 59 because the specifics are easy to measure and complex sets of behaviours are not.

Performance anxiety Of course, one of the main planks of the education policy of this and the previous Commonwealth government is the standards agenda – the benchmarking of student achievement outcomes, which educators and schools then strive to achieve, and which at their worst could end up as ‘league tables. ’ Whether you’re a fan of the standards agenda or not, it’s clearly the mother of all oals in Australian education, and worth considering in terms of goal setting. Ordonez and colleagues have some interesting observations to make, particularly about what they call the serious side-effects of setting challenging or so-called stretch goals. These, they argue, can lead people to choose riskier strategies and to cheat, and can create a culture of competition that erodes cooperation.

That is, not only does goal setting irectly motivate unethical behaviour, but its introduction may also motivate unethical behaviour indirectly by subtly altering an organisation’s culture. ’ Handle with care If the bad news of the government-mandated standards agenda is that there’s a risk of a form of goal setting that creates a focus on ends rather than means, the good news for schools is that the school-improvement literature puts a premium on one thing that’s evident in the first 200 words of this story: collegiality. With any luck, your school- improvement planning process and the goals that you consequently set are the result of onsultation, negotiation and collaboration, not command and, if they are, chances are yours are learning goals, not performance targets. As Ordonez and colleagues observe, performance goals inhibit learning.

‘When individuals face a complex task, specific, challenging goals may inhibit learning from experience and degrade performance compared to exhortations to “do your best. ” An individual who is narrowly focused on a performance goal will be less likely to try alternative methods that could help her learn how to perform a task…. Overall, the narrow focus of specific goals can inspire erformance, but prevent learning. ’ As Edwin Locke and Gary Latham recommend in ‘Building a practically useful theory of goal setting and task motivation: A 35-year odyssey’ in American Psychologist, we should be setting ‘learning goals’ in complex situations rather than ‘performance goals.

’ The problem, as Ordonez and colleagues note, is that, ‘In practice, however, managers may have trouble determining when a task is complex enough to warrant a learning, rather than a performance, goal…. The goal of setting the right goals is itself a challenging affair. ’ Perhaps it’s time for a new axiom: those ho fail to plan carefully, plan at their peril. 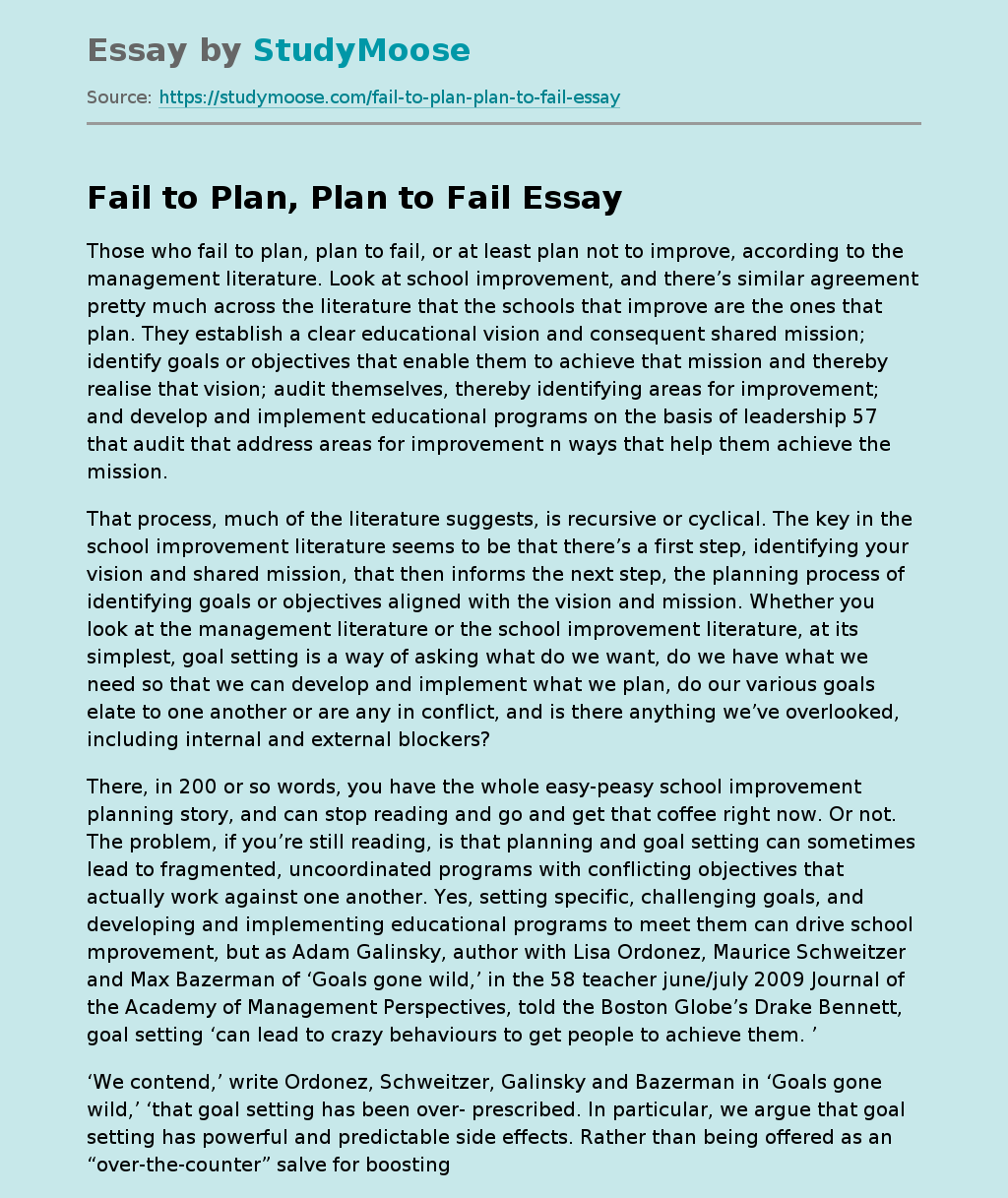