The Use of Pass/Fail System

The only thing that will give you as much heartache in school as love are grades (Colaba, n.d.). Throughout a student’s life in school, one is taught from society that the most important aspect in studies is to get good grades. Because of this, students’ motivation, learning, and even his or her personal progress are marginalized by the ‘ultimate goal’, which are the numbers use to evaluate one’s performance.

We could observe this even at a very early stage at school, first graders for example.

Don't use plagiarized sources. Get your custom essay on
“ Disadvantages of Pass-Fail System ”
Get custom paper
NEW! smart matching with writer

In the first grade, multiplication table is already taught and should be memorized and usually stars stamped at the back of the hands of the pupils are given as a reward for perfectly declaiming it. Of course, children would probably try to memorize the entire chart for the sake of getting stars. So what is now the motivation of the pupils? Instead of learning as their incentives, it would be the external reward.

It is because it would create a competition between the students on who would get many stars. It goes the same with the numeric grading system. It is how high the number, the grade and the praise one would aspire instead.

Students and society is so used to the grading system that it looks as if inexorable. As a result of it, students could not already perform without grades. Basically, it is the result of having the numeric grading system according to a professor from UPVTC.

So why not use the Pass/Fail system rather than numeric? With that, students could avoid the anxiety those five little words always bring.

Moreover, this Pass/Fail system would give students allowance for freedom within a pressurized environment and the reason why it is installed during 90’s on the first place. And having classes without any demands of distinguished grades would give a student a normal life in school. Better is one could escape the stress from aiming high grades. However, it still demands hard work to be able to pass. Still it needs involvement as student- participation, showing to the class, or merely do what regular students does. Perhaps at first there would be a more often attack of laziness because of freedom but in this case of situation, one could truly see that studies need focus and seriousness to really be able to pass as well as to learn.

Furthermore, students will be able to loosen their grasp to what grades have caused them. Like control their life at school and what is worse, let their ego shrink at times. When in fact you could learn to appreciate your courses and eventually learn them by heart not just because you need a shining grade. And through the pass/fail system, a student could indeed determine if the course truly interests him/her and if he/she would be willing to study and perform well even without grades. It is because nowadays, students are undeniably just doing school works because of the pressure of grades. Without grades, one could truly see the difference in viewing why people go to school.

Another is that through the grading system we are using, we learned to be reinforced by other aspects- praises of teachers, grades, or any external reward which is a mistake. We let grade motivate us rather than us motivating our own self. Is it not better that we reinforce our own selves rather than something doing it? It is because in situations like this, we get to neglect new learning opportunities especially knowing that there will be no grades involve. Most of the time or all the times, we turn our back on and merely disregard voluntary readings and others that are ask voluntarily because it is not reinforced in the past. Knowledge for its own sake is not seen as a valid and valuable goal (Colaba, n.d). Wherein knowledge should be treated as the real reward and primarily be the reason why people go to school, an internal reward better than externals. Internal reward which is to be able to acquire what you have learned would be the true essence of studying.

Perhaps others would say that it is better to have specific marks in transcripts so that higher grades would mean a white-collar job rather than merely seeing pass and fail. Well in reality, high grades do not really go with being a good and an effective employee. Numeric or letters in grading system is not equivalent to guts and skills. In fact, there were underdogs during their school years but became successful more than those best in class. It is just a proof that a success of a person does not depend on his/her transcript. Maybe just knowing if you have simply passed or failed in college or high school before is already enough for an assessment to be accepted in a job. For some, they would say that the numeric/letter grading system would make the parents proud if ever their child would get good grades. But what if their child cannot? With the pass/fail, one could escape expected range of letters and numbers by their parents. For sure parents would still be proud seeing the pass mark in their child’s record. In addition are those that would say that how could they stabilize their efforts if there would be no certain grade to be aimed?

The solution would be one should learn to organize and manage the time for studies. Do this sagaciously and learn to accept whatever would be the result of your efforts (Colaba, n.d.). And most of all love your craft. Probably the rest would say that it would be absolutely unfair to those who are best in class. At a certain point, yes it would be unethical to the best student in class because they would not get any appreciation anymore. But the question is how important it is to be acknowledged as the finest student? In a way, it would be used as reinforcement for one to maintain a good performance but again, this is just a part of an external reward. Knowing your certain rank would not mean recognizing your worth as a human being. And taking the idea that you are a better person because you could outshine others during examinations makes you a foolish person as supposed by Dr. Colaba, a professor in UPVTC. Moreover rank would not assure satisfaction, happiness, as well as one’s success.

Thus, pass/fail system is better than any numeric/letter grading system. A student could simply know whether he/she passed or not and there is no pressure. However this does not mean to discourage students about the present grading system or dispirit them to aim good grades. Maybe not until it would lead to anxiety and driving one’s ego. Anxiety does not help students to learn and in fact it is a destructive motivation. And letting something drive your ego instead of you taking control of it has never been good as well. The pass or fail system would definitely change one’s view in school. 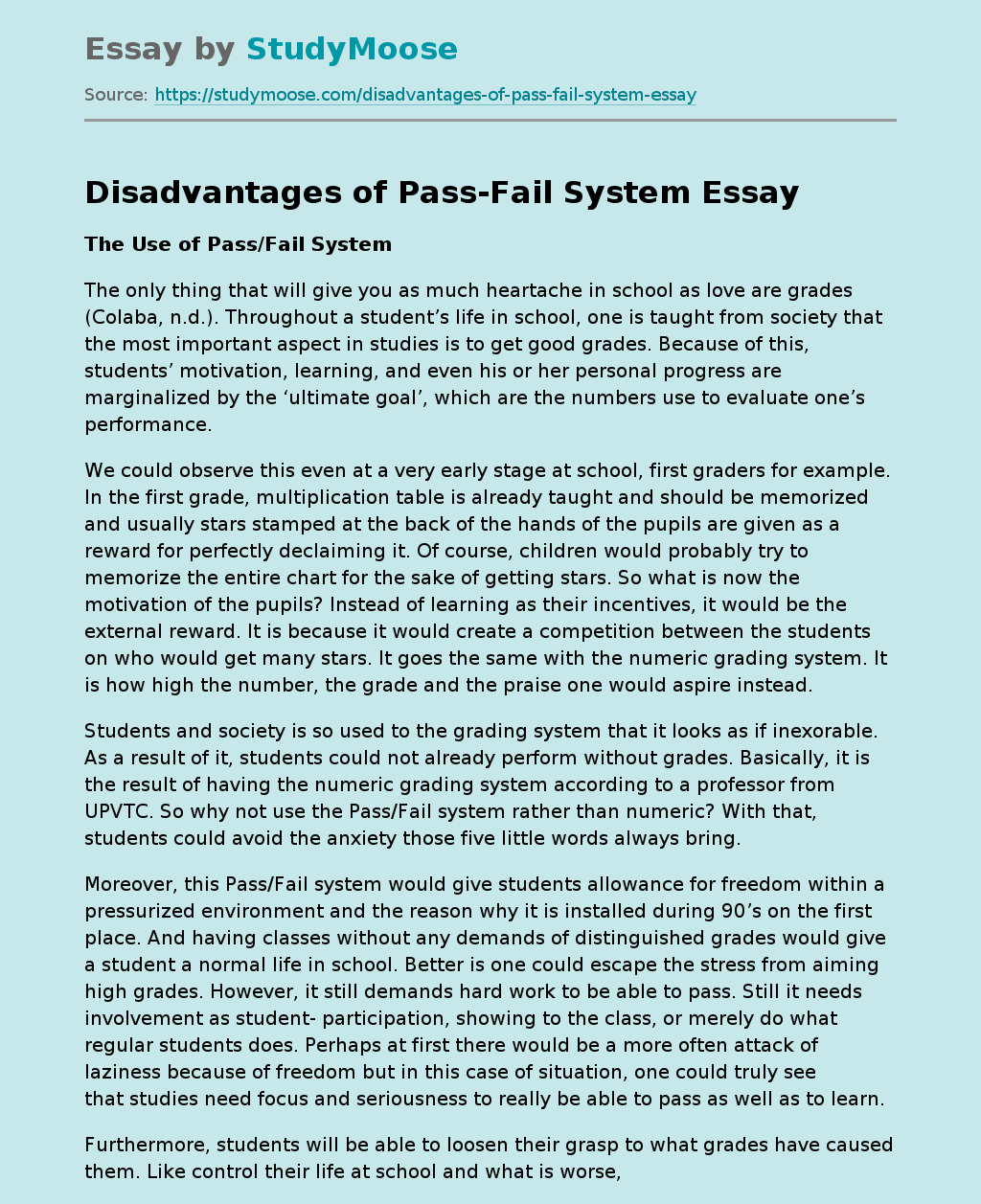