Why Did Texas Almost Fail as a Spanish Colony?

Why do the ventures of man fail? The ventures of men fail primarily due to a lack of planning. In the case of Spanish colonies in Texas this holds true. The Spanish first set eyes on the Texas coast in 1519 and in 1821 they lowered their flag for the final time in Texas. The Spanish had about 300 years to try and colonize Texas and the attempt to colonize and settle Texas was not very successful. The initial boats that came to Texas were shipwrecked and only four people survived of the approximately 270 men that made the trip.

Don't use plagiarized sources. Get your custom essay on
“ Why Did Texas Almost Fail as a Spanish Colony? ”
Get custom paper
NEW! smart matching with writer

One of these four survivors was Cabeza De Vaca. These were the first Spaniards to live on Texas soil. Cabeza had a goal to settle Texas and befriend the Native Americans. In reality, Spain was more interested in gold than in colonizing Texas. Cabeza made his way back to Mexico City and because of the information he provided, Francisco Coronado, A Spanish conquistador, was sent back north to search for treasure.

All he found were Indians living in relatively meager conditions. By 1607 the Spanish had a settlement in Santa Fe, New Mexico and the first Texas settlement was established in 1682 near El Paso.

By 1690 the Spanish became nervous of the French that were coming from Louisiana in the east and encroaching into east Texas. Because of the concern of this encroachment by the French, the Spanish decided to set up a plan to colonize Texas. That plan consisted of establishing missions near Native Indians populations.

Thus, the difficult geography, the weak missions, and hostile Indians were the main causes of the near failure of the Spanish colonies in Texas. The geography, primarily the distances between settled areas in Texas was a real problem for the colonization of Texas by the Spaniards. The Spanish were well established in Mexico City in the south and in New Mexico to the north. However, the distance from Mexico City and the missions in San Antonio was about 700 miles (Doc A). Also, the distance from San Antonio to Santa Fe, New Mexico was about the same distance of 700 miles (Doc A). These were the two closest developed areas to the new colonies. In those days, travel was primarily by mule train and it would take around two months to travel these distances (Doc A). These vast distances made it difficult for trade and made it expensive to transport needed supplies to the newly settled areas.

The expense of transportation between settlements lead to very slow economic development and without a chance to make a living people were just not willing to move to the new settlements. In addition to the distances, the land in the area was characterized by very rough terrain and with very little water (Doc A). Since travel was by animals pulling wagons the availability of fresh water was important in order to water the mules and horses. Also, the rough terrain made it slow and difficult for the wagons to travel (Doc A). Furthermore, the shallow depth of the water near the coast line of Texas provided an additional geographical barrier for colonization. The water is just not deep enough to bring ships close to shore (Doc A). The lack of deep water ports slowed development in Texas by the Spanish. In summary, this difficult geography lead to very little population growth in the Spanish colonies. From 1777 to 1821 the population in Texas for non-Indians remained at about 3,000 people (Doc B). Clearly, the area was not growing in population and geography was a major reason.

The weakness of the Spanish missions was another cause for the near failure of the Spanish colonies in Texas. In a nutshell, the Franciscan Friars had high hopes to convert the local Indians to Catholicism and make them Spanish citizens. In actuality, the Indians had little interest in becoming Catholics or Spaniards. In total, the Spanish established 29 missions in Texas (Doc A). However, only 12 of these missions were in active operation at the same time (class discussion). The population of Indians at the missions established in San Antonio actually decreased between 1756 and 1790. In 1756 the missions in San Antonio had 1,300 Indian residents and in 1790 the number of Indians residing there dwindled to 495 (Doc B). The King of Spain sent an inspector, Nicholas de Lafora, in the year 1766 to check up on the missions and settlement activities. He sent a bad report back to the King. His inspections of Mission of Nacogdoches, the Mission of Los Ais, and the Mission Nuestra Senora de la Luz, indicated that the Friars had failed to convert the native peoples to Catholicism (Doc C).

The grand idea of building missions, converting the locals, teaching them to farm, and ultimately making them productive Spanish citizens just did not come to pass as planned (background essay). Based on the low number of Indians living in the settlements and lack of converts it is evident that the mission and presidio model for establishing colonies in Texas was just not working. The Indians were not interested in living in the colonies. Not interested in becoming Catholics and Spaniards and they were actually hostile towards the Spanish. The land areas to the west of the Rio Grande River and to the north east El Paso were inhabitated by the powerful and numerous Apache and Comanche Indians. There are numerous documented attacks on settlers around San Antonio and La Bahia in 1776 (Doc D). For instance, on April 23 of that year settlers were killed at both La Bahia and San Antonio.

The raids and attacks continued through October with many settlers killed and horses stolen (Doc D). The Indians outnumbered the settlers with approximately 23,000 Indians living in this area and only about 3,000 non-Indians in this region as settlers (Doc B and D). Clearly, having hostile neighbors that killed settlers and stole horses was a detriment to the Spanish colonies in Texas and lead to their near failure. Bad reports from Lafora certainly did not lead the King of Spain to feel good about Texas and the continued support of missions and presidios (Doc D). Unfortunately for the Spanish, the Geography of Texas, the weak missions, and the hostile Indians made it difficult to colonize Texas and bring it under Spanish control. The settlement of Texas by the Spanish was a poorly planned activity.

The Settlements were just too far from the well-established Spanish cities to make for good economic development. The geography was too rough, the Gulf of Mexico too shallow, and the lack of fresh water made it difficult to develop this land. The inability of the Franciscan Friars to establish strong missions and convert the Native Indians to their ways was also a hindrance for settlement. Finally, the hostility of the Comanche and Apache Indians towards the Spanish settlers proved to be just too much for the successful settlement of Texas by the Spanish. The Spanish just did not plan adequately on how to overcome these roadblocks to the successful colonization of Texas. In 1821 the Spanish gave up when Mexico claimed independence from Spain.

Why Did Texas Almost Fail as a Spanish Colony?. (2016, Aug 26). Retrieved from https://studymoose.com/why-did-texas-almost-fail-as-a-spanish-colony-essay 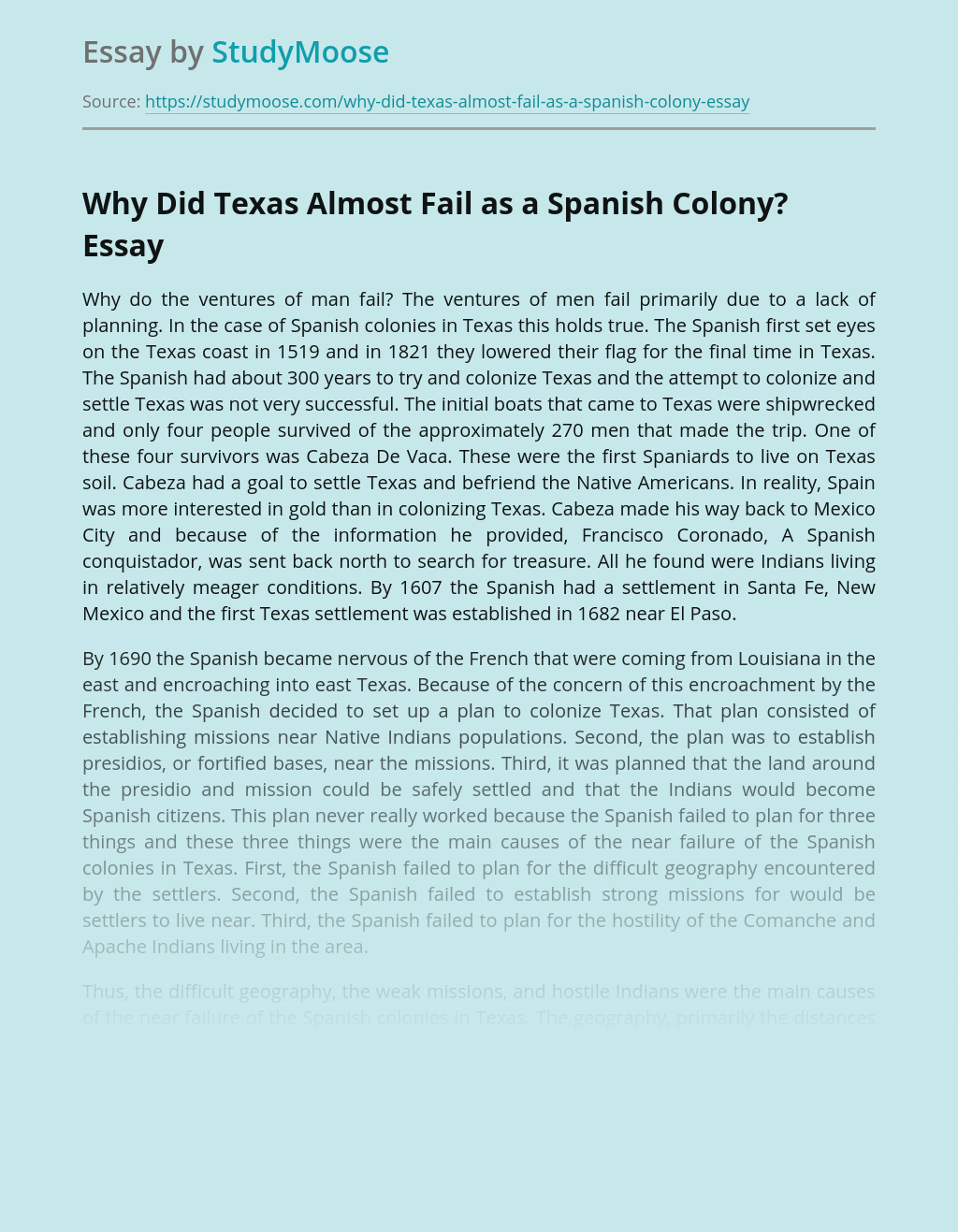