Definitions are meant to help us understand different concepts all around us. A definition allows us to communicate something that needed to be said. According to the Oxford English Dictionary, the definition of the word definition is “the action of defining, or stating exactly what a thing is, or what a word means” in a sense where it will help us understand its meaning.

Definitions provide insight to the meaning of something. At times we may feel like we know a word but cannot clearly come up with a way to define it and that is when definitions come into play providing clarity for a word.

Don't use plagiarized sources. Get your custom essay on
“ Courage can be applied and used in almost every aspect of life ”
Get custom paper
NEW! smart matching with writer

They help us understand everything around us, from peoples ideas to their feelings, to all sorts of concepts of ideology and life. Without definitions we would not know what anything would be, mean, act for, and so on. Definitions are an essential part of life that helps us cope with many things by helping us understand a broader perspective of objects and ideas.

As a freshman in English class, one of our assignments was to read “Solitude and Leadership” by William Deresiewicz which is an extended definition of the words solitude and leadership. William Deresiewicz used different methods to define the two words including quotes, examples, characteristics, and reference to Heart of Darkness by Joseph Conrad, which in my case was one of the hardest novels I had to read.

One of the definitions Deresiewicz gives us is “solitude means being alone, and leadership necessitates the presence of others”, both words contradicting themselves.

Deresiewicz uses a series of characteristics to define the words, which included words such as courage, independence, thinking, creativity, honor, concentration, honesty, introspection, friendship, and morality among others.

Courage was one characteristic that stood out to me. Courage can be interpreted in many ways. According to the Oxford English Dictionary one way, courage is defined as “the heart as a seat of feeling, thought, etc.; spirit, mind, disposition, nature.” Another definition that was provided was that courage is “applied to a persons spirit” and yet another definition was “spirit, liveliness, lustiness, vigor, vital force or energy.”

All three definitions contained the word “spirit” in them, and I believe that ones spirit is really important in relation to courage because it is what keeps us going. I can say that courage drives our spirit because without courage we would not do the many things that we have done and will do. For example, we would not talk to someone we really like without having the courage to go up to him or her right?

According to the essay by Deresiewics, there is two types of courage one being “physical” which he says we “all possess in abundance” and “moral courage”, which is the courage that allows us to “stand up” for what we “believe” (175). Courage drives us to the many things we do in everyday life whether it is something simple like having “the courage to argues” our “ideas” or something adventurous like skydiving (175).

To myself, courage contains some of the same characteristics, but I can out it into different words. Courage is a quality of mind or spirit that leads one to make certain decisions. Defining courage this way makes much more sense to me. Courage is very important because without it we probably would not be in certain situations we are in.

For example, without courage I would not be three hundred ninety four miles away from home all on my own living with someone who was once a complete stranger to me. I believe that that took tons of courage from me. Without courage many of us would not be away home our homes starting our college careers, which will prepare us for our future careers. Courage is a drive one must have to keep our spirit going.

As a freshman in college, I have set goals that I hope to achieve by the end of the year. I believe that courage can help achieve many goals. For example, one of my goals is to leave here with the courage to take up more rigorous classes next year. Taking up more challenging courses is definitely going to require courage because college can already be difficult for some and taking up more can be a harder task.

Another goal I wish to accomplish is to learn from all that will be done this year and apply it to the future. This goal can also take a bit of courage because learning from mistakes and applying the experience onto the future can be difficult. Courage is a really important characteristic to contain. No matter what age or situation, courage is extremely important, just having the mentality of wanting to do something and being able to do it says a lot about a person’s character.

After reading the “Solitude and Leadership” I suddenly realize that there are many things that take part in building character. Courage goes a very long way. It helps us decide on certain ideas, gestures, etc. Being able to take the essay and go onto defining a word in my own terms, like in the essay, took courage because many people can judge my ideology but having that courage the author spoke about and arguing for my own idea took courage.

Courage can be applied and used in almost every aspect of life. Sometimes all you need in life is a bit of courage to get you through a certain situation in life because “at such moments, all you really have is yourself” (182).

Courage can be applied and used in almost every aspect of life. (2016, May 29). Retrieved from https://studymoose.com/courage-can-be-applied-and-used-in-almost-every-aspect-of-life-essay 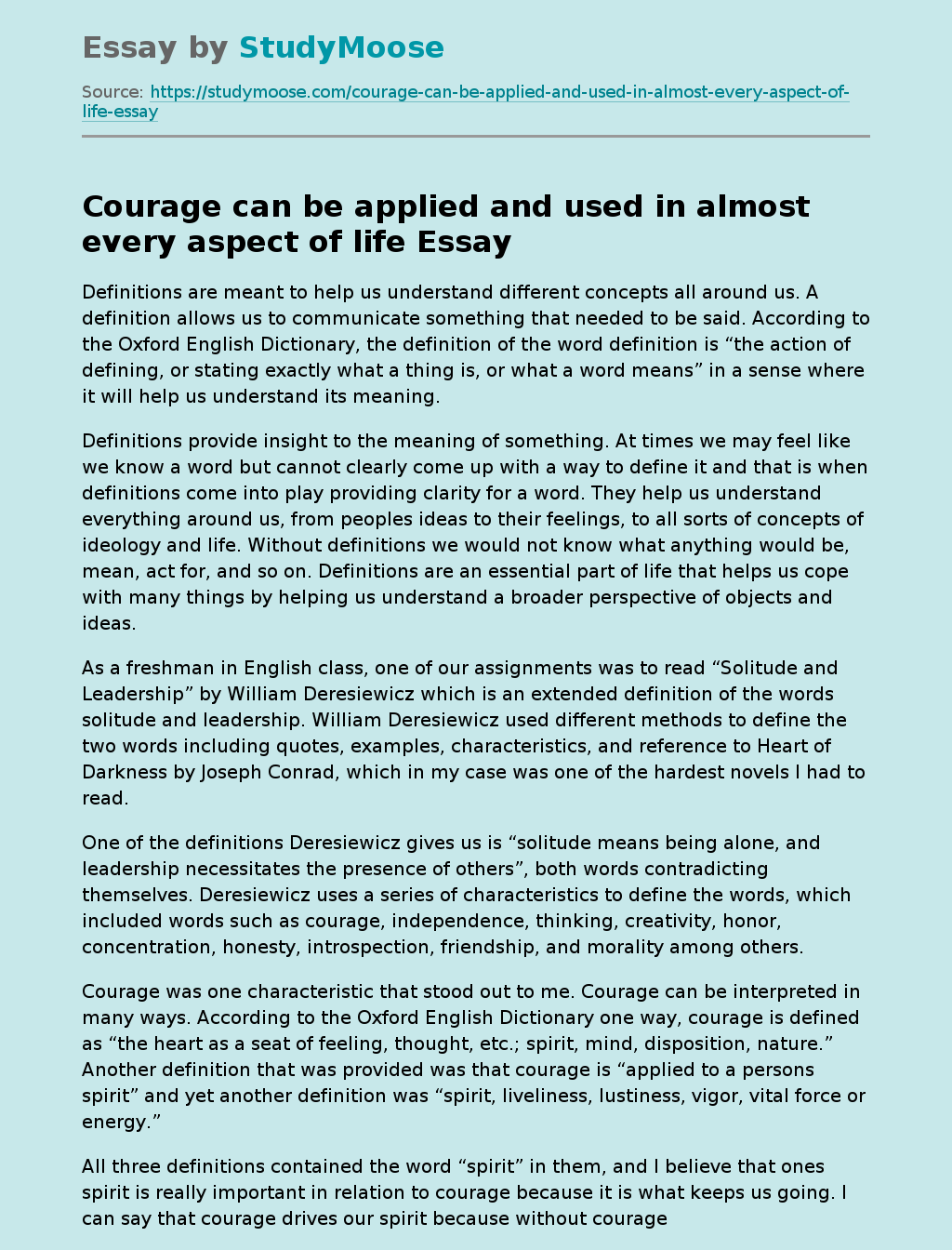